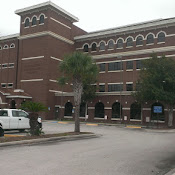 Wednesday morning, it was downright cold (at least for FL) with temps in the high 30’s, overcast and blustery! BRRRR! So why did we drive all this way from MA?

With the short week due to Thanksgiving, we thought the DMV might be busy so we got an early start.  Rather than making breakfast on board, to save time, we decided to have breakfast at Cousins Cafe in Green Cove Springs, just a short distance from the DMV.  Unlike most breakfast restaurants we have been to, you place your order at the counter (you are given a number to place on your table) and help yourself to coffee.  When your order is ready, your plate is delivered to you.  Food was okay, nothing great but service was good.

After breakfast we went to the DMV where we were given a number by the receptionist. Not busy at all! We had barely sat down when our number was called and we were directed to a window #4. We handed the woman (who was super nice by the way), our passports, our SS cards, 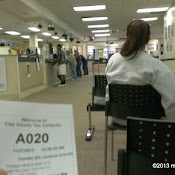 our MA licenses and our bank statements.  Luckily we had been misinformed about the bank statement needing to be in its original mailed envelope – there was no problem with the printed copy of the online statements that we presented.

A quick eye test and new photo for each of us and that part was done.  Did we want to register to vote in FL?  Yes, we could check that off the list. Next we handed over the title and proof of insurance to register the Odyssey in FL.  A quick walk out to the van for the inspection (by the same clerk) and that was done.

Since Rob had decided that he wanted a personalized plate with “VOLT DOC” (our business dba identity) it took a little extra time for the woman to fill out all of the information. Check that task done! The one remaining task was to renew the registration for the motorhome which was just about to expire, done! A very pleasant experience!

In little less than an hour we had our Florida driver licences in hand, registered to vote, had our van re-titled, applied for a personalized “tag” or license plate for the van and renewed the motorhome registration. The only unpleasant aspect was the cost – all of the above set us back about $660, the biggest chunk of that was to re-title and register our 4600 pound Honda Odyssey (cost is tiered by weight). Fortunately the majority of that cost is a one time deal. So yes fulltimer wannabe’s there is a cost to “move” to FL, but when we look at all the taxes we now don’t have to pay to our former state of residence (income, personal property, excise, real estate, etc.) it’s a bargain! Plus there are no vehicle inspections (at least not in Clay county) and no need to appear in person for most DMV related tasks down the road. 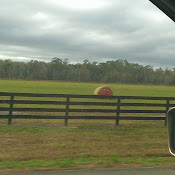 On our way back to the ranch, we stopped at a Publix grocery store to pick up a few things. On our way out, we noticed that they had a separate liquor store so we went in to browse.  We got talking to the cashier who asked us where we were from, where we were staying, if I was cooking on Thanksgiving, etc.  Without even asking our names, she pulled out a piece of paper and wrote down her name, telephone number and address and invited us for Thanksgiving dinner! Despite the number of trips we have taken down south, the southern hospitality never ceases to amaze us. Wow! 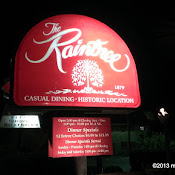 Since it was my birthday, we had made reservations for 6 p.m. at our favorite restaurant here in St. Augustine, The Raintree. On our first driving trip to FL, many years ago, Rob had picked this restaurant out of one of the tourist magazines. Service was great, food was awesome and the ambiance was quite lovely so now we 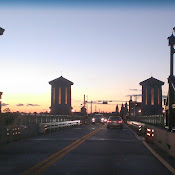 eat there every time we are in the area.  When we made the reservation, we thought that it probably wouldn’t be very busy since it was the night before Thanksgiving but boy were we wrong!

I had read that St. Augustine is holding their 20th annual 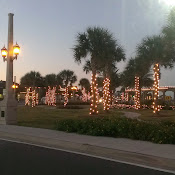 “Night of Lights” through February 2nd, so we decided to head downtown around 4:30 p.m. to see the lights. It was too chilly to walk around but 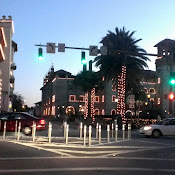 at least we could drive through the historic district. Most of the pictures I took from the car were blurry, although there were a few that came out decent, but they don’t really do justice! (Note, virtually all of our pictures are snapped with our smartphones as neither one of us likes to carry extra camera hardware around with us) 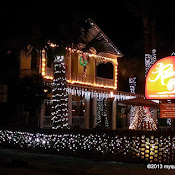 It was finally time to head to Raintree.  I was excited to be going out to dinner for my birthday – it usually gets overshadowed by Thanksgiving and all the festivities 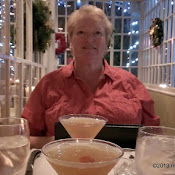 associated with the holiday.  It wasn’t real busy when we arrived but by the time we left, every table was full.

It seems that the menu has changed slightly – when we first started going there, most of the entrees were fairly expensive but now in addition to those more expensive items, they have sandwiches and salads, grilled pita pizzas, and a variety of seasonal specialties in the $10 to $15 price range. Perhaps with the recent poor economy they felt they 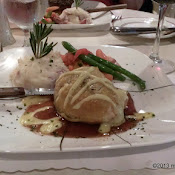 had to offer lower priced meals to be more competitive. 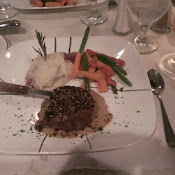 We hadn’t eaten since breakfast, everything sounded yummy so it was really tough making a decision.  I finally decided on the 6 ounce Brandied Peppersteak while Rob had Beef Wellington. Both were served with a spring mix salad with peppercorn dressing, mashed potatoes and a medley of vegetables. So good!

We should have stopped there but when the waiter handed us the dessert menu, we couldn’t resist.  I had a Bourbon Street Bread Pudding with Vanilla Ice Cream and Caramel drizzle while Rob had Warm Chocolate Dome Cake 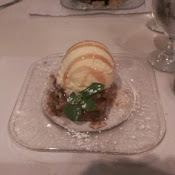 with Banana Ice Cream and Macadamia Nut Brittle. Oh, my, both 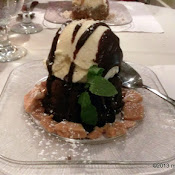 were so good but we were wishing afterwards as we waddled out the door that we hadn’t indulged. What a lovely and very special evening!

After all that food, we should have walked back to the coach but it was cold, it was far and after all I was another year older!