Ah, yes, it was March 28th and it was time to leave the cute little town of Bay St. Louis and head for our next stop Bayou Segnette State Park in Westwego, LA.  I think we must have a big black cloud following us because it seems that we usually have threatening weather on the days we plan to pull up stakes and move on! 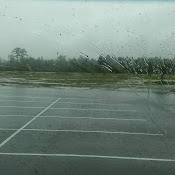 In the wee hours of the morning, we were awoken by Rob’s  chirping phone alerting us telling to flash flood warnings and severe thunderstorms. Yep, the boomers started along with the torrential rain. Sometimes listening to the faint sound of rain on the well-insulated roof of our rolling home can be very soothing, but not so much when it is torrential and accompanied by loud booms and flashes of lightning. Soothing can go to stressful in just a matter of minutes, at least for this particular coward.

After a somewhat sleepless night, it was still raining cats and dogs in the morning. Our drive was relatively short, less than 1-1/2 hours so we could slow roll it figuring maybe Mother Nature would work with us. Nope, she didn’t show any signs of mercy. So we prepared for our departure, me happily staying dry inside while poor Rob got soaked outside doing what he needed to do to get us ready. Around noon we were ready to hit the road.

Boy, oh, boy, they weren’t kidding when they talked about flash flooding! As we drove out of the 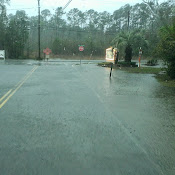 Hollywood Casino parking lot and onto the side street, along the side of the road, there were huge , er, no let me rephrase that, there were small ponds of water at least 5″ or more deep! Yikes! Rob, did you inflate our water wings???

We turned onto Hwy 90W which is a 4 lane divided highway. 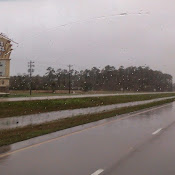 Traffic wasn’t bad despite the rather poor visibility due to the rain although it was a little slow going. It wasn’t long before we turned onto I-10 towards New Orleans. As we neared the city, the rain let up slightly but that was short lived.The rain would stop for five minutes, then there would be another torrential downpour.

In Marrero, we exited 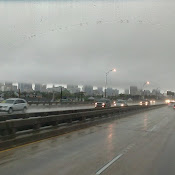 I-10 to Hwy 90-W/West Bank Expressway which was another 4 lane highway. Since this area was pretty congested with a lot of retail, we were wondering what the state park would be like.

As we pulled into the entrance, we stopped at the very small,  temporary 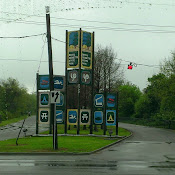 registration booth where we checked in. Straight ahead was a lovely, new registration office which is supposed to be completed very soon which will make the park employees very happy since it will give them a lot more room. In the meantime, I 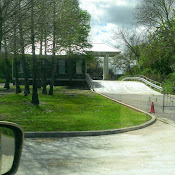 hope the two coworkers like each other! Tough in such tight quarters!

We had been to Nawlins back in 2010 (in the van) and had toured it extensively when we visited our friends, Jim an Joan who have a time share there. Since we hadn’t seen them since 2011, we figured this year would be a good opportunity to visit with them again plus we wanted to explore other parts of Louisiana.

Since this would be our first trip there in the beast, we had researched RV resorts/campgrounds in the area. We found that the private ones which were closer to the city were very expensive. Although we don’t mind paying a high rate on occasion as long as it is worth it, most of the reviews we read weren’t very favorable – roads were narrow, the sites were close together and in most cases, the location was in a less desirable area of the city.

Bayou Segnette had very favorable reviews so we decided to make reservations there. The other deciding 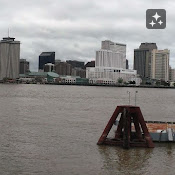 factor was that the state park was only 30 minutes from the Algiers Ferry which is a 10 minute trip across the Mississippi River to Canal Street – we wouldn’t have to deal with finding some place to park in New Orleans. Once we arrived,  we were quite relieved – we had made the right decision.

What a surprise! After driving through a fairly congested suburban area, Bayou Segnette is a lush green oasis with a lot to offer besides the campground – boating, fishing, canoeing, hiking, picnicking, playgrounds and swimming in the wave pool. 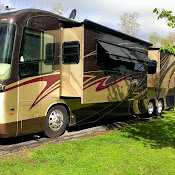 After checking in, we drove approximately one mile to the campground, passing by the road to the day use picnic area and wave pool and the boat ramp parking lot. After arriving at our site (#57), Rob once again masterfully maneuvered the coach into our back in site, thanks to the fairly wide paved roads.

The campground has 98 sites, all back ins with 50′ asphalt pads with water and 20/30/50 amp electric hookups (no sewer), a picnic table (depending on the contour of the land, some picnic tables are on a wooden deck), a pedestal grill and a fire ring. Sites are well spaced so you are not on top of your neighbor but there is little privacy due to the lack of shrubs between sites. Rates are $20 for Oct – March and $28 for April – September. 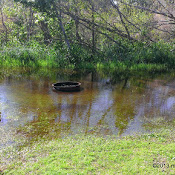 While the heavy rains flooded some of the low areas of the campground, including the rear part of our site where the fire ring was half submerged, the paved areas remained high and dry. 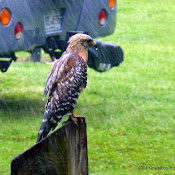 It was still early when we arrived but the weather was still lousy with the continued rain so we decided to stay put for the rest of the day. The hawk in the photo right was hanging out next to our site during a particularly heavy deluge. Luckily the sun did come out the next day – stay tuned for more about our stay here!