Imagine this landscape: a brilliant blue sky as the backdrop to dazzling red, white and pink 300′ majestic sandstone rock formations jutting out of the grasslands of the Great Plains and the magnificent silhouette of the 14,115-foot Pike’s Peak in the distance. 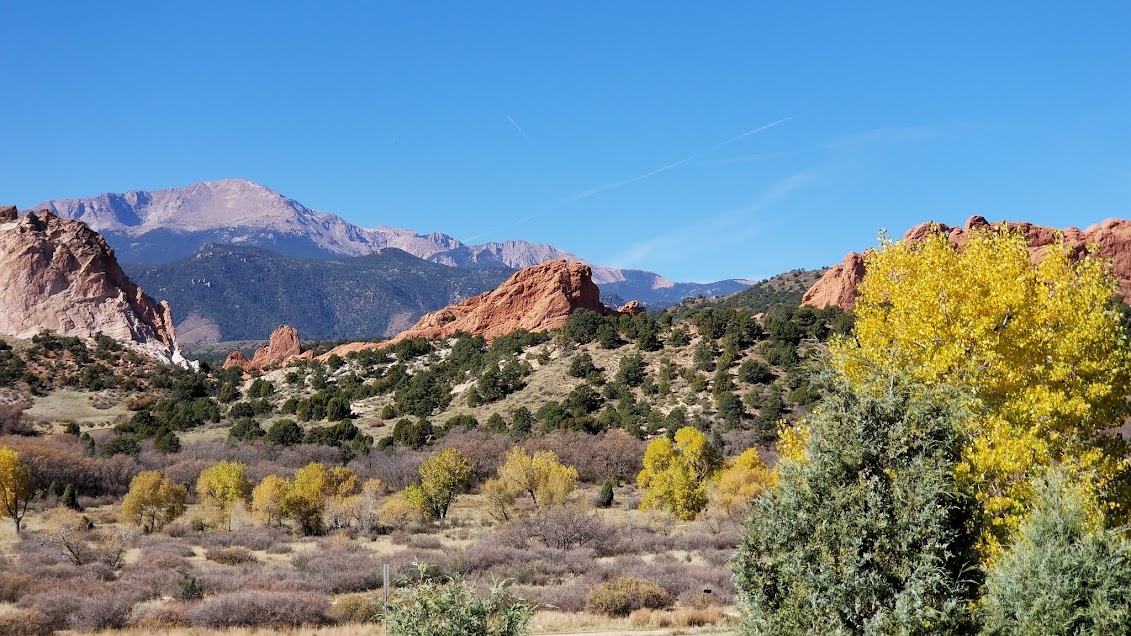 Ah, yes, this picture perfect piece of paradise known as Garden of the Gods, owned by the city of Colorado City, was our next sightseeing destination. But we didn’t just go there once or even twice, this is, after all, one of those magical places, similar to the Grand Canyon, that you simply

must visit multiple times to capture its essence at different times of the day under constantly changing skies. I lost count of how many times we drove through this park! Despite everything else we were doing during our short stay in the area, it seemed like we were always there, probably because of its close proximity (less than 5 miles) from where we were staying. Guess others think it is awesome as well – it was designated as a National Natural Landmark in 1971, recognized by the Department of the Interior as “a nationally-significant natural area.” 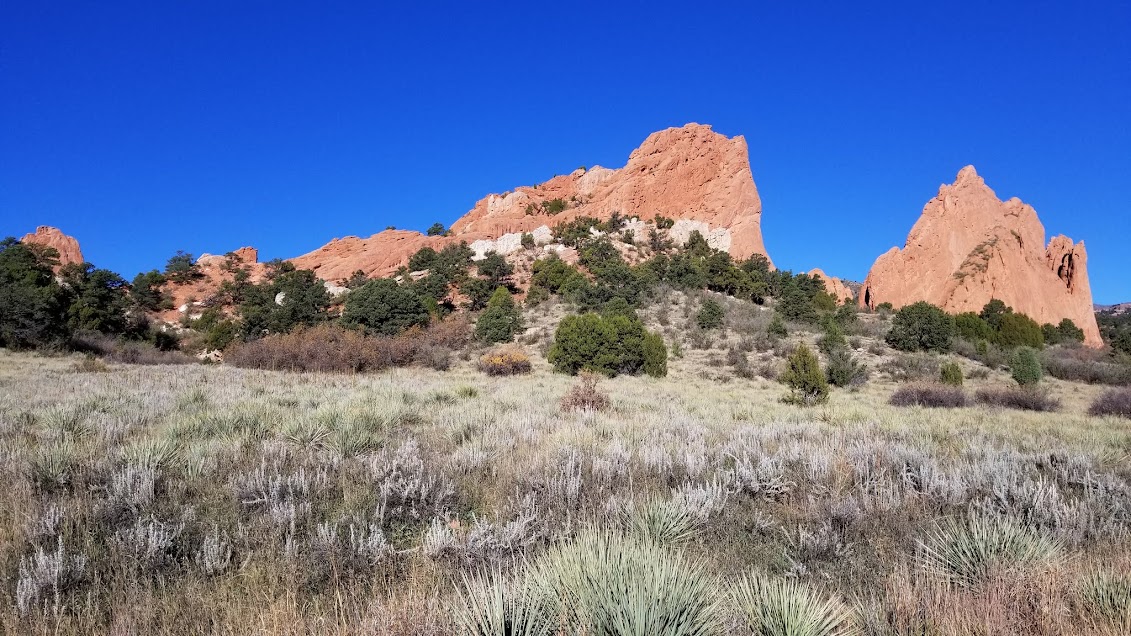 Maybe this is one of the reasons why it is the most visited city park in the U.S. This website states that “roughly two million visitors from all over the world visit the park every year. According to the Garden of the Gods Visitor and Nature Center, the visitation density at Garden of the Gods is 100 times that of the 265,461 acres of Rocky Mountain National Park.” Not only does the beauty of the landscape entice visitors but with it’s 15 miles of paved and unpaved trails, it has become a favorite spot for hikers, bicyclists and horseback riders as well. And for those who like more of a challenge, it is heaven for rock climbers from the inexperienced to the more advanced climbers. Sure glad we came here during the off season!

On this particular day, October 17th, (yes, I know it is December and here I am still writing about October!) it would be an especially busy one, crammed with plans to visit the Visitor Center, possibly take a trolley tour, enjoy an extended walk, then drive to nearby Glen Eyrie and if time 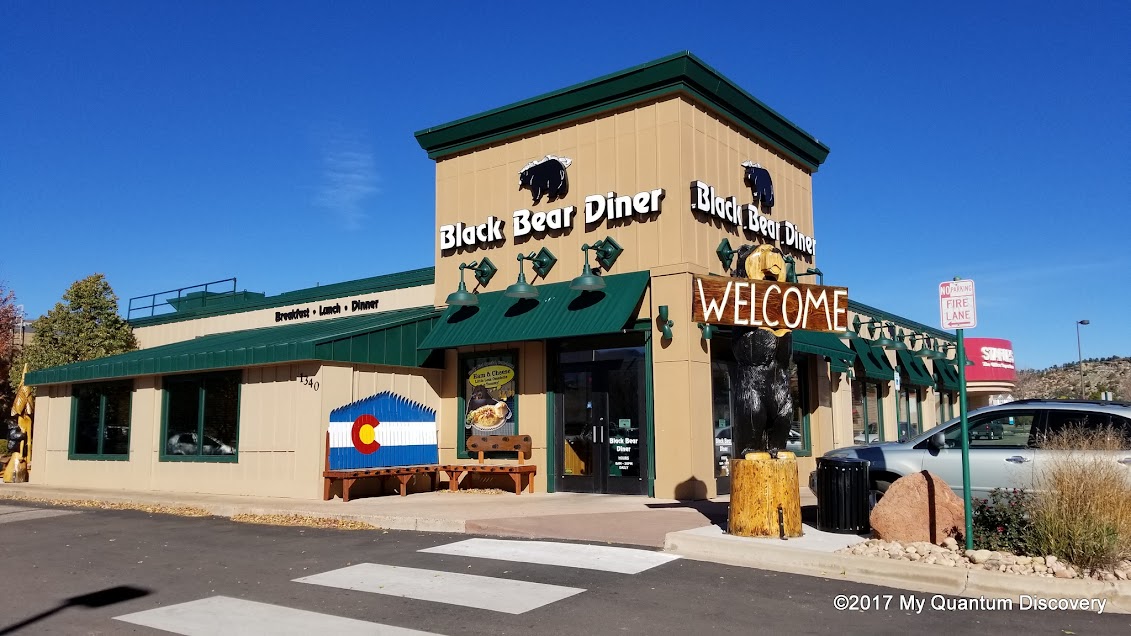 permitted even tour a cave. So with that kind of an itinerary, our day had to start with a hearty breakfast but of course you already knew that, right? Black Bear Diner in Colorado Springs had all sorts of delicious offerings on their menu. We didn’t know it at the time but this is a popular chain has restaurants in CO, AZ and CA (spoiler alert – we ate at several during our upcoming travels). Totally charming rustic atmosphere created by all sorts of bear decor throughout the restaurant. And the best part is that if you are not sure what meal you want, don’t worry you can have breakfast, lunch or dinner at any time of the day. How convenient! At the suggestion of our

waitress, we split a Grizz ($13.49) which had 2 sweet cream pancakes, 3 eggs, 2 slices of bacon, 2 sausage links & a ham steak, served with home fries. Splitting the dish worked out perfectly, even half the dish was almost too much for each of us. Can’t imagine that someone can actually eat all that food in one sitting! 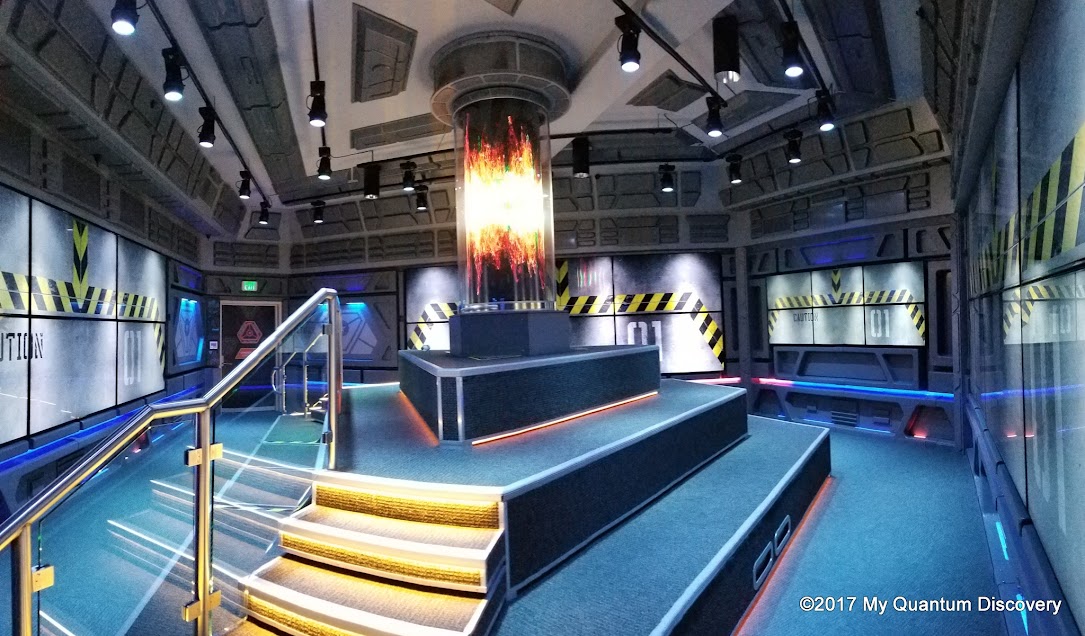 With our tummies full, we headed for the state of the art, world class Garden of the Gods Visitor & Nature Center where we spent several hours absorbing all sorts of information about the formation of the sandstone pillars. Through many of the interactive exhibits we learned that the towering spires were not carved by the deities but instead by the geological activity along a natural fault line and by the erosion caused by rainfall over millions of years. Although perusing all of the exhibits and reading all the text was quite interesting and informative, for those of us with short attention spans, it was much more exciting travelling through one billion 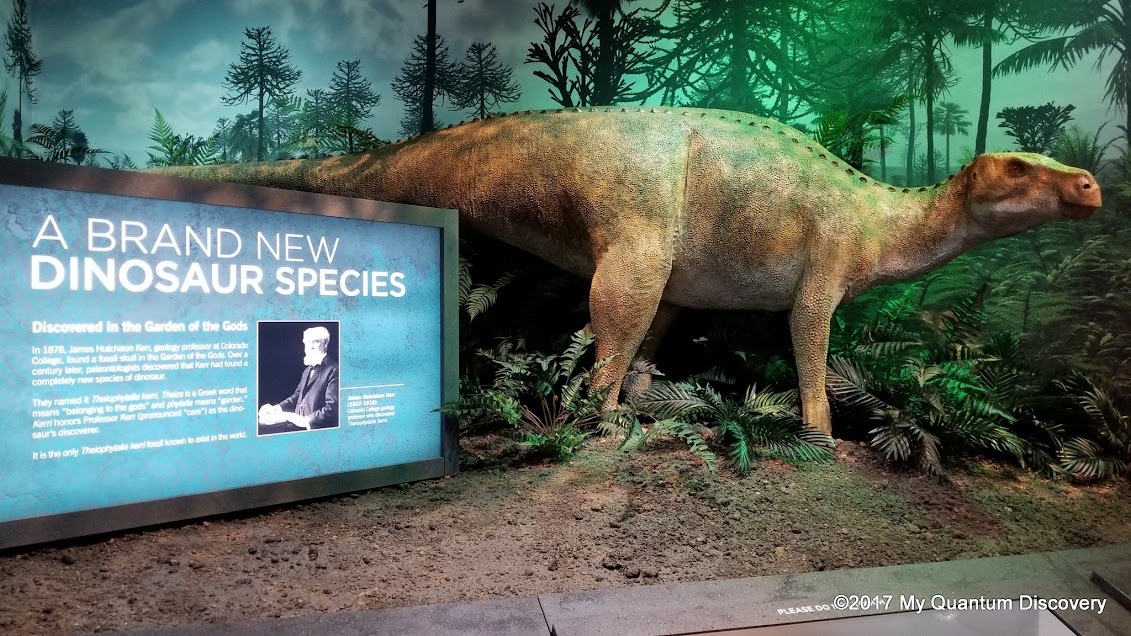 Another fascinating tidbit we learned was that in 2008 it was announced that the fossils of an entirely new species of dinosaur, Theiophytalia kerri had been found in the park. Read more details of the discovery here.  How very cool is that!

Our curiosity about how the park was named was also satisfied here. The story goes that when a 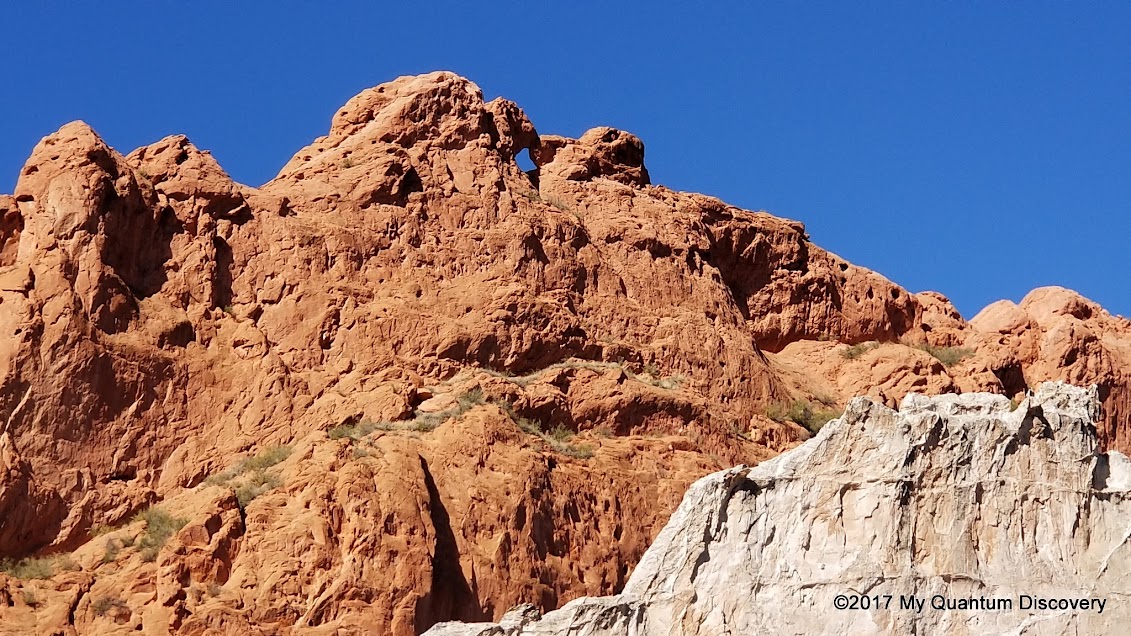 group of surveyors explored the site in 1859, one of them remarked that it would be a great location for a beer garden. His more poetic companion quickly responded that it was too beautiful to be a beer garden. It was a place fit for the gods, thus the name Garden of the Gods! 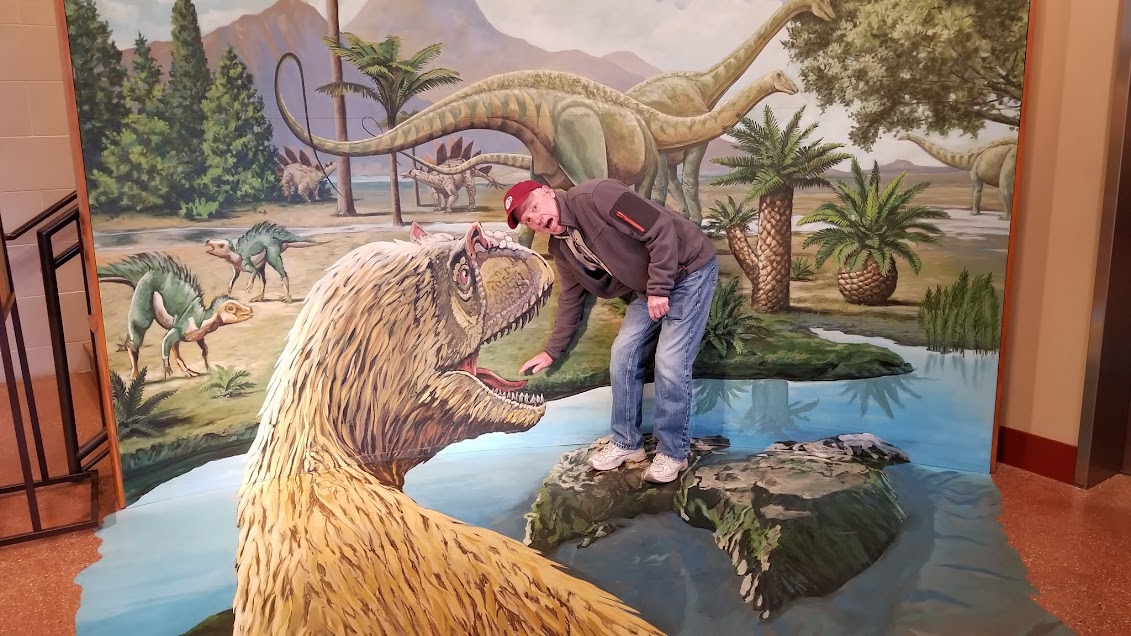 meter. All thanks to Charles Elliott Perkins, the head of the Burlington Railroad, who at the urging of General William Jackson Palmer, the founder of Colorado Springs, purchased two hundred and forty acres for a summer home in 1879. Even though he purchased more acreage over time, he never built on it, wanting to preserve its natural beauty for the public to enjoy. Although he died in 1907, his children honored his wish and donated his four-hundred eighty acres to the City of Colorado Springs. According to the Garden of the Gods website, “it shall remain free to the public, where 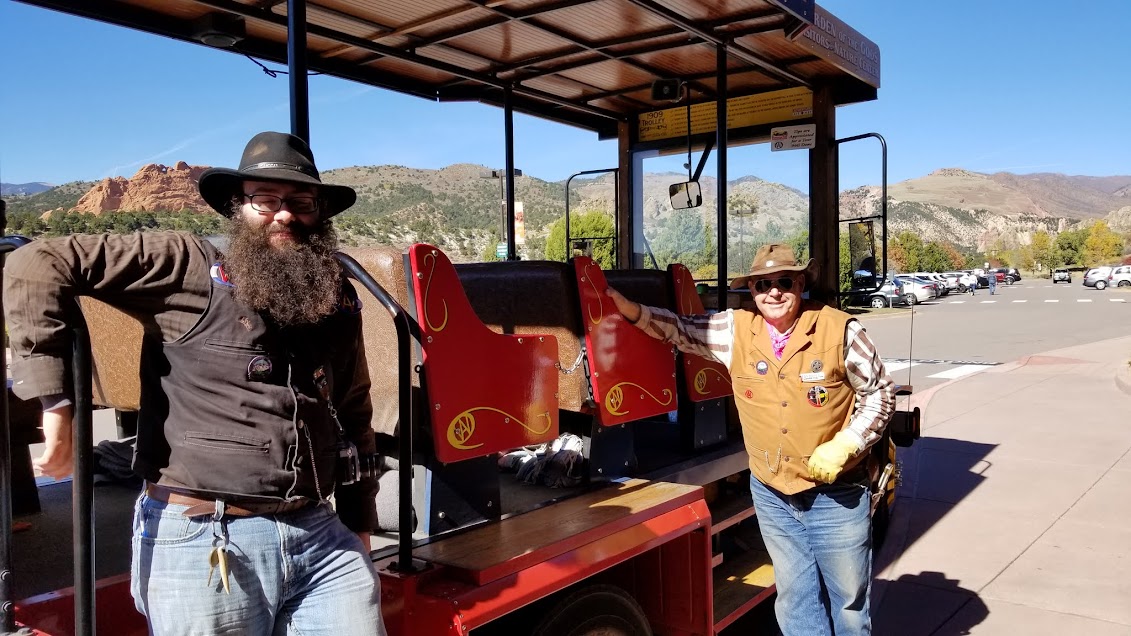 no intoxicating liquors shall be manufactured, sold, or dispensed, where no building or structure shall be erected except those necessary to properly care for, protect, and maintain the area as a public park.”  Since then, through other land donations, the park has grown to cover 1,367 acres.

1909 Trolley tour ($17.00 per guest). Even though we had driven through the park numerous times during our stay, we thought it would be fun (and cheaper) to ride in one of their custom-built open-air trolleys. These 45 minute tours depart hourly from 9 a.m. to 6 p.m. – tickets are available at the Activities Desk, no advanced reservations. Although there is seating for 14 people, except for another driver who was taking some pictures, we were the only touristas on board. 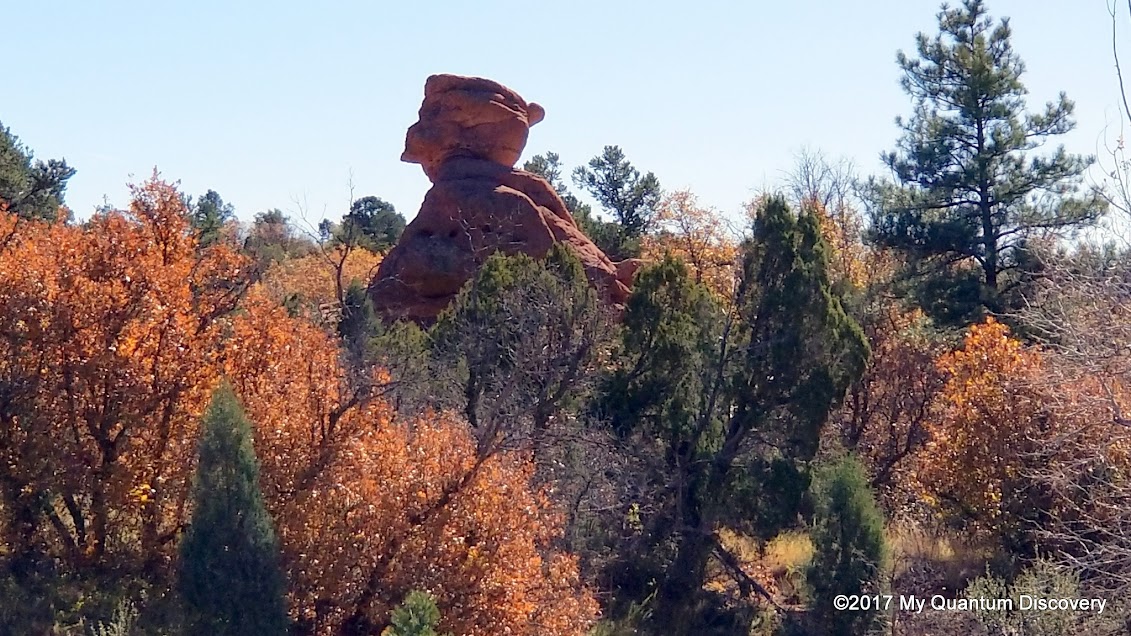 Plenty of room to move around which was great! Our tour guide was Curly who not only had a wealth of information about the history, geology and ecology of the park but also had an occasional joke and tall tale to tell. Although not allowed to stop the trolley along the way, while driving he was able to point out each rock formation, all with whimsical names such as Gateway Rocks, Tower of Babel, Cathedral Spires, Three Graces, Sleeping Indian, Siamese Twins, Kissing Camels, Sleeping Giant and Pig’s Eye. Our two favorites were the 700 ton Balanced Rock and the Scotsman which from one viewpoint looked like a man wearing a Scottish tam but from the opposite viewpoint looked like a Frenchman wearing a beret!

Curly also drove us by the Garden of the Gods Trading Post, Colorado’s largest, oldest (built in 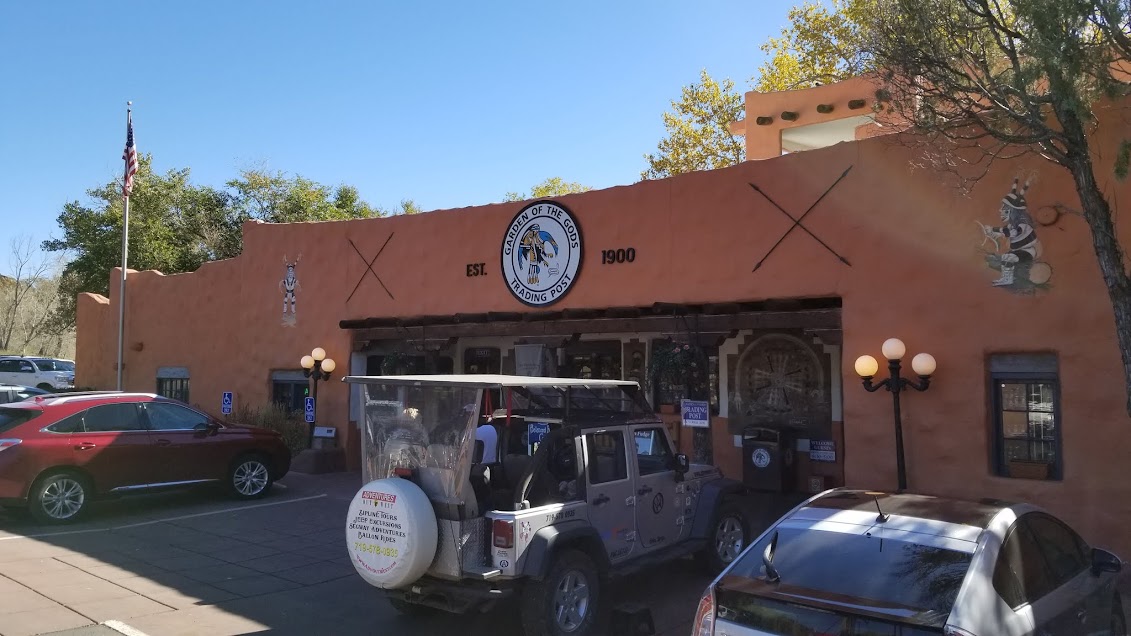 1929) and best gift shop and art gallery which we later visited. When the tour was over, as we thanked him and said goodbye, he suggested that we take a walk on one of the more popular trails – the Perkins Central Garden Trail and to visit nearby Glen Eerie where we might spot a herd of Longhorn Sheep. 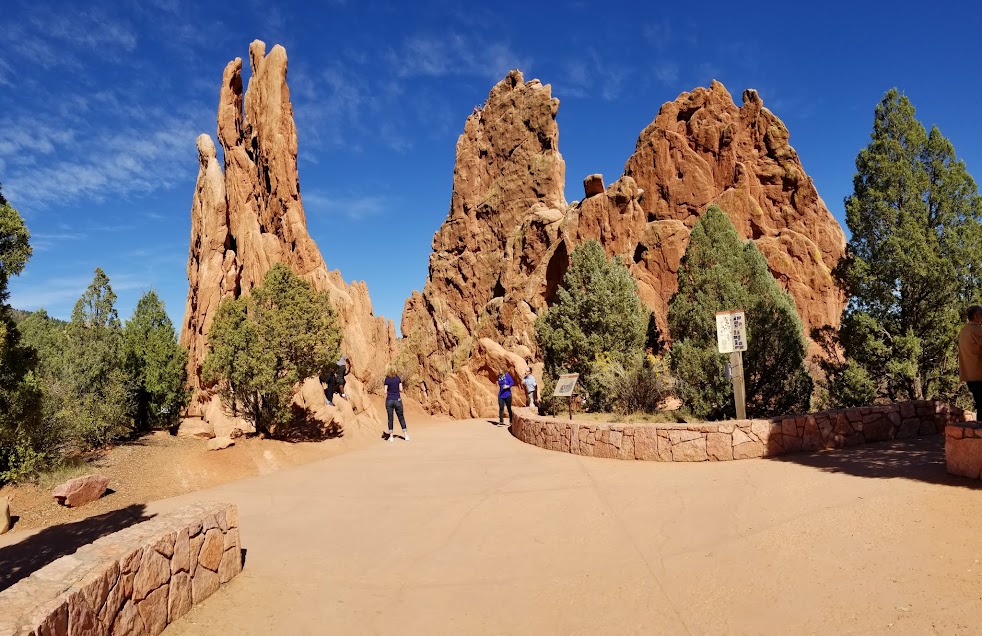 on the tour. This popular 1.1 mile paved trail allowed us to meander at our own pace past many of the formations that Curly had pointed out. At several spots we stopped to watch rock climbers who appeared to be taking lessons on the basic climbing techniques. Yike, not my cup of tea for sure! 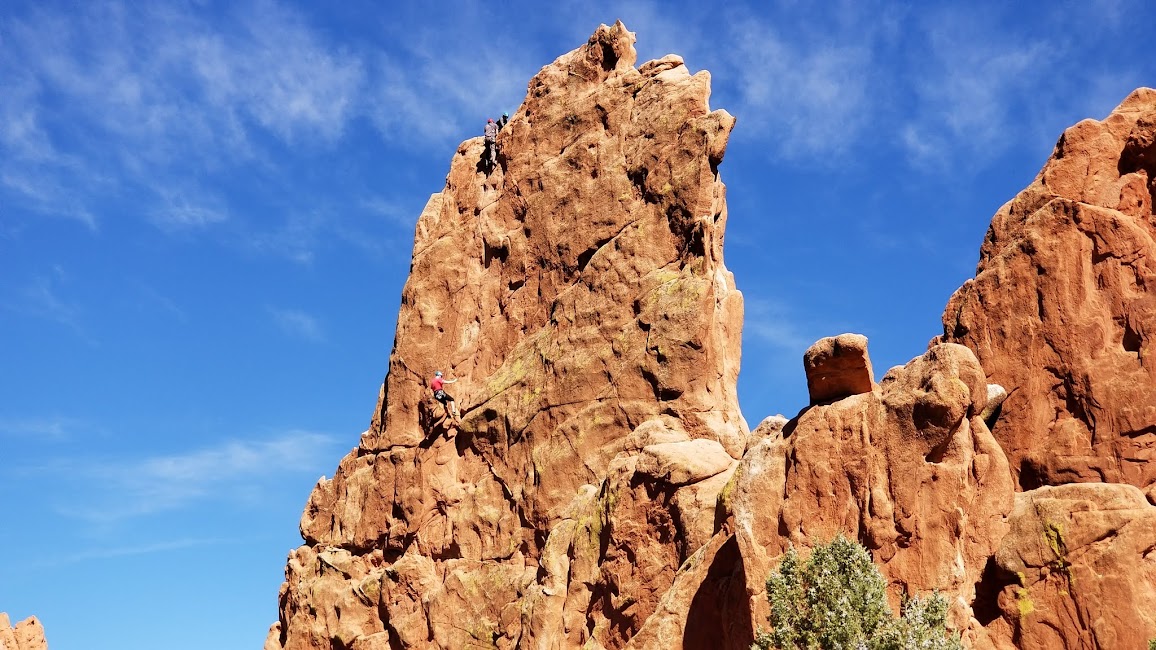 It certainly was a glorious day! Although we eventually finished our walk, we had more plans for the rest of the day but you’ll have to wait for our next post.