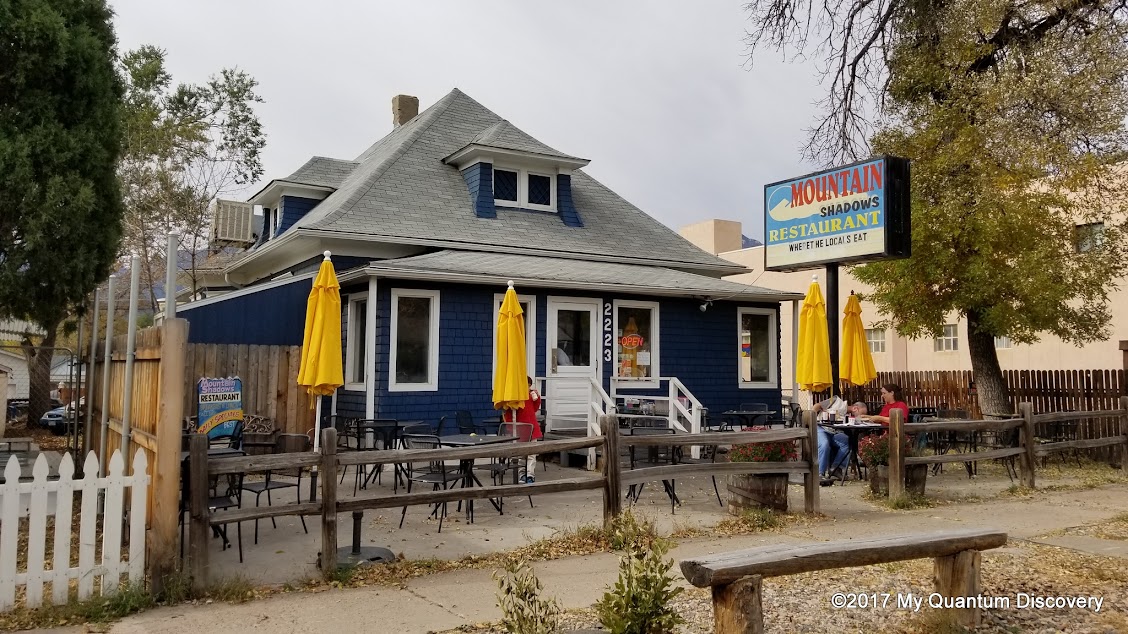 Another day meant another breakfast and more exhausting sightseeing! Sure I could have cooked us a nice breakfast (it may not seem like it but I do that quite often) but why make all that effort when we could dine at a breakfast joint featured in the East/West Flavorfest episode on Diners, Drive Ins and Dives, hosted by Guy Fieri. According to the Food Network’s website, the Mountain Shadows Restaurant located in Old Colorado City “won Guy over with its heaping portions of comfort food. The massive cinnamon rolls are made from a buttery dough that comes bathed in a decadent glaze that Guy calls ‘maple madness.’ And one monster of a 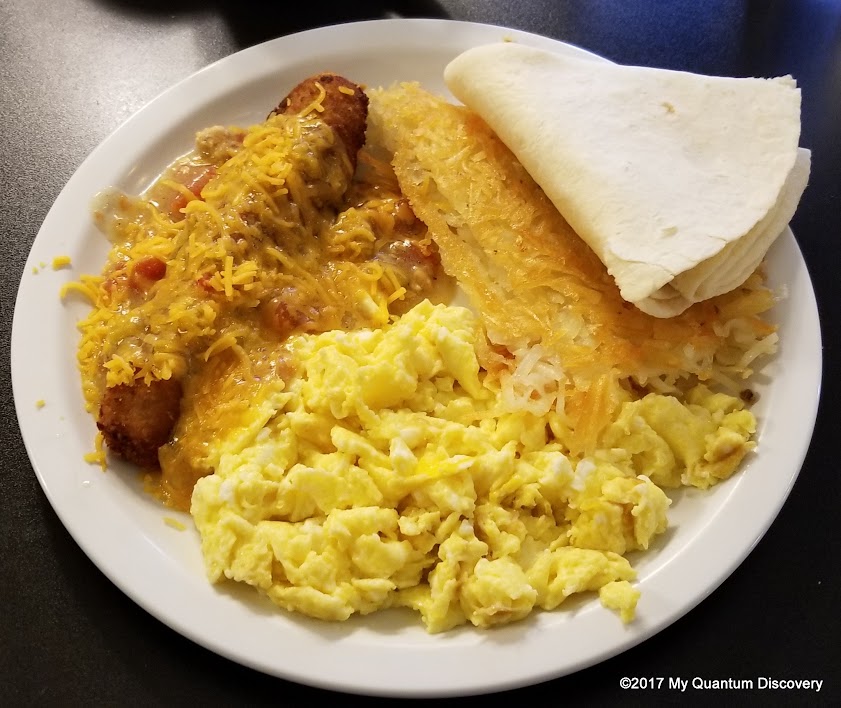 sandwich comes piled with cheese-smothered slices of roast beef, mushrooms and bacon.” Hate to disappoint but we didn’t indulge in the “maple madness”, no sugar overload for us. And since it was breakfast the monster sandwich didn’t grace our plates either! Instead, a healthier Veggie Omelette ($9.49) for me and a dish with a Mexican flare for Rob – Chile Releno ($9.99), a cheese stuffed, breaded and fried chile pepper, smothered in green chili, with two eggs, hash browns and a tortilla. Cute place with nice ambiance, good food and good service!

From there it was about a 20 mile drive north on I-25 to the visitor’s North Gate (Exit 156B) of the U. S. Air Force Academy. Okay, I’ll admit it, when our friends recommended a visit here, I was a little skeptical. With everything else we wanted to do in Colorado Springs, it quickly earned a place at the bottom of my must see list of things to do in the area. Despite the fact that I admire and respect the members of our armed services and am grateful for all the sacrifices that they and their families make to keep us safe and secure, I didn’t think visiting one of their academies would be all that interesting. Little did I know at the time that the Academy is one of the largest tourist attractions in Colorado, attracting approximately a million visitors each year. I guess the other 999,999,999 people must have known something that I didn’t! 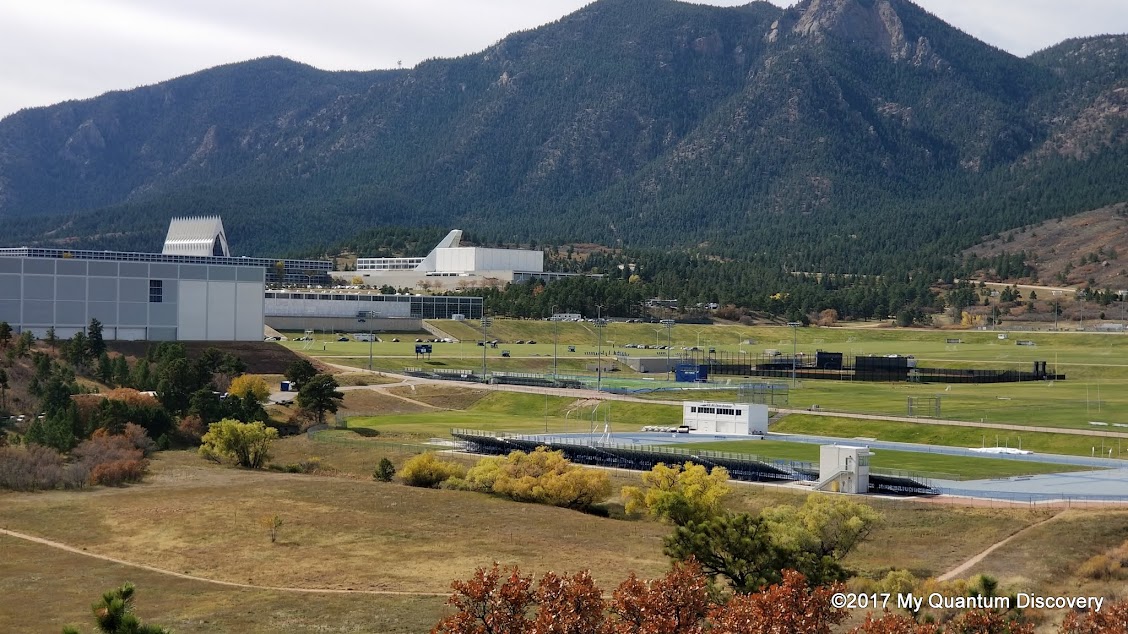 After passing through security at the North Gate, we stopped at a two marked overlooks which we later found out was part of the self guided Falcon Tour, a route that circles around the Academy, taking about 2-1/2 hours to complete. At the Academic Overlook, there is an excellent distant view of the campus. Several signs explained the military training programs, the phases of basic training and their leadership development program. At the Athletic Overlook, we learned that the goals of the athletic program are to enhance the physical condition of all cadets, to teach leadership and to build character.

The next stop on the tour was the Barry Goldwater Visitor Center. Built in 1986, this 31,600 square-foot building was named in honor of retired Arizona Senator Barry M. Goldwater, an avid supporter of the academy. What a beautiful facility!

Here we learned that the Academy which was established in April,1954 and occupies 18,000 acres, serves as both an air force base and an undergraduate college for officer candidates.  Approximately 4,000 cadets are currently enrolled as undergraduates in the academy with 723 faculty members.

In the center of the facility was a 5,652 square foot exhibit area which has a variety of displays, maps, a replica of a cadet’s room, a Falcon glider hanging from the ceiling, historical exhibits featuring information on the history of the Academy. Several exhibits focused on the four “pillars of excellence” which is part of their cadet training program: character development, academic, athletic and military training. One display was of a falcon which was chosen as the mascot of the Academy by the Class of 1959, the first to enter the Academy. The falcon was chosen as the mascot because of its speed, courage, alertness and power, all of which best characterized the combat role of the U.S. Air Force. Falconry is one of the extracurricular activities offered to cadets. 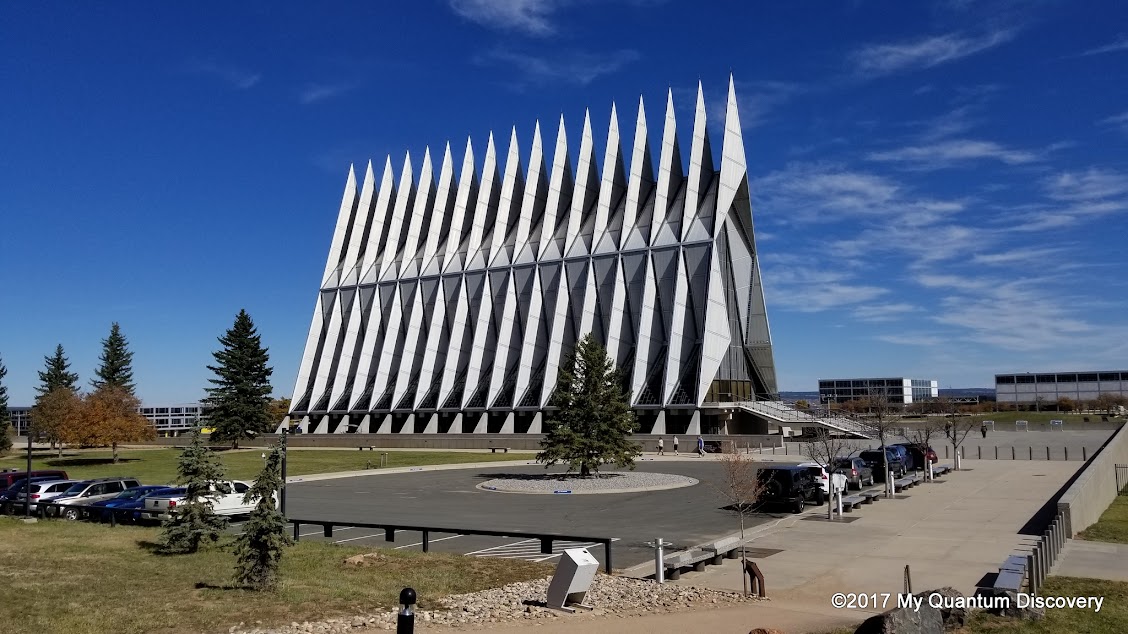 After watching a very informative 14 minute movie that provided us with an overview of the Academy and a better understanding of the cadet’s academy experience, we left the Center and walked the 1/3 mile paved nature trail to the iconic Cadet Chapel with its 150 feet tall spires soaring into the Colorado sky.

What an awesome building! Designed by the internationally renowned architecture firm of Skidmore,Owings and Merrill and costing $3.5 million to build, the structure uses glass, aluminum and steel, suggesting the outer skin of aircraft or spacecraft. When we entered the Chapel we were surprised to learn that it houses many chapels under one roof. The largest, the Protestant Chapel, seats 1200 with a 120 seat choir loft, the Catholic Chapel seats 500 worshipers with an 80 person choir loft, the Jewish Chapel has seating for 100 worshipers and the Buddhist Chapel seats 20 worshipers. There are also four multi-faith use rooms where Muslim cadet and Earth Centered Spirituality cadet faith communities hold services. Each chapel has its own architectural characteristics and decor to support that particular religion.

Outside the Chapel, we had an excellent view of the large square pavilion named the terrazzo.  Because all of the main buildings of the campus are centered around the terrazzo, all activities  – classes, meals, athletics, parade grounds, etc. are within a 10 minute walk from the cadet’s dorms.  Several display markers provided information about each of the buildings and the four aircraft (F-4, F-15, F-16 and F-105) on display at each corner, each of which had some historical significance to the Air Force. There are strips of white marble that run along the terrazzo. Freshmen known as “Doolies” must run along those strips, they are not allowed to wander freely around the terrazzo nor can they speak except to upperclassmen. Wow, that first year must be tough!

After hiking back, mostly uphill, to the Visitor Center, we continued the Falcon Tour in the car, passing by Doolittle Hall, the alumni association for the United States Air Force Academy. The Association of Graduates rents out the assembly area, atrium, boardroom and library for conferences, off-site meetings and special events, from corporate events and wedding receptions to retirement and promotion ceremonies. Although it is located on the Air Force Academy, you do NOT need to have any ties to the military or Air Force Academy to use this facility for an event. 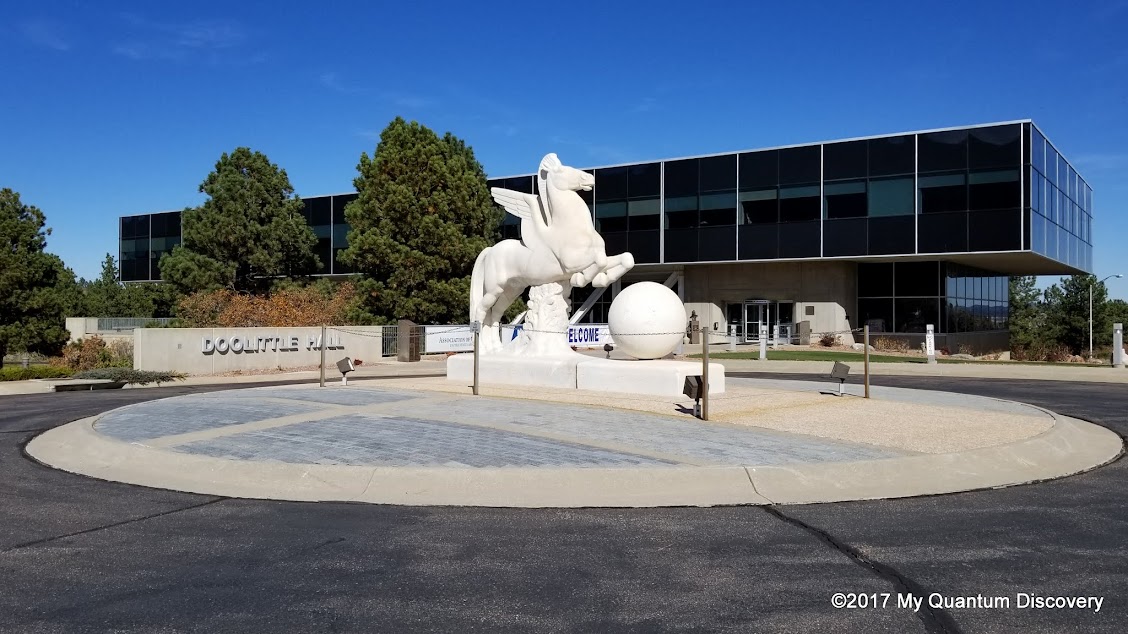 Built in the fall of 1962 at a cost of $3.5 million, Falcon Stadium, is considered one of the premier college football stadiums in the country. The stadium, which was built in a natural bowl, has a capacity of 46,692 and stands at the base of the Rampart Range of the Rocky Mountains. Although it was originally built solely for football, the lacrosse team plays all of its home matches in the stadium and several non-athletic events, such as the annual graduation, are also held there. 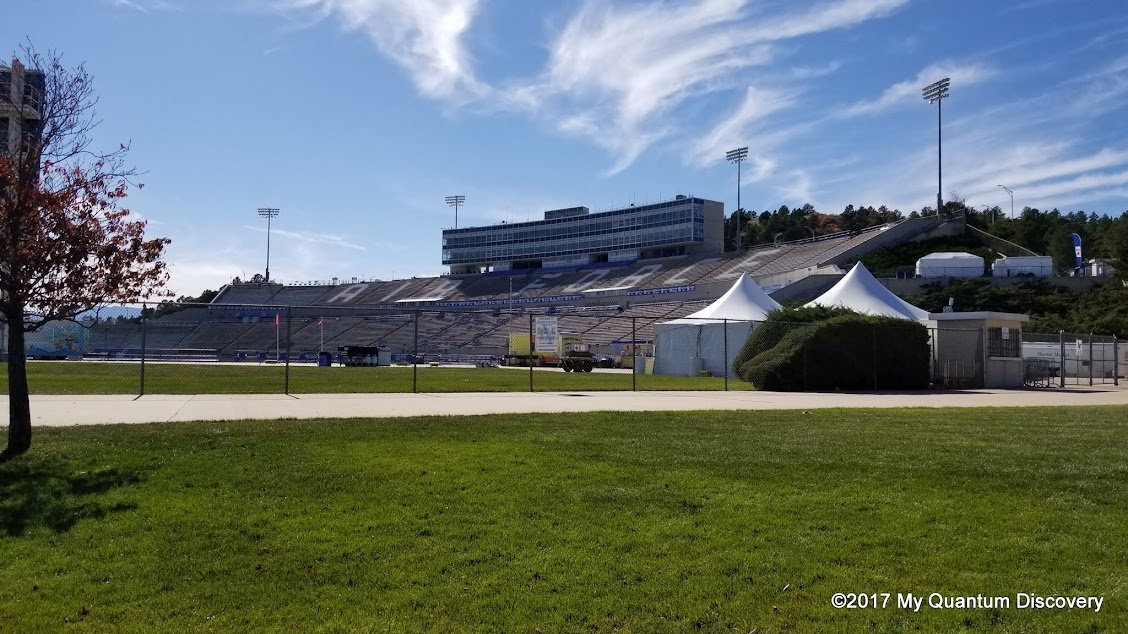 Just prior to exiting the campus via the North Gate, we passed by an old B-52D bomber which began operations in 1957 and served during the Vietnam War named Diamond Lil. During it’s 26 years of service, it flew more than 200 bombing missions, compiling 15,000 flight hours before it was mounted on giant pedestals at the academy’s north entrance in 1983. 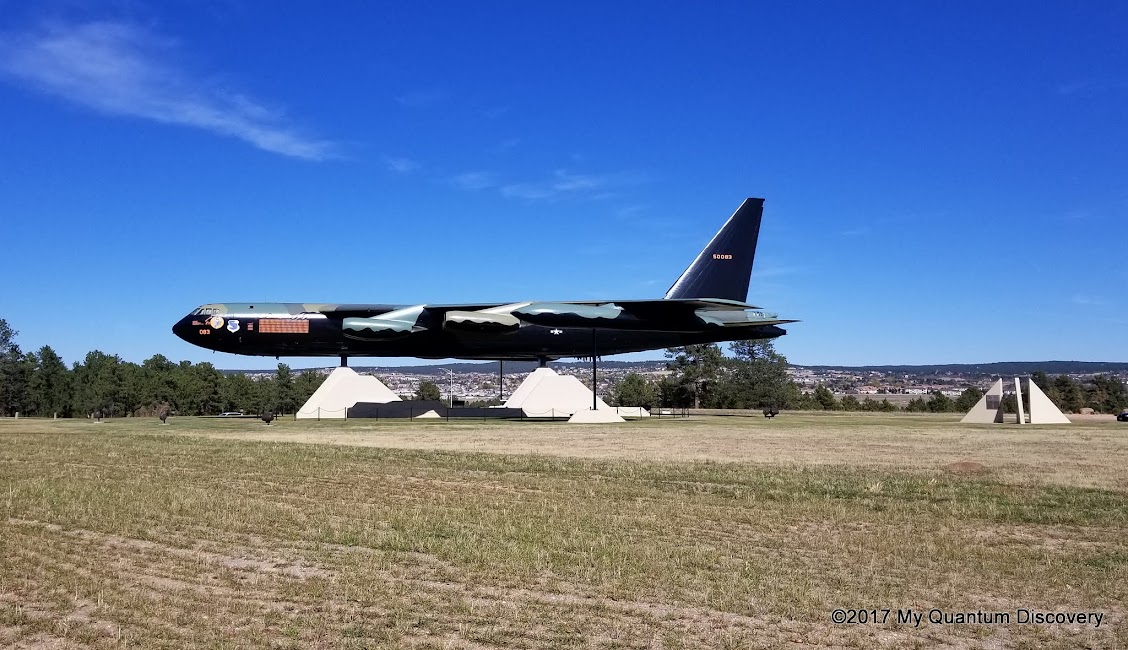 From there we headed to the North Gate where we exited the Academy grounds. Guess this is the one time I can say that I was glad that I was wrong. Wow, what an interesting, educational and very informative day!

Still on our Colorado Springs must see list was the U.S. Olympics Training Center but that will have to wait until another time since we were leaving the area the next day. And to be honest, it was such a busy week, we needed a day or two for a little relaxation! All this sightseeing is exhausting! With one last drive through Garden of the Gods park before heading back to the coach, we would bid farewell to Colorado Springs the next day. But we weren’t done with Colorado yet, we would be spending another week in this beautiful state! 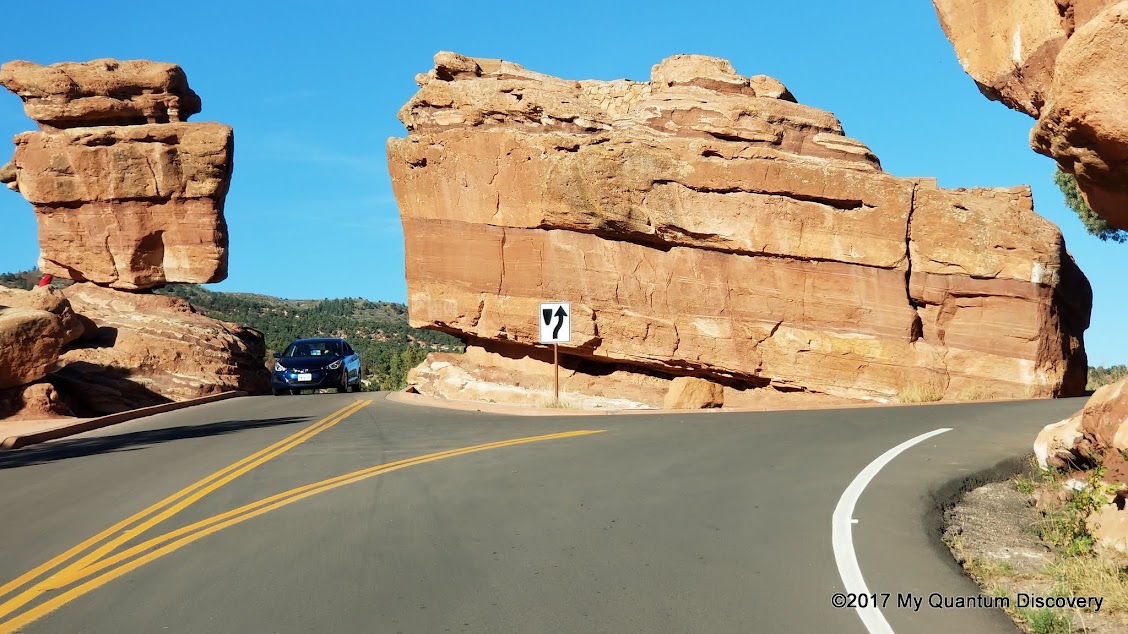 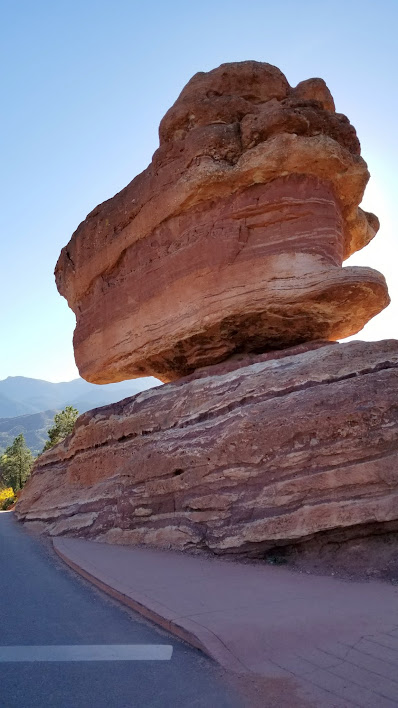