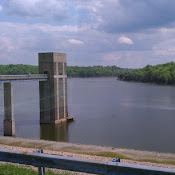 Thursday was a lazy day for us, both of us spending most of the day at Cave Country RV Park working on our blog posts in the hopes that we would get caught up and get everything published.

We finally decided to take a break and went outside to enjoy the sunny skies and good weather. While we were outside, a motor home pulled in two sites over from ours.  It didn’t take long for a conversation to develop.  Nice people – Lee and Madge were from Indiana and on their way to Alabama to visit their grandchildren and then to Florida.  We spent quite a bit of time chatting with them, sharing our RV’ing adventures.

The next morning, Friday, the 20th, we only had a 2 hour drive ahead of us to get to Taylorsville State Park (near Louisville, KY). We didn’t need to rush 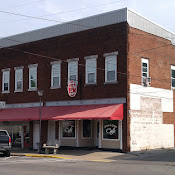 to get ready to depart so we went back to the Cream & Sugar cafe for breakfast.  The 2nd time was just as good as our first visit there – good food & good service, although with only one server when its busy the service suffers.

After topping off our propane tank at the RV Park $3.65/gal), we finally got underway about 11:00 a.m. hopping on Interstate 65 heading north.  Fortunately there was only a mile or so of construction so the drive was not as bad as we experienced coming into Cave City.

Note: we took 12.9 gallons of LPG, or about a third of a tank, even though the interior control panel “gauge” (which is simply 5 LED’s) showed it was only down 1/5.That’s our total propane usage since September of 2011.

I-65 is a 4 lane divided highway, but there was a lot of tractor trailer traffic. 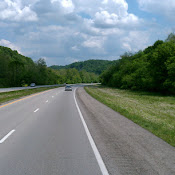 After about 40 miles, we took exit 34 to the Blue Grass Parkway. On the AAA map, the first 20 miles of the parkway are bordered with dots meaning that it is a scenic roadway.  And once again, “the dot guy” was right!

Hilly, heavily wooded in some parts, with farms and pastures in others and hills off in the distance made it quite a scenic drive.  The parkway is also a 4 lane divided highway with very little traffic and minimal trucks so it was pleasant especially for the captain. 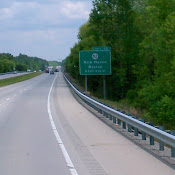 the next exit – it reads “Boston /  New Haven  2 miles”.  Are we that close to home already? (For those of you not familiar with where we live, New Haven is in CT and along the Route 95 belt that we use to head south and we live southeast of Boston).

As usual these days we were using dual GPS (a dedicated Garmin & Google Maps via our smartphones) – or should we say “dualin GPS” – and they each had different directions to get to the campground.

Mrs. Google chose KY 55/155 (exit 34) for us to exit the Blue Grass Parkway and Mrs. Garmin thought KY 555 (exit 42) would be best.  Since the signs for the campground indicated that we should take 55/155, that’s what we did. Usually, prior to departure we use Google Maps and “street view” to get a feel for the road quality, so we knew this stretch of 55/155 was not going to be ideal. 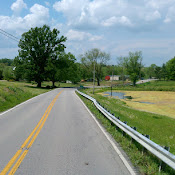 Oh my gosh, Rob’s favorite (NOT) kind of road in the coach (although he says fun in the van).  Narrow, hilly, lots of  twists and turns (some hairpin) with no shoulder and deep gullys on both sides. 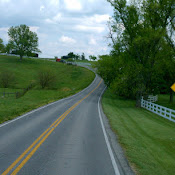 Yours truly was white knucklin’ it (and driving Rob crazy  with my “Holy Crap” every few minutes) – good thing I didn’t have to drive!

The good thing was that they had a rumble strip in the middle so if you had trouble navigating the roads at least you would know that you weren’t in your lane.  The bad thing was that in the motor home if Rob decided to take up more of the road when there was no traffic (which was quite a bit of the time), we’d hit the strip – bumpy, noisy and very annoying! I finally distracted myself by taking a lot of pictures as we drove along. 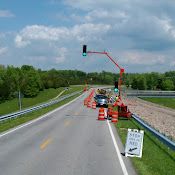 Next we turned right on SR 2239 which crosses the top of the Army Corps of Engineers dam that creates Taylorsville lake. 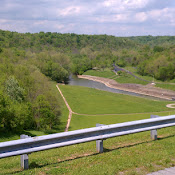 As we approached the dam, there was a sign “one lane road ahead”.  Boy, they weren’t kidding! It was due to construction on the top of the dam, the open lane was a bit tight but not a problem.  We had a commanding view of the 300 foot drop-off and valley on the left side. 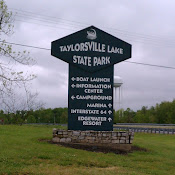 After a few more miles on SR 2239 we took a right onto KY 44 which blends into KY 248.  This stretch of 44/248 is a 4 lane divided highway – much  nicer!  Finally we turned on to State Road 3230 which is the main park road and shortly thereafter arrived at the campground.

Note: as it turns out Mrs. Google was right and even though it was a few miles extra, we should have taken exit 42 and SR555/62/248, which for the most part are much better roads. If you are arriving from the Northwest, to get to Taylorsville Lake State Park we would suggest taking exit 23 off I-265 (Louisville outer beltway), then SR155 south/SR55 south/SR44 east/SR248 east – this is the route we took as we left Taylorsville and headed north – easy.

Taylorsville State Park Campground is an Army Corps of Engineering campground with a rate of $25 on Fri/Sat and $23 the rest of the week.  With the Senior Pass or AAA there is a 10% discount, but we received a 20% discount due to a “camper appreciation” promotion offered by Kentucky State Parks for the month of April (code APR12). However, each reservation made online incurs a $7.50 fee so our total for 2 nights was $47.50.

Note that there is no reservation fee (we think) if you just show up, however you also can not use the 20% promo in person (only on-line). 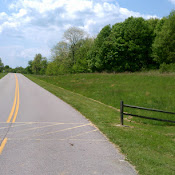 Plus, we were concerned about getting a site since it was the weekend (and rightly so as it turned out).

There are “equestrian” sites here (on a separate loop in the campground) and a mesh of riding trails, so there are signs everywhere for horse crossings and “Horses have right of way”. 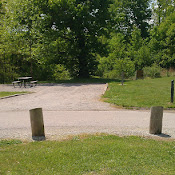 After checking in, we made it to our site #31. To access this site (or any of the sites on the same side of the road), we first had to proceed all the way to the end of the road and use the cul-de-sac loop to turn around. 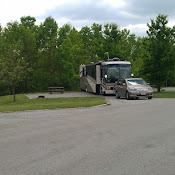 Navigating this loop was a little tight due to a narrow roadway and some strategically placed short pilings, but definitely doable. 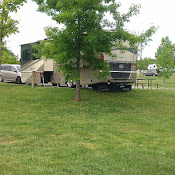 Nice place, looks relatively new.  All sites are very wide and fairly long with a picnic table, fire pit and the usual lantern hook. Lots of space and green grass between and behind the sites. Relatively young trees are planted near the front of the sites so don’t provide much shade, which is not an issue today given the cold weather. 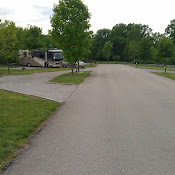 Our site is huge with lots of green grass all around and woods behind us. The only downside is the site to our right (#32) is a small pull thru so our outside areas are in direct view of each other – most of the other sites would therefore offer more privacy. Note that site #32 is NOT marked as a pull-thru on the Reserve America campground site map.

We think the best sites here for privacy and space would probably be #41, 28 & 45 (in order of our preference) and the sites to avoid completely would be #26, 25, 31, 32, 33 due to lack of privacy. Most of the remaining sites are spacious and well situated for privacy. (click here to see captioned photo album). We did not look at the Equestrian loop.

There are no sewer hookups here, but there is a dual dump station (you can pull in from either direction). Water pressure was good. Electricity is 30A and 20A (no 50A), however there are two 30A outlets with separate breakers. We did not have any issues with a single 30A supply since the weather was coolish, although our Intellitec EMS did kick in now and then and cut off the water heater to keep us from overloading the circuit. Voltage was solid at 118v.

We were able to receive all the major networks on OTA TV, but it took some tweaking and maximum gain on our WineGard Sensar Pro (I like this device it works well – will report in more detail in another post). The Sprint 3G signal here was marginal but it worked. Verizon 3G had a slightly better signal strength but the service varied from good to non-existent. We would have been just fine using Sprint for our internet access, but it kept roaming over to the Verizon service – Rob has not yet had the time to figure out a hack for this phone (Sprint EVO 4G) to force it to stick with one CDMA carrier or the other.

It rained Friday night and Saturday although it wasn’t a washout.  This area is in the heart of the Kentucky Bourbon Trail so that was our entertainment for Saturday….stay tuned for details!