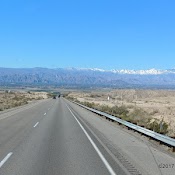 Not being long range trip planners, after Quartzsite we had no idea where we were going next. There was still a lot to see in AZ but most of it was in the northern part of the state where there probably would be a risk of snow and/or ice in the higher elevations, so we quickly ruled that out. When the four other couples that we met at the Quartzsite Entegra rally suggested that we join them at Rancho California RV Resort (see our review) in 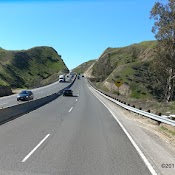 Aguanga (pronounced “a WHON ga”), it didn’t take much to convince us.

Traveling along interstates sometimes can be pretty boring but that wasn’t the case with the I-10 (Californians always use “the” before every route number – the I-5, the 215, etc.) between Quartzsite, AZ and Aguanga, CA. Our drive took us from the cacti and desert shrubs of the Sonoran Desert to the gargantuan, white capped mountain peaks of the San Jacinto Mountain range to lush, green rolling hills dotted with huge boulders along SR-79. Wow, what totally awesome scenery! Knowing that California has had a drought for a number of years we didn’t expect everything to be 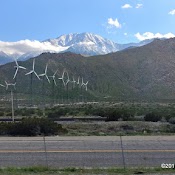 so green. Of course this winter they have had more rain than usual.

But the surrounding natural beauty wasn’t the only thing that caused us to ooh and aah as we drove through the Palm Springs/Indio area. Thousands of wind turbines bordered the 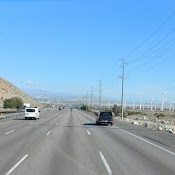 highway and dotted the hillsides.

San Gorgonio Mountain Pass, one of the deepest mountain passes in the San Bernadino Mountains and in the U.S. is home to one of the nation’s largest wind farms. Containing more than 4000 separate windmills in a 70 square mile area, enough electricity is generated to power Palm Springs and the entire valley. It was quite a sight to see! We were surprised to learn later that there are several companies that offer windmill tours ($49 for adults, $45 for seniors). Hmmm, that probably would have been interesting. We didn’t get a chance to do it this year but maybe some time in the future we will. 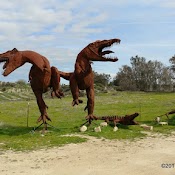 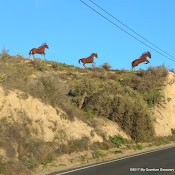 Driving along the hilly, twisty and turny, no shoulder SR-79 to the resort, we were surprised to see a metal sculpture of a vulture sitting atop a metal saguaro cactus, quickly followed by three wild mustangs atop a road cut looking like they were about to jump the cliff over to the other side!

What intrigued us most though was a gravel parking lot completely filled with several rows of metal sculptures. A few days later we stopped there for a better look. Wow! The detail in each sculpture was incredible. A Wells 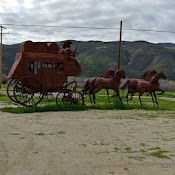 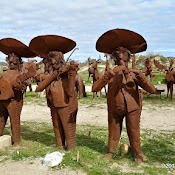 Fargo stage coach, several dinosaurs, a gorilla, three amigos, and all sorts of animals wait patiently for a new home. Many of them are huge, life sized creatures, but there are smaller ones available as well.

During a conversation with one of the artists working there, we learned that these sculptures were the brain child of sculptor, Ricardo Breceda, who started his metal sculpting career because of his daughter’s fascination with dinosaurs after the 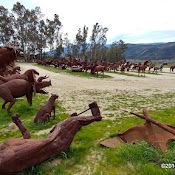 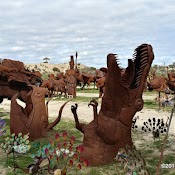 release of Jurassic Park III. She asked him for a full sized dinosaur for Christmas – how could a father refuse! He has been creating his metal animal kingdom ever since.

If you can’t find a sculpture that you like out of the hundreds on display, Ricardo says that “all I require is a photo or sketch and I’ll create a unique sculpture for you!” We didn’t have a chance to go there but at Anza-Borrego Desert State Park, there are more than 130 full-sized Breceda metal sculptures inspired by creatures that roamed this same desert millions of years ago from prehistoric mammals to fanciful dinosaurs. There’s even a 350-foot-long fanciful serpent. So cool! 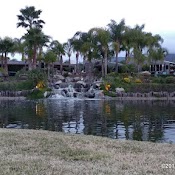 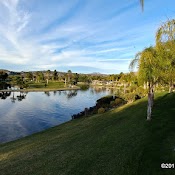 As soon as we arrived at the entrance to Rancho California, we knew we had made the right decision to spend a month here. Surrounded by beautiful mountains, despite the fact that it was in the middle of nowhere, this well maintained, beautiful resort quickly made it to the top of our favorites places to stay. There’s even a golf course!

It was a fun and productive month! As with anything new, Rob had a list of improvements and enhancements he wanted to make on the coach so it was Christmas every day with UPS and Fed Ex delivering various components to our site. Although there is still more to do, he managed to complete a few items on his list. 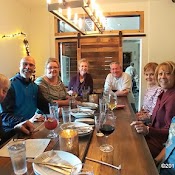 Then of course there was lots of socializing with our new found Entegra friends – a lasagna party hosted by Vickie and Bruce, a happy hour at Janice and Dave’s site and a margarita party by George and Andy. And a very rainy, goodbye meal the day before we left, at the Goat & Vine in nearby historic Temecula where we had a delicious lunch. Highly recommended. 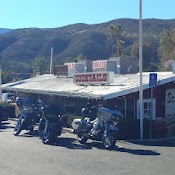 Although there are a lot of restaurants in Temecula, it is a good 30 minute drive and parking is at a premium, so we frequented the Stagecoach Inn Restaurant just down the street from the resort. Not much to look at from the outside but we went there several times for breakfast and once for lunch with our next door neighbors, Ed and Jan. Not only was it convenient but both the food and service were very good.

In between the projects and the socializing, we did some sightseeing. Stay tuned to find out what we did!