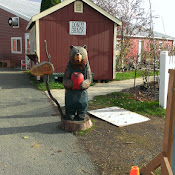 Many of the campgrounds in New England close for the winter around the middle or end of October so when we decided to visit Rob’s Dad, we had a difficult time finding a safe and convenient place to park the coach overnight.

Although staying overnight in a WalMart or other parking lot is always a possible option and we have done that but always stay nearby the coach. In this case we would be gone for several hours and we weren’t comfortable with just parking it and heading out with no one on board except the kitties. Also, the closest WalMart did not permit overnight parking. So we spent some effort looking for other solutions.

One option was a nearby Coach Care facility (Cummins Northeast), but we didn’t have any service scheduled and felt funny about just using their overnight spots. After doing some more research we discovered the Harvest Hosts organization. Harvest Hosts is a network of wineries, farms and agri-tourism sites that invite self-contained RVers to visit and stay overnight for free!  The only requirements are that you become a member for an annual subscription fee of $40, that you call the host 24 hours in advance to ask if you can stay there and that you consider purchasing something or make a small donation before leaving.

Luckily for us there was a host located in Rexford, NY which is about 20 minutes from Albany and they were willing to let us stay there overnight.  Problem solved! We felt that this would be a lot safer than leaving the coach in a WalMart parking lot. 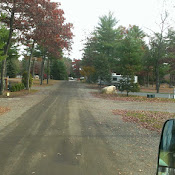 So on Friday morning, November 8th, with a rather late start, we said goodbye to MA and started our 3 hour trip taking our usual Interstate 90 (MA Pike) route.  It was chilly, windy and overcast but not a bad day to be 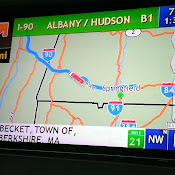 driving – or so we thought.

Things were going good until just before we reached the “hill” – the town of Becket and the highest elevation point of 1724 feet.  Suddenly it started snowing! WHAT???? It was blowing 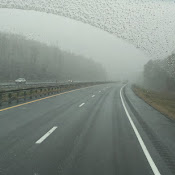 so hard, the snow was coming down sideways, creating an almost white out condition (hard to see that in the picture).

Did the gods decide to do this just so we would have a better appreciation of the warmer climate down south?  No need for that! After dealing with 2 blizzards last year with two feet of snow each time, we remember the white stuff all too well!  Fortunately we only had to drive in it for about 15 minutes then just as suddenly as it started, we passed through it and the sun came out, but the temps were still hovering in the mid 30’s. 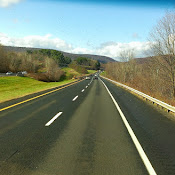 The rest of the drive was uneventful (thank goodness). Near Albany, we exited from I-90 onto I-87 and followed that until exit 8A, Grooms Road. You can take another exit, Riverside Drive, but when I called to arrange for our stay, I was told that that road was very twisty with lots of turns.  No thank you!

Grooms Road was very scenic and fairly easy ride with rolling hills, a lot of farms and 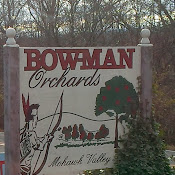 apple orchards.  After driving about 20 minutes, we finally we arrived at our destination, Bowman Orchards.  Bowman Orchards which has been in operation for over 60 years, has over 98 acres of orchards with 46 varieties of apples as well as strawberries, blackberries, raspberries, pumpkins, pears and peaches – all of which you can pick yourself.

Once we arrived, we went inside the gift shop to find either Kenny, Kevin or Martha to ask where we should park.  BRRRR! It was cold and blustery and there were a few flakes of snow falling.  UGH! 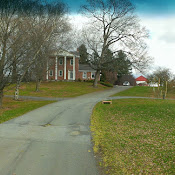 grassy parking lot to the other side of the fence was pretty easy.  We also were told by Kenny that it was okay to put our sides out and to run the generator.  We put 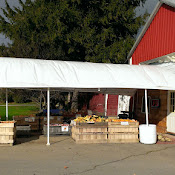 the slides out but didn’t bother with leveling the coach although we were pretty much off kilter. We figured one night off level wasn’t going to hurt anything and we’d skip the morning shower.

Once we were sort of settled, we went back to the bakery which was located in a different building.  It was easy spending some money – a half gallon of fresh pressed apple cider, some apple cider doughnuts for Rob’s Dad and us (great for a quick breakfast while on the road) 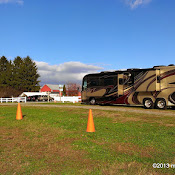 and oh oh, a frozen apple pie, which may be our dessert on Thanksgiving.

Once our shopping was done, about 3:00 p.m. we headed over to Avila (about 20 minutes away) which is where Rob’s Dad is living now. Avila has about 200+ independent living units, a library, bistro, crafts room, exercise room, billiard tables, a full size swimming pool, and entertainment several times a week.

Even though it had only been a two weeks since he moved out there, it was good to see him. And especially good to see him much more relaxed and without all of the stress he had been experiencing the past few months with the sale of his house.

His apartment is quite lovely, very cozy and the perfect size for him (836 sq. ft. with a full kitchen) – we would have taken some pictures but he still has a lot of boxes everywhere since he hasn’t quite settled in yet.  He seems quite happy, feels that he made the right decision, is participating in a lot of the social activities and has made some new friends. After everything he has been through, we are so happy for him!  And we’re happy for us since we won’t have to worry about him as much, knowing that he is with other people, can be very active if he chooses and is in a safe environment. Though it will be strange next summer to return to RI and not have him there. 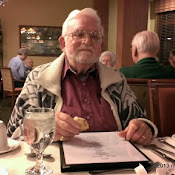 nice table settings with tablecloths and linen napkins.  Each month he receives 42 credits for his meals which he can use however he chooses for breakfast, lunch or dinner or he can make his own meals in his apartment kitchen. Dinner costs 2 credits and lunch costs 1 credit.

The menu is quite extensive with both daily and monthly specials so there is a wide variety from which to choose.  Waiters and waitresses (no tipping please) take your order just like in a regular restaurant. We all had the daily special which was crab rangoon and seafood chowder for appetizers, teriyaki salmon with a choice of potatoes and two vegetables and chocolate lava cake for dessert.  A very filling and very delicious gourmet meal! Bob said he would have to start using the pool and exercise equipment to keep from gaining weight!

After dinner we returned up to his apartment and visited until around 9:30 p.m. and then we said our goodbyes and left to return to the orchard.  Knowing how difficult the holidays will be for him especially this year, we were pleased that he had decided to fly to Chicago to spend the Thanksgiving holiday with Rob’s younger brother, Jeff, and his family.

His original plan was to go by train but after learning that that trip would take over 24 hours, we weren’t surprised to hear that he decided to fly to instead. He hasn’t flown in years! Spending the holiday with Jeff and Michelle and his grandchildren, Olivia, Sienna and Christopher, will help make it a little easier since it is something totally different than our usual family get together at Linda & Herb’s where there would be a lot of memories.  And what is even more special is that Chris will be starring as the wizard in a production of The Wizard of Oz that week so Bob will get to see his grandson (we’ve heard he is a total ham) perform. 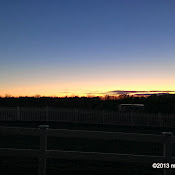 After a good night’s sleep, on Saturday morning with a 5-1/2 hour drive ahead of us, we were up with a beautiful sunrise while listening to a rooster crowing off in the distance.  And I have to say it is so much easier and faster getting ready to leave when there are no hookups so by 7:15 a.m. we waved goodbye to Bowman’s and we were on the road again. 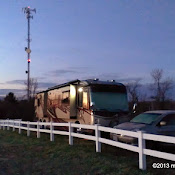 The next leg of our journey south would be via a different route than we have done previously and we’ll talk about that in our next post.

Overall our first experience staying at a Harvest Host facility was a positive one, the drive to Bowman’s was easy, navigating the parking lot was easy (not sure how it would be in the middle of a busy season), the staff was friendly and of course, the goodies were delicious (don’t know about the pie yet – it is still in the freezer). It would have been nice if the parking lot was a little more level but it wasn’t all that bad.   And even though we were out in the middle of nowhere, we felt a lot safer than being in a WalMart parking lot somewhere. As you can see in the picture to the right, we were pretty close to a cell tower and had an excellent Verizon 4G signal. There were good OTA TV signals too.  We would definitely stay here again. 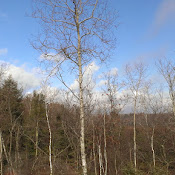 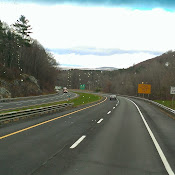 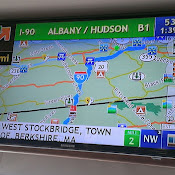 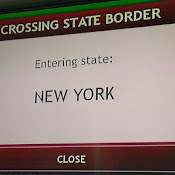 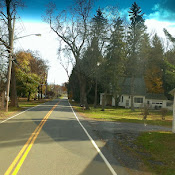 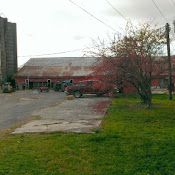 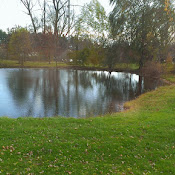 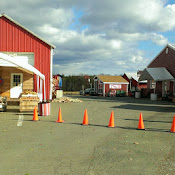 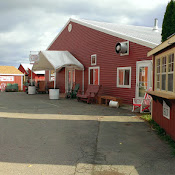 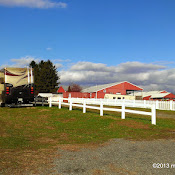 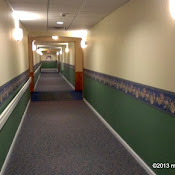 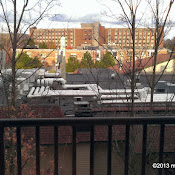 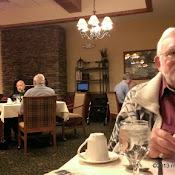 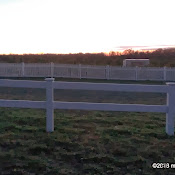 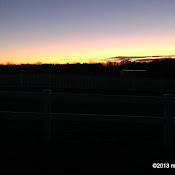 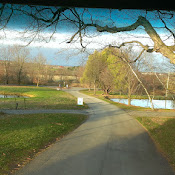 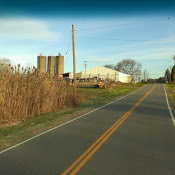 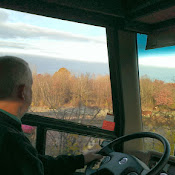