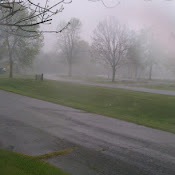 After a very informative visit to the Fleetwood factory on Monday, we returned to the campground and Rob went off for a bike ride while I went for a walk.  It was a lovely day, warm (out came the shorts again), and sunny, but my how quickly things can change.

Rob had signed up for a weather alert program on his phone and in the late afternoon the skies became dark and his phone started screaming. Oh, no, another severe storm warning with the usual threat of 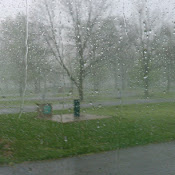 Is it my imagination or have we had a severe storm warning just about every other day over the past few weeks?  Maybe if we 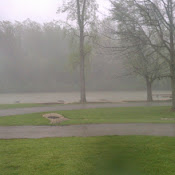 were here for another month or two I would get used to them but they really make me nervous especially when the “t” word (and I don’t mean thunder) is added to the mix.

Fortunately this warning did not materialize into any tornadoes! We had some thunder and lightning (luckily we didn’t get the damaging hail) but the rains were torrential and coming down sideways due to the wind – we couldn’t even see out into the lake.  Luckily it wasn’t hitting us broadside like it did in the parking lot in Tuscaloosa.  It pretty much rained all night so no campfire for us that night! 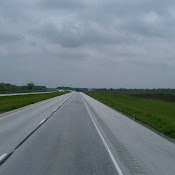 On Sunday morning, May 1st, the skies had cleared and the weather, even though it was pretty overcast, was much improved.  Our next destination was West Branch State Park in Ravenna, which is west of Akron and about a 210 mile, 3 hr 30 minute trip from St. Mary’s.

Since this was a longer drive than most of our recent legs, we had planned on getting an early start but we didn’t leave until 11:00 a.m. While Rob was hitching up the toad, our new neighbor Bob who arrived the previous day, came over to see what Rob was doing. Bob has a fifth wheeler and was quite curious about the entire toad hitching setup.  It turned out that he and his wife spent the winter months out in AZ so we expended quite a bit of time talking to him about the campgrounds there, costs, etc. 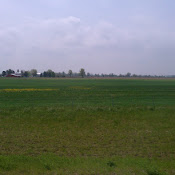 Finally, we ended the conversation and after a stop at the dump station we exited the campground, heading out on SR 703 to SR 29/33, then to I-75.

At I-75 exit #134, we  picked up SR 30, heading east. SR-30 was a very nice 4 lane divided highway with minimal traffic but pretty boring and monotonous – flat and straight with nothing but trees and farmland to look at!  Just south of Mansfield, Ohio we picked up I-71, heading north towards Akron. In Akron, we picked up Interstate 76.

Now this is probably an appropriate time to say that (with the exception of SR30) the condition of the Ohio roads as we approached Akron reminded us of those in some of the more urban areas of New Jersey/New York.  Any New Englander reading this is probably saying “what? how can that be? Nothing can be worse that the New Jersey roads”!  Well, trust us, they are (apologies to anybody from Ohio reading this).

Bumpy, patched and uneven asphalt, noisy bridge expansion joints and lots of pot holes! And it didn’t matter whether it was an interstate, a state road or a side street – they were all awful! Maybe we have been down south so long that we have forgotten what damage snow and ice can do to the roads.  It often felt like everything in the motor home was going to come crashing out of the cupboards!  In fact at one point in time, we hit a bump and the rack in our convection/microwave oven jumped off it’s bracket and started rattling like crazy! Even driving in the van is not a pleasant experience.  On the other hand, SR 30 was great (a four lane divided highway with a relatively good surface) and most of the roads we encountered in western Ohio were fine.

Off the soapbox about the road surface quality and back to our travels! When we made our reservations for the West Branch campground the confirming email warned about a bridge on Rock Spring Road (if approaching from the north) with a weight limit of 10 tons 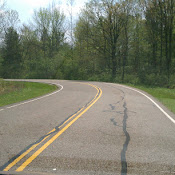 and some other “issues”.

Of course, even though we were arriving from the south and west, both Mrs. Garmin and Mrs. Google (GPS) tried their darnedest to take us over that bridge, but instead we followed the directions suggested by the campground and left I-76 via exit 43 onto SR 14, turning south onto Tallmadge Road. We then traveled north about 4 miles on Rock Spring Road, then took a right 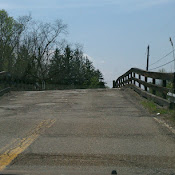 onto Copeland Road (the bridge is on Rock Spring Rd just north of Copeland Rd ), then continued onto Esworthy which we followed to the campground.

Rock Spring Road was even more miserable than the other area roads we encountered. Narrow, hilly, uneven, bumpy, undulating, patched and just not any fun – no way we could run at the posted 45mph speed limit without great discomfort.

On Wednesday morning, we went out exploring and particularly wanted to check out the aforementioned 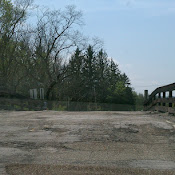 bridge. Crossing this bridge is the best way to go if arriving from the north or departing to the north, so we wanted to see if it was as bad as described – well, it was worse. It crosses over railroad tracks and even in the Odyssey, it spooked us out a bit- all RV’s and trailers beware!

Later, Rob was talking to the campground host at West Branch and she said she only knew of 3 cases of rigs getting hung up on this bridge (oh wow, only 3!). With a long rig, due to the sharp rise on each end of this short bridge, it’s entirely possible to get stuck and/or do some serious damage. We didn’t chance it, not to mention the fact we are well over the weight limit. On the bright side, later this month the bridge will be closed for repairs. Not sure how long this repair will take but for now we suggest you avoid it despite the alternative which involves coming in from the south on the beautiful (not!) Rock Spring Rd. Here’s the location of the bridge: 41.152695,-81.147113

So we arrived at West Branch around 4:00 p.m. and once again there was no one at the office so we proceeded directly to the site that 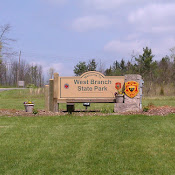 we had reserved, #95. This campground is located on the banks of the Michael J. Kirwan Reservoir, is operated and maintained by the state of Ohio but was originally constructed by the Army Corps of 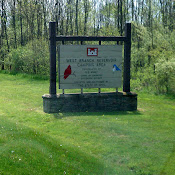 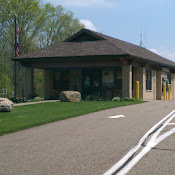 water/electric and no-hookup sites are located along the perimeter and waterfront so they have nice views overlooking the reservoir.  The 29 full hook up sites, including the 5 or 6 pull-thru’s, are more centrally located and have a very limited view of the water. 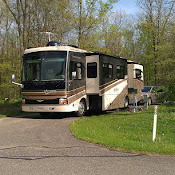 Our site #95 is a full hookup pull-thru and was $33/per night.  This was pricey but we couldn’t find much else in the area that was open.

The roads and the sites are paved but this is a hilly area so some sites are considerably out of level.  Also many we observed had muddy areas off the pad, but I suppose this is “mud season” after all.  There are several lovely, fairly new looking very clean bath/laundry houses, a playground, beaches and a boat ramp nearby.

Although the paved portion of our site is fairly level, the grassy portion on the  sides is on a rise.  There is plenty of length to this pull-thru site, so leaving the toad attached would have not been a problem (we unhitched anyway so we could go exploring). This site is also situated such that the living (passenger) side is exposed to sites across the road.  The campsite adjacent (#94) has more trees and brush and in retrospect we should have reserved that one, but when booking online (even using the sat images) it’s hard to make an accurate assessment.

On Tuesday night, we enjoyed a campfire, cooking some of our Elberta German sausage which we had in a roll with sauerkraut.  Yummy!

50/30/20 amp service is provided and we had 119v on both legs of the 50A with no issues during our stay. Water pressure at our site, to be blunt, totally sucked – it was so low we had to run the on-board pump. Then it took close to an hour to fill our fresh water tank the morning we left. It may have been our site, but a quick test on a few other empty sites revealed similar issues.

OTA TV was good and we were able to pull in all the major networks, again though our Winegard Sensar Pro was running at maximum gain and the antenna direction needed careful tweaking. Sat TV users should be able to find a few sites with a clear view of the sky but take note there is fairly heavy tree cover here. There is no WiFi. Verizon 3G was very poor but it worked, Sprint 3G was very good – good enough that we streamed a movie or two during our stay (our Sprint service has unlimited data).

As for the campground itself it was OK – truthfully I don’t think we would go out of our way to come here again given the very poor access roads and relatively high cost. Some of the sites were nice but we’ve seen a lot better and the best ones don’t have full hookups. On the other hand, maybe we are spoiled by some of the other places we have been, so for a northern campground this place is probably pretty good.

The next day we went off exploring but more about that later…..[pe2-gallery class=”alignleft” ] 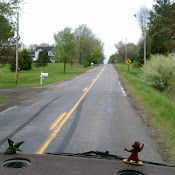 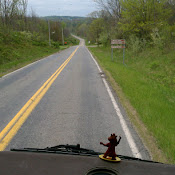 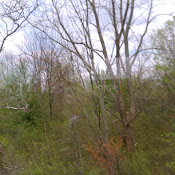 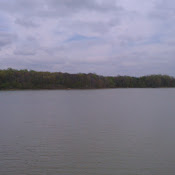 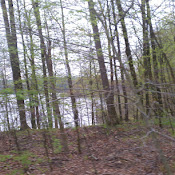 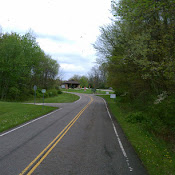 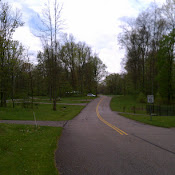 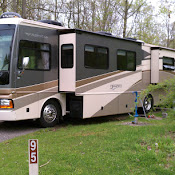 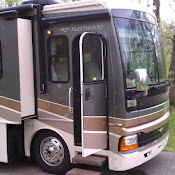 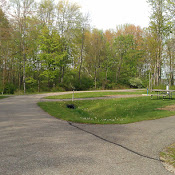 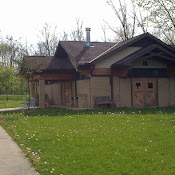 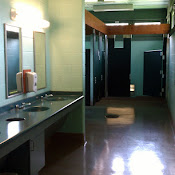 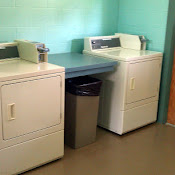 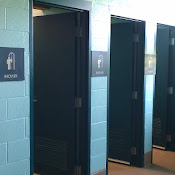 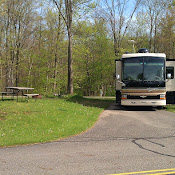 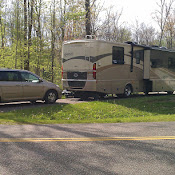 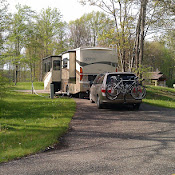