Based on suggestions for things to do and places to see when we checked in at Myakka River Motorcoach Resort, on Monday we decided to explore the surrounding area, taking a drive to the barrier island of Boca Grande and then a drive back up the coast to the beach town of Englewood.

Boca Grande is located about 28 miles from Port Charlotte via Gasparilla Road (771) but we took a slight detour. Rob had read about an area nearby called “Rotunda West” which piqued his curiosity. Hmm, after looking at aerial views we wondered – did a huge intergalactic flying saucer land here, marking a perfect circle? Nah, nothing as exciting as that! As you can see in the picture to the right, it is laid out like a big wheel with spokes or perhaps like a sliced pizza pie. We didn’t see it but there is a large park inside the center of the Rotunda with a playground, tennis courts, and a walking path.

According to what we read in some brochures, Rotunda West is a planned community located mid-way between Sarasota and Fort Myers and consists of 8,000 home sites with over 5,000 homes completed. In addition to the homes, there are six golf courses operated by the Rotonda Golf and Country Club as well as thirty miles of canals, lakes and ponds offering fishing and boating opportunities for its residents.

Sounded interesting in theory. Not quite sure what we expected perhaps we thought it would be a very upscale, beautifully landscaped area but it wasn’t (at least the sections we drove by) – it just looked like your average community neighborhood. Perhaps there were some upscale neighborhoods but if so we missed them.

After that little detour, we continued on our way. Located at the southern tip of the Cape Haze Peninsula on Florida’s Southwest Coast midway 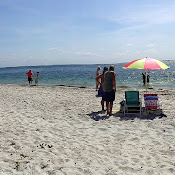 between Sarasota and Ft. Myers, there is a barrier island, Boca Grande, that gets its name – Spanish for “Big Mouth” –  from the mouth of the waterway, called Boca Grande Pass, at the southern tip of the island. Because it is one of the deepest natural channels in Florida, tarpon congregate to feast on the abundant nourishment provided by the waters of Charlotte Harbor before spawning in the Gulf of Mexico, making it a popular fishing destination. 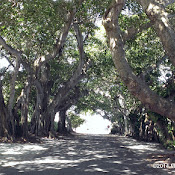 In the center of the island is the historic village of Boca Grande, where there are no stoplights, no billboards, no high rises and no fast food chains. Imagine that! No gas stations here – lot of residents make their way around town in golf carts. In fact, we commented on the fact that the bike path was so overrun with golf carts, it might be challenging riding a bike through town. 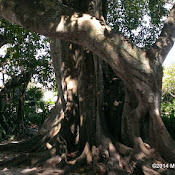 Driving through the center of town, there were a lot of boutiques, cafes and restaurants. Beautiful flowing hedges lined the streets hiding what appeared to be numerous upscale homes. We drove down Banyan Street (2nd Street) which is lined with Banyan trees, the few remaining ones left after Hurricane Charlie decimated the island in 2004. 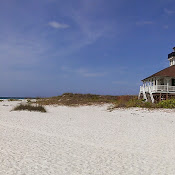 restored Port Boca Grande Lighthouse which now serves as a museum (free). The museum has displays depicting the history of the area starting with the Native Americans, the Spanish 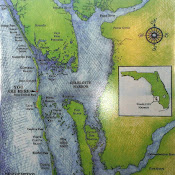 influence, and the history of the lighthouse. There’s also information on the local fishing industry and Port Boca Grande.

Lot of history associated with this light house which was built in 1890 and originally served ships transporting cattle from ports on Charlotte Harbor to Cuba. Then when phosphate was discovered near the Peace River area and ship traffic increased as they 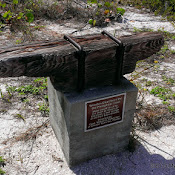 came from all over the world to load phosphate, Congress appropriated $35,000 so a lighthouse could be built. It was an iron screw pile design with a wood frame and originally had a 3-½ order clam-shaped Fresnel lens which could be seen for 12 miles. The building next to the lighthouse used to 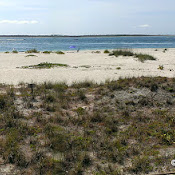 serve as the assistant keeper’s dwelling.

Ship traffic to Port Boca Grande peaked at more than 30 ships a day during World War II, when it served as a safe harbor for shipping in the Gulf. The lighthouse was used to watch for German U-boats.

In 1956, the light was automated, putting the light house keepers out of work, then it was deactivated in 1966 and abandoned by the USCG resulting in the deterioration of the lighthouse. In 1980, it was placed on the Register of Historic Places. Restoration work started in 1985 and the light was recommissioned in 1986. In 1999, the lighthouse became a museum and opened to the public, one of only six lighthouses in the State of Florida to be open to the public. 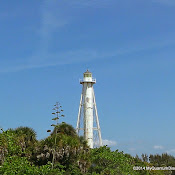 Not too far from the lighthouse and museum is the Boca Grande Entrance Rear Range Light. These pyramidal skeletal towers were popular because they cost much less then lighthouses made of stone or brick plus they could be disassembled and moved. This particular light has an interesting story as it was originally made in 1881 in Trenton, NJ, then moved to Lewes, Delaware where it served as the Delaware Breakwater Rear Range Light until 1918. It was disassembled in 1921 when it was shipped to Miami. In 1927, it was reassembled on Gasparilla Island, painted white and rechristened Boca Grande Entrance Rear Range Lighthouse.  This light, now known as the Gasparilla Island Light, is still active today although it is in desperate need of repair and the United States Coast Guard does not have the budget to repair it. 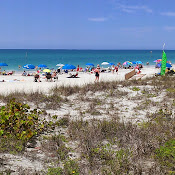 Leaving Boca Grande, we headed north up the coast, driving along 776 towards Englewood which is home to several beautiful beaches. We stopped at Englewood Beach to take a look. Similar to Destin and the Emerald Coast, the water had a vivid aqua green color to it. Looked very inviting to say the least! Even though it was a weekday (Monday), being so hot and humid it was pretty crowded.What an array of colored umbrellas!

After leaving the beach, we decided we were hungry. Ralf, the owner at Myakka River Motorcoach Resort, had recommended a restaurant adjacent to the beach, the Gulf View Grill, but when we 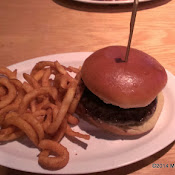 drove by it, it looked packed so we decided to pass. As we headed back towards the coach, we were on the hunt for someplace to grab lunch. Long story short, we ended up at a Beef O’Brady’s close to the resort. On Mondays, they have a $5.49 burger special served with curly fries so that’s what we both had. We’ve eaten at other Beef O’Brady’s in the past and thought the food was very good.  We would rate the burgers at this one as fair, nothing special. Not sure if that is typical of their Monday burgers or if it was just this particular location was sub-par. 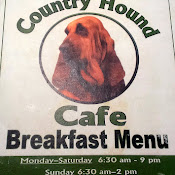 After lunch we made our way back to the coach where we relaxed for the rest of the day. 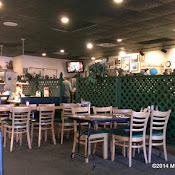 Since we had to venture out to Sam’s Club on another day, we stopped for breakfast at the Country Hound Cafe (right near Beef O’Brady’s) in Englewood. I had a rather unusual omelet – 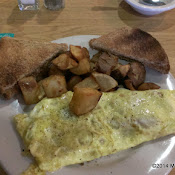 blue cheese and apple ($7.99) which was very tasty and Rob had his usual corned beef hash with 2 eggs ($5.49) which was good as well. Definitely would return here 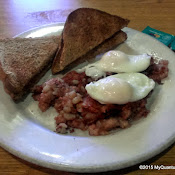 again for breakfast or lunch if we were in the area.

Late Thursday afternoon, we met our friends, Chris and Bob, at Phil’s 41 Restaurant in Punta Gorda for dinner. Besides the good food, they like it here because cocktails are 2 for 1 until 6 p.m. in the dining room (until 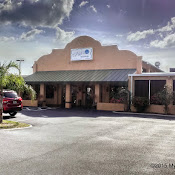 closing at the bar). Since they dine here frequently we followed their lead on what to order. Based on Chris’ recommendation, Rob and I both had the Seafood Fra 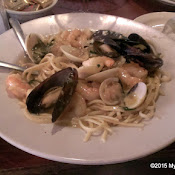 Diavolo which is described on the menu as “mussels, shrimp, scallops, clams sautéed in a spicy marinara sauce over linguine.” Since we’re not big fans of seafood swimming in marinara sauce, Chris suggested that we order it the same way she does, with scampi sauce. We both started off with a ceasar salad. We thought that this was included with the meal – didn’t realize until later that there was an extra charge of $1.95 each plus an additional $1.00 charge for anchovies. Not a big deal – it was very good! Thoroughly enjoyed the seafood dish as well.And of course it was great seeing them again!

On Friday afternoon, we walked up to the Myakka Motorcoach Resort clubhouse where they had their weekly “Meet & Greet” cocktail hour up on the second floor patio. Beer & wine as well as munchies were provided by Ralf and Amber. Fun time! We met our neighbors, Don and Barbara, who were from Cape Cod. Interesting that there are a lot of people from MA in the area. Seems like every other license plate is from MA! Now I bet you are wondering about the Serengeti in the title aren’t you? Sorry I couldn’t resist adding that as an attention getter! Of course we didn’t hop on a plane to go there! But according to Fit Bit “even though I did not see any wildebeasts, giraffes or zebras (hmmm, I wonder if gators count?) on this trek, they presented me with one of their motivational awards, the Serengeti award, for having walked 500 miles, the same distance as the Serengeti, one of the 7 Natural Wonders of the World.”  It would be so much more motivational if the award included a couple of airline tickets! Sigh….

That was the extent of our adventures during our stay at Myakka River Motorcoach Resort. Just one more stop before we get to Riverbend for our closing!