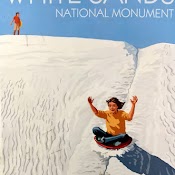 White sand dunes are obviously expected along the ocean shore, but in the middle of a New Mexico desert?

But yes! There are in fact almost 300 square miles of white sand dunes in this land locked state! Located about 60 miles from where we were staying at Hacienda RV Resort, the dazzling white sand dunes at White Sands National Monument drift, move and shift in the tucked away Tularosa Basin in southern New Mexico. Covering 275 square miles of the Chihuahuan Desert, White Sands is the largest gypsum dune field in the world. We were very surprised to learn the existence of these dunes is almost entirely due to the persistent winds in this desert valley.

We all know that gypsum is the main ingredient in drywall and in plaster of Paris to create surgical and orthopedic casts, but did you know it is also used as a food additive and that during your lifetime you will eat approximately 28 pounds of gypsum?  Gypsum (calcium sulfate) is recognized as acceptable for human consumption by the U.S. Food and Drug Administration for use as a dietary source of calcium, to condition water used in brewing beer, to control the tartness and clarity of wine, and as an ingredient in canned vegetables, flour, white bread, ice cream, blue cheese and other foods. 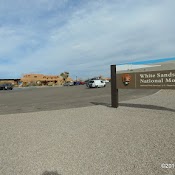 If we didn’t have such a long drive back to the resort, we would have liked to participate in one of the free tours offered by the Park Rangers especially the Sunset Walk, but unfortunately the timing of these tours didn’t work for us. Other tours include the Full Moon Hike, Full Moon Bike Ride, Lake Lucero Tour and several others. If you are planning on visiting here, be aware that from time to time, the nearby White Sands Missile Range performs missile tests which may close Highway 70 (the only way to get here) to traffic. 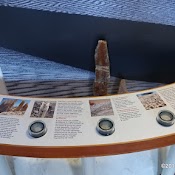 Depending on the nature of the testing, Dunes Drive (within the park) may also be closed during missile tests for visitor safety.

At the Visitor Center, there are many exhibits as well as a gift shop. An orientation video explains how the dunes were formed and how the white sands are actually gypsum crystals created by the evaporation of Lake Lucero and 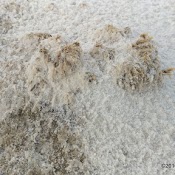 Alkali Flat, a remnant of the ancient Lake Otero. Rain and snow run off fill Lake Lucero with gypsum laden water temporarily. When the water evaporates selenite crystals (some as big as a bicycle tire) are formed which are then blown around by the wind. The wind causes the crystals to break down into smaller and smaller particles where they accumulate forming the brilliant 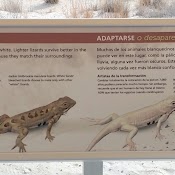 Read more details about the park geology and the formation of the gypsum dunes on the National Park Service website. The landscape here is not static but is constantly changing because of the blowing winds which move the dunes from west to east as much as 30 feet per year. Not only does the landscape constantly change, but some of the animals such as mice, lizards, moths, and other insects have changed over the centuries, adapting by gradually changing their color to reflect their environment.

Surprisingly plants survive here and are somehow able to find sources of water and nutrients in the sterile, gypsum sand. Shrubs and trees survive because their roots tap all the way down to the water table allowing them to absorb water. Hard mounds called pedestals 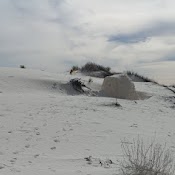 are formed as the water gets absorbed into the surrounding sand, 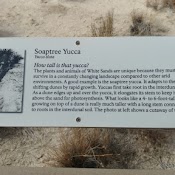 encasing the root structure and stabilizing the plant. Often these mounds are topped by Skunkbush Sumac and Hoary Rosemary Mint. The soaptree yucca which can grow up to 30 feet tall uses a process known as “stem elongation” to stay above the dune. Eventually, as the dune shifts, the stem can no longer support itself and topples over.

At most State or National Parks on the beach, numerous signs want you to stay off the shoreline dunes because they are so fragile. 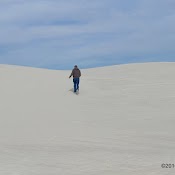 Not so here! Go ahead, walk anywhere you want. Don’t worry about covering up your footprints, the wind and gypsum will do that for you. For even more fun, you can dune sled using plastic snow saucers which can be purchased at the Visitor Center, – a new one is $15, a used one 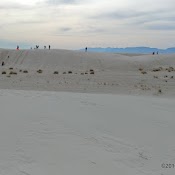 is $10 (and don’t forget to buy the wax for a faster sledding experience). Sounds expensive but don’t worry, at the end of the day, they will buy the saucer back from you for $7 (new) or $5 (used). Or better yet bring your own sled – we saw some kids sledding down the dunes using large pieces of cardboard! Pick any tall dune and away you go! We didn’t sled but it sure was fun watching other people try it. 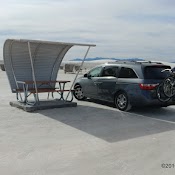 Dunes Drive is an eight-mile scenic drive suitable for cars, motorcycles, recreational vehicles and buses that leads from the visitor center into the heart of the gypsum dunefield. Constant “plowing” was evident in order to keep the roads clear. The first four miles of Dunes Drive is a road safety corridor where stopping is prohibited. The first five miles of Dunes Drive are paved and the last three miles are a hard-packed gypsum sand road. Along the road, there are outdoor exhibits, hiking trails, picnic areas, vault toilets, and parking areas. 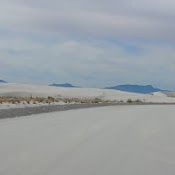 Hard to describe our initial feelings as we started out on the drive. Totally surreal. Eerie. Stark. Mystical. Dazzling. Like no place else on earth. It felt like we were in another world or on another planet or seeing a mirage. Unbelievable! Bordering the road were banks of sand. How much time and effort did it take on a daily basis to 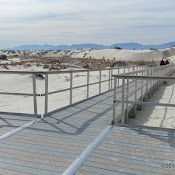 keep the drive passable we wondered. Must be a never ending job!

Along the drive, there are a number of trails for hiking and an interdune accessible boardwalk with numerous exhibits about the animals and plants. Although we saw people sledding at various spots along the way, it was the Primrose Picnic Area that was most active. Such fun watching the sledders, both adults and kids, and even more fun (at least for me) watching Rob gallop down the dune and then climbing back up again. I was exhausted just watching him!

White Sands may look familiar to you because many movies and documentaries have been filmed here and 90% of every make and model of cars produced in the United States have been to White Sands to photograph or film their featured cars.

After we completed the Dunes Drive, it was time to leave. What a lovely day! But our day wasn’t over yet. We had one more stop before heading back to our coach, stay tuned for details.