Located in southeast Arizona, the small rural community of Bowie (2010 population 449) was our next destination on our trek eastward. Considered high desert at an elevation of 3,750 feet, Bowie is surrounded by the picturesque mountains of Mount Graham reaching 10,710 feet to the north, Peloncillo Range to the east, Dos Cabezas Range to the southwest and the Chiricahua (Cheery-Cow-Uh) Mountains to the south. 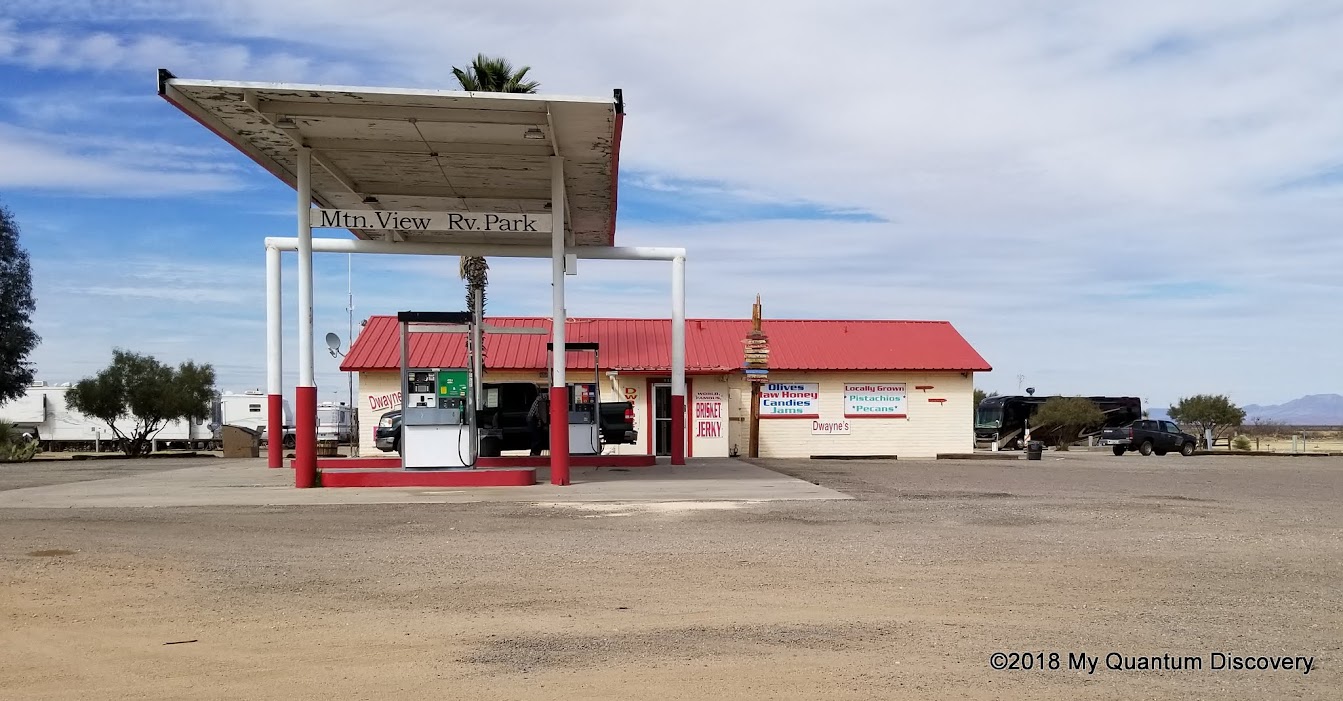 Mountain View RV Park, located right off I-10 next to Dwayne’s Fresh Jerky would be our home base for a two night stay. When we arrived, Rob wanted to fill up with diesel but was shocked when he saw the price on the pump – it was $3.39, about 50 cents more than other stations in AZ!  Inside the store, I checked in and perused all the goodies for sale. 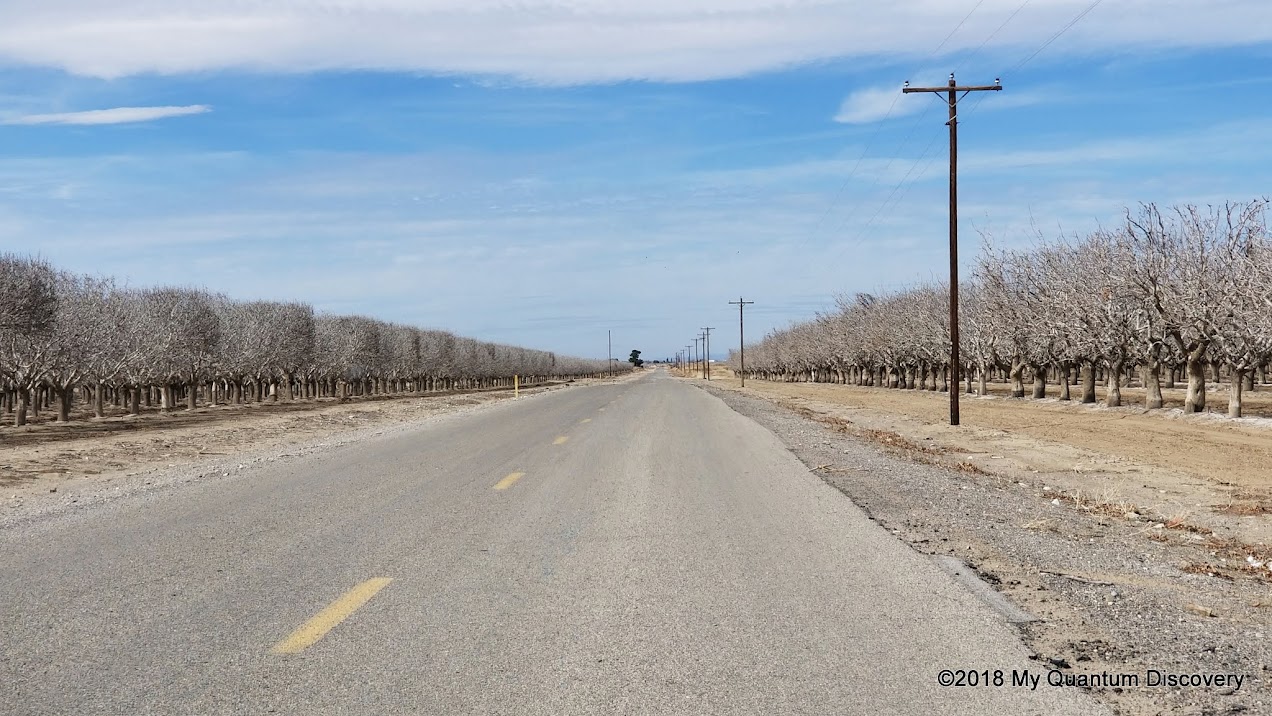 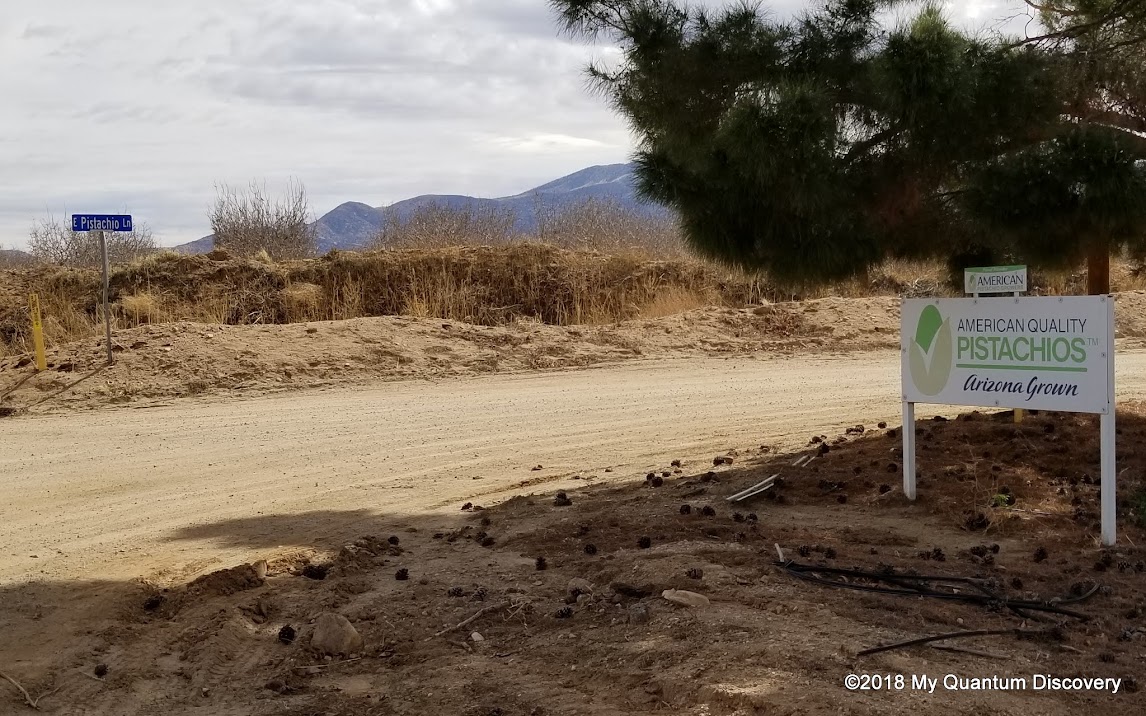 After seeing all of the pistachio trees and pecan trees in the area, we made another visit to the store before we left, sampling jerky, pistachio nuts (both flavored and plain), pecans, pickled garlic and other items. We didn’t really care for the flavored pistachios (just the shells had been flavored) but the plain ones were quite good, a lot fresher that what we find in grocery stores. Not being jerky fans, we were surprised that we liked the Dwayne’s Fresh Jerky that we sampled (Peppered Teriyaki). Made from brisket, it was more tender and easier to chew than samples we had tried at other places. 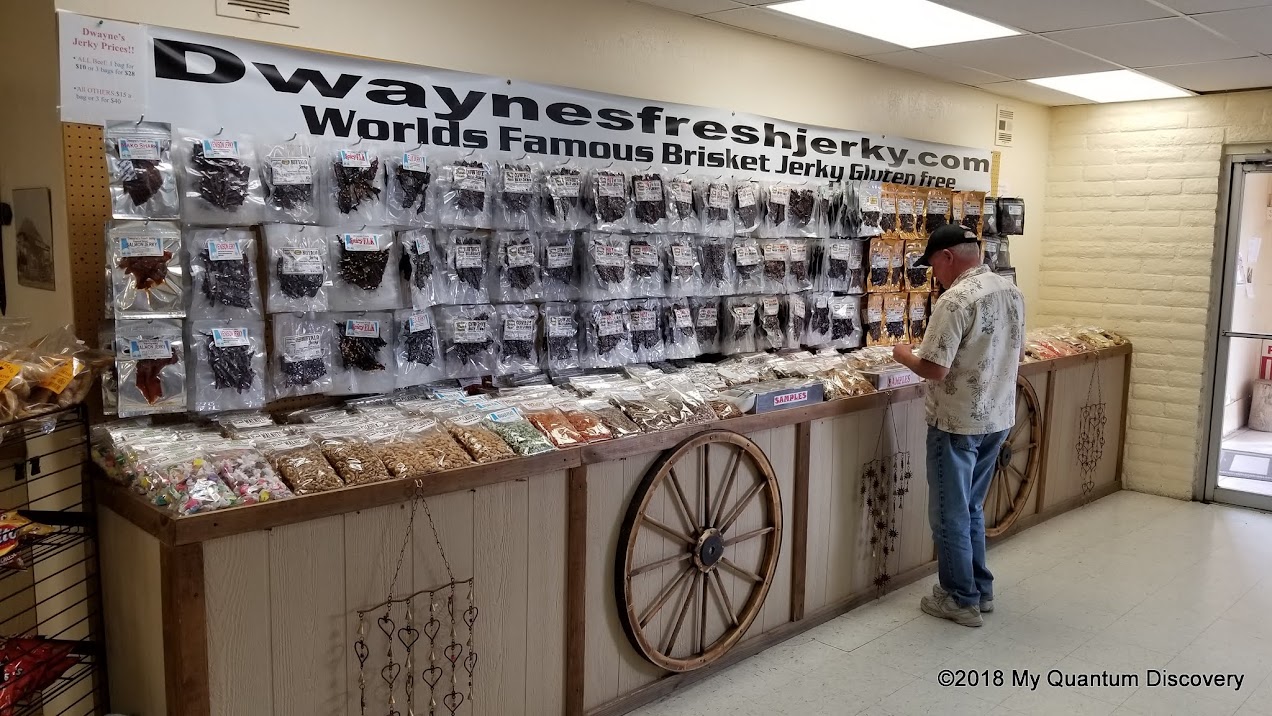 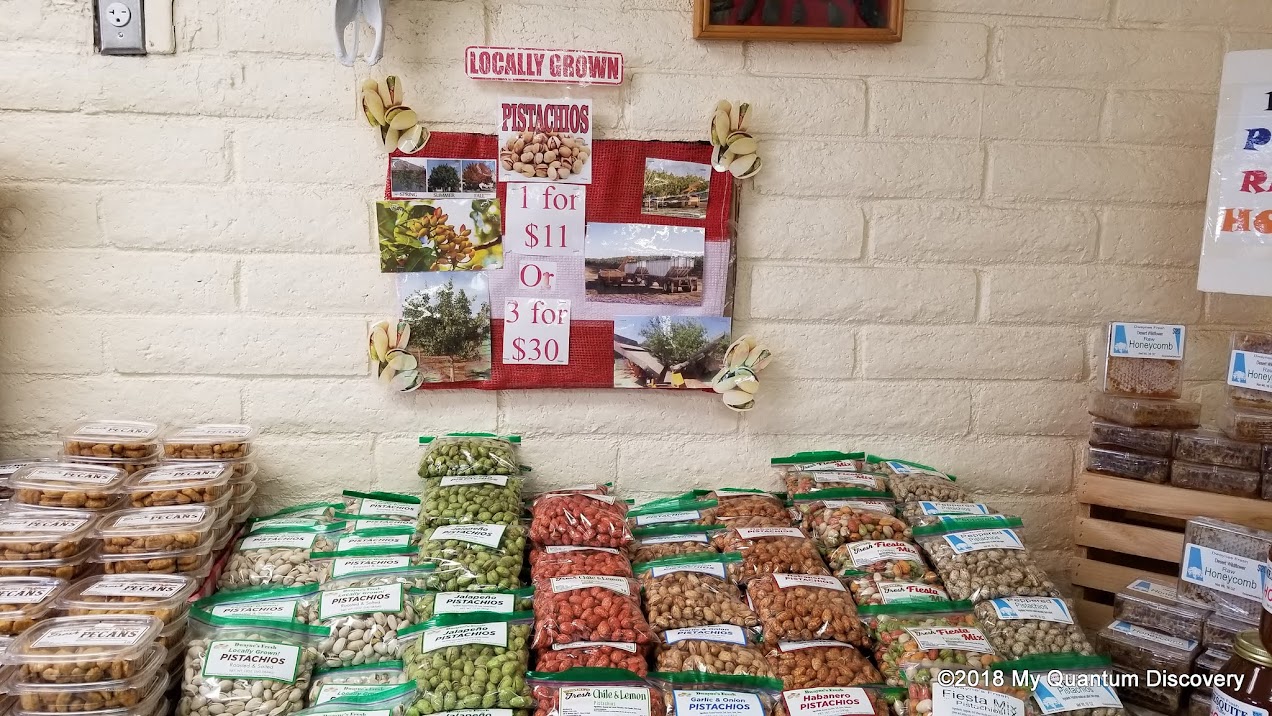 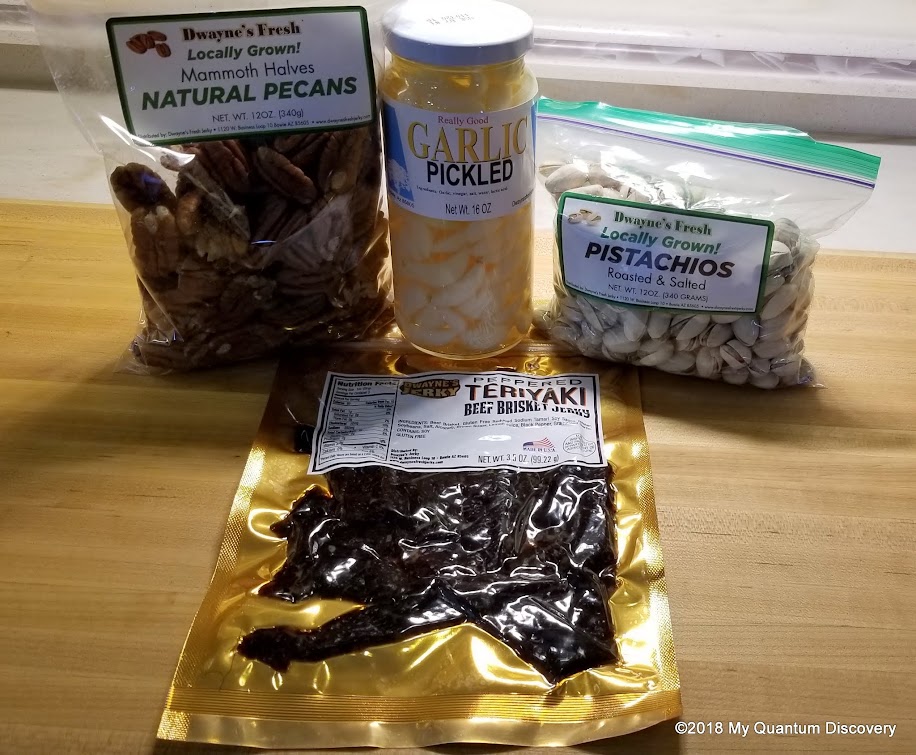 Our main reason for staying here, however, wasn’t for the goodies at Dwayne’s, instead it was a visit to Chiricahua National Monument. 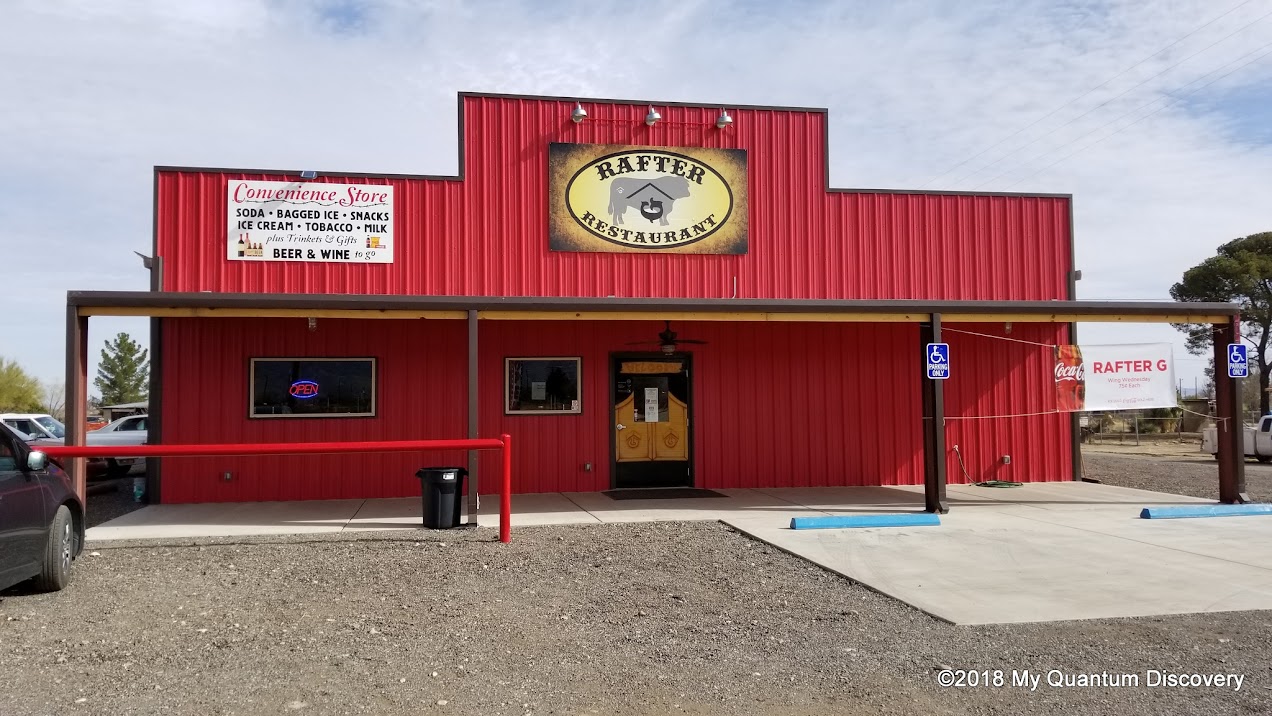 Our day started with breakfast at the Rafter G Restaurant which just opened in December, 2017. Cute, with Western decor and good food. Judging by the number of cowboys who came in while we were there, it appears to be the favorite local hangout, perhaps because it is the only restaurant in town! 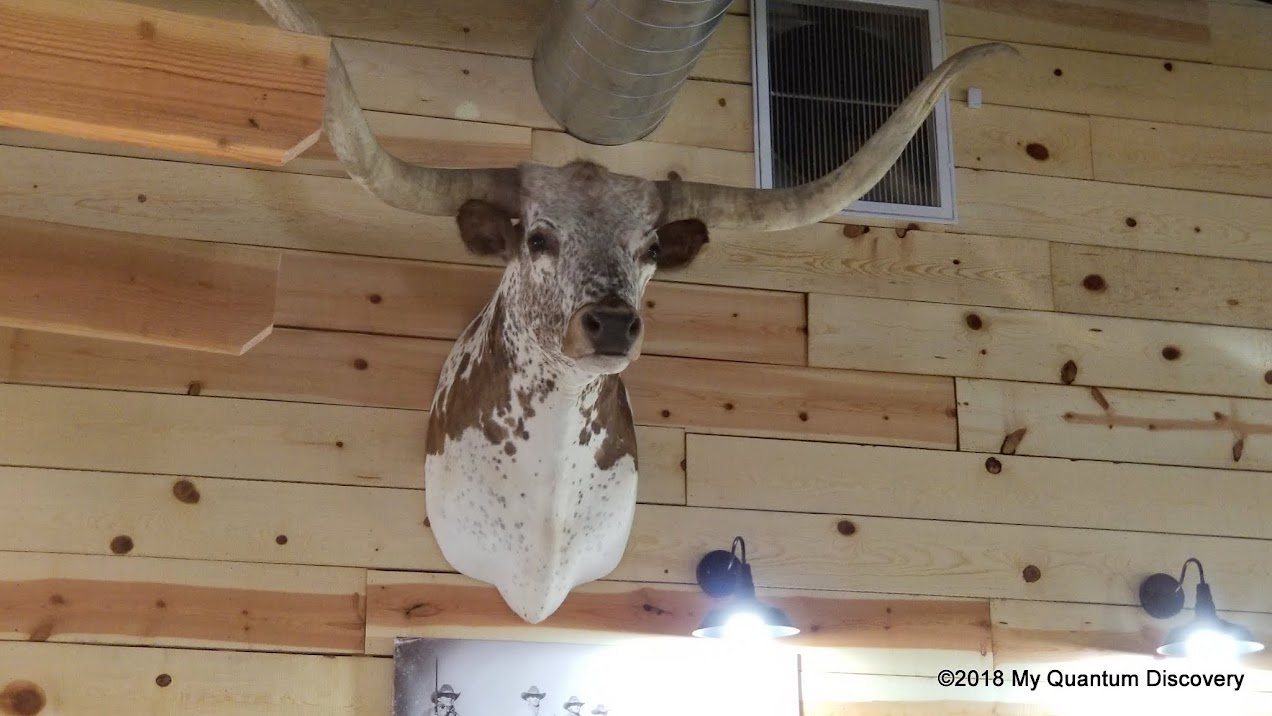 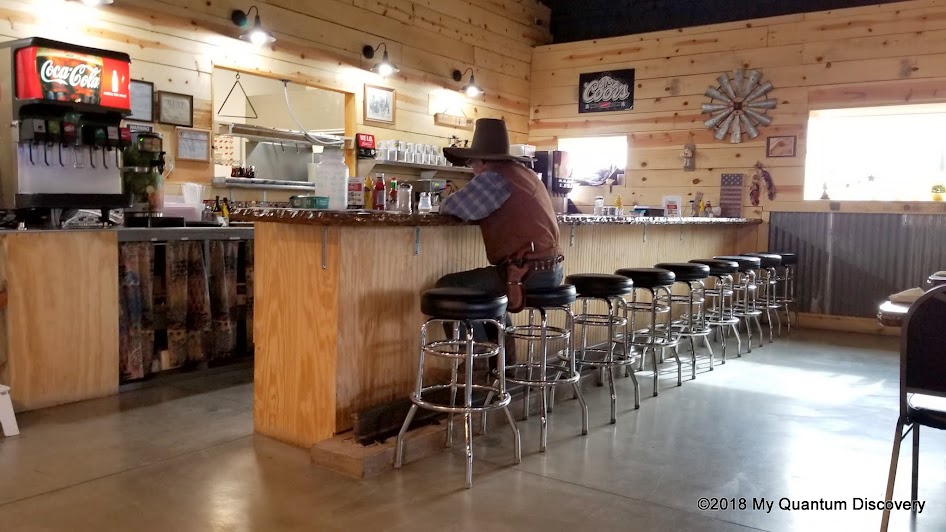 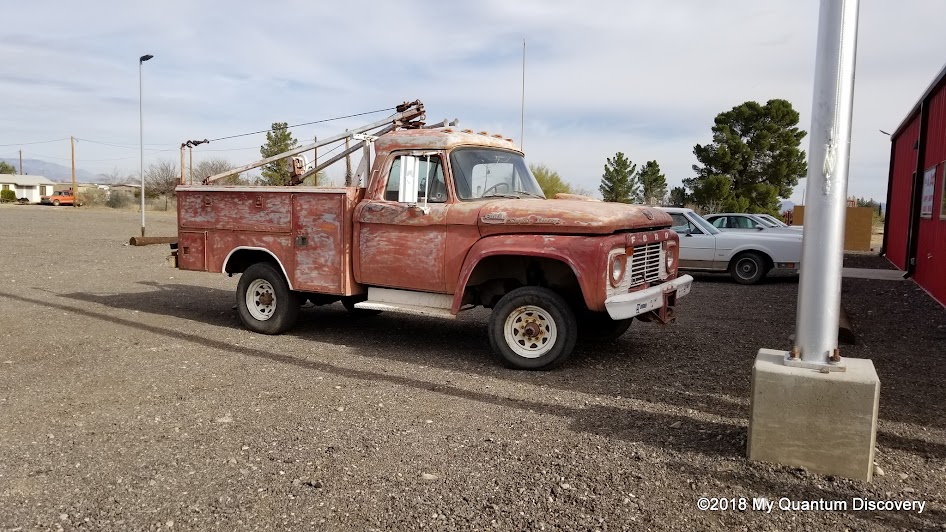 There were two options for our drive to Chiricahua. One was to backtrack on I-10 West, then turn onto AZ-186 East in Willcox, a total of 61 miles from Bowie and a little over an hour’s drive. The other option was to take Apache Pass Road, a more direct route south on a 19 mile road (9 of which is dirt) thru a mountain pass to AZ-186 which would shorten the journey to a total of 35 miles, but only save 3 minutes! Our hesitation about taking Apache Pass increased after finding it listed on the dangerous roads website. Since there wasn’t much difference in drive time and Rob wasn’t sure about the condition of the dirt road, he opted to take the first choice. Perhaps on the way back we would try Apache Pass.

Named by the Chiricahua Apaches who called these pinnacles “standing up rocks”, the formations found here were a result of eruptions from the Turkey Creek volcano 27 million years ago. Cooling and uplifting formed layers of gray rock called rhyolite. Eons of ice and water erosion left behind an endless variety of spires, balanced rocks and other shapes. Established in 1924 to preserve the extensive hoodoos and balancing rocks, the park consists of 12,025 acres, 84 percent of which is designated as wilderness.

The Chiricahua Mountain range is considered a “sky island” which means that it is a mountain range that is isolated from other ranges by intervening valleys of grassland and desert. It is here that the Sonoran and Chihuahuan deserts and the Rocky Mountain and the Sierra Madre ranges meet. The Chiricahua sky island which rises 9,763 feet is home to 1,200 species of plants and a variety of animals across four ecosystems.

After entering the monument property, but before reaching the Visitor Center, we stopped at the Erickson Cemetery. The Ericksons were Swedish immigrants who settled here in 1888. By the 1920s their eldest daughter and her husband Ed Riggs turned the homestead into a guest ranch known as Faraway Ranch. Tours of the ranch are given on Saturday and Sundays although more frequent tours are available in the spring. According to the reviews it is supposed to be quite interesting, but unfortunately the timing didn’t work out for us.

The Visitor Center is located two miles from the entrance to Chiricahua National Monument and is open daily from 8:30-4:30 pm Mountain Standard Time. Here there are not only exhibits relating to the geology, natural history and cultural history of the area but also a bookstore and gift shop. A park ranger provided us with a map and lots of advice, suggesting that we drive along the 8 mile Bonita Canyon Drive which winds through the oak, cypress and pine forests to Massai Point.

Gosh! It was hard to know where to look first once we started the drive. Taking photos out the window was a challenge because of all the trees and the gargantuan formations. But I tried – a stiff neck was my reward! Like so many other natural wonders that we have been too, this is one of those places where it’s hard to capture the magnificence and enormity of the rock formations in a photo.

There are a number of hiking trails throughout this wonderland of rocks. Although we didn’t have time to do all of them, we did manage to stretch our legs on the Massai Point Nature Trail (1/2 mile) and the Echo Canyon Grottoes Trail (1 mile). Although ranked as easy trails, some climbing was required plus all the loose rocks along the trails made walking a little unsteady. If you go, be aware once you park and leave your vehicle, the local jays seem to love walking all over cars and pecking at the windshield wipers and other parts! Doubt that they cause any damage but you never know!

This short video compilation, comprised of footage from the webcam in our van plus still photos, show the spectacular rock formations at Chiricahua National Monument!

While at the Visitor Center, we asked about the condition of the 19 mile Apache Pass Road – we were assured that despite the fact that 9 miles of the road was dirt, it was hard packed and relatively smooth so we decided to take it on the way home. This road would also bring us past the Fort Bowie National Historic Site which we were interested in seeing.

As part of the westward expansion of the US, thousands of people walked or rode across Apache Pass in the 19th century transporting food, clothing and supplies, stopping along the way at Apache Spring for water. In 1858, Congress established an overland mail route that passed through Apache Pass. In 1861, the Bascom Affair, a clash between the US Army and Cochise’s band of Chiricahua Apaches took place setting off a 10 year conflict. After Cochise attacked a column of California volunteers heading eastward, Fort Bowie was established in 1862. For more than 30 years Fort Bowie and Apache Pass were the focal point of military operations until in 1886, Geronimo surrendered and the Chiricahuas were banished to Florida and Alabama. The last garrison left Fort Bowie in 1894.

The road wasn’t bad at all, the southern section was wide, well graded and we could move along at a good clip. Glad we weren’t behind us though, our dust cloud could probably be seen 10 miles away! The dirt was a bright red flavor which changed the color of our van from a dark gray to a lovely rust color. 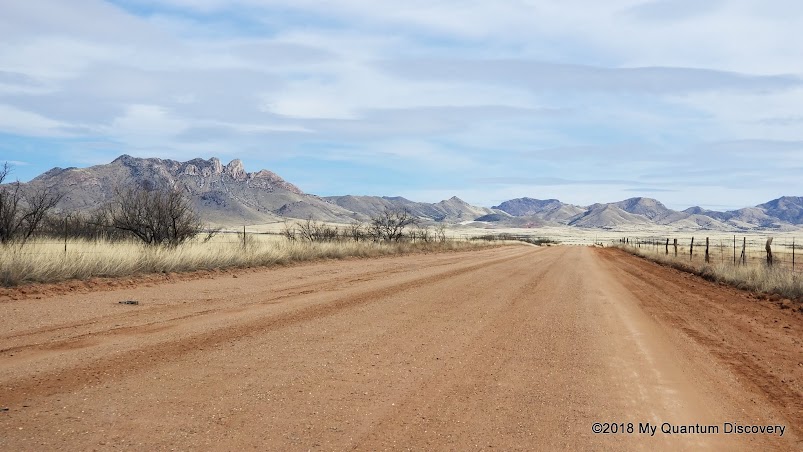 The middle part of the pass road south of Fort Bowie became steeper, narrower, curvy, hilly and a bit more bumpy, but still no issue for our decidedly not off-road equipped front wheel drive Honda minivan. The northernmost section of the road from Fort Bowie into the town of Bowie, is paved and passes through miles of Pecan and Pistachio Orchards.

Here is a short video of Apache Pass Road compiled from our dash cam and still photos of the area.

To actually visit the Visitor Center, see the ruins of Fort Bowie and the cemetery, it is a 3.0 mile round trip hike. After all the walking we had done earlier in the day at Chiricahua National Monument, somehow we just couldn’t muster up the ambition or energy to hike another 3 miles. Shame on us! After reading the few signs about the history of Fort Bowie, we jumped back in the van and continued our drive northward on Apache Pass Road, eventually arriving back to Bowie and the coach by late afternoon.

The next day we would leave Arizona behind us as we continued our journey east. More about that coming soon…