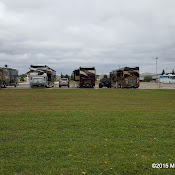 When we arrived here at Spartan Chassis in Charlotte, MI, we were happy to see that they had tripled the number of sites in their service lot (50A electric only) and had also erected a shelter with several picnic tables. Great idea! Nice to have a place where everyone can gather, especially during their week long classes. Now if only they would add a pump out station and a water spigot! Closest pump out is at the fairgrounds several miles away. Water is available at the front of the service building but that requires moving the coach.

It just so happened that our appointment was the same week as a scheduled Spartan/Entegra training class so there were several other Entegras in the parking lot (we attended the same class last year). It’s always fun meeting other Entegra owners! 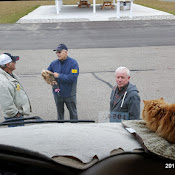 Once settled in to site #15, Rob spent some time chatting with a few other coach owners, then we walked down to the service area to meet with Chris McCord our service writer to confirm what we wanted done at this visit.

Except for the inspection and regular maintenance items, all the items would be warranty claims. Last year we were here for 10 days! Since our list was much shorter this year and we weren’t attending the Entegra training class, we were sure (or at least hoping) it would be a much shorter visit. 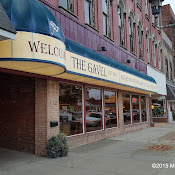 That night (Tuesday) we drove to downtown Charlotte and had 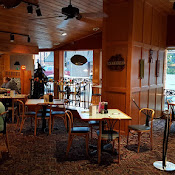 an early dinner at The Gavel Restaurant (we had a nice lunch there last year).  We both had their dinner special  – 1/2 rack of ribs, served with fries and cole slaw for $10.99. Surprisingly the ribs were excellent, very tender and tasty.

Knowing the service tech would be knocking on our door by 7:00 a.m., it was early to bed on Tuesday and 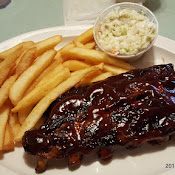 early rise on Wednesday. We had our usual dilemma – what to do with the kitties all day? Fortunately (for us, not them) this was easily resolved since the temps were relatively cool. They would stay in the back of the van in their luxurious (ha, ha) playpen, complete with litter box, food and water. Can’t say they were very happy about it but little did they know that it was probably better than sitting in a carrier in the waiting room surrounded by pooches!

After our coach was whisked away, we headed over to the Eaton Pub & Grill, another place we had been before, for breakfast. Then spent the day back in the Spartan lounge chatting with the other folks waiting and 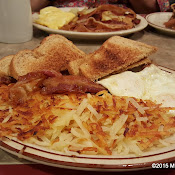 and doing some blog writing.

At the end of the day, the good news was that our coach was returned to us. Woo hoo! The bad news was that they weren’t quite finished. Boo hoo – another early wake up call on Thursday. But we can’t say enough good things about our service tech, Kyler. Super about explaining things, very professional and very conscientious. Found things during the inspection that weren’t really a problem now but could eventually be after our warranty expires in April 2016. He wanted to be sure that they were fixed now.

OK, one more early wake up call, I can deal with that. Plus when we were sitting in the lounge area, Greg Reinhold who arranges the training classes, recognized us from last year and stopped to chat. He invited us to join the training class the next morning for breakfast.

So on Thursday morning, after whisking the kitties into their playpen and getting an update from Kyler, we headed over to the classroom for breakfast. Made to order omelets, hashbrowns, bacon, french toast, fruit, Danish and muffins – can’t beat that, especially for free! It was great being able to talk to some of the management team and the service people again.

While we were eating, Greg went around the room introduced the Spartan team, then introduced us as “special guests” explaining to everyone that we had attended last year’s class. He made the point that anyone who has attended a class previously has an open invite to enjoy any of the training class meals if they are there for service while a class is going on. The food is so good it might be worthwhile to schedule service to coincide with a training class!

After we returned to the lounge to hang out, it was just a few hours later that Kyler came to tell us our coach was ready. Took some time for all the paperwork to be done, but we were out of there by 11:30 a.m. and back on the road.

Our destination would be Shipshewana Trading Places RV Park, 100 miles south which is located just 7 miles away from Entegra and our next stop. This park has full hookups and we planned to catch up on laundry during our weekend stay there.

Stay tuned for more about our stay in Shipshewana and Entegra!

For those with inquiring minds, here’s a summary of how our repair list panned out: