It’s always something! In this case it wasn’t too serious but nevertheless still disruptive to the routine. Of course I’m talking about our coach – it seems after 20 months we are still working out the bugs and early equipment failures! Good thing Entegra’s warranty is two years, the chassis is three and the engine/drivetrain are five!

On our way south this season the Tag Axle air bags started to give us some trouble. The Tag axle is the rearmost axle just behind the drive axle. Besides an extra set of brakes it doesn’t have any other active functions, it just kind of “tags along”. The Drive axle has four tires and the Tag has two. The main purpose of the Tag is to provide additional stability and load carrying capacity. In our case the Drive axle is capable of supporting 20,000 pounds and the Tag axle an additional 12,000 pounds. Tag axles are usually installed on coaches over 40′ and/or when heavy materials such as real wood and tile are employed on the interior.

All the axles on the coach are supported by air bags and under certain maneuvering conditions it is desirable to “dump” the air out of the Tag air bags. Dumping the Tag air bags is preferable when backing up or making very tight turns. Since the coach pivots on the drive axles the tag tires scuff during tight turns, dumping the air out of the tag axle suspension minimizes this tire wear. When backing up, should the tag axle encounter a high spot in the terrain, it could possibly lift the drive axles off the ground thereby preventing the coach from being able to move at all, again dumping the air should minimize or eliminate this possibility.

The Tag air bag dump is automatically initiated when placing the coach in reverse, or via a momentary switch on the console (affectionately known as the fart button) for those tight forward turns. The Tag dump mode is also speed sensitive and will only activate under 5mph. Additionally, only about one third of the air in the Tag bag is released. When the Tag bags are dumped you will hear air escaping for several seconds.

So anyway, in our case when initiating a Tag dump we would only hear a quick 1/2 second “psst”, then 4 or 5 seconds later another 1/2 second “psst” and so on. Definitely not dumping the volume of air it was supposed to. While this wasn’t a huge issue, it was something that should be addressed sooner rather than later.  I mean think about it, how would you feel if you could only fart in half second bursts?

When we arrived at Riverbend we began looking for a Spartan authorized shop to have a look at the problem. Being prime season in FL, RV oriented shops were hard to get into so we found Palm Truck in Fort Myers that was primarily focused on commercial trucks and could be a bit more accommodating.

Our first appointment was on 12/18 at 8AM and as expected it was a troubleshooting visit. The folks there were super friendly and helpful even though it was clear they don’t see all that many RV’s there. They had me back the rig into one of the service bays and demonstrate the problem, then off we went to find some breakfast. A couple hours later and they had narrowed the problem down to an electrically operated air solenoid. The part was ordered and off we went back to Riverbend.

On 12/29 we returned to Palm Truck to have the part installed. This only took about an hour and they did the swap out in the parking lot after I jacked the coach up using the leveling jacks. The fart button was now producing a nice long period of escaping air. Ahhhh, what a relief!

But wait, there’s more! In the process of getting the coach ready to head back to Palm Truck for the second visit, our entry steps broke. Geez, what timing! These steps are motorized and drop down when parked and fold up under the coach when driving. They would drop down and lock, but they would only retract up part way. I eventually figured out a way to hold them up enough with a ratchet strap clamp so they weren’t hanging too low and we hopefully wouldn’t wreck them completely while driving.

When we got back from Palm I called Entegra and they suggested it might just be a slipped gear. So I got to work and removed the motor but found that the small drive gear on the motor shaft had chipped a tooth. Upon further investigation I found the broken piece wedged between two of the teeth in the mating gear – this piece was preventing the steps from going back up.

Entegra and they began looking for a new part. Keep in mind at this point we are leaving Riverbend in just four days and one of those days was New Years. Turned out the manufacturer of the steps (Powergear) was

shut down for the Holidays so no help there, but Entegra managed to find a new motor at Camping World in Fort Myers. Even though Entegra would have also paid for the labor to install the part, I don’t mind doing simple repairs myself as it eliminates a lot of hassles – particularly if we have to pack up the coach (and the kitties) and go somewhere to have the work done as we did to Palm Truck.

We drove over to Camping World in the van and indeed they did have the $86 motor, but guess what? It didn’t come with the gear! Fortunately they did have a “repair kit” that included all the major components but was priced at $315. Entegra agreed to the cost anyway and off we went. 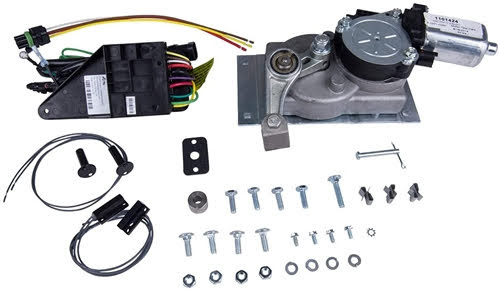 So if you think that’s the end of the story you’re wrong! The repair kit included the motor, gearbox and other components so I figured I’d just replace the entire assembly rather than messing with separating the motor from the gearbox, etc. There were only four 1/4″ bolts/nuts holding the assembly in place, piece of cake, right? Well those four bolts were rusted and three of them sheared off with out any effort on my part at all!

Oh crap, now what! At first I thought the bolts were welded studs and had a moment of panic. Then I realized they were short carriage bolts and replacements had come in the repair kit.

Problem was, the top of the step

assembly is a large steel plate with only 3/4″ clearance between it and the bottom of the coach and the bolt holes were way out of finger reach. After a few futile attempts with a parts grabber (that broke) I remembered an old trick. I found some thin solid core wire (CAT5 telecom cable I had on board), fished it thru the bolt hole and back out past the steel plate. I then wrapped the wire around the bolt threads, secured it with some thin tape and pulled the bolt thru its hole. The photo right gives the general concept. Worked perfect!

Now I could finally bolt the new assembly in place, but what should have been a 15 minute trivial job turned into a 3 hour endeavor.