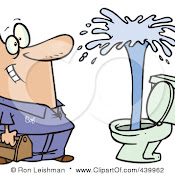 Yesterday (Sunday) was just one of those days.

The cats were coughing up furballs all over the place, and I was just one P&L report away from finishing up on our taxes. But as luck would have it the Quickbooks installation on Linda’s PC decided to call it quits and we couldn’t get to the report!

None of the various time consuming cures we tried would get it running again and we were starting to suspect a damaged database – yes we had backups but those wouldn’t work either!

In the midst of this annoying and aggravating financial crisis, all of a sudden in the back of the coach we hear running water and a geyser like sound. What the heck! Looking aft, the shower stall was doing an impression of Old Faithful and spewing gallons of grungy smelling water all over the place.

Yikes!!! After a few milliseconds of indecision I ran outside and sure enough “someone” forgot to leave the gray water valve open, so I quickly opened it and the geyser subsided.

Meanwhile Linda was frantically gathering every towel we had on board and trying to sop up the mess before it could soak too far into the carpeting – most of it was contained over the hard floor tile area in the kitchen, but the edges of the rug got wet. Later I found that two of the luggage compartments had some minor water intrusion as well.

Luckily, we had purchased a small wet/dry vac when we bought the coach perhaps envisioning such a calamity. It had never been used so we hurriedly assembled it and started sucking the water out of the rug. It worked quite well, but it was not a fun job. Funny too, I was thinking just the other day that we were never going to need this thing and I should probably take it off the coach to make room for a case of beer or something useful like that.

Due to what I can now officially claim to be a “senior moment”, apparently I never opened the gray water valve at all after we arrived here in Gulf Shores State Park. We had already been here a day and night, washed dishes and had done about four loads of wash and that was about all the tank could handle.

Well, I always speculated what would happen when the gray water tank overflows – now I have confirmation that my theory of the shower overflowing is correct – not a theory I really ever wanted to test!

What I didn’t expect though was the sudden appearance of a massive geyser! You would think a slow gurgle would be the first indication. I guess in retrospect it was fortunate that Quickbooks was giving us a hard time and we were still on board! Imagine the mess otherwise!

After about two hours of cleanup, we returned to the Quickbooks dilemma – it was solved by installing a fresh copy on my laptop – the taxes were mailed out this morning! Apparently Linda’s PC OS has some significant corruption and the system will need to be reloaded – that will probably have to wait until we get back up north.

So after a trying day all turned out well and we had a very nice campfire chat with Tina (Tie-na) & Robert next door (from Nashville) and their friend Pam.