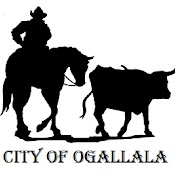 Ogallala, Nebraska? This town of approximately 4500 people definitely wasn’t on our bucket list of destinations to visit. But as we continued our journey west hoping to arrive in Colorado before the snow started flying, there weren’t a lot of choices of places to stay.  Surprisingly it turned out to be an enjoyable three night stay at the Country View Campground (review coming) with lots to do. Well, enjoyable except for the tornado watch we had one night while we were there which was a little nerve racking to say the least!

Named by the Sioux Indians, the origin of the town’s name means “scatter” or “to scatter one’s own”. In its early history, Ogallala was nothing more than a stop on the Union Pacific railroad but then it grew to be one of the most well known towns along the Texas Trail, a historic cattle trail used to drive cattle from Texas to Ogallala and other locations on the Union Pacific Railway. It is estimated that over a million cattle came up the Texas Trail 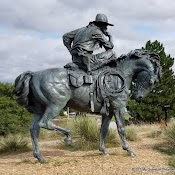 between 1870 and 1885 when it was known as the Gateway to the Northern Plains. With the cattle, came cowboys, gamblers, trail hands, trades people, drifters and prostitutes.

As the town grew slowly but steadily, gold flowed freely across the table and liquor flowed across the bar often resulting in gunfights, heralding in the beginning of Ogallala’s wild west days. With its high death rate, the town quickly earned that reputation of being the most violent town on the trail. In his book “Log of a Cowboy”, trail driver Andy Adams wrote, “We finally scaled the last divide and there below us in the valley of the South Platte River nestled Ogallala, the Gomorrah of the cattle trail. From amongst its half hundred buildings, no church spire pointed upward, but instead, ¾ of its business houses were dance halls, gambling houses and saloons.” 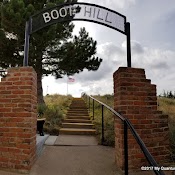 The rebellious cowboys looking for adventure often got more than they bargained for – these unfortunate souls were buried on the top of a treeless hill named Boot Hill north of town (with their boots on, hence the name). 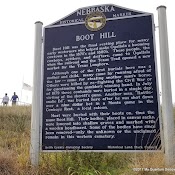 The wildness didn’t last long however because of a serious epidemic of Texas fever that swept over Nebraska and first appeared in Ogallala during the summer of 1884. Because the fever was brought in by cattle, ranchers demanded that Texas cattle be excluded from Nebraska. This ban of Texas Cattle was a damaging blow to the Texas trail herd business. The cattle industry no longer existed and the wild-violent town was reduced to a 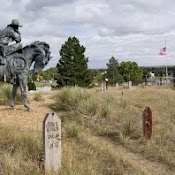 At least 48 bodies were laid to rest in the Boot Hill cemetery before it was  abandoned in 1885 when the cemetery west of town came into general use. Over time, wind and wear all but destroyed the few signs remaining of the old burial ground. In the 1960’s the local Jay 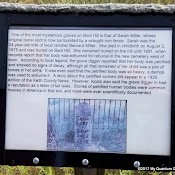 Cee’s organized an effort to treat Boot Hill with appropriate honor. The hill was cleaned up, trees were planted and early grave markers (mostly wood) were recovered or recreated. Boot Hill has now finally become an appropriate resting place for the known and unknown dead of an important era.

We spent an hour or so here wandering around the cemetery, reading about each of the people buried here, who they were and 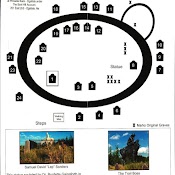 how they died. A pamphlet for a self guided tour is provided near the entrance to the cemetery at the base of the hill. 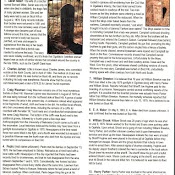 Sarah Miller, Craig Waxman, William Shook, Gertrude Fisher and Henry Parker were just a few of the names on the gravestones. Knowing the stories of the people buried here made them more real to us but it was still hard to imagine what life was like back in those days! How difficult and dangerous it must have been.

Many of the men died violent deaths during gunfights, several women died in child birth and another woman was a victim of a typhoid epidemic. A few of the graves had no names but were merely 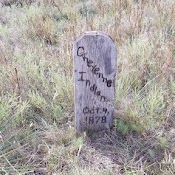 labeled “Unknown” or “Cheyenne Warrior”. Another was labeled “3 Union Pacific Workers”, who were having lunch when they were attacked and killed by Lakota warriors. One of the last burials on Boot Hill was believed to be that of Edward Worley, also known as “Rattlesnake Ed Worley”. Worley was shot by fellow gambler Lank Keyes in a saloon on August 17 or 18, 1884 over a $9 bet. 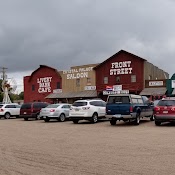 n as the Trail Boss, representing the Texas cattle drover from the early years of the cattle drives. He looks out over the graves, the town of Ogallala and the trail to Texas.

Front Street is a replica front of some typical businesses that could be seen along streets in the old western towns. At the Crystal Palace Saloon (named after the original Crystal Palace built in 1875), the Crystal Palace Review and Shoot Out has earned the title of being Nebraska’s longest-running summer theater, a musical comedy family show where dance hall girls kick up their heels and sho 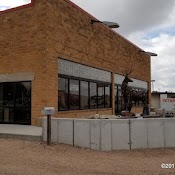 ts ring out. In addition to the restaurant there is a gift shop and a museum. Unfortunately for us, except for the restaurant, everything was closed.

Since we so enjoyed our visit to Jim Gray’s Petrified 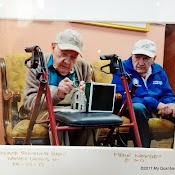 Wood Company in Holbrook, AZ near the Petrified Forest last spring, we couldn’t resist stopping at the Petrified Wood Gallery  located across the street from Front Street.

This gallery holds the collections of twin brothers, Howard and Harvey Kenfield (now in their 90’s) who began collecting in the 1950’s. One of the brothers personally greeted us and explained the layout of the gallery. Visiting the gallery is free but donations are appreciated. 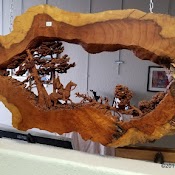 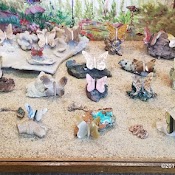 Oh my, what beautiful displays of ancient woods and fossils from around the world plus Native American arrowheads and artifacts as well as the artwork of visiting artists and “on-loan” exhibits from other collectors.

But what we found most fascinating was the original, miniature, three-dimensional buildings, music boxes and objects the brothers had fashioned entirely out of petrified wood. A short video shows how 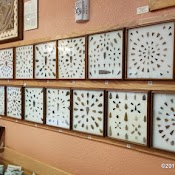 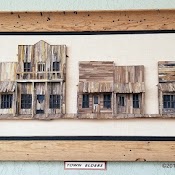 they painstakingly cut, sanded and glued each piece. Houses, grain elevators, grist mills, churches, wagons, an outhouse and even ice cream buckets are created out of narrow, brittle strips of petrified wood, looking similar to weathered barn wood. Definitely worth a visit! 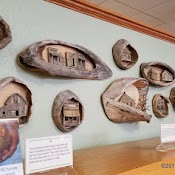 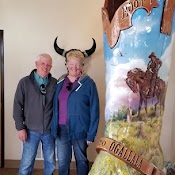 Lake McConaughy. Lake McConaughy is a reservoir which is 22 miles long and 142 feet deep formed by Kingsley Dam. At over 162 feet high, 3.1 miles long, with 26 million cubic yards of material, Kingsley Dam is the second largest, hydraulic fill dam in the world.

Perched on a bluff one-quarter mile south of Kingsley Dam is the Lake McConaughy Visitors Center and Water Interpretive Center. 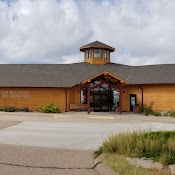 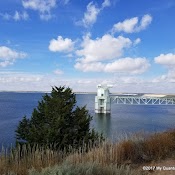 The Visitors Center features a huge aquarium, donated by Cabela’s, interactive educational exhibits on the Platte River and High Plains Aquifer and offers a film about the construction of the Kingsley Dam.

Activities at the lake weren’t that busy when we were there due to the time of year, but during the peak seasons, it must be a very popular spot for boating, swimming, camping, deer and game bird hunting, fishing, hiking and biking. It was such a beautiful day, perfect for a drive around the lake. 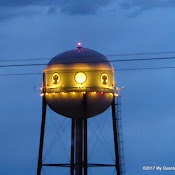 Pretty amusing that even though this town is dubbed the Cowboy Capital of NE, their water tower doesn’t reflect that! Instead it was painted like a giant alien spaceship with little green aliens peeking out of the windows.

Stumbling across these small towns, places where we can learn so much about the history of this wonderful country is what we love about this lifestyle. Although Ogallala wasn’t on our list of destinations to visit, we thoroughly enjoyed our short stay here. But it was time to say goodbye to the Cowboy Capital of the World and move on to our next destination…..stay tuned!