After departing Topsail, it was off to our RV lot at Riverbend Motorcoach Resort in Labelle, FL where we planned on spending the rest of the month of December to prep the lot for our renters.

As mentioned in our previous post, there was no sign of any significant damage from Hurricane Michael in the Santa Rosa Beach area. But as we traveled along I-10 eastward, the wrath of the storm became quite apparent. Of course, we had seen images of the destruction from this Category 4 hurricane on TV but it didn’t compare to seeing the damage in person and we weren’t even anywhere near ground zero. Totally unbelievable! For miles and miles, fallen trees littered the sides of the highway.  And where the trees hadn’t actually been toppled, they had been sheared in half. 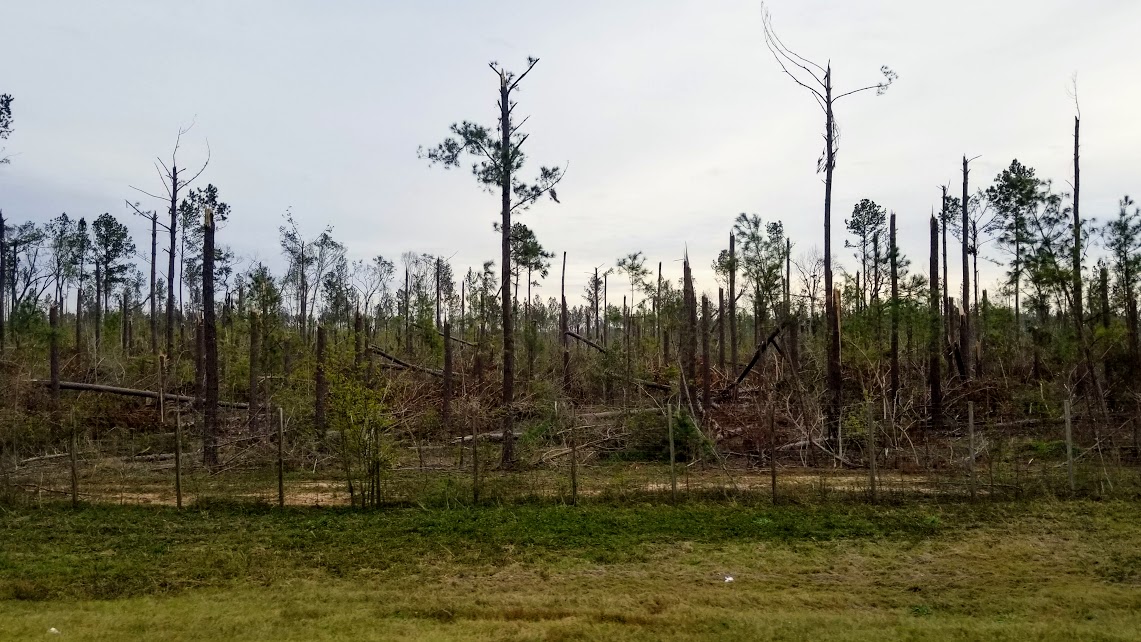 Even billboards and DOT signs hadn’t weathered the storm – most had been toppled by the strong winds.

It was easy to understand why I-10 had been closed for some time after the hurricane so they could clean up the highway. And here it was a month later and on a Saturday and there were still crews out cleaning up the huge piles of debris along the side of the highway and in the rest areas. 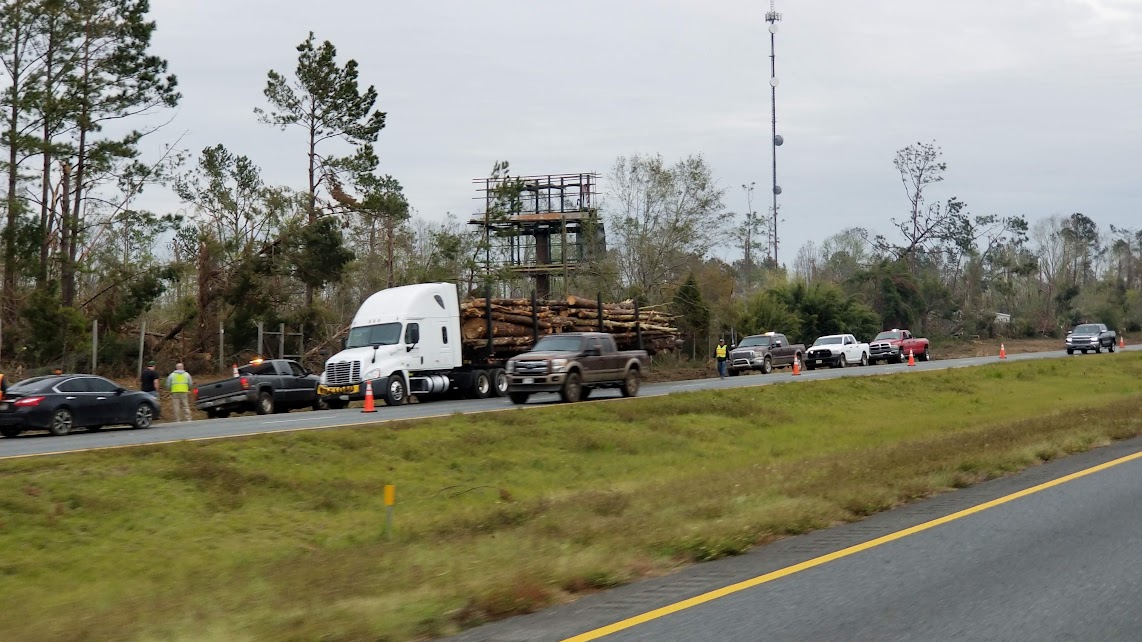 We had decided to take advantage of our Harvest Hosts membership and stay overnight at the Tallahassee Auto Museum since it was very close to the interstate. When I called that morning, the contact person listed on the HH website was not there – in case you go, be aware that she doesn’t work on weekends. But we were told by the staff person who answered the phone that there was plenty of room. Yep, that’s for sure – we were the only RV there that night! 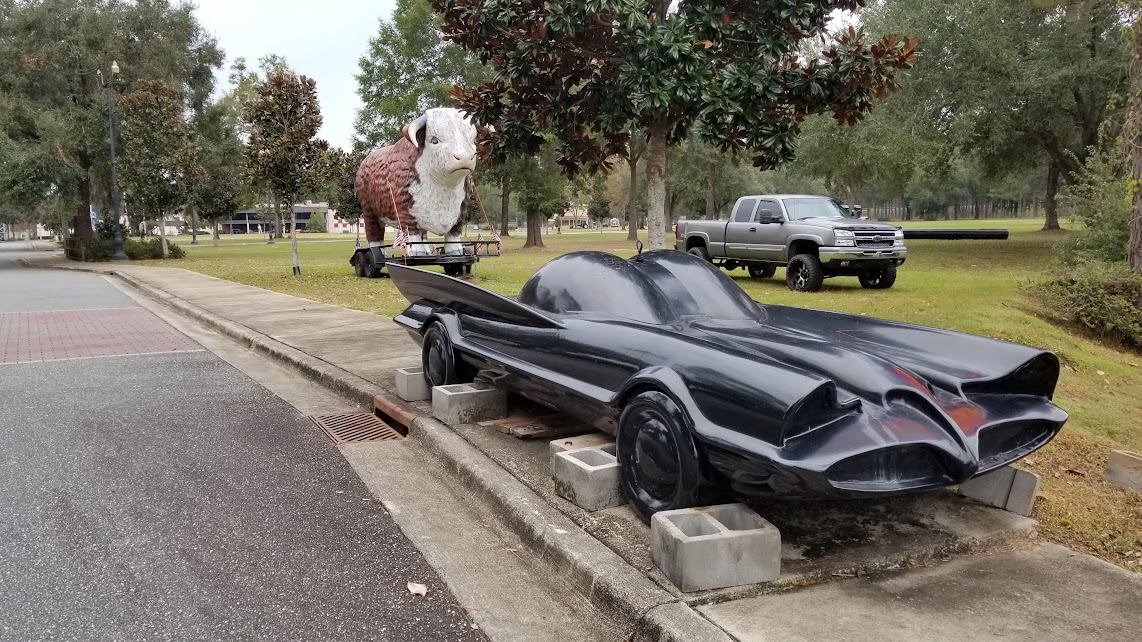 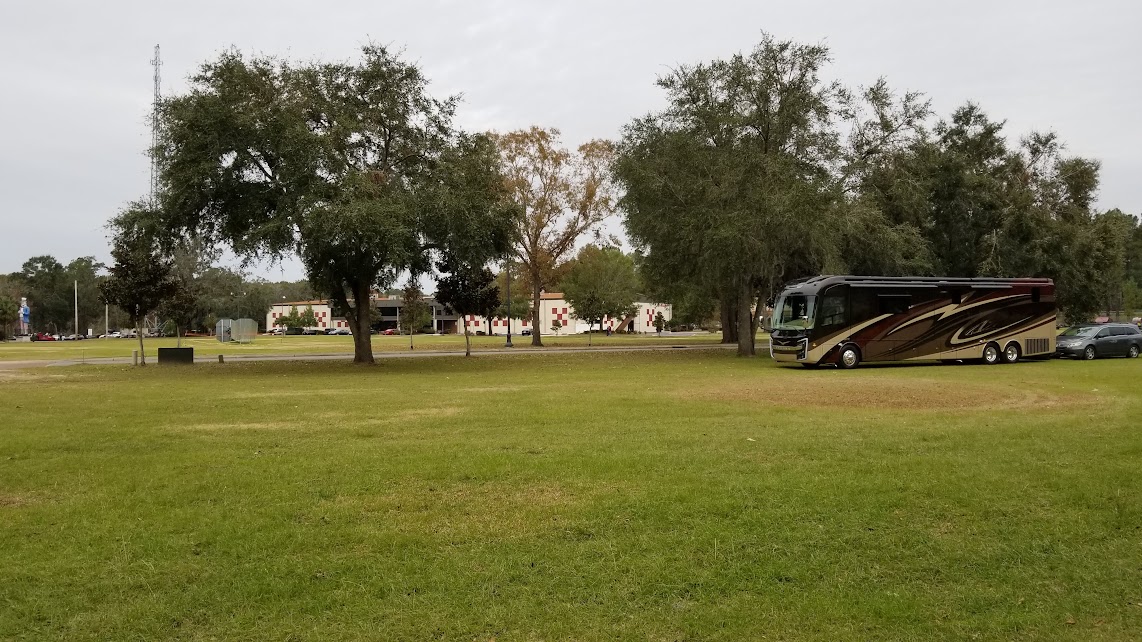 Besides automobile (and Batmobiles), the museum houses a variety of collectibles, everything from knives, to cash registers, to outboard motors, to fishing lures, to dolls. According to Roadside America, “95 percent of everything in the museum is made in the USA!” 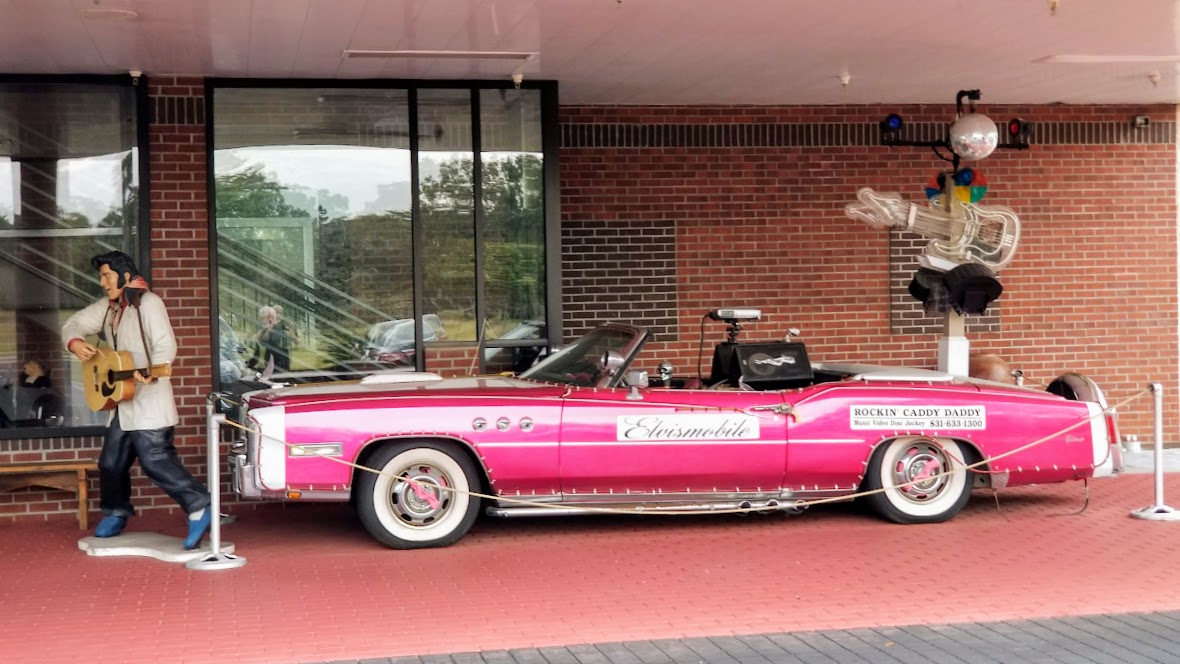 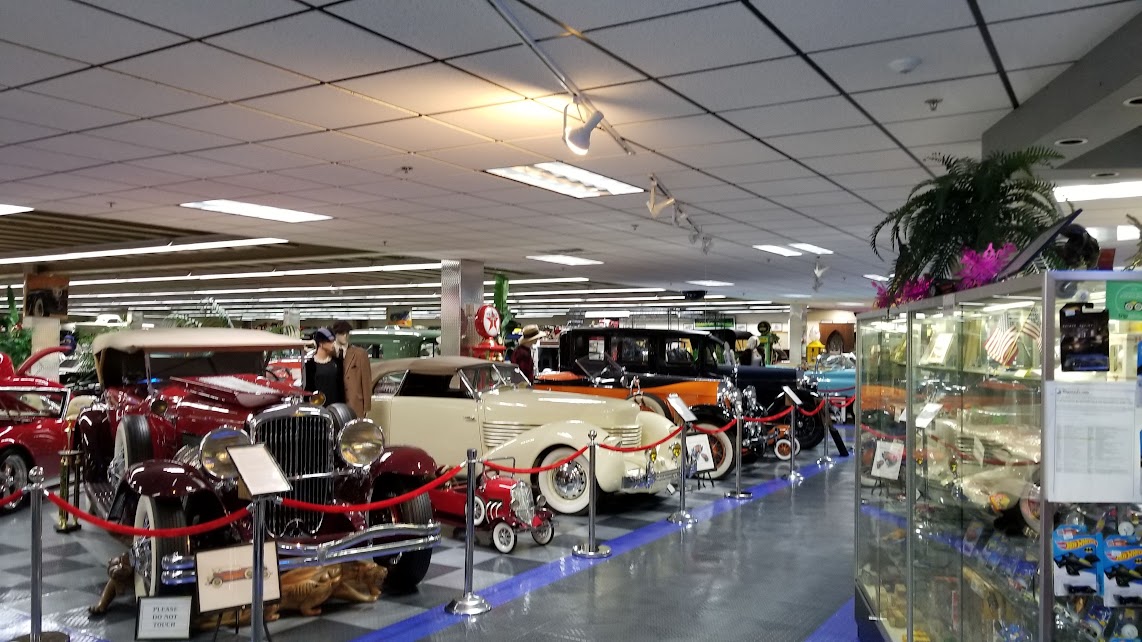 Alas, we wouldn’t get to see any of it since we arrived later than we expected, just an hour before closing. Moving from one time zone (Central) to another (Eastern) always seems to foil our best laid plans! Disappointing because it looked pretty neat! Next time!

In the morning we headed to our next stop, Blueberry Hill RV Resort in Bushnell, about a 2-1/2 drive. Not the greatest driving day – showers off and on with an occasional torrential downpour. All the sites here are pull thrus but be forewarned, there was not enough room for both the coach and the van so we had to unhitch anyway to fit on the site. Nice enough park with lots of amenities and a very reasonable Passport America rate ($21.50). 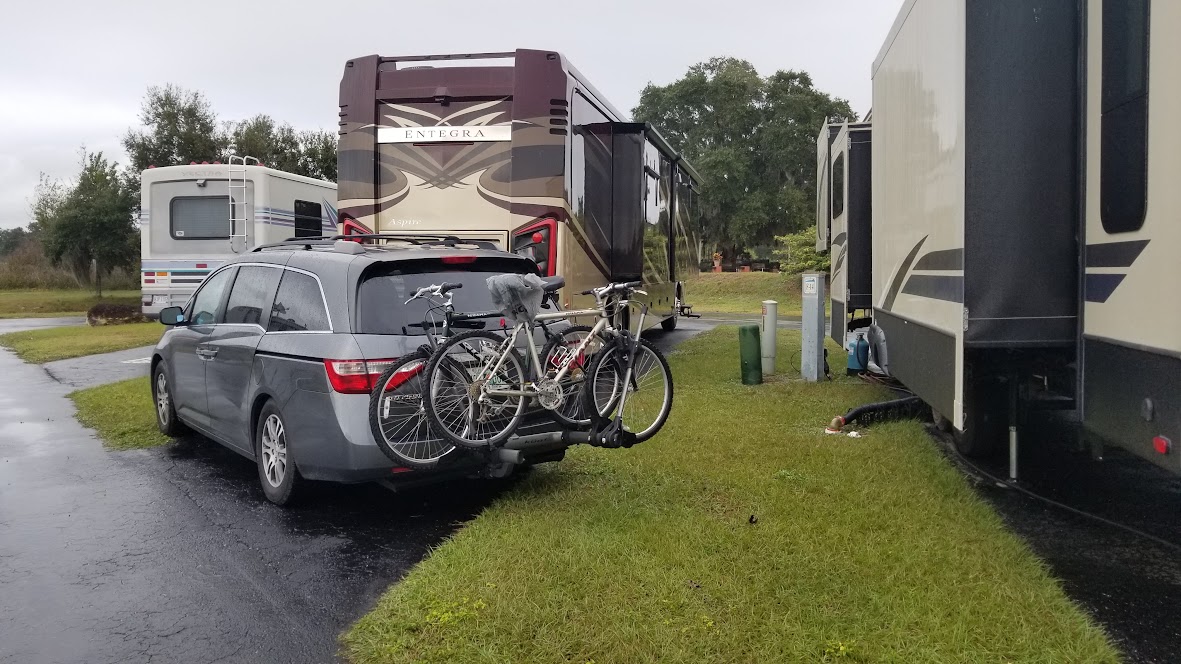 Before heading out the next morning, we had a quick but very good and inexpensive breakfast at Darrell’s Diner. 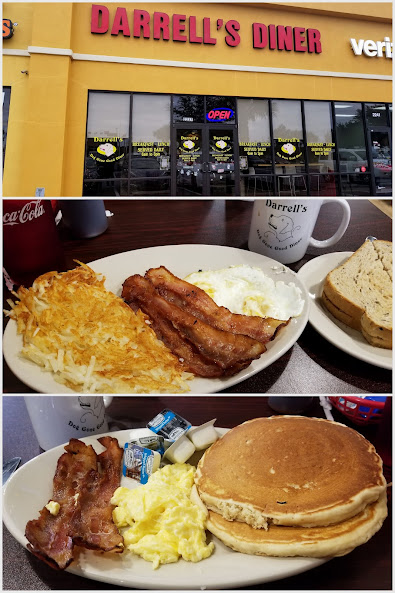 From Blueberry Hill it was about another 200 miles before we arrived at Riverbend Motorcoach Resort. Despite the fact that we haven’t been there that much since we bought it in 2015 (because of our rentals), it felt like we had arrived “home”.  All of our trees, shrubs and bushes had grown by leaps and bounds over the wet and hot summer despite the continual trimming by our landscaper, Jim at New Look Landscaping.

Once we settled in, the work began, the start of a busy few weeks! First on the to do list was to move all of our patio furniture outside which includes a patio table with 4 chairs and umbrella, a firepit with 4 chairs and an articulating umbrella.

That was followed by a quick get together with our landscaper, a separate meeting with our realtor to renew our contract (yes, our site is up for sale but our thoughts on that change from minute to minute), organizing and making a few repairs on our coach house, power washing the site pad, shopping for new batteries for our golf cart (didn’t buy any yet), ordering covers for the fire pit, chairs and golf cart and Rob expanding the capabilities of our lighting system on the coach.

Mixed in with all of that were visits with our next door neighbors and other friends in the resort including a couple we had met in Maine last summer (Joe and Joan, Anthem Entegra owners) who had rented a lot here so it was fun seeing them again. On our previous visits, there were only a few Entegra coaches in the resort, but this year there we counted at least 15. In fact, no matter where we stay these days, we are no longer the only Entegra. My, how Entegra has grown since 2013!

Boy, was Sparky in kitty heaven during our stay! Because of the denser landscaping, which minimized his opportunity to wander away, as long as he behaved himself, we allowed him out on the pad when we were outside. Stalking Anole lizards and various bugs, chasing leaves dancing across the site, lounging on the seat of the golf cart, being taken for a ride around the resort and investigating every nook and cranny of the coach house was pure kitty joy! 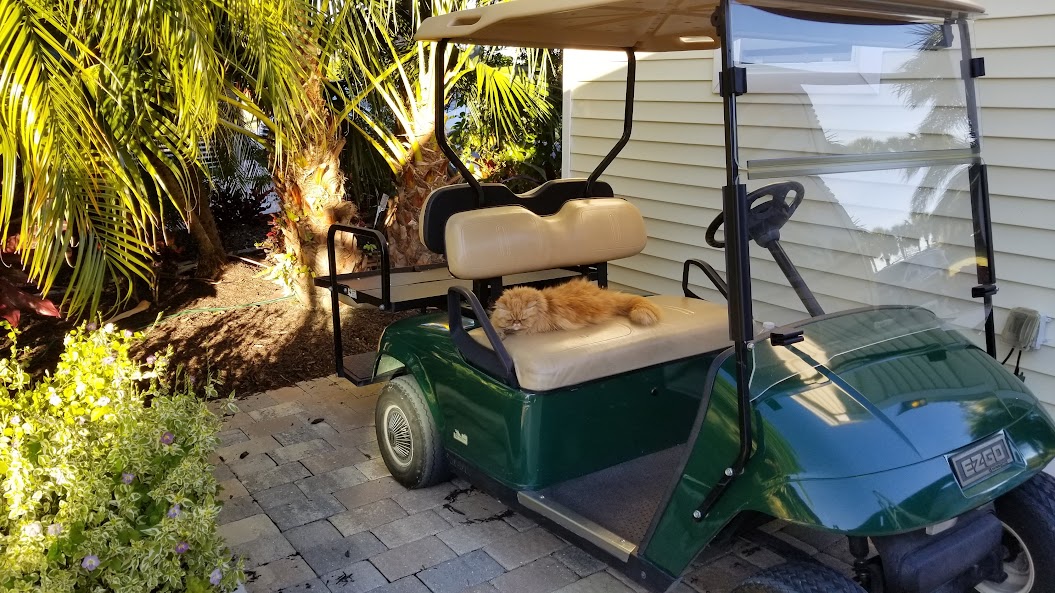 For us, it wasn’t heaven since he loved rolling around in the mulch – his long fur was a magnet for the stuff, constantly making a mess on the site and the inside the coach! 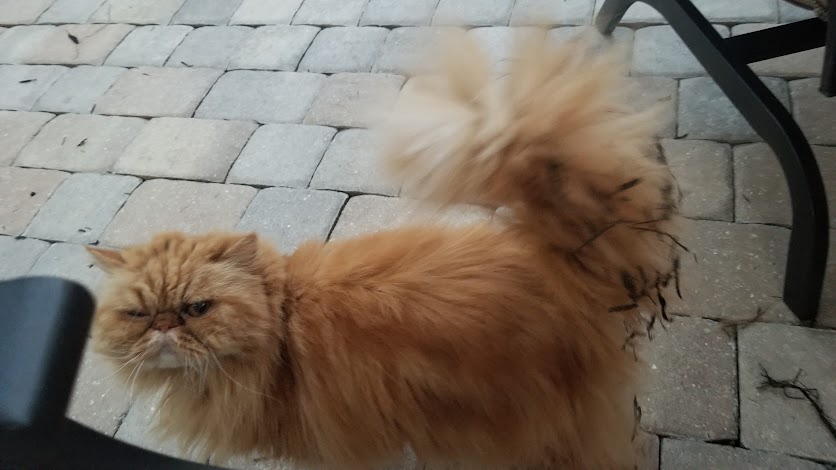 And then at the end of the day when we brought him inside, it became kitty hell for us as he strongly voiced his displeasure at being inside! He’s been screaming ever since!

Mixed in with all the work and socializing were visits to some of our favorite restaurants in the area. Alva Diner for breakfast where we both had their delicious bacon and cheese omelette. On our first visit we commented that the omelette seemed smaller than the last time we were there. Later we heard that there were new owners so maybe that is why. No big deal, it was good anyway. Later during our stay we enjoyed a delicious lunch of a broasted 1/2 chicken which was so good, the night before our departure we ordered takeout – a 12 piece bucket of their broasted chicken ($12.99) plus a $3.00 upcharge for all white meat. That kept us fed for a few days on the road! 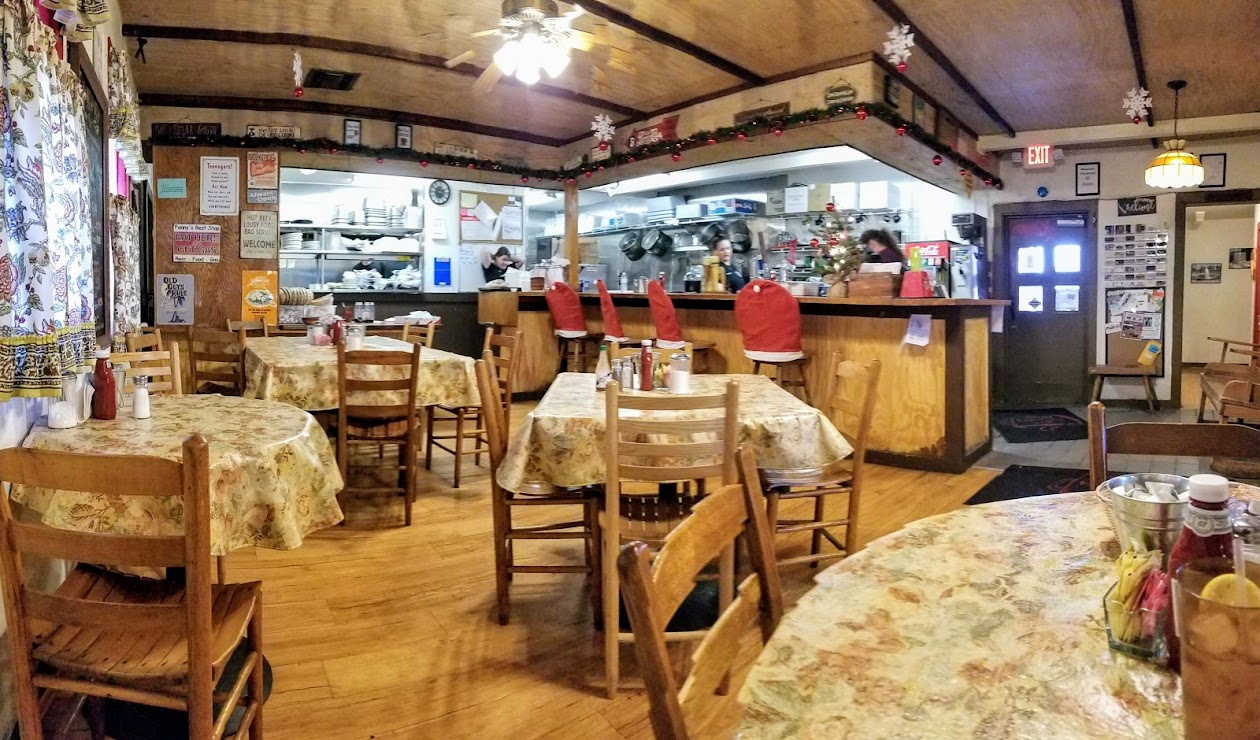 At the Log Cabin in Labelle, we had decent, relatively inexpensive breakfasts several times. 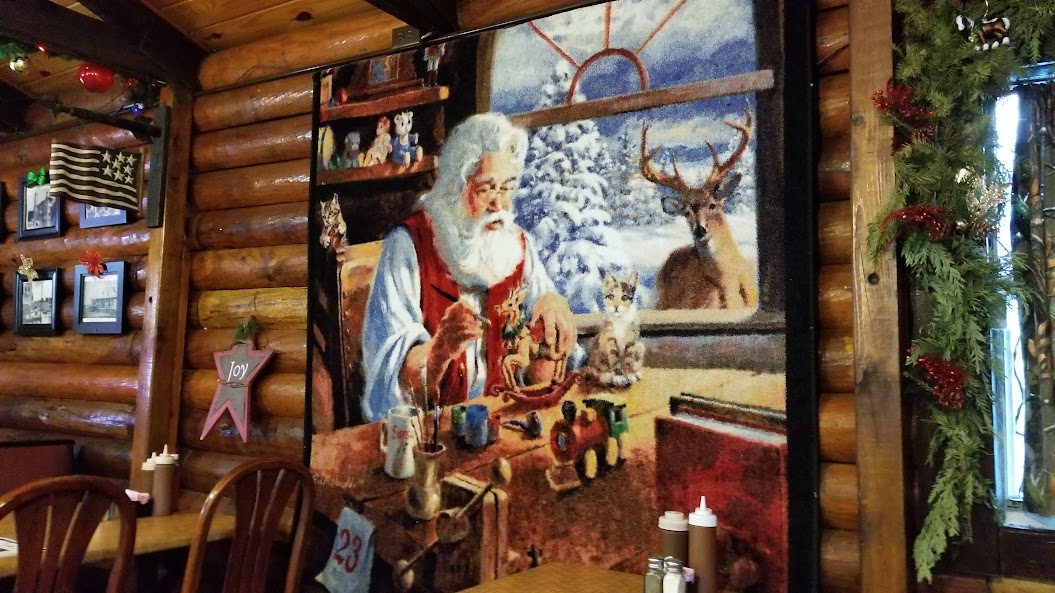 On our way to Sam’s Club in Fort Myers, we stopped at Mel’s Diner. We’ve always had really good breakfasts here in the past but this time it didn’t seem quite as good as usual.

As usual when we are at Riverbend, we take a ride to North Fort Myers to have dinner and visit with our former yacht club comrades and good friends, Chris and Bob who have a beautiful home there and are now full time Floridians. At Bianca’s Ristorante, Rob and I both had the delicious Chicken Marissa which is chicken sautéed in lemon & wine with sun dried tomtaoes, topped with goat cheese, garnished with fresh basil and served with asparagus. We’ve been to this restaurant three times and each time I have had this dish. Hmmm, d’ya think I like it?

Just before Christmas our streak of nice weather was interrupted. The severe thunderstorm warning that was in the forecast quickly turned into a tornado watch, then became the dreaded tornado warning in Alva just a few miles from us!  UGH! 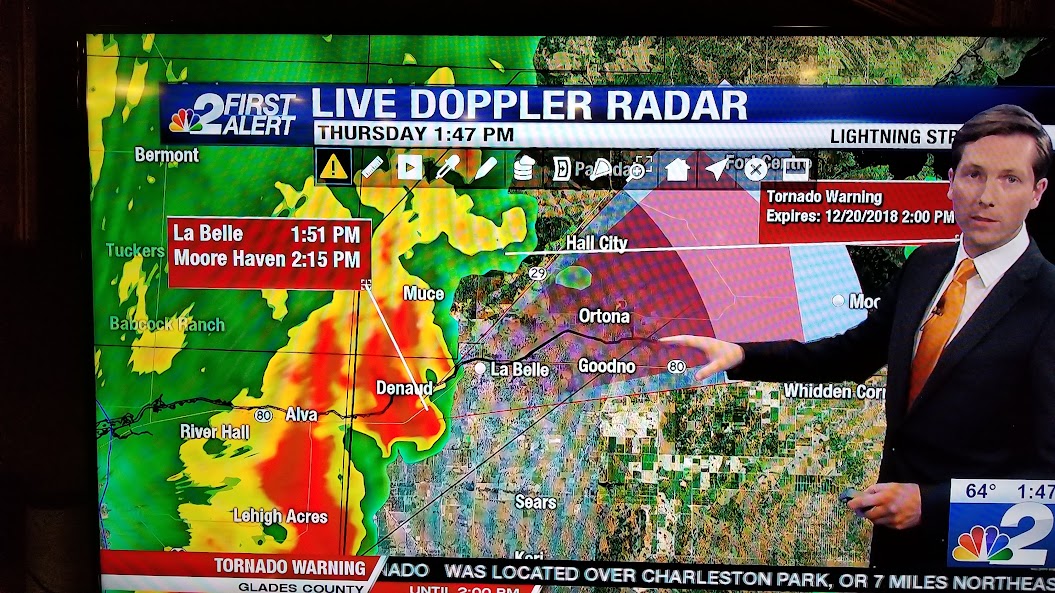 As we debated where to go (Riverbend doesn’t have an “official” tornado shelter but recommends sheltering in the bathhouses or clubhouse or designated buildings in the town of Labelle), the radar showed that the danger had already passed by Riverbend.  As far as we know, an actual tornado never touched down anywhere. Whew! What a relief!

Christmas dinner was being offered again at the clubhouse this year but the main course was being catered by Cracker Barrel (turkey, dressing, mashed potatoes and gravy) and pot luck sides and desserts would be provided by the attendees. Not being big fans of Crapper Barrel, we opted not to attend, instead enjoying a pleasant day together. For dinner, I made the same meal we used to serve to our families when we had our house – honey baked ham, Delmonico potatoes, curried fruit and green beans with sauteed shallots and vermouth. Delish (if I do say so myself) and lots of leftovers!

As the temps cooled at the end of the day, we would sit outside enjoying the warmth provided by the firepit. What a great way to watch the beautiful sunset. 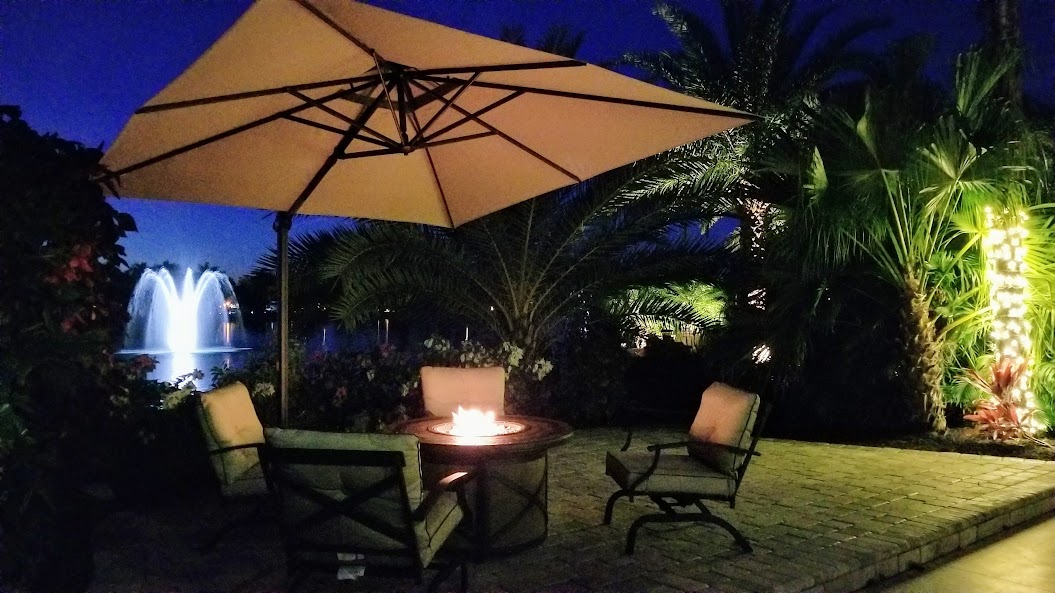 Before we knew it, New Year’s Day was upon us which meant our renters would be arriving. Time for us to hit the road again and continue our journey. But it wouldn’t be our last visit to Riverbend this year – we will be returning in April after our renters departed to put all of our patio furniture away in prep for hurricane season.

Where to next? You’ll soon find out!