After forty eight days, our volunteer stint at Topsail Hill Preserve State Park came to an end – December 1st was the day we returned to our carefree life as retirees. Considering that out of the 48 days only 6.6% of the hours we were there were working hours (we worked 19 days for 4 hours a day each). Compared to the 50-60 hour workweek we had to endure in our corporate lives, our volunteering schedule was relatively easy peasy (even though we are now 20 years older). 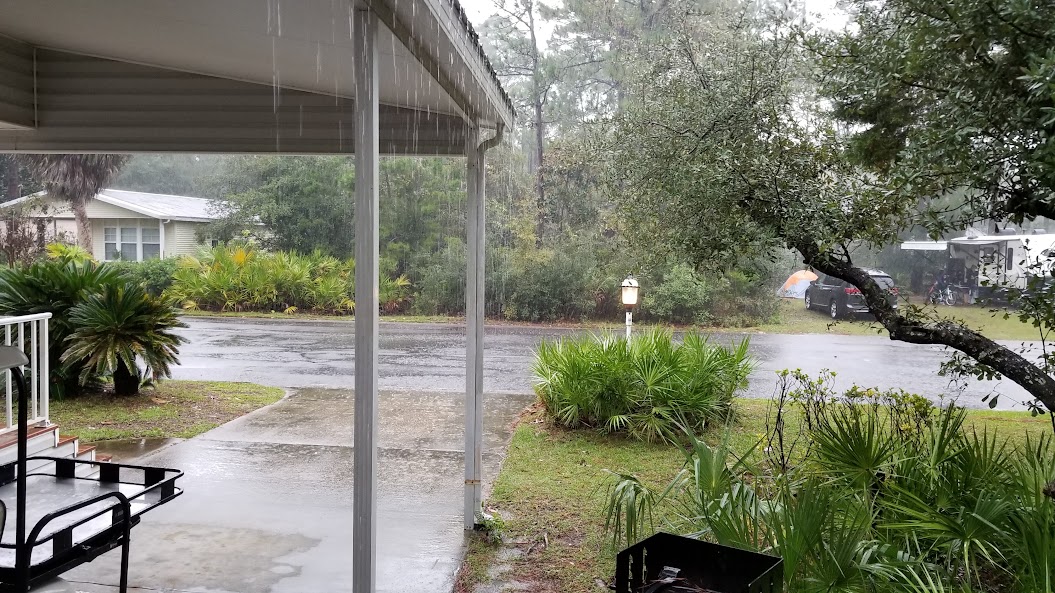 Despite all of that we thoroughly enjoyed the experience, not so much the work itself and the fact that it reduced our costs substantially, but it was a very satisfying feeling knowing that we were contributing to the operation of one of the more popular Florida State Parks. What we enjoyed the most, however, was the camaraderie we shared with our coworkers and the staff. And how nice it was to feel totally appreciated by the staff – they were constantly complimenting and thanking all of the volunteers for everything we did! 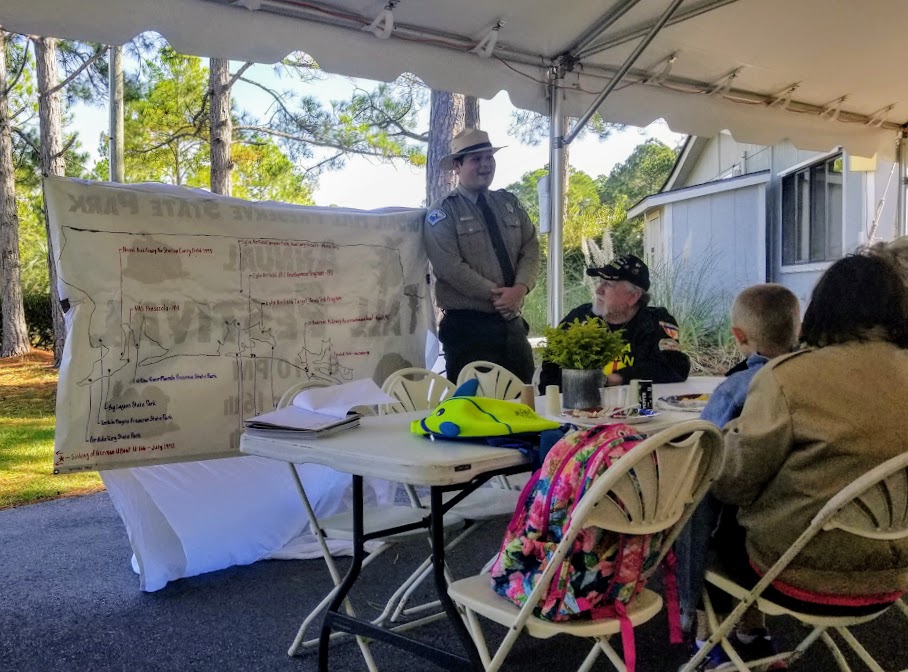 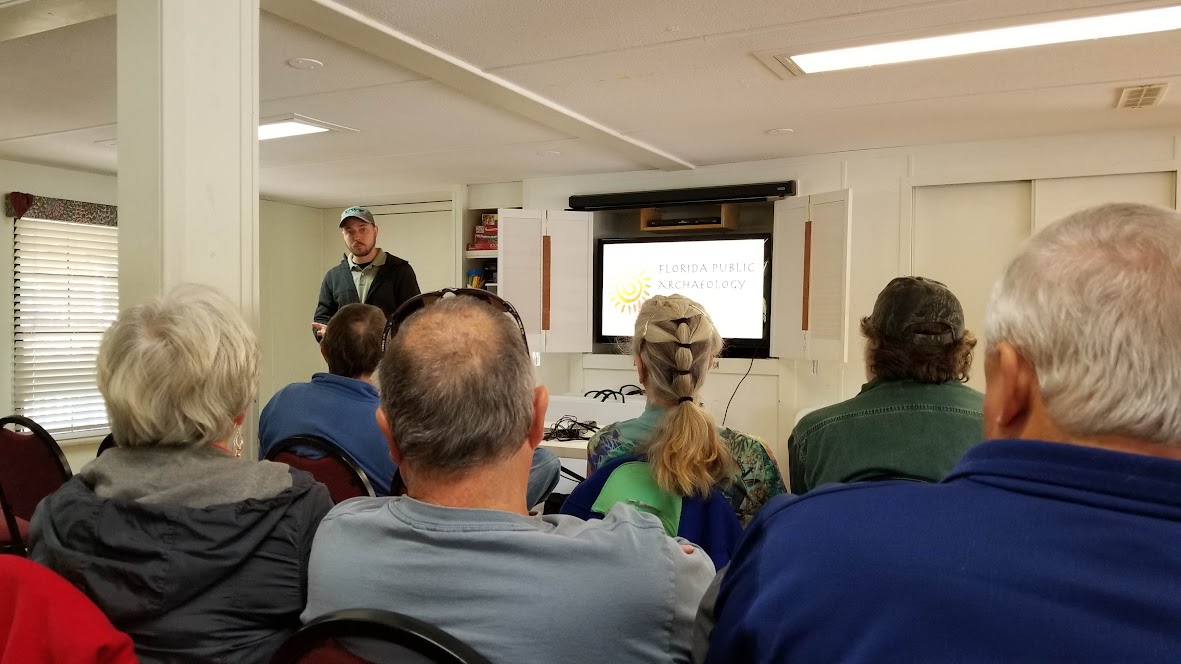 Being on the road during the holidays is always tough, we miss being with family. But this year instead of spending Thanksgiving by ourselves, we enjoyed our new family of volunteers and staff members while dining on generous helpings of turkey and ham (both provided by the park) and a myriad of side dishes and delicious desserts provided by the volunteers. Good food and a good time! 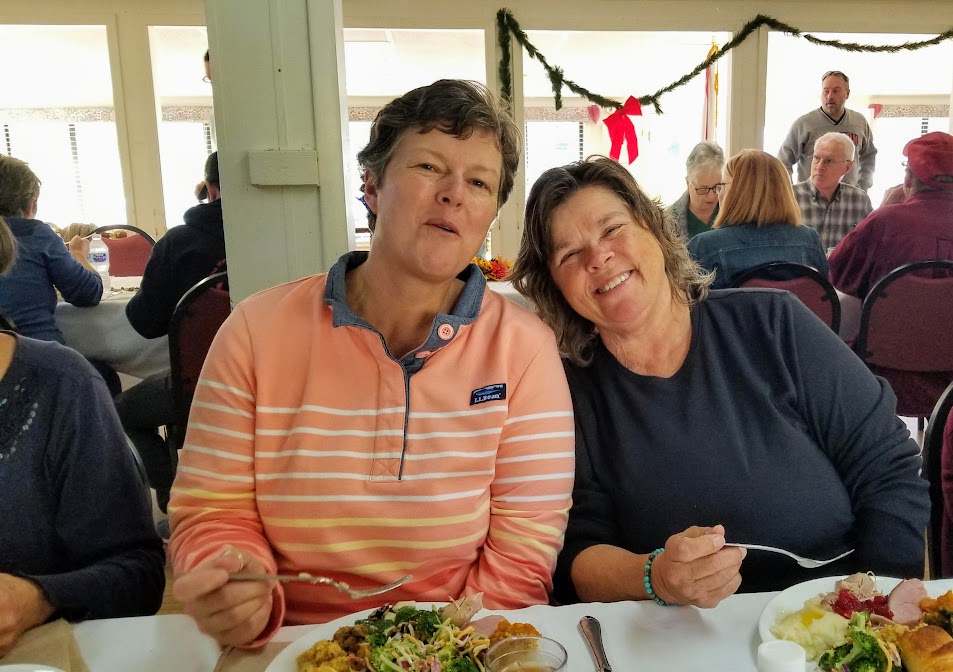 How I felt after our exit interview on Thursday, November 29th with Hallie shouldn’t have been a surprise to me but it was. Sad. Not sad to be leaving the work behind but sad to be saying goodbye to the staff members and the new friends we had made. But the good news is that we signed up for another stint next year (month of October we’ll be doing cabin support again; the month of November, we’ll be working in the Ranger Station). Since some of the volunteers will be returning again next year, we know we’ll be seeing a few of them again.

Actually we weren’t really leaving Topsail on December 1st. Yes, we were done with our jobs, but we had reserved a site for an additional week so we would not only have a chance to hang out for a bit but we would have an opportunity to meet up with our friends, Betsy and Nancy who were arriving on the 1st.

Originally our plan was to vacate our volunteer site #C2 and move to our reserved site (#91) on the 1st but because of nasty weather in the forecast, we were able to move on the 30th well ahead of the storm. 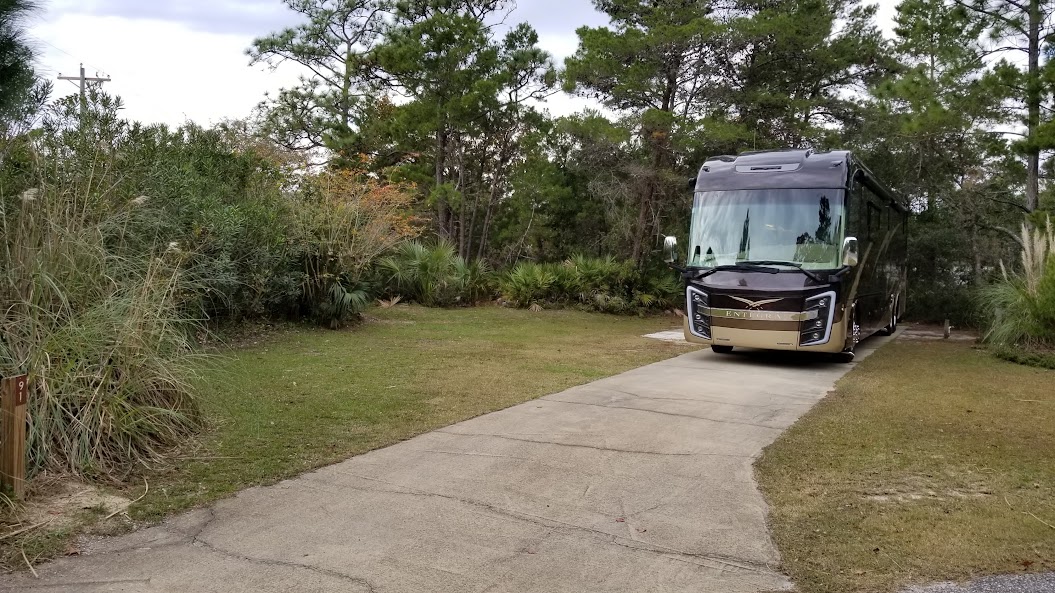 On Saturday night, Dec 1st, friends Debbie and Pat hosted a dinner in honor of Betsy and Nancy’s arrival, inviting us and another work camping couple, Steve and Dara. Never had pozole (Mexican pork & hominy stew) before. Before that night, yours truly didn’t even know what hominy was! Now I do – according to this article, it is a “food made from kernels of corn. The kernels are soaked in an alkali solution of either lime (the mineral, not the fruit) or lye, which is a process called nixtamalization. The corrosive nature of the solution removes the hull and germ of the corn and causes the grain itself to puff up to about twice its normal size.” Glad we had a chance to try something new – it was very tasty!  Thanks Debbie and Pat for your hospitality, the delicious meal and a really fun evening!

Besides working and socializing, what else did we do during our stay? Not a lot. From a sightseeing perspective, we’ve been there, done that, having been to the area a number of times since we’ve been RV’ing. Instead our days off were filled with running the usual (not very interesting) errands, biking around the park, walking on the beach and just hanging out. A little different scenario for Rob especially once Betsy and Nancy arrived when he donned his Mr. Fixit hat.

Before arriving at Topsail, Betsy and Nancy had had a few issues with their coach so Rob quickly volunteered to troubleshoot and successfully resolved those issues for them. He also ran some new wiring for Pat and Debbie so they could install some LED lights inside their coach.

As always, we enjoyed some of the restaurants in the area, a few we had been to before and a few new ones. For breakfast we ate several times at the Donut Hole which is directly adjacent to the park. We have written about this restaurant in a previous post, making the comment that we thought it was obnoxiously expensive (seriously, $13.50 for corned beef hash?), had pretty basic average food (at least for breakfast) and was very noisy. However, when we found out that one of the perks of being a park volunteer was a 50% discount there that changed our tune, bringing the cost for breakfast closer to what we are used to back in RI and we visited several times. Note that we had to be wearing our state park uniforms to get the discount.

For other breakfasts we visited Another Broken Egg in Sandestin, two different Crackings locations (both used to be Another Broken Egg restaurants), Don Pedros Mexican Restaurant and Mary’s Kitchen in Destin. While Don Pedro’s has a limited breakfast menu it wins our pick for best breakfast near Topsail (not counting when the 50% discount for volunteers at the Donut Hole is available), prices are not too bad and the food is more flavorful than the Donut Hole. Mary’s Kitchen is good as well but a bit more of a drive. 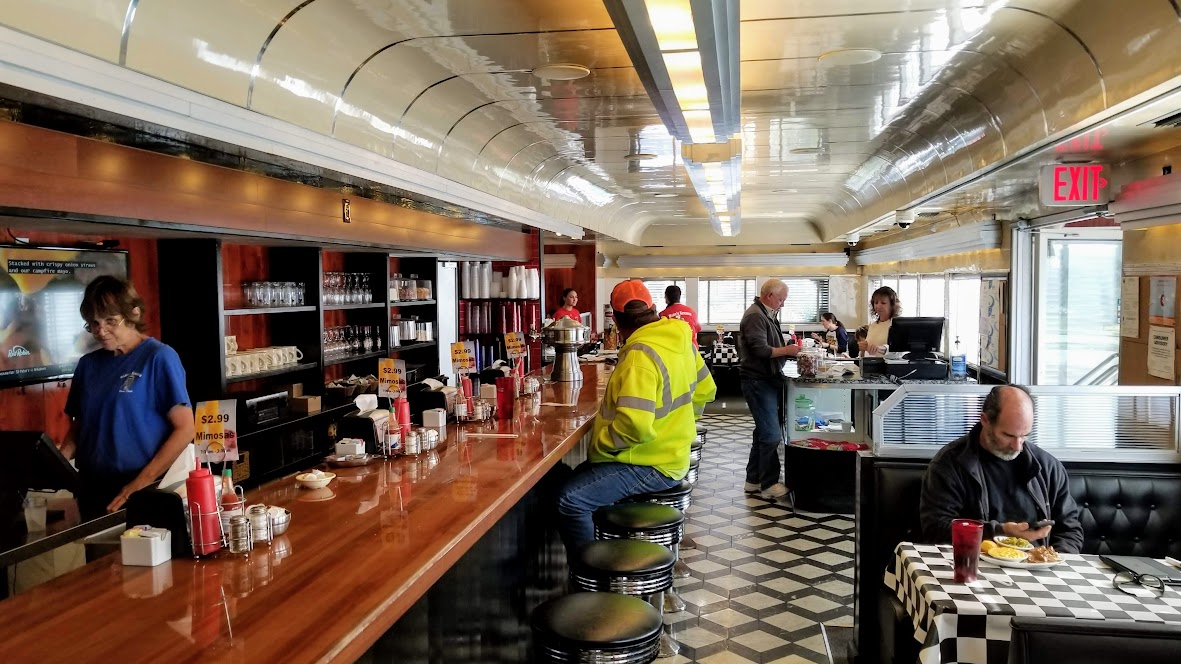 For lunch we stopped at PoFolks Restaurant in Niceville where we had an order of Fried Green Tomatoes followed by Fried Chicken for me and Chicken ‘N Dumplings for Rob. Both were good. 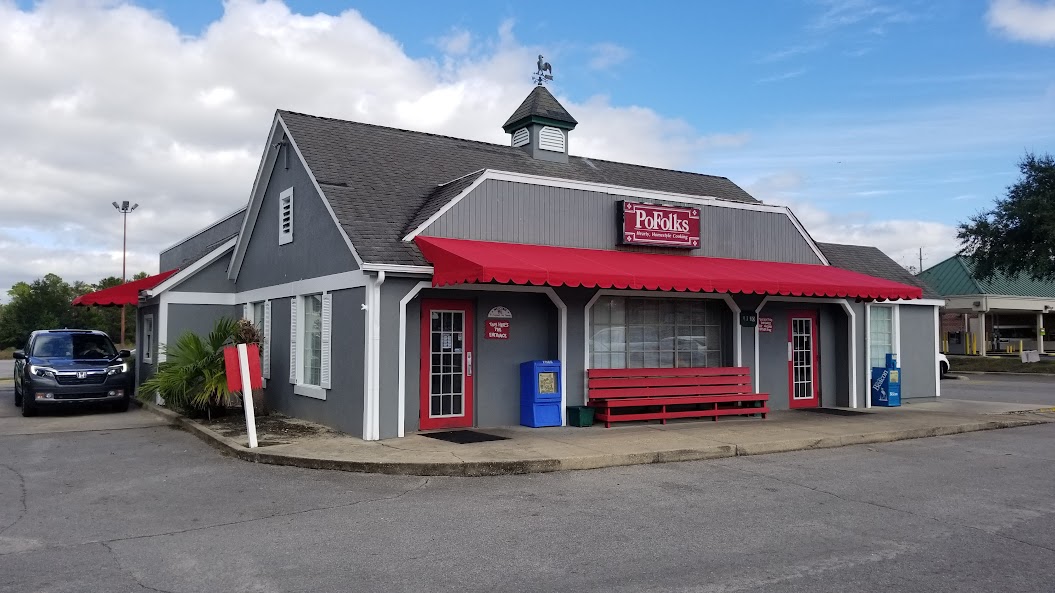 At The Perfect Pig Grill and Fish House, located on 30A at Gulf Place (we had visited the one in Seaside several years ago), we had a really scrumptious lunch. 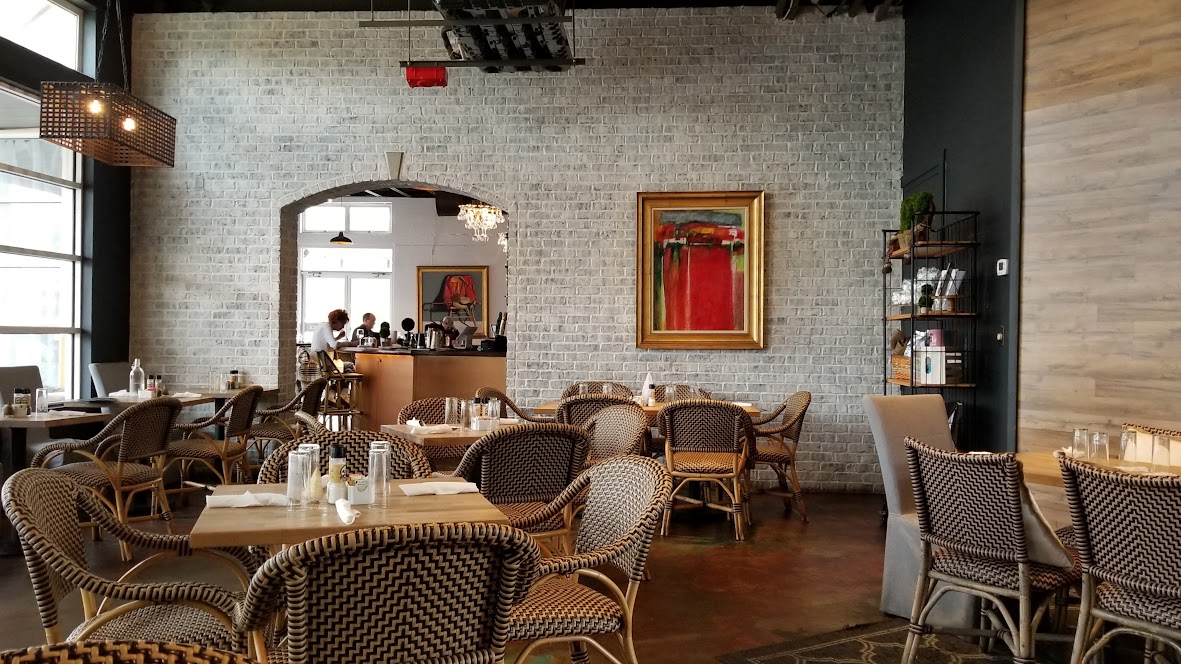 Rob had The Perfect Brisket sandwich ($13.50) which was USDA Prime beef, hickory smoked, aged and cured for fifty-two days, piled high on a grilled, butter bun and I had their Parmesan crusted grilled cheese with tomatoes, mozzarella and pesto ($11) with bacon ($3 extra). Both were served with Baked Potato Salad. Enjoyed leftovers the next day! The brisket sandwich was super tender and tasty but the Parmesan grilled cheese wins this contest! 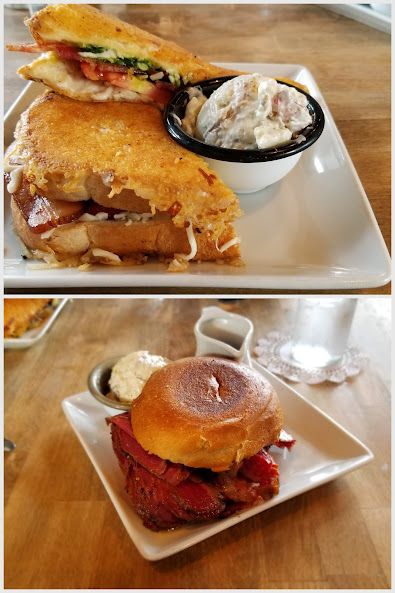 And of course, we couldn’t leave Santa Rosa Beach without having lunch at Stinky’s Fish Camp, one of our favorite restaurants. Tough decision but I had a craving for fried oysters so it was the Fried Oyster Basket ($15.95) for me served with ten delicious lightly battered fried oysters, sidewinder fries, 2 crawfish hush puppies, smoked tomato tartar sauce and tropical fruit slaw. Rob had his favorite – the Crawfish Pie appetizer ($11.95). Once again Stinky’s did not disappoint! 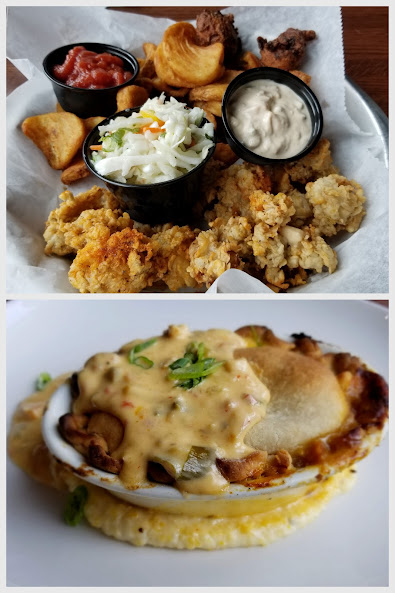 On our last afternoon before our departure we walked down to the beach to watch what turned out to be an absolutely breathtaking sunset. 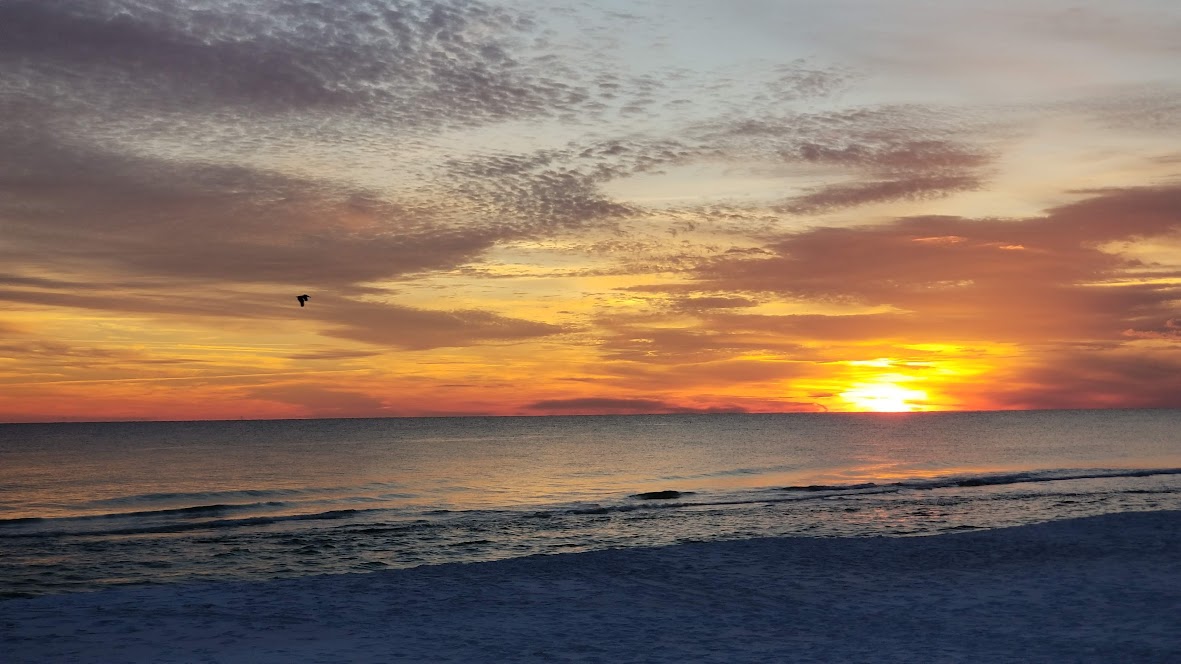 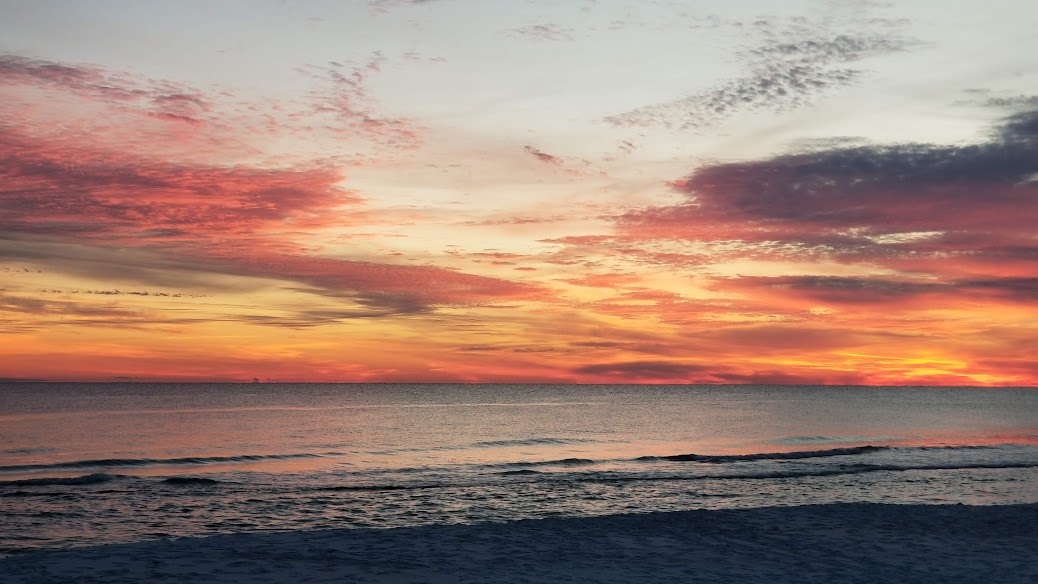 That evening we, along with Pat, Debbie and Betsy, enjoyed a fantastic farewell meal prepared by gourmet chef, Nancy. Red wine marinated short ribs served over grits and a brussel sprout salad. OMG, it was absolutely delicious! 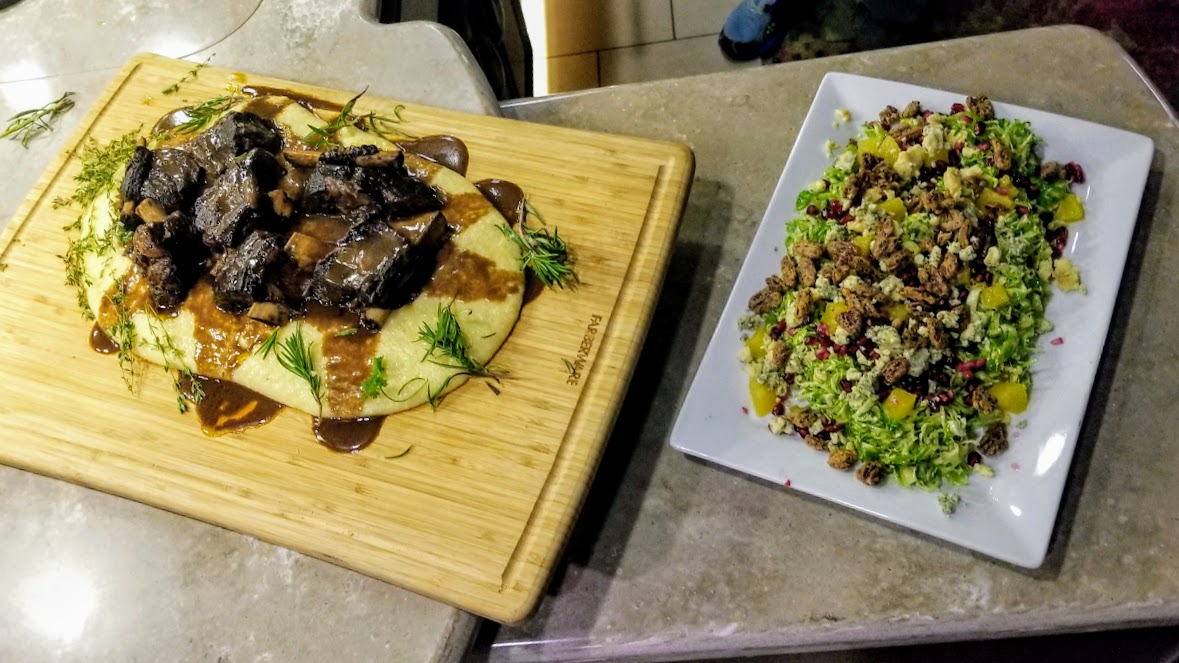 The next morning it was time to reluctantly bid farewell to Topsail. Where to next? Stay tuned…