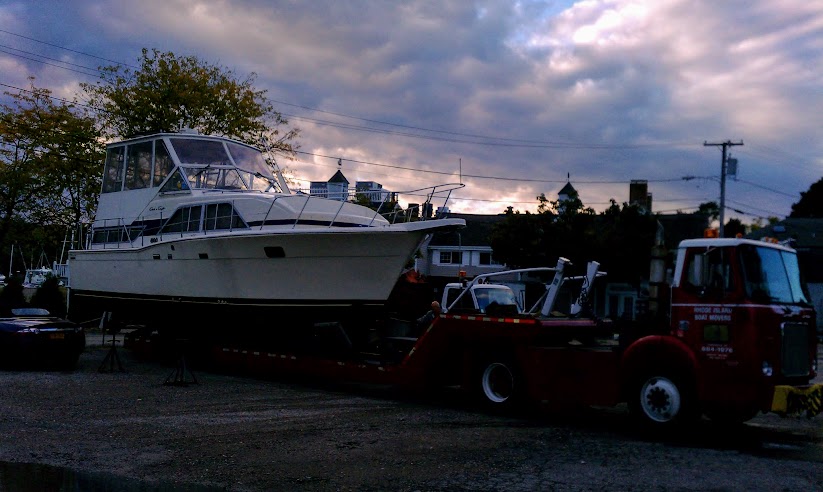 Well, today we checked another task off our list – Quantum Leap has moved from the water to the land where she will spend the long, cold (hopefully not too snowy) New England winter.

It’s been a very long time since we’ve had to set our alarms for 5:00 a.m. and leave the house while it was still dark. We got the lucky spot of first on the haul list and wanted to be at EGYC in time to do a few last minute things before we were hauled.  Do I hear words of sympathy about our early wake up call from the working folks in our audience? Most likely not!

Monday night brought torrential rains as a cold front moved into New England but luckily it had stopped by this morning although it was very overcast.  Temps were in the 50’s but with the clouds and a strong wind, it felt chillier.

In all the years that we have owned a boat, both sail and power, we would typically wait until November to get hauled (last out and first in). You can imagine the cold (and even snow) we used to endure being hauled that late in the season.   It’s only been the last two years (since we have had the motor home) that we have moved our haul date to mid-October. It’s possible our aging bodies and reduced tolerance for cold weather might have something to do with it too. The date you choose for your fall haul out loosely determines your launch date in the spring – the last boat out is put in the front of the yard so it will be one of the first boats in. So a November haul date usually meant a late March launch (BRRR), an October haul date means a late May launch (not bad at all).

hen we arrived at the yacht club, the first order of business was to move the boarding steps from the dock to the swim platform.  You can see the steps in the photo on the left.  If we left the steps on the dock, there is a risk of a strong winter storm or ice destroying our dock and potentially losing our steps.  Not a big deal but we built them ourselves and they have held up well, plus it is not that much extra work to keep the steps on our boat over the winter.

Shortly after we were done with the steps and getting the lines ready, the guys from the

yacht club showed up, ready to escort her with the work boat to the boat ramp just a short distance away. We had already pickled the engines so we did not want to ruin that process by running them to move the boat – besides, the tow service is part of the hauling package.

While we were waiting I noticed a stowaway on our deck.  Not sure

how or why he got there but he got to enjoy a short boat ride. Guess he’s lucky that seagulls don’t like insects! Once the boat arrived at the boat ramp, one of the guys moved him to a grassy area where hopefully he’ll be safe.

Rob and I quickly walked over to the boat ramp so we could watch the operation.  Despite the fact that we have seen this countless times (and maybe you have too!), it is still somewhat fascinating and a little nerve wracking watching your boat being balanced on a trailer and driven down the road! But we’re reassured by the fact that the RI Boat Movers who have been doing this for the club for many years haven’t dropped a boat yet (well actually one, but that was due to equipment failure)! For those inquiring minds, the semi trailer rig can handle boats up to 45′ and 40,000 pounds.

Once the boat is on the truck and driven up the ramp, it is brought over to a special area where it is power washed to remove the slime and growth from the bottom. The running gear (props, shafts, etc.) are usually encrusted with barnacles but we had most of those removed by a diver before we hauled.

The RI DEM (Dept of Environmental Management) implemented regulations several years ago requiring all residue generated from preparing or cleaning boat bottoms ashore be collected and disposed of “properly”.  So to comply, EGYC has installed a special concrete power washing collection pad

with recirculated and filtered water to reduce or eliminate toxins from the boat (such as bottom paint) leaching back into the bay or surrounding ground.  Even before the power wash, the bottom itself was amazingly clean except for 5 barnacles – that’s pretty impressive considering the boat hardly moved and we didn’t even paint this year!

Since, as mentioned, we had a diver clean the running gear last Friday, most of that was clean too. You might be thinking that the cleaning by the diver seems to be in violation of the DEM rules, eh? Well the DEM rules don’t apply to boats still in the water – go figure!

It takes about 15 minutes for each boat to get power washed.  Once done, the boat is driven down the street and into one of 3 lots

(parking lots in the summer) where the boats are stored for the winter.

Once Quantum Leap was set up in her usual spot across the street from the former 20 Water Street restaurant, now called Blu,

we went out for a 99 cent breakfast at the Old Theater Diner in Coventry, about 10 minutes away. Nothing like a nice hot cup of coffee to chase the chill away!  By the time we left for breakfast though,

the clouds had disappeared and it had turned into a bright sunny day. Not much warmer but at least the sun helped.

Once back at the boat, Rob put away the fenders and the lines, moved the helm seat and

several other items down below.  Then it was time to take down the enclosure.  Each panel has to be removed, then handed to me down below where I laid it carefully on the bed.  A sheet is put in between each panel to ensure that the “windows” don’t get scratched.  We have one panel that has to be repaired as the stitching on the zipper has disintegrated due to its constantly being in the sun.

Finally around noon time, we were done and it was time to head home but only after a few stops at Home Depot and Lowe’s to pick up a few more supplies for our never ending bathroom project.

So good night, Quantum Leap, enjoy your long winter’s nap – we’ll see you in the Spring! We promise next summer we’ll give you a lot more attention!

If you really don’t have a life you are welcome to watch the hauling process video we took:

PS Just as I was finishing up this post, the house shook very noticeably and very uncharacteristically – turns out there was a 4.6 magnitude earthquake with an epicenter west of Portland, ME. Yikes!