Hoping to see the azaleas and rhodies in bloom, on our first full day in the area (June 20th) we headed over to Asticou Gardens. Located in

Styled after a Japanese stroll garden, a circular path meanders through a series of garden rooms filled with native plants, azaleas, and rhododendrons. Other landscape features include streams and a pond as well as ancient stone lanterns and stone benches which are tucked in among the plantings. Our favorite feature is the “sand garden” which uses rocks and raked sand, suggesting islands and flowing water.

Located at the intersection of Route 3 and 198, the garden is open to the public and is free although donations are appreciated. Parking is limited. Another garden created by Mr.

Savage is located a short drive from Asticou. Thuya Gardens is a “blend of semi-formal English border beds and indigenous eastern Maine woodlands situated on a granite hillside overlooking Northeast Harbor.” We’ve been there in the past but didn’t visit there this year. 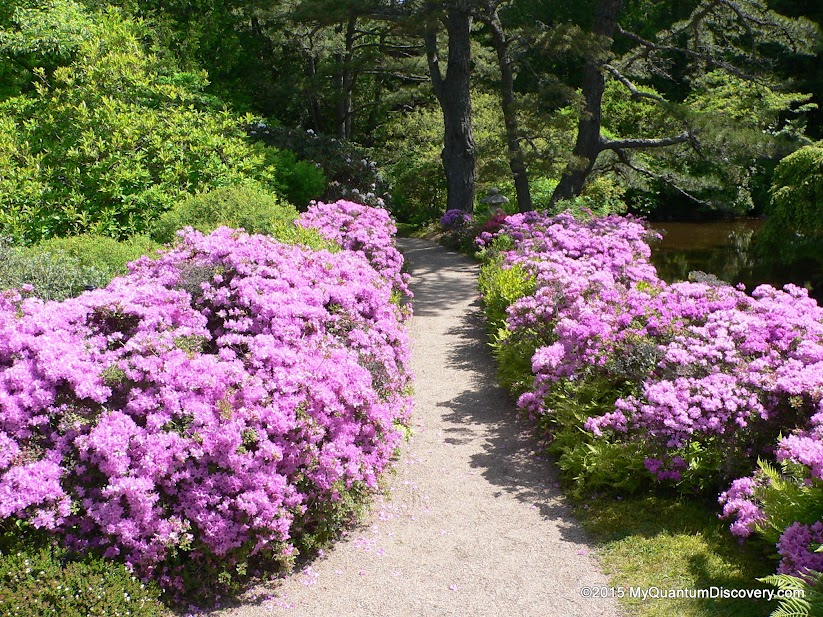 Although it was still quite beautiful and serene, most of the azaleas were past their peak, although a few bushes had some color, perhaps their blooms suffered from a recent rainfall, so that was a little disappointing. And it was too early for the irises which bloom along the edges of the pond and stream. Oh, well, we’ve seen it in its glory on previous trips, maybe next time we’ll catch it again at it’s peak!

Somes Sound Fjard
We drove along Sargeant Drive along Somes Sound. Now before you get in a dander,

thinking that I misspelled “fjord” as my hubby quickly pointed out when he saw it, I didn’t. Formed from glacial activity, Somes Sound almost splits Mt. Desert Island in two and is often described as the “only fjord on the East Coast”. But because it lacks the extreme vertical topography and the oxygen deprived sediments as with Norwegian fjords, Somes Sound is more properly called a “fjard“. Its deepest point is approximately 175 feet.

Quieter and less busy than Acadia and the rest of Mount Desert Island, we always like to escape the hustle and bustle and take a ride along Sargeant Drive. The drive meanders past beautiful homes most of which are hidden from view and along the edge of the fjard.

Ah, Acadia (note there’s NO “r” in the name), with its rugged coast, rocky shoreline, mountains, abundant wildlife, granite cliffs and boulders and crashing waves. A place of relaxation or a place of adventure. What’s not to love about this park? For us, even after visiting a number of National Parks, this is probably one of our favorites. Combining mountains, seashore, glacial lakes and semi-alpine terrain there’s a lot to like here. It always surprises us that so many native New Englanders we’ve met have never been here!

Comprised of approximately 46,856 acres, half of the park is on Mt. Desert Island and the rest of it is on Schoodic Peninsula located on the mainland to the northeast and Isle au Haut to the southwest (only accessible by boat). Mt. Desert Island, by the way, is the third largest island on the East Coast (Long Island and Martha’s Vineyard are larger) and it has 24 mountain peaks. Although smaller than any other national park in the country, it ranks among the top 10 in visitors – an estimated 2.5 million people visit the park each year.

You would think that three weeks in the area would be enough to explore this wonderful park but it wasn’t. Darn! I guess the good news though is that it will give us an excuse (not that we need one) to return again in the very near future.

…..to revisit Schoodic Peninsula, an hour’s drive, but we never made it.

…..to explore the 45 miles of broken stone Carriage Roads and see each of the 17 unique stone bridges crafted by masons from native rock, all financed and directed by John D. Rockefeller Jr. between 1913 and 1940. We didn’t see all of them,  just one bridge as we walked a 3 mile stretch of one of the carriage roads. So that leaves 16 more bridges and 42 more miles of roads left for us to explore.

…..to hike around Jordan Pond but we didn’t do that either after hearing how crowded it was this time of year. Jordan Pond is an an oligotrophic tarn (two new words I just learned about) which means that it is a mountain lake that offers little to support life and was formed by the Wisconsin Ice Sheet during the last glacial period. We’ve been to the Jordan Pond House, which is famous for their popovers for lunch but have never walked the trail around the pond.

…..to catch sunrise or sunset on the 1,530 foot high summit of Cadillac Mountain, the tallest mountain on Mount Desert Island and the highest point along the North Atlantic seaboard but didn’t. With sunrise between 4:30 a.m. and 5:00 a.m. there was no way. Did you know that from October 7 through March 6 of each year, it is the first place to view a sunrise in the United States?

More interesting is what we did do…..

…..we stopped at the Hull’s Cove Visitor Center, climbing the 52 steps from the parking lot to the Center, where we watched the 15 minute audiovisual program, picked up a map and calendar and viewed the exhibits, which was a great help in re-familiarizing ourselves with the Park. Park Entrance fees had increased since we were last here – the fee now is $25 for a private car which

is valid for 7 days. However, with our National Parks Senior Pass ($10 lifetime) and my ID, the park was free. At the time, we didn’t realize that we needed a “holder” for our pass so it could be displayed on our rear view mirror – we had to pick one up later at one of the gates.

…..we drove up to the summit of Cadillac Mountain twice, once by ourselves and once with Rob’s aunt & uncle who were visiting us for 5 days. Magnificent views of Bar Harbor, the Porcupine Islands, Bar Island, and in the distance, Schoodic Peninsula on the mainland to the northeast. Eagle Lake and Western Bay could be seen on the northwestern side of the summit.

…..on a few occasions we drove the 27 mile often one way scenic park loop road, stopping at the many scenic vistas. Pretty busy especially at Sand Beach, the

park’s only sand beach on the ocean. Surprised that it is always so busy here. From what I’ve read, it’s not for the faint of heart as the ocean temperature rarely exceeds 55 degrees in the summer.

Continuing on the loop, we stopped at Thunder Hole. Here tides sweep into a narrow granite channel so air becomes trapped, then escapes with a thunderous roar. Unfortunately it was at low

tide so it was pretty silent that day but that didn’t matter it was still beautiful.

…..we walked a few of miles on the trail along the ocean

to the 110 foot Otter Cliff, one of the highest Atlantic coastal headlands north of Rio de Janeiro. Such a popular place for face climbing and rappelling that the park maintains fixed anchors on top that climbers must use instead of trees. Nope, won’t catch me doing that!

Did you know that Martin Scorsese filmed the cliff climbing scenes

Relatively easy walk with lots of places to leave the trail to sit on the rocks and enjoy the totally breathtaking and exhilarating views!

Near Otter Cliff, off in the distance we could see a bell buoy. We didn’t realize at the time that it marks the “Spindle” which has considerable

historic significance. In 1604, sixteen years before the Pilgrims landed at Plymouth Rock, Samuel de Champlain while sailing around Mt. Desert Island at high tide, noticed smoke from a Native American encampment near Otter

Point. They did not see the dangerous rock formation in time to avoid it, suffering enough damage to their hull that they had to spend the winter in Otter Cove for repairs. That’s why so many places in Acadia have French names.

….we walked one of the carriage roads. At the suggestion of Betsy and Nancy, took the van for a ride on Duck Brook Road, parked it near the end and walked the Witch Hole Pond Loop which was about 3-1/2 miles. To get to the carriage road from Duck Brook

Road we crossed over one of the famous bridges.

From what I’ve read this is one of the finest and most photographed bridges in Acadia. According to National Parks Traveler, “the Duck Brook Bridge is a spectacular, three-arch structure over Duck Brook. Completed in 1929, there is a central 30-foot span flanked by smaller 20 foot spans, each of

which has rough-dressed uneven radiating voussoirs with prominent keystones. The gravel-surfaced deck is 200 feet in length and flares at either end. The railing has dressed ashlar copings and there are pairs of

rectangular openings piercing the railing above the lesser arches and three pairs above the main arch. Above the spandrels of the arches, corbelled and semi-circular balconies extend off from the deck to allow the traveler to enjoy the scenery from excellent vantage points.” Pretty cool!

From the bridge, we could hear the gurgling sounds of the brook as it flowed over rocks underneath the bridge. Rob managed to walk down the embankment to get a better view of the bridge.

When designing the roads, Rockefeller’s vision was to have an integrated system of carriage roads that blended harmoniously with the landscape. He certainly accomplished that.  By using large blocks of granite which were cut roughly and spaced irregularly to line the roads and serve as guardrails he achieved a rustic appearance. These blocks called “coping stones” are often referred to as “Rockefeller’s teeth”.

Luckily not much traffic just an occasional solitary bicyclist or a family.

peaceful and serene against the backdrop of the mountains. A beaver dam caught our attention but no sign of the critters.

Further along, we could see something in the water but it was so still we thought at first it

was just a stick but it turned out to be a single solitary loon floating peacefully in the water. Several other smaller ponds were along

the route. One was rather spooky looking, full of the trunks of dead trees.

Finally we were back to our original starting place. What a lovely walk! It made me wishing we had more time to explore more of the carriage roads. Oh, well, next time…..