On the morning of May 10th, we left Fort Chiswell RV Park, headed for our next destination – Endless Caverns RV Resort in New Market, VA, enroute back to RI where we will hopefully have an active summer of boating. It would take us about 3 hours to reach our destination.

It was a day of off and on showers along with very cloudy skies as we made the 3 hour drive along I-81. Despite the gloomy skies, lots of farms, cows, distant mountains and greenery made for a very pleasant and scenic drive. 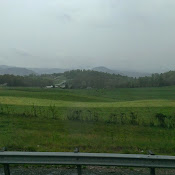 When we left Fort Chiswell, we weren’t totally sure where we would be staying the next night – Rob had narrowed it down to a couple of different places, Endless Caverns being one of the choices. When I called in the late morning to see if they had availability, the call was answered by an auto attendant system and after 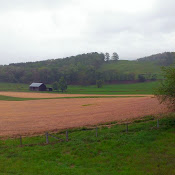 selecting the option to make a reservation, I was placed on hold and told that I was caller number 2, okay that didn’t seem too bad.

HA! I waited and waited and waited, probably at least 10 minutes (I’m usually not that patient) with the stupid voice still telling me I was caller #2. Finally exasperated I hung up. I tried again several minutes later – guess what I was caller #2 again. I waited again (not as long), then hung up again. On my third try (this time I was caller #4), I still didn’t get an answer but at least this time it gave me the option to leave a message which I did. Just as we were thinking about going to our second choice, I received a call back – yes, they did have availability.

After driving through the cute town of New Market, we took a right onto Endless Caverns 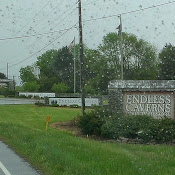 Road. Straight ahead on the side of the mountain in big white letters was “Endless Caverns” – guess this is similar to the 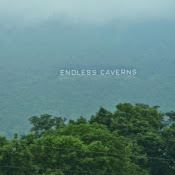 Hollywood sign in CA although not nearly as big. We later found out the sign had just finished being restored and was going to be lighted for the first time that night.

After parking in the rather steeply sloped lot, we checked in at the registration office/gift shop where we were assigned site, E-33. During our conversation I commented on how difficult it had been to reach them on the phone – apparently they were having temporary problems with their phone system or service. Lovely building with a huge stone fireplace and all sorts of items for sale (mostly souvenir items, not camping supplies). You can also buy

tickets here to take a tour of the caverns.

Since it was considered off season (June 21st to September 3rd is peak season), the regular rate for the night for a full hook up pull thru was $34.99 (back in site was $29.99). However, the RV Park is part of Passport America so for one night the rate is only $20. If you stay in the campground, you also get a reduced rate of $13 for the cavern tour instead of the regular $18. We were escorted to our site by the campground staff. 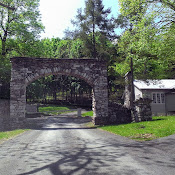 Word of warning – when coming out of the parking lot or leaving the campground area, take the road through the parking lot – DO NOT under any circumstances go under the stone arch. Beware – there are no signs indicating the height of the arch. When we asked the woman at the desk how high it was, her reply was “not high enough”, then she proceeded to tell us about someone who did go under the bridge and managed to shave off the top of their 5th wheel! Apparently it is a historical artifact so the current owners either can’t tear it down or don’t want to. It is actually easier to enter exit by circumventing the arch but it needs some signage to eliminate any confusion for new visitors. 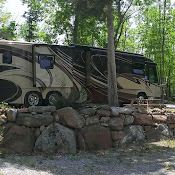 The 265 acre Endless Caverns RV Resort has 148 spacious full  hookup RV sites, a  zero entry swimming pool. a fully stocked catch and release pond, a recreation hall, a game room and several nature trails. Built on the side of a mountain, the majority of the sites are terraced, making it nice from a space and privacy 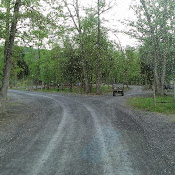 perspective but I have to say it was a pretty steep climb up to our campsite.

They [were] a NASCAR RV Resort (not totally sure what that means) although I did find on the above website that “Nascar RV Resorts feature live satellite coverage of NASCAR race events on oversized jumbo screens, a tailgating atmosphere and family-friendly activities.” 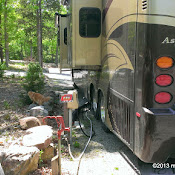 All of the number signs at the sites were little Nascar race flags! Update: as of 2/2015 they no longer seem to have any affiliation with NASCAR.

Our site was pretty spacious with lots of privacy, not that it mattered because the campground was fairly empty so we didn’t have anyone close by, just two motor homes up the hill and across from us as well as a smattering of other rigs scattered throughout the rest of the sites.

The sites here are gravel and our particular site was unlevel enough that the right front wheel would have had to be off the ground to get the coach level. We didn’t have any appropriate blocks so Rob got it as level as he could and we just lived with the coach being slightly slanted. The next day he did mention how unlevel it was to the manager who said that they hadn’t been able to do their usual spring maintenance yet due to the weather. Not sure if that was true or just an excuse, but a slight amount of grading would have resolved the issue. Most of the other sites seemed like they were closer to level.

The only other comment was that some of the landscaping seemed a little untidy and in need of weed whacking but perhaps this was due to the weather as well and obviously didn’t affect our stay there.

Despite those two minor dings, all in all this is a very nice campground and we would definitely return. In fact, our initial plan was to stay here for one night but after checking in, we decided to stay a second night. Stay tuned for what we did while there!