Today was our first full day back at the ranch in Norton and one of the first things on the list is to get the outside of the house looking presentable. One of the things that makes the house look shabby are the weeds that sprout up out of our gravel driveway. 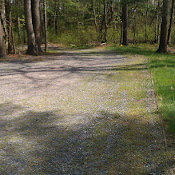 This has been an issue since day one but over the years the problem has become worse. It used to be a few spritzes of a systemic vegetation killer (like RoundUp) would do the job. In the past few years though the density and propensity has increased and that has become an expensive waste of time. I really don’t want to use an all-out vegetation killer for environmental reasons, plus those poisons may affect adjacent trees and lawn areas.

Our driveway is about 300′ long and the surface is composed of a material known in these parts as “3/4 process”. It’s a mixture of 3/4″ stone (usually bluestone), stone dust and someone told me Portland cement. It compacts incredibly well and never gets “muddy” even in the heaviest rains.

On the other hand trying to dig into it is like trying to crack concrete and it just can’t be done with a shovel. A pickaxe or something like that is required to break it up. it’s amazing that anything will grow in it, but it does. 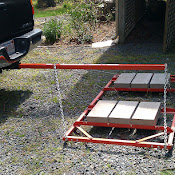 So anyway, last year the weeds had become unmanageably dense, plus years of vehicle traffic had started to form shallow tire ruts and there were some unlevel spots from snowplowing. So after months of procrastination I finally broke down and purchased  a driveway groomer.

This is more a less a six foot wide heavy duty rake that is weighted down with concrete blocks that you drag over the driveway surface. I didn’t expect it to work as well as it did. It cuts into the surface an inch or two and not only removes the majority of weeds but redistributes the top layer which levels out the surface and makes everything look pretty again. 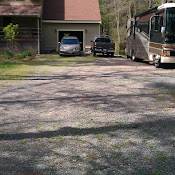 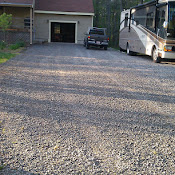 So this was one of the projects for yesterday and only the second time I had used the groomer. Adjacent are some before and after shots. 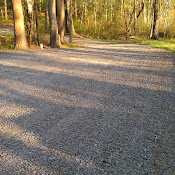 slowly driving back and forth over the driveway  surface. The driveway edges are the hardest part as I can’t see the groomer very well from the truck cab – I kind of need to lean out the door. Much faster and effective than weeding by hand, and as you can see a vast improvement!

Some more after shots: 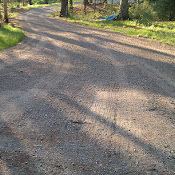 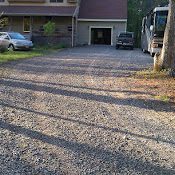 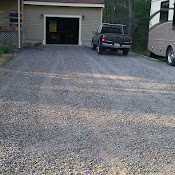 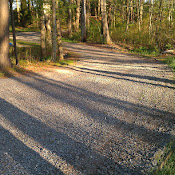 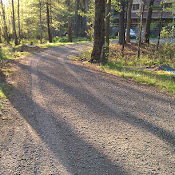