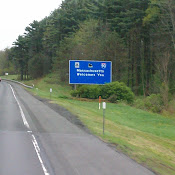 After a quick breakfast in our coach, we left Camp WalMart around 9:00 a.m. for our final leg home.  Since it was only a 3-1/2 hour drive (not including stops), we knew we would be home relatively early.

So we hopped back onto I-90 heading west.  I was a little disappointed because the scenery on I-90 going through the Berkshires in western Massachusetts is 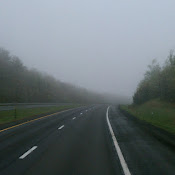 quite pretty but the weather wasn’t cooperating – it was overcast, quite murky and at times drizzling.  But who needs sunshine anyway?  A little bit of fog, drizzle and murkiness can add a certain mystique to the scenery.

At the border of NY and MA, I-90 became the Massachusetts Turnpike which we followed until we exited at I-495 heading south towards Cape Cod.  It has been awhile since Rob and I have been on the 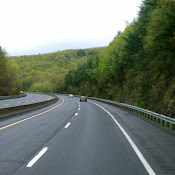 Mass Turnpike – it was a mixed bag in terms of the condition of the road surface.  In some places it was very smooth but in other areas it was sorely in need of improvement.

Finally arriving in Norton we turned into our dirt road around 12:15 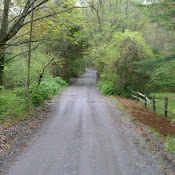 p.m.  When we sell the house, we certainly won’t miss having to maneuver our huge rig down this one lane unimproved rutted road. The town does grade it occasionally, but not recently – I guess we forgot to let them know our arrival date – ha!

It was kind of funny as we were driving down the lane, a car was coming towards us in the opposite direction.  Being a one lane road, even with just two cars, this can create a challenge.  I can only imagine how the driver felt in the other car seeing this huge RV coming at her! Her reaction was to pull as far 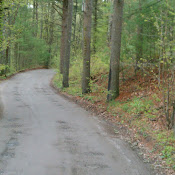 over as she could on the side of the road and stopped.

Did she really think we’d be able to squeeze by her?  No way that was going to happen.  We motioned to her indicating that she should pull into the driveway on the opposite side of the road so we could 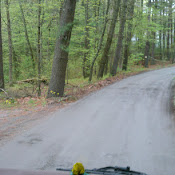 get by which she did.  After jockeying the coach around a few trees at Rob’s favorite curve in the road, we were just about at our driveway.

Long enough anyway for the grass to get long and be in dire need of mowing, for the weeds to overrun the gravel  driveway and for the deer to totally annihilate all of our shrubs. 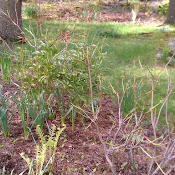 All the leaves on our rhododendron bushes as well as several holly bushes (which they normally don’t touch) were gone.  And most of the hostas that had started to sprout were already chewed down to the dirt!  GRRRR!  Don’t they have enough to eat in the woods??? Rob mentioned something about a shotgun a few times.

As I got out of the coach and looked up at our porch, I noticed that we do have a nest full of baby Eastern Phoebes just like we do every year. 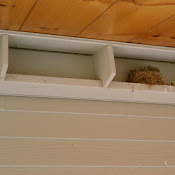 Before the porch ceiling was finished, they used to nest on the joists. When we finished off the ceiling, Rob built a little condo unit for them and they build two or three nests there each year.  I’m not sure how many generations of Phoebes we have had but it must be quite a few.  There must be at least four in the nest and they are pretty big so they are probably about ready to take their first flight.

Update: Well, I guess I was right about that – here it is Sunday morning and I went out to take a picture of them but they were gone!  Guess they didn’t like the fact that us humanoids had arrived back home.

When we walked into the house, we both said at the same time, boy, this place is huge!  At least it seems that way after spending 4 months in less than 400 square feet of space. And we both immediately felt overwhelmed by all the “stuff” that we have to do this summer.  But Chooey, Sparky and Gizmo sure seemed happy to be here.  Within 5 minutes they started running all over the house. 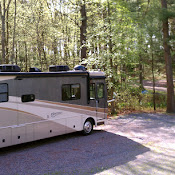 Once Rob unhitched the toad, he jockeyed the coach in the driveway (and on the lawn) to turn it around so it is facing away from the house which will make it easier to unload and to leave for our next trip.

We will need to take it out in the next week or two to get the Norcold fridge recall module repaired again and to fill the diesel tank. We’ll then treat the fuel with the diesel version of Startron to stabilize it for long term storage as do many boaters. Then we’ll plank (vapor barrier) the tires where they touch the ground and install our UV covers over the tires and windows. We’ll also set wood blocks under the chassis jacks before letting down the air suspension – this takes most of the weight off the axles and tires.

Note that the gas version of Startron is also excellent and stabilizes against phase separation of the ethanol – we have used it for several seasons on Quantum Leap and it has done the job keeping our 10% Ethanol gas fresh all year long despite its very short normal shelf life.

Rob installed a 50A hookup on the house for coach electrictricity, but he still needs to set up a dump system for the holding tanks – the house septic system is several feet higher than the driveway so a maceration system will be needed. We figure we’ll be living on the coach in the driveway once the house is on the market.

We spent Saturday afternoon, getting everything turned on in the house (water, water heater, etc.) and then unloading the necessities that we needed immediately.  We have a well and the water was icky brown after sitting dormant all winter, but seems to have cleared up after running it for a while. Sunday will be spent grocery shopping and unpacking more stuff and maybe mowing the lawn.  Welcome back to reality!

We do have to say that it was a wonderful trip and we had a fantastic time! We met some new friends, went to a lot of wonderful attractions and thoroughly enjoyed living in our 39 foot mini-home.  Although it was a lot of work writing the blogs, it was a lot of fun sharing our experiences with everyone.

So this particular segment of our journey has ended but we hope there will be many more as our transition progresses to live-aboard boaters and full-time RV’ers.  We have no plans to stop blogging but it will be less often and obviously our focus will be on our house remodeling projects and the launch of Quantum Leap in a few weeks.  Stay tuned……