Early Monday afternoon, October 10th after our visit to Safe-T-Plus (more on that in a separate post), we headed for our next stop – Camping World Good Sam Campground (review coming) in Anniston, GA about an hour’s drive west of Atlanta on I-20., perfect easy access place for a quick and comfortable stopover. 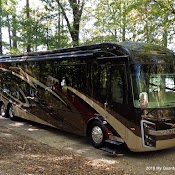 At this point, we were ready for a little downtime so our plans were to hang out for a few days at Whitten Park, an Army Corps of Engineers (COE) Campground (review coming) in Fulton, MS. Not quite as nice or as well maintained as other COE campgrounds we have stayed at but still a lovely campground with some spacious wooded sites. Our particular site (#28) had a view of the lake from our large patio area. 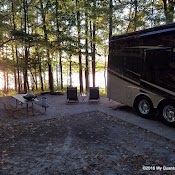 Since rest and relaxation was at the top of our to do list, we spent a lot of time just hanging out, organizing our new home and taking a few walks along the waterfront. 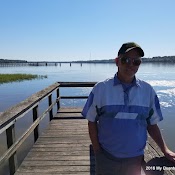 Guess two days of R & R was too much for us because on our third and last day, it was time for an excursion! Started out on the hunt for a decent breakfast place but no luck. Eventually headed for the nearest small city about a 30 minute drive from 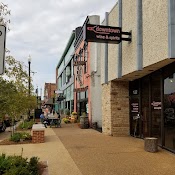 Tupelo. The seventh largest city in the state of Mississippi. Home of the largest Mississippi zoo dedicated to Buffalo. First city to gain electric power under the New Deal in 1934. Headquarters for the Natchez Trace Parkway. Five time winner of the National Civic Leagues All American City award. Birthplace of the King of Rock ‘n Roll. Scene of the annual Elvis music festival. Home to the Tupelo Automobile Museum where yes you can see a Lincoln previously owned by Elvis.

Food was on our mind so first on our agenda was lunch at Kermit’s Outlaw Kitchen, a very popular restaurant featuring farm to table 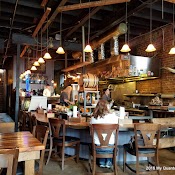 cuisine located in a 140 year old building in Historic Downtown Tupelo. No, it is not named for Kermit the Frog but instead for Kermit’s Bakery which was housed in the same space for many years prior to it being turned into a restaurant. Greeted at the door, we 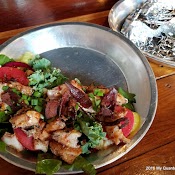 were directed to choose from the list of daily specials, order at the counter, then find a table. Our order would be brought to our table when it was ready. Many times we have walked out of restaurants because we prefer sit down table service but we liked the general vibe of the place, the decor and the online reviews were good so why not! Smart move on our part! The Smoked Grouper Tacos special ($10) looked intriguing to me. No typical taco ingredients found here however, nope, not tomatoes, onions, peppers or guac! 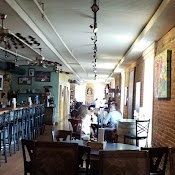 After lunch, we checked out their upstairs dining room and bar. Looks like a really neat hang out place! If you are ever in the area, highly recommend a visit here.

Little did we know when we started out that day that Tupelo’s most well known claim to fame was as the birthplace of the King of Rock ‘n Roll, aka Elvis. Ah, yes! Signs of Elvis were everywhere! Even a 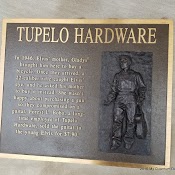 historical marker was on display in front of the old fashioned corner hardware store, Tupelo Hardware. According to the marker, this hardware store was where Gladys Presley bought her 11 year old son his first guitar even though he really wanted a rifle! The story goes that the boy strummed the new guitar for a while, before his 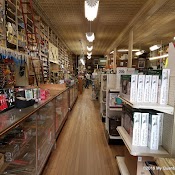 Looking through the window, we could tell that this is what hardware stores were like when I was a kid (so many, many years ago), years before the conglomerate Home Depot and Lowes were born. In need of a dose of nostalgia, we just had to take a look inside. Very cool! An older gentleman behind one of the 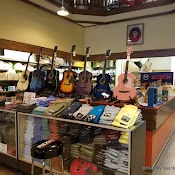 counters asked us if we were on the “Elvis Trail”. Ah, no, didn’t know there was such a thing, an answer which surprised him! Are all Tupelo tourists Elvis fans? Sensing that we weren’t Elvis fans, he told us the history of the store which is a family business, owned and managed by three generations of the Booth family for over 90 years. Wandering around, we were surprised 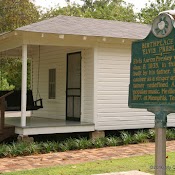 to see that they still sell guitars. Perhaps they’re hoping another potential future Elvis might come in and buy one.

The King of Rock & Roll was born in Tupelo on January 8, 1935 in a house built by his father with $180. Over 50,000 visitors are drawn here each year to visit the famous landmark, now part of the 15 acre Elvis Presley Park. Despite the numerous signs throughout the town attempting to lure us, the $17 per person price tag seemed a little much to us. Perhaps it might have been worth it. 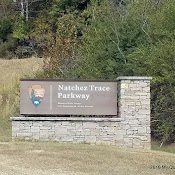 Instead we were lured outside of town by Tupelo’s other claim to fame, the Natchez Trace National Park Service Headquarters and Visitor Center, located at milepost 266. Extending roughly 440 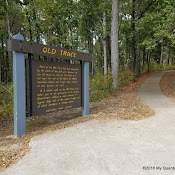 miles from Natchez, Mississippi, to Nashville, Tennessee this historic trail was used by American Indians, “Kaintucks,” settlers, and future presidents. At the Visitor Center, very informative displays and an audio visual presentation outlined the history of the Trace and the surrounding area. At milepost 270, a short distance from the Visitor Center, we stopped to walk a short section of the original 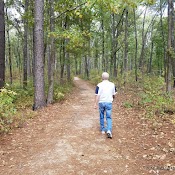 Trace leading to the Unknown Confederate Graves of 13 Soldiers, a reminder of the human cost of the deadliest war in American history. No one knows the real story or the names of these men or how they died. Did they die from their wounds? Or was it illness? Did they die of hunger? Was there a hospital here? No one will ever know the 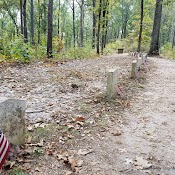 answers to these questions or who these men were. Sad. The original markers for the graves are gone, probably destroyed by time, the elements or perhaps even vandalism. Even sadder though was to learn that new marble stones were placed on the graves in 1940 per order of Senator Bilbo but those were stolen, eventually being replaced with the current markers by the National Park Service. How maddening that people would desecrate a historical landmark. How can they have such little respect for our history and the people who fought for our freedom?

Back in 2012 when we visited Nashville for the first time, we had made a short excursion along the Trace and had always wanted to return to drive the entire trail. Unfortunately traveling the entire trace wasn’t in the cards for us this year. There’s always next year!

Because we only had a few hours to spend in Tupelo, we only had a taste of what the city had to offer. But it was still a fun and somewhat interesting excursion. Returning back to the campground, we prepared for our departure the next morning. Remember the song “Walking in Memphis” by Marc Cohn? Can you guess our next destination?