From nature to asphalt, that was the difficult transition we would have to make after we left beautiful Shenandoah River State Park. Our days of sightseeing had come to an end as it was time for us to make tracks back to RI. After all, boating season was quickly approaching! 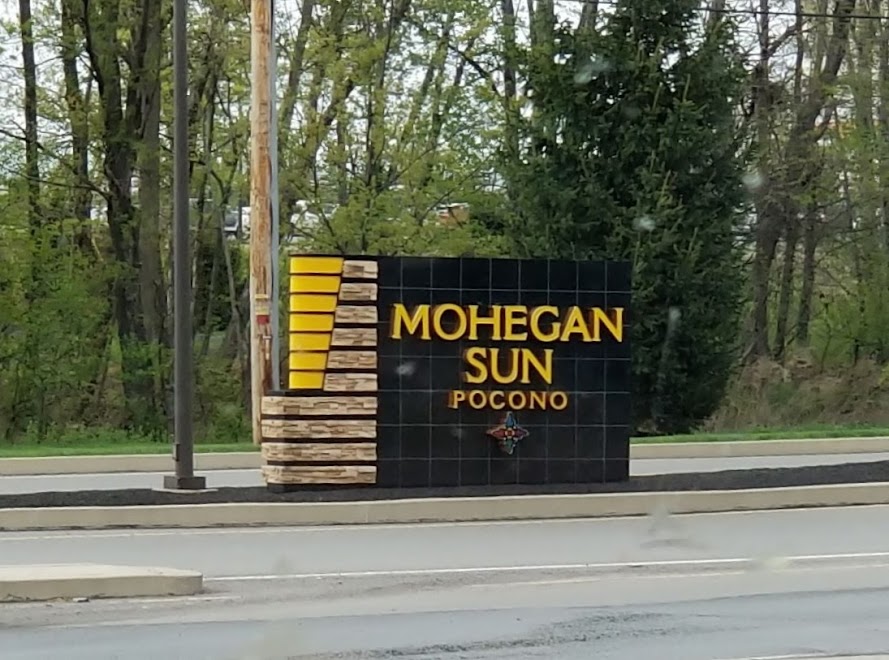 Using the Casino Camper website, Rob had scoped out a casino along our route that allows overnight stays (no hookups) in the parking lot. Because the casinos usually have more proactive 24 hour security, at night we tend to feel a bit safer in a casino lot than a Walmart.

Our destination would be the Mohegan Sun Casino in Pocono, PA. Since the casino was over 250 miles away, it would be a long, four hour, monotonous drive on I-81, at least for me and Sparky who was in his usual hiding spot behind the couch. 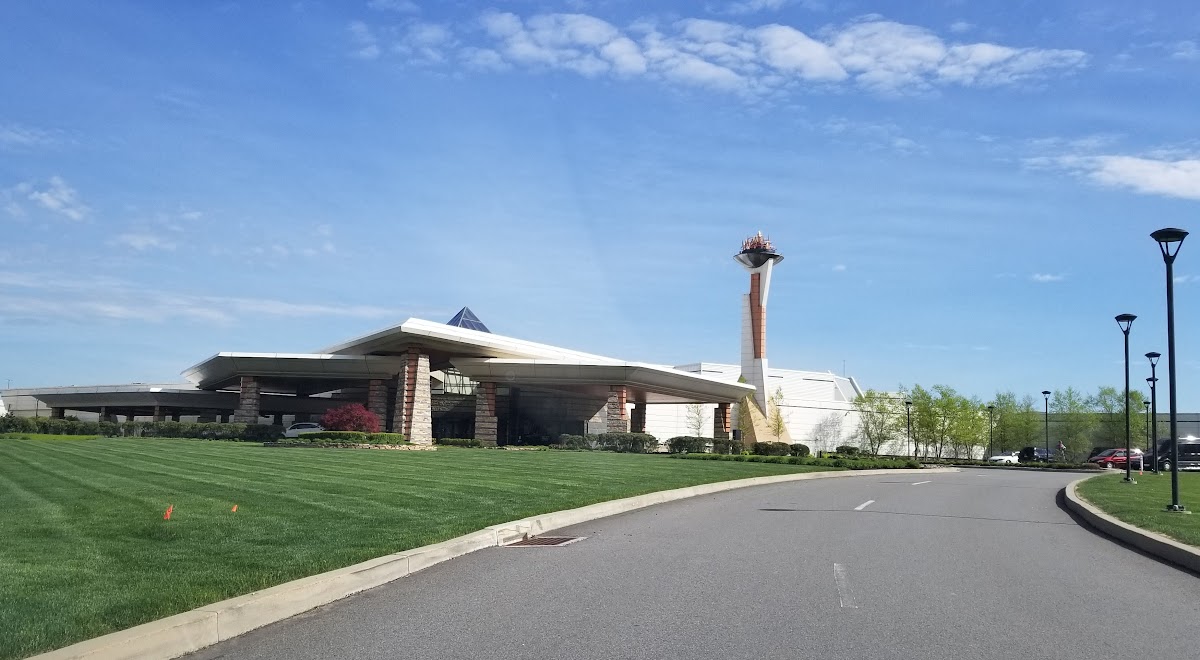 Before our arrival to the casino we had called to clarify which lot we should park in as there appeared to be conflicting information on the Casino Camper forum. We were told to use lot “C” which is different than the “D” and “E” lots that people mentioned on the forum.

Although they have courtesy shuttle buses to the casino, not being gamblers, we didn’t bother. We had thought we might try a restaurant there but none of the reviews were that great so it was a quiet evening on board the bus. Well, except for a thunderstorm that rolled in after dark but that wasn’t of any consequence. 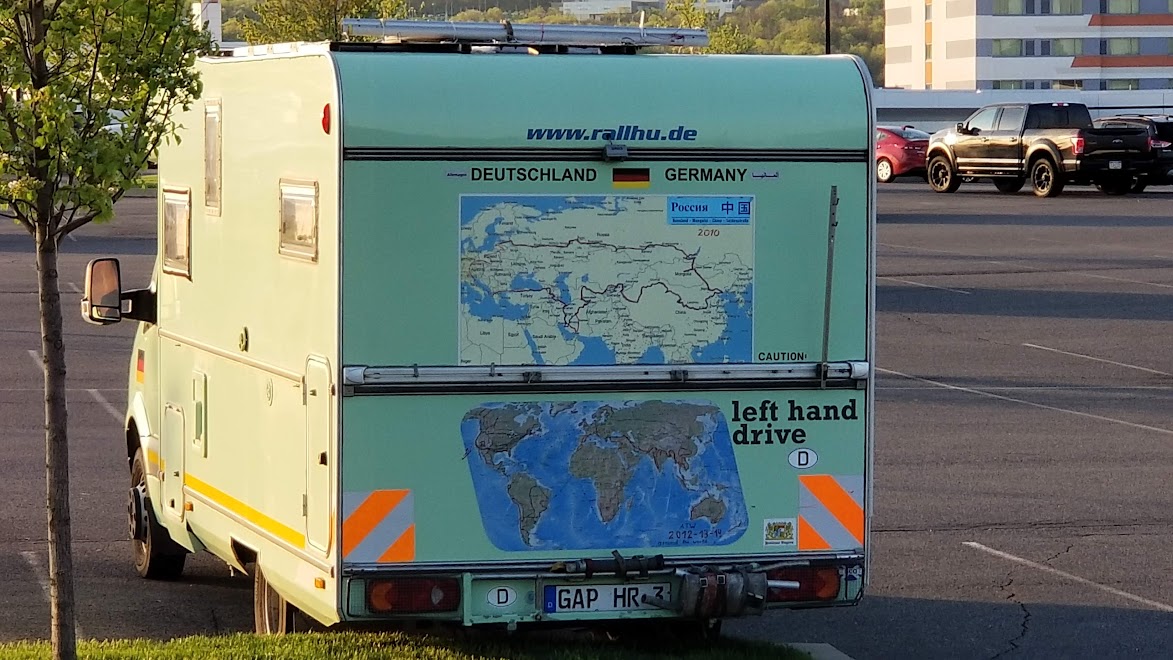 The next morning, Rob unhitched the van and we headed over to D’s Diner, a nearby restaurant for a decent, relatively inexpensive breakfast. If there’s a next time staying here, we might not bother unhitching as there appeared to be adequate room to park the coach in a lot next to the restaurant, although it was dirt and appeared a bit uneven. Guess it would depend on how crowded the restaurant gets. 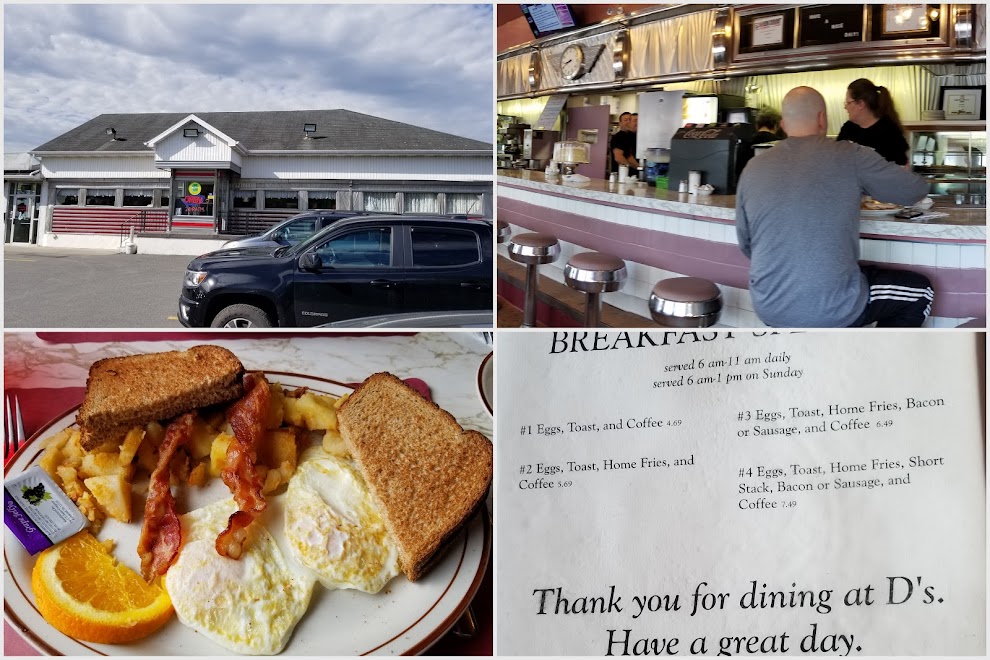 Our next destination was a campground we were very familiar with – Arrowhead Marina & RV Resort in Glenville, NY as a visit with Rob’s 89 year old Dad in Albany was on our agenda. Of concern was the fact that he had recently fallen in the middle of the night which resulted in a hairline fracture of his femur. Thankfully no surgery was required, but he was in a rehab center for physical therapy for a few weeks which was where we went to visit. Fortunately he was back in his apartment after just two weeks and seems to be doing well. 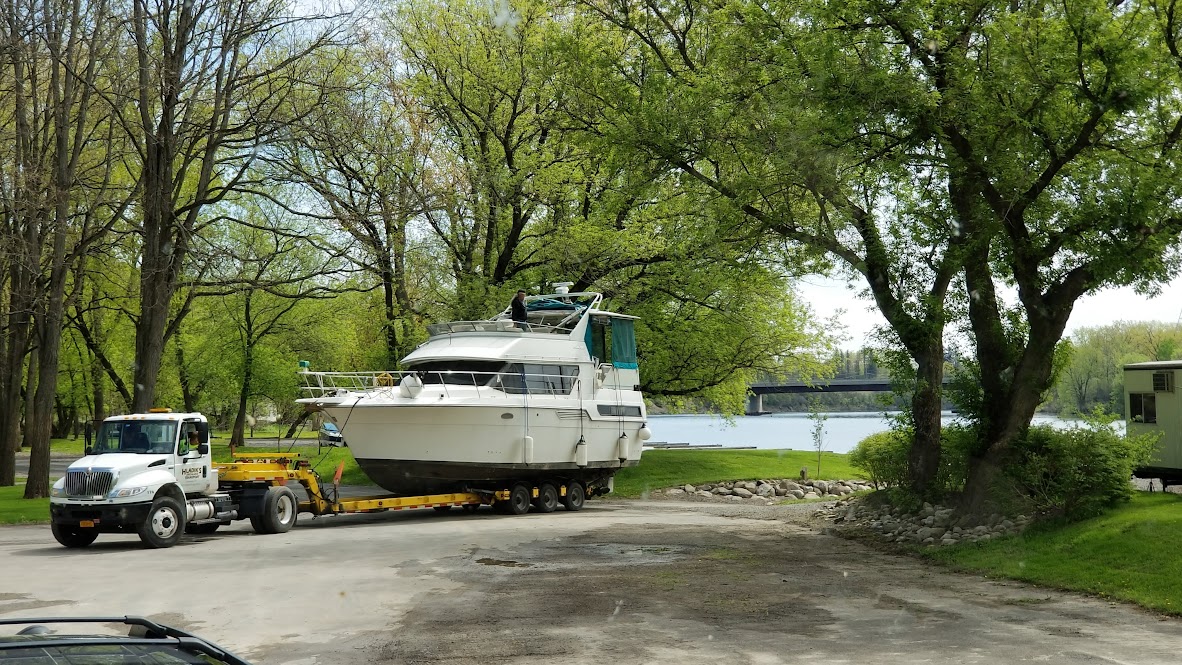 It didn’t take long for us to find our way to my favorite grocery store, Dave’s Marketplace in East Greenwich. If you ever visit RI, be sure to visit one of their nine locations in RI. And of course, we quickly found our way to several of our favorite restaurants (all documented in this post), like Gel’s Kitchen in West Warwick where we not only enjoy their hearty and really inexpensive  breakfasts ($1.99 Tuesdays, $2.60 the rest of the week) but also their 99¢ Hot Wieners on Wednesdays and $18.99 for two Fish & Chips w/chowder or lobster bisque on Fridays.

Hot Weiners, also known as NY System Hot Weiners, are a RI specialty made from a small, thin hot dog made of veal and pork and served in a steamed bun, topped with celery salt, yellow mustard, chopped onions, and a seasoned (usually cumin, paprika, chili powder, and allspice) meat sauce. If ordered with all the toppings, true Rhode Island patrons order them as “All The Way”. 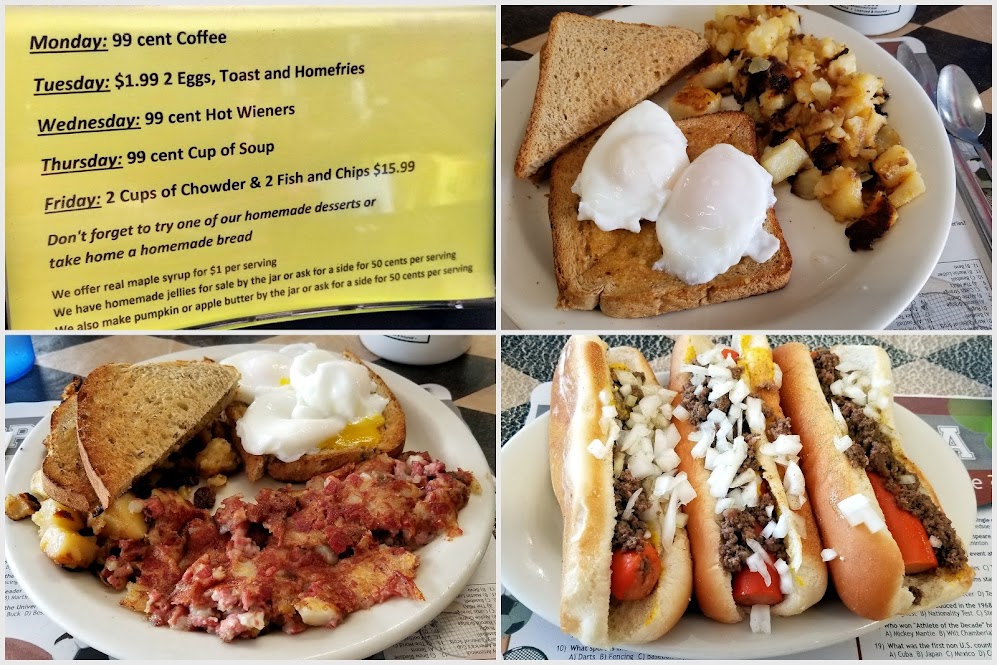 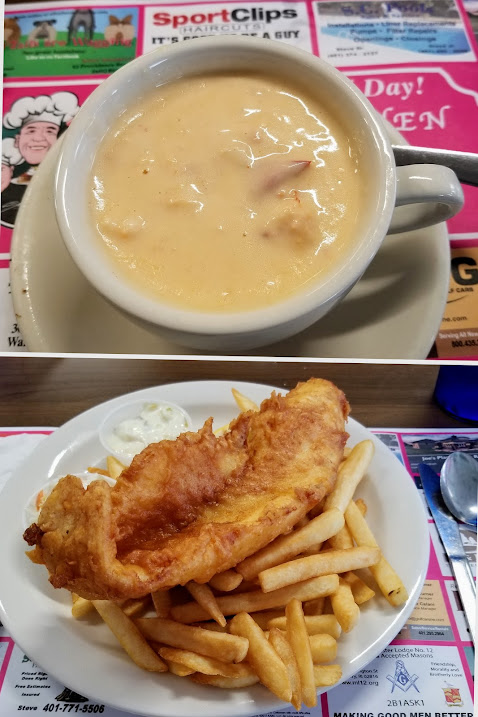 After being out west all winter where the food is very expensive (well everything is expensive, especially in CA!), we were craving some local seafood. Another local market, Stop & Shop, had the critters on sale on Memorial Day weekend for $6.99/lb and will even steam them for you while you shop. 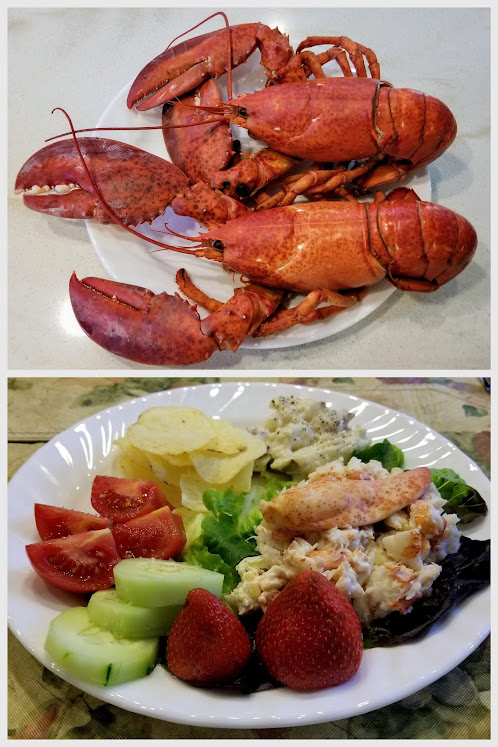 That was followed a week or so later by a late afternoon drive to Bon Bon Apetit in Exeter (about 9 miles from where we stay) for take out. Two awesome lobster salad rolls ($16) and onion rings. They often have clam cakes, chowder, lobster bisque, etc. but we never get beyond the lobster rolls. They were delish as usual! 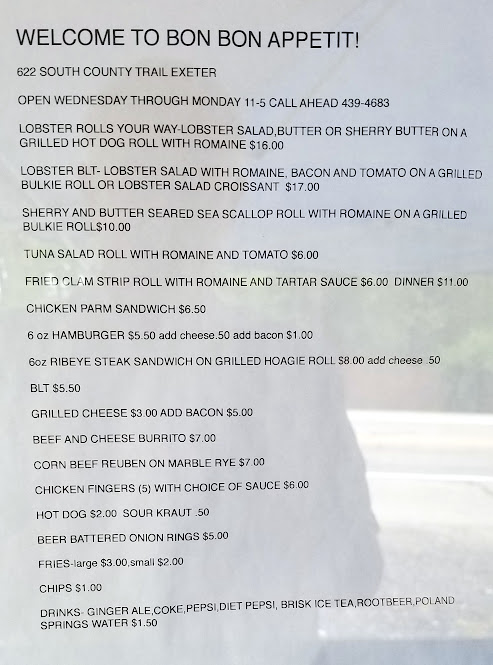 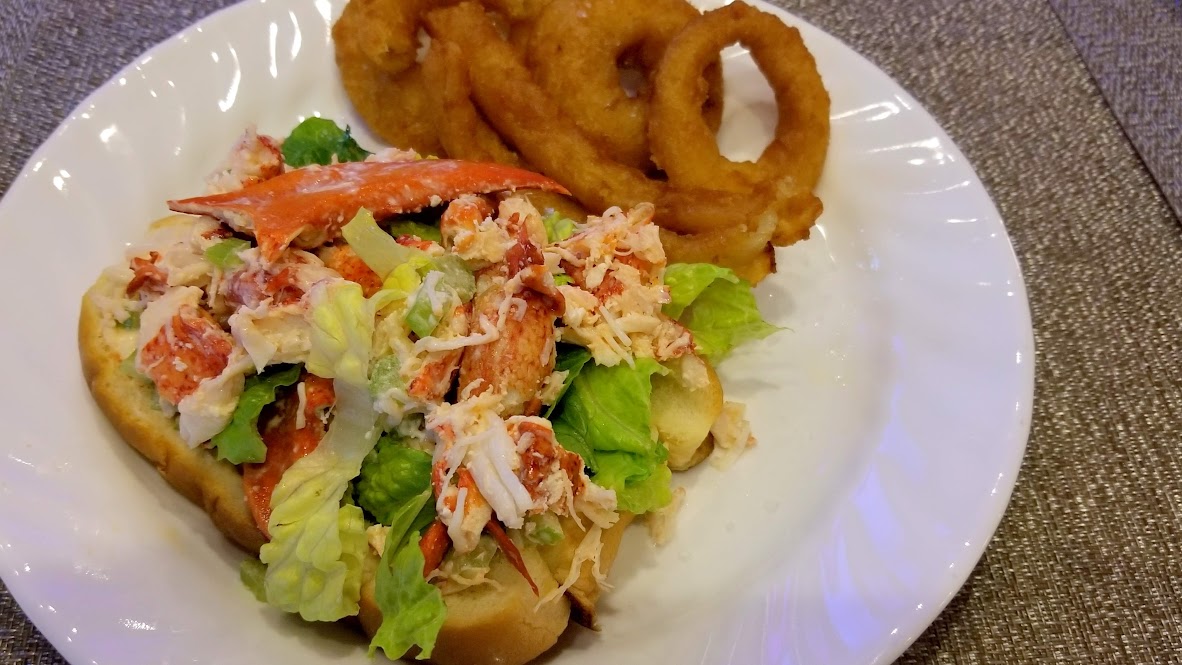 Did that satisfy our lobster fix? Not hardly but you’ll learn more about that our upcoming posts.

Besides stuffing our faces we had work to do! Our 35 foot Chris Craft boat, Quantum Leap, was ready to cast off her winter shrink wrap! Scheduled to be launched on May 23rd. Once we were settled in, we went into high gear to get her ready. The weather wasn’t exactly cooperative, we had to work around a few days of inclement weather.

Talking to some of our friends at the East Greenwich Yacht Club, we heard about the unusually hard New England winter. Not only did they have their share of snow but several nor’easter storms with high force winds caused damage to the docks and a number of the boats that wintered in the water. We had briefly talked about doing that again this year – so glad we didn’t! And even more surprising was hearing that one sailboat that was stored vibrated off its poppets (aka boat stands) in the yard and almost toppled over! Yikes, that’s pretty scary! 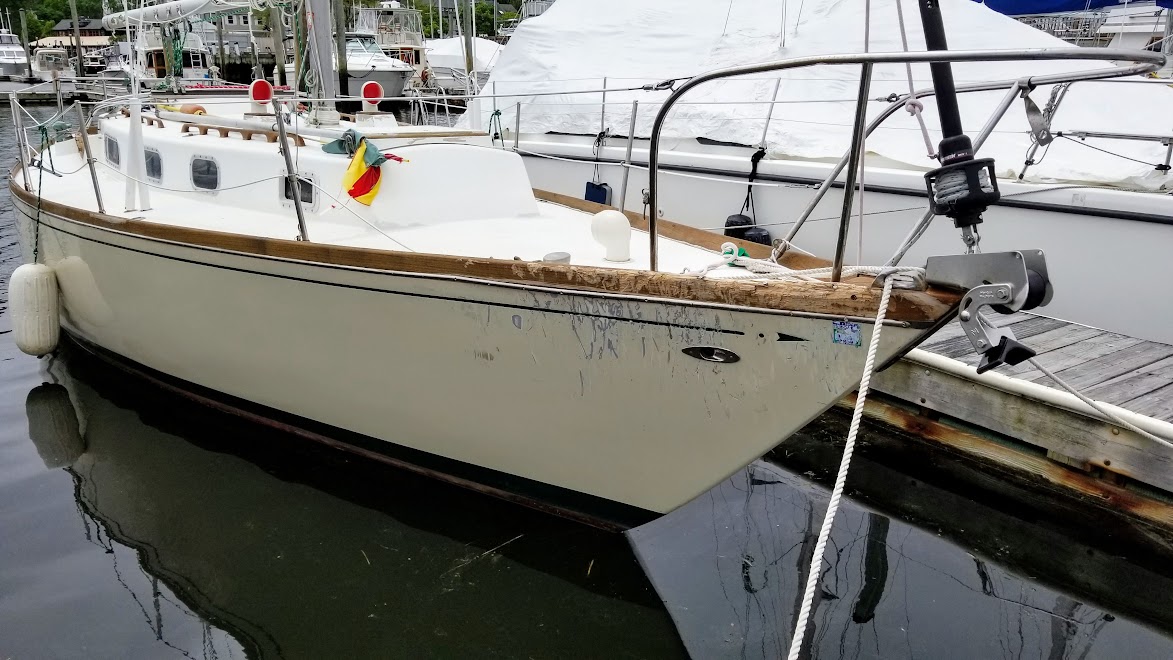 Usually by mid-May, the majority of boats in the yacht club yard have been launched. Not so this year, terrible weather this spring caused major delays in the launch schedule. The yard was uncharacteristically full when we arrived back. To make up for the delays, in just two days of decent May weather 50+ boats were launched. 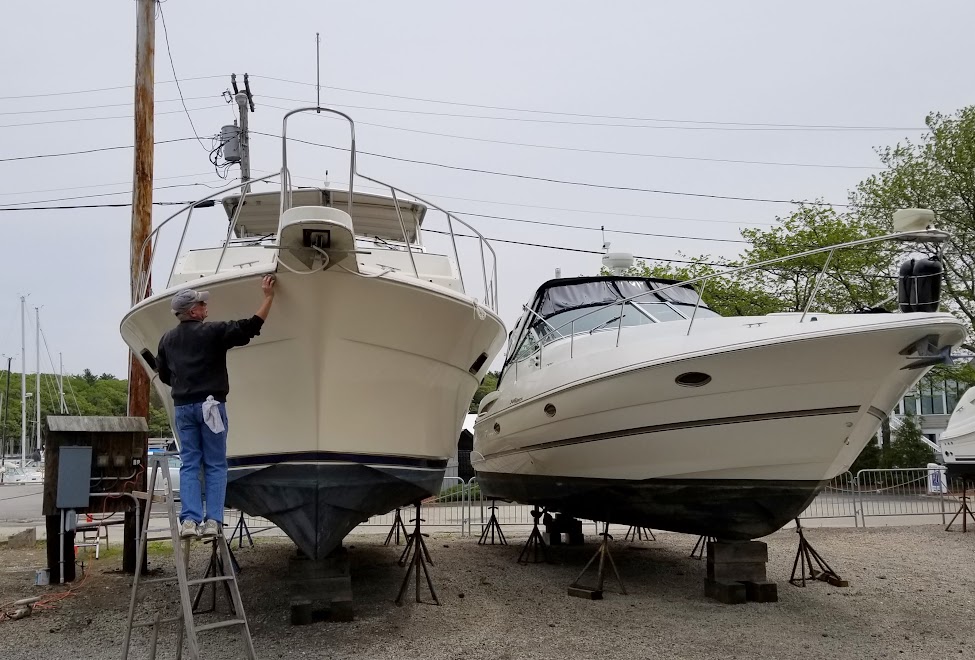 Fortunately we were able to pull everything together so we were ready on launch day! 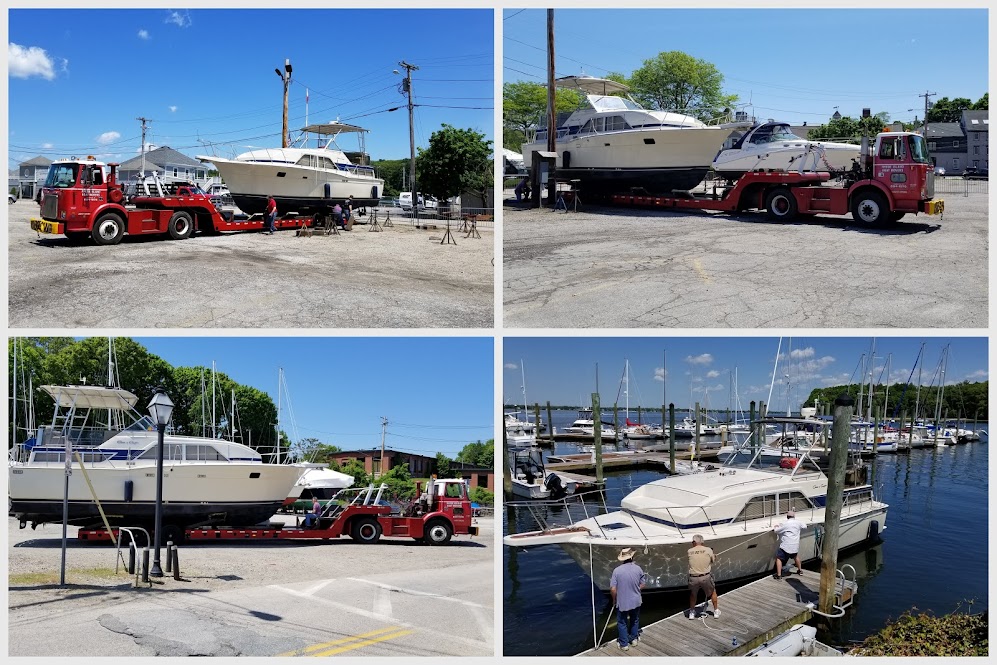 Although we spent some time cleaning all the grunge from the topside, our focus on the boat was interrupted by a planned side adventure. Within a few short weeks of our arrival we would be departing again….so where do you think we are going now?