After our rather exhausting last few days playing tourists in New Orleans, we were looking forward to a few days of relaxation. Where might we find that? Perhaps at Davis Bayou Campground, a National Park Service campground located in Gulf Islands National Seashore in Ocean Springs, Mississippi. 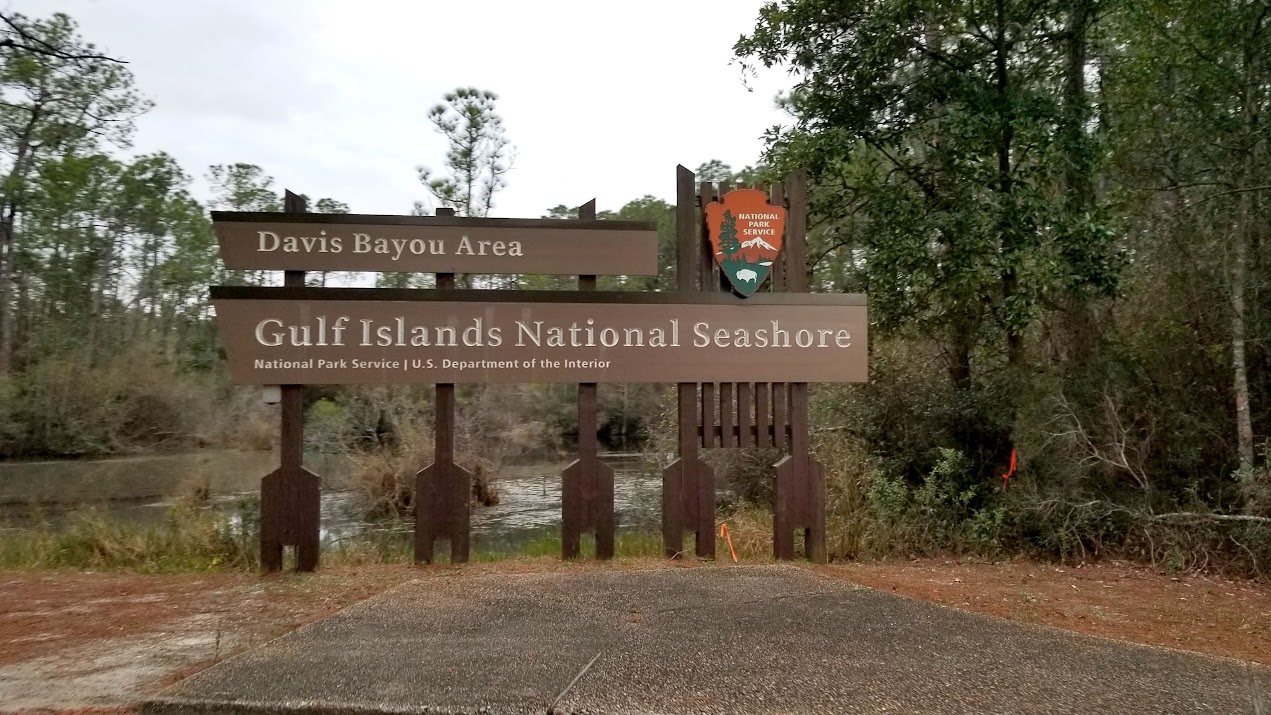 Fog surrounded us as we crossed the bridge over Lake Pontchartrain on that Saturday morning. There is water out there isn’t there??? Fortunately as the day progressed and our route on I-10 carried us eastward and away from the water, the fog eventually cleared, making for a pleasant 1 1/2 drive to our destination. 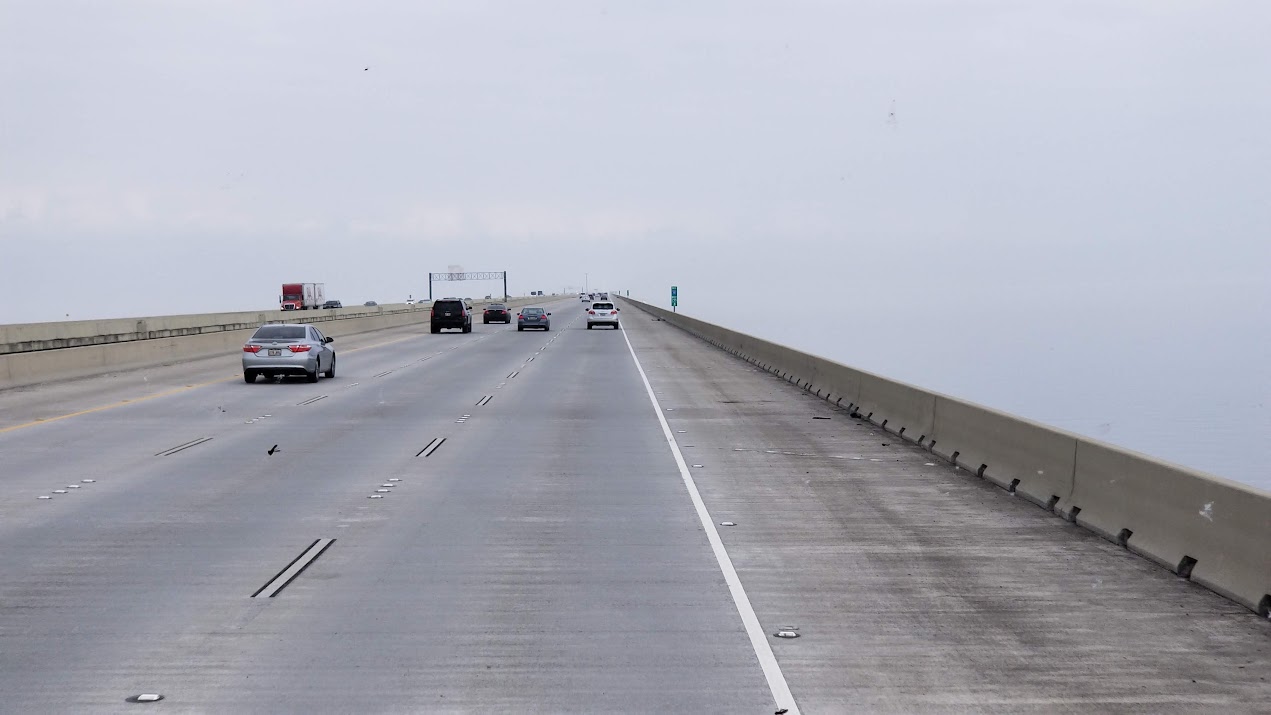 Perhaps it was the lousy, wet weather when we arrived or perhaps this was a case where not liking your site turns you off to the entire park. As usual we did a lot of research before deciding on a site, looking at satellite images and checking out individual site photos on campsitephotos.com. That usually works out well for us but not so much this time. Part of the problem was that by the time we made our reservation, the availability of sites was limited so we didn’t have a lot of choice.

Even though we could see that our site (#44) was between two huge trees, there was no way of knowing from the photos or satellite images that backing in would be difficult because of another large tree and the site post across the narrow road. It took quite a bit of maneuvering for Rob to get the beast into the site without hitting anything. The next morning we headed out for breakfast to Buzzy’s Breakfast Joint where we both had omelets. Both food and service were very good. After breakfast we headed out to explore the area and the park. 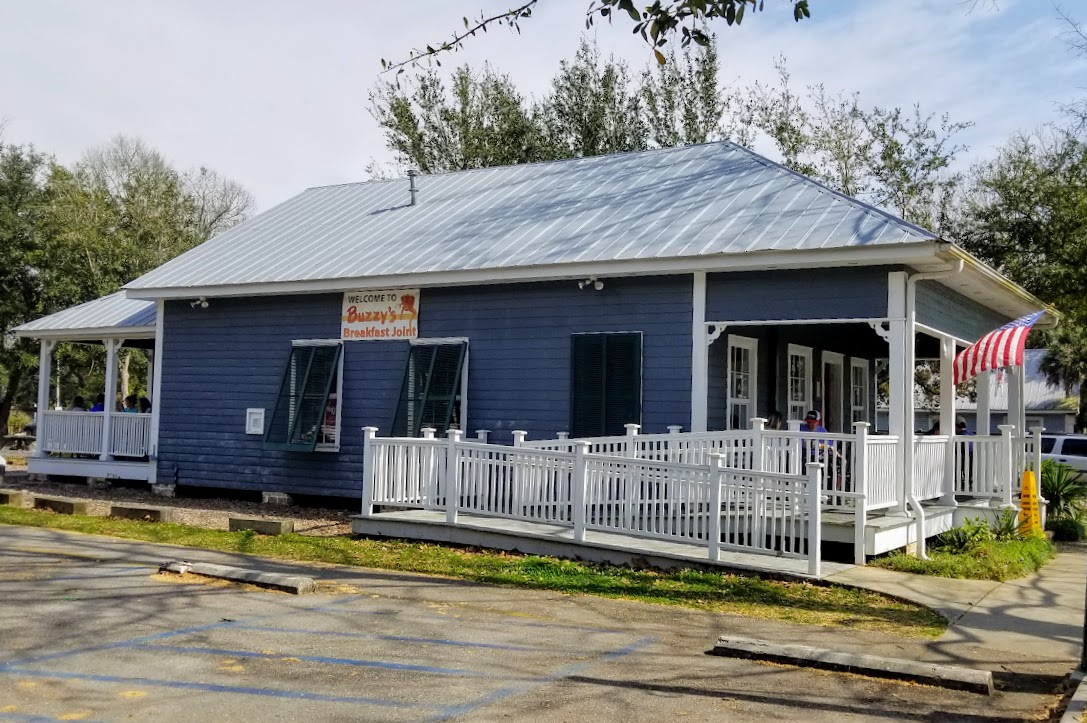 Ocean Springs calls itself “the city of discovery” in recognition of the French establishment of Fort Maurepas and a settlement here in 1699. It served as the first capital of French Louisiana and became known as “Ocean Springs” in 1854, named by a New Orleans physician who believed the local springs had medicinal qualities. Like many other towns along the Gulf Coast, Ocean Springs was severely damaged by Hurricane Katrina in 2005 but has since rebuilt. Today it is a vibrant and eclectic arts community, home to numerous galleries, artist studios, and over 100 restaurants.

Driving along Harbor Road, we passed by docks occupied by dozens of shrimp boats. Shrimping has been a major industry in Mississippi but it has seen a significant decline after Hurricane Katrina in 2005 and the Deepwater Horizon oil spill in 2010. 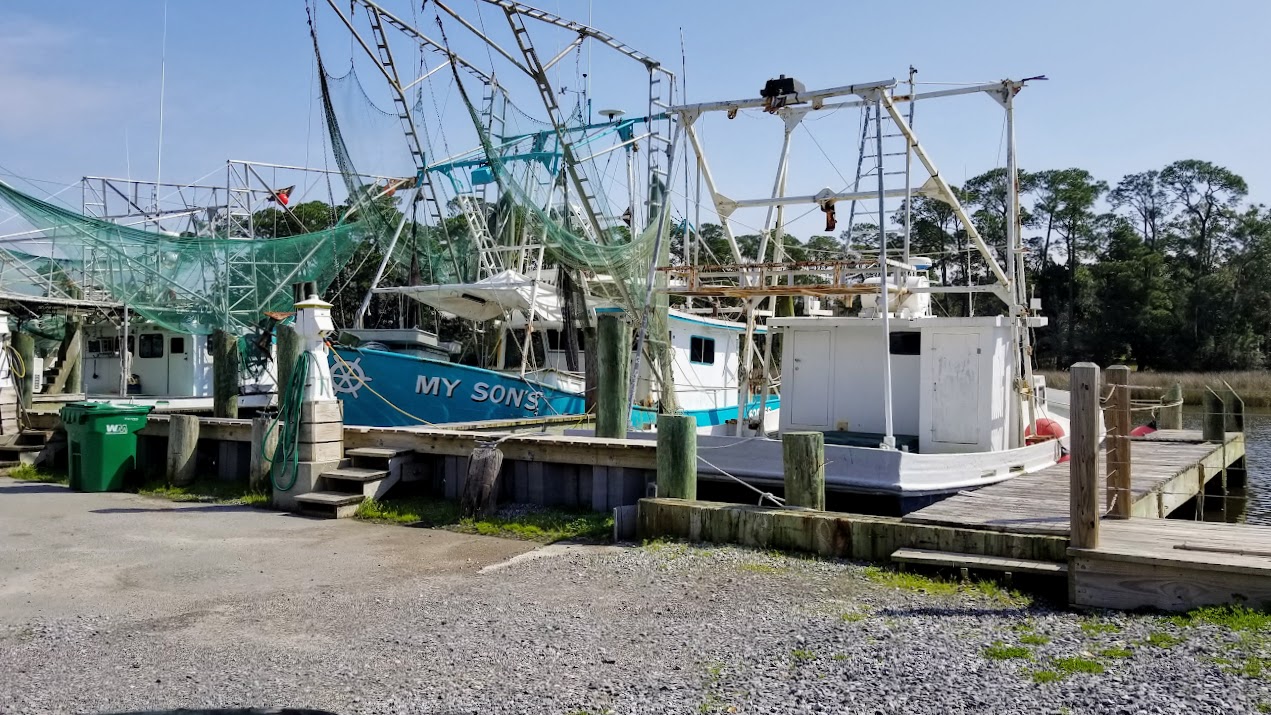 After exploring the town, we drove back to the park where at the William M. Colmer Visitor Center, we perused the exhibits which highlighted the history of the National Seashore, how the barrier islands were formed and showed examples of the flora and fauna of the Gulf National Seashore. 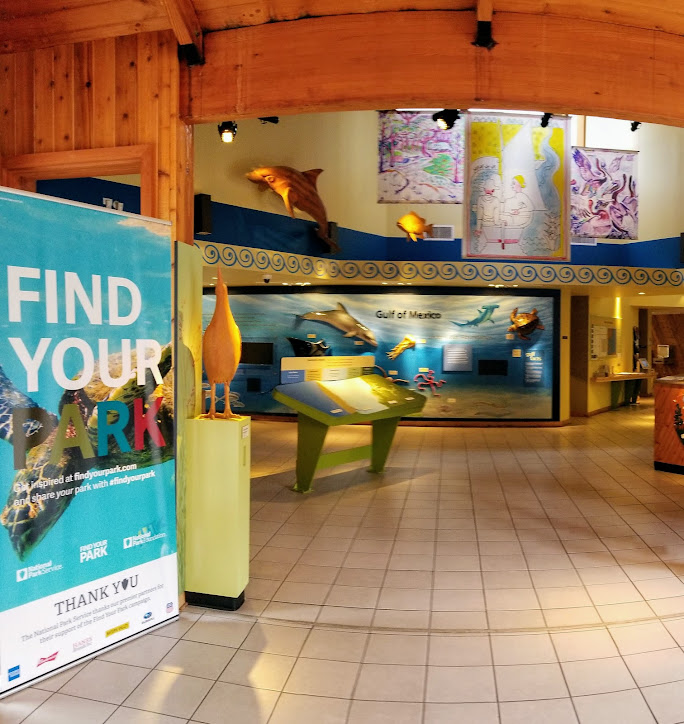 Nature’s Way Trail is an easy, 1/2 mile path that provides scenic overlooks of the bayou. There were numbered posts that correspond to descriptions on a printed brochure (maybe available at the Visitor Center?) but we didn’t have one so the numbered posts meant nothing to us. Instead we had to be satisfied reading several information panels about the plants and animals along the way. Except for a few views of the bayou, there wasn’t much else to see on the trail.

Across the street from the start of the trail was Gator Pond. Lying in the grass on the edge of the pond was a gator about 7 feet long. How exciting! And in the water lying on a log were a bunch of turtles. How nice of all of them to pose for us! When we stay at campgrounds that just have water and electric and no sewer we tend to eat out more since we do not want to fill up our gray tank too quickly.That sounds like a good rationale for eating breakfast out every morning, don’t you think?

At McElroy’s On The Bayou in Ocean Springs (not to be confused with McElroy’s Harbor House which is owned by the same family in Biloxi), I digressed from the usual eggs and ordered the Shrimp & Grits ($7.25). Unlike the usual shrimp and grits, sauteed shrimp, bacon and green onions in a Cajun cream sauce was served on top of a fried grit cake. 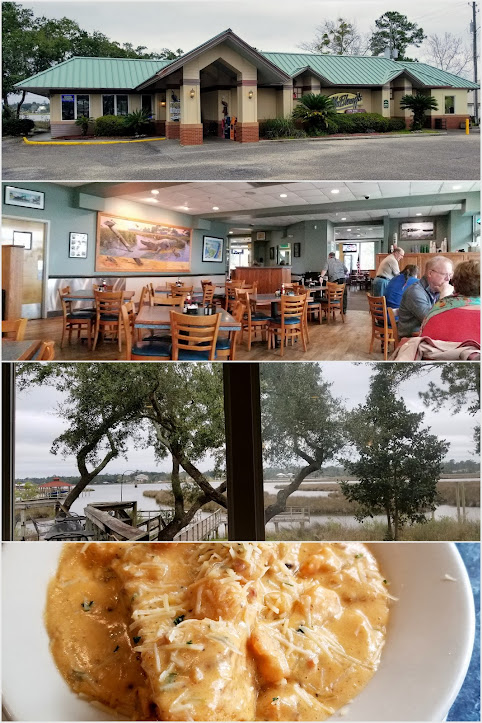 Oh my, rich but oh, so delicious!  Rob had a more standard breakfast – the Mini Cake Plate ($7.75) which had two mini pancakes, 2 slices of bacon and 2 eggs. That was good as well. We would definitely return here if we are in the area again.

As we headed towards Biloxi, we drove past Crooked Feather, a 30-foot-tall Indian head, carved in red cypress.  According to Roadside America, this elongated Native American head with a distinctive headpiece was created by sculptor is Peter Wolf Toth who has carved over 70 of these “Whispering Giants” as his tribute to the the North American Native Americans. However, on Mr. Toth’s website where you can see photos of every carving he has done, there is this note about this particular sculpture:

“This is a replacement statue carved by Ocean Springs sculptor Thomas King in 1999 due to damage to the original by rot and termites.The story goes, that the city powers that be, thought that Peter Toth had died, so they commissioned another sculptor.”

No matter who carved it, it was pretty impressive! 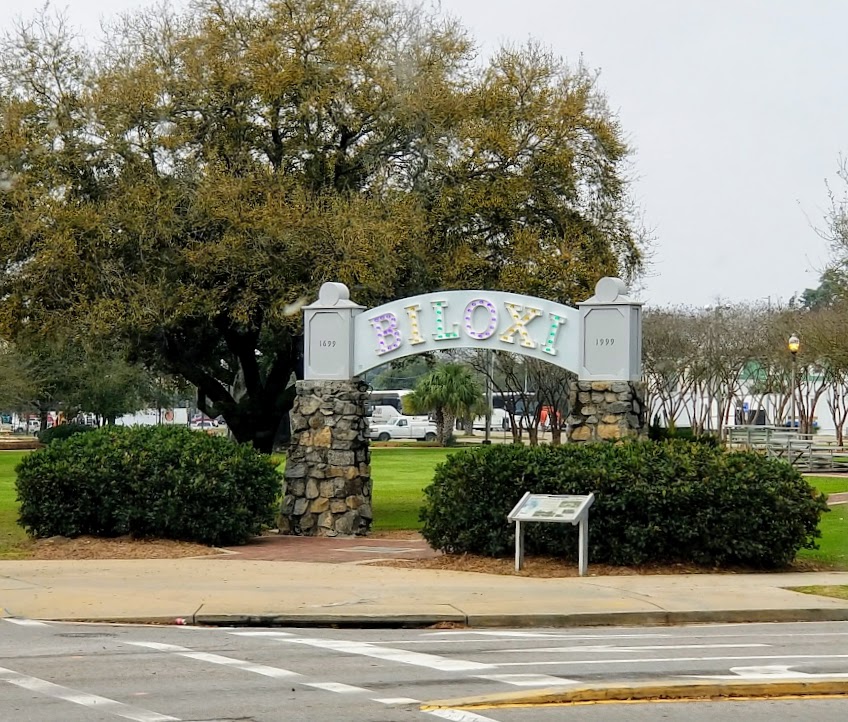 As we drove closer and closer to Biloxi, we passed by casino after casino. 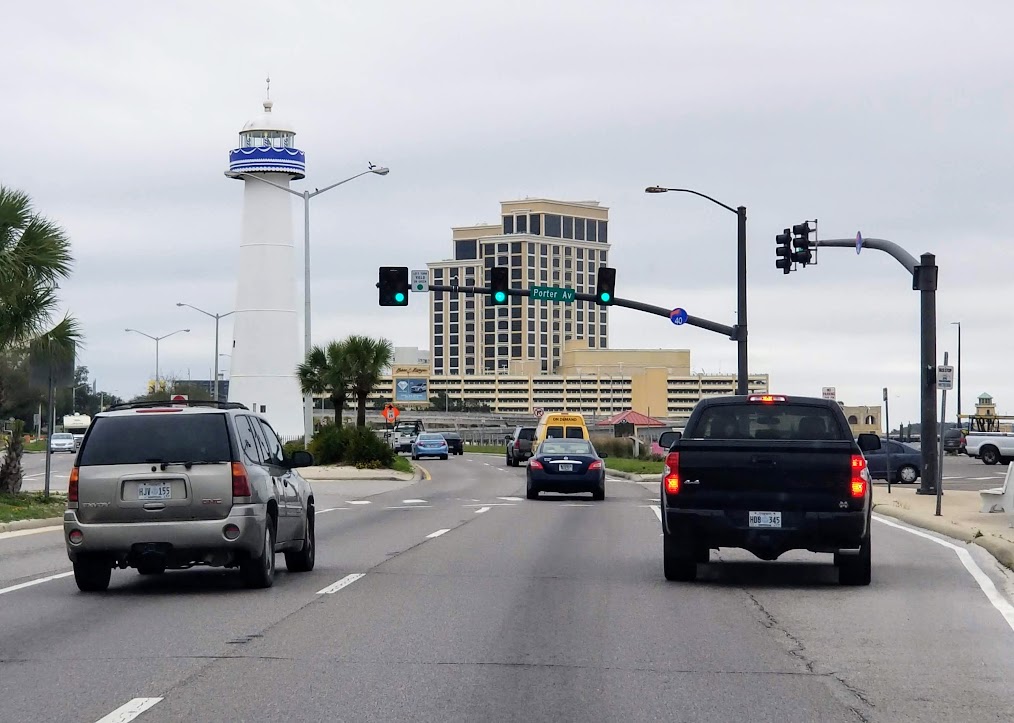 Not being gamblers and having seen our fill of the Biloxi waterfront, we turned around and headed back towards Ocean Springs continuing on to the Mississippi Sandhill Crane National Wildlife Refuge in Gautier, MS. 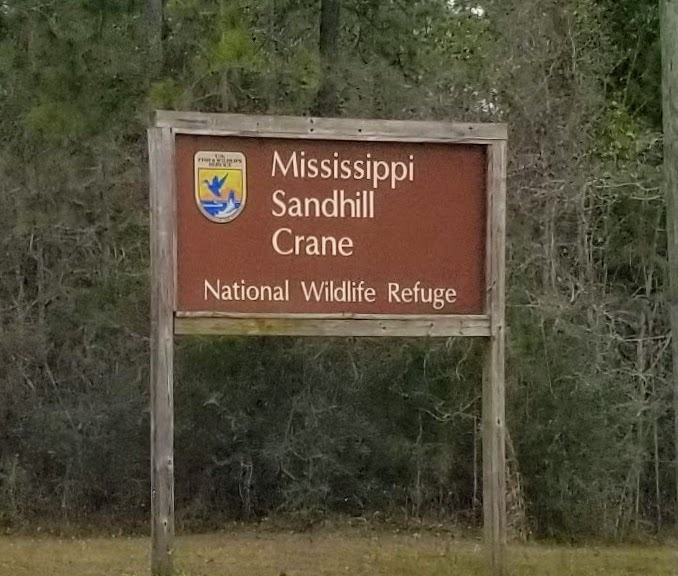 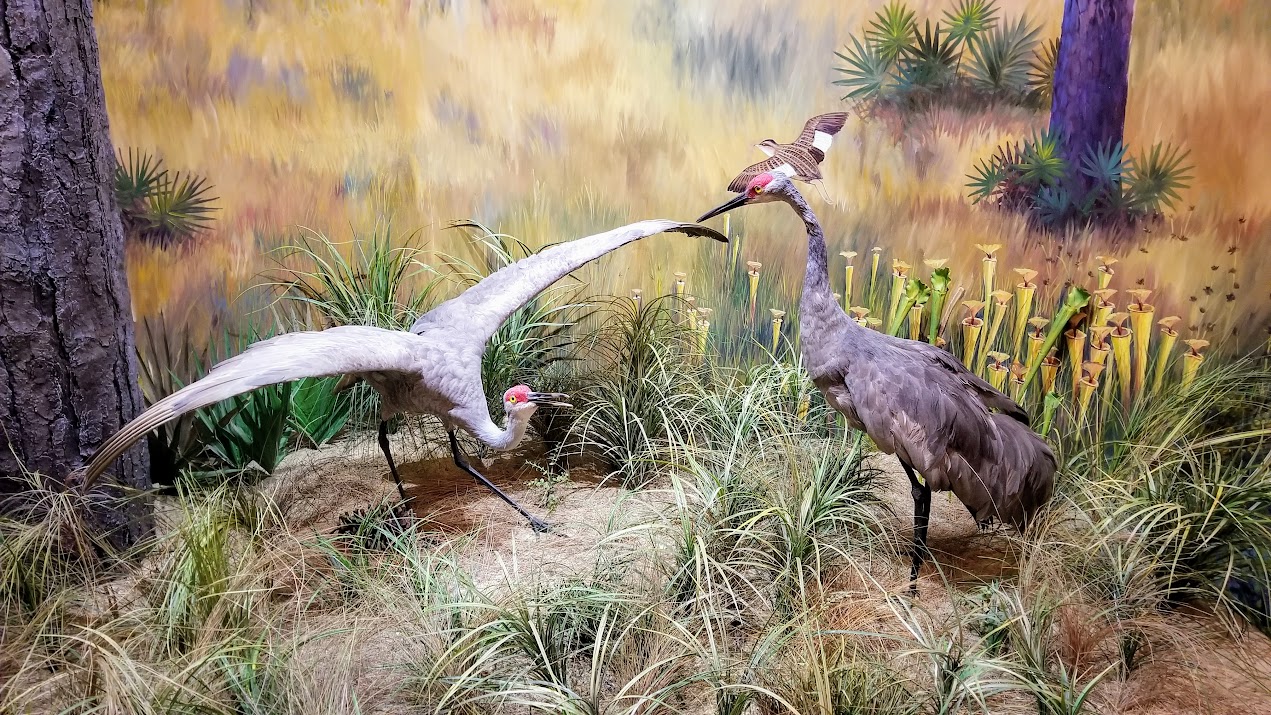 The refuge was established in 1975 to protect the critically endangered Mississippi sandhill cranes which at the time numbered only 30-35 birds. The refuge not only protects the cranes but it also protects the last endangered, wet pine savanna habitat. 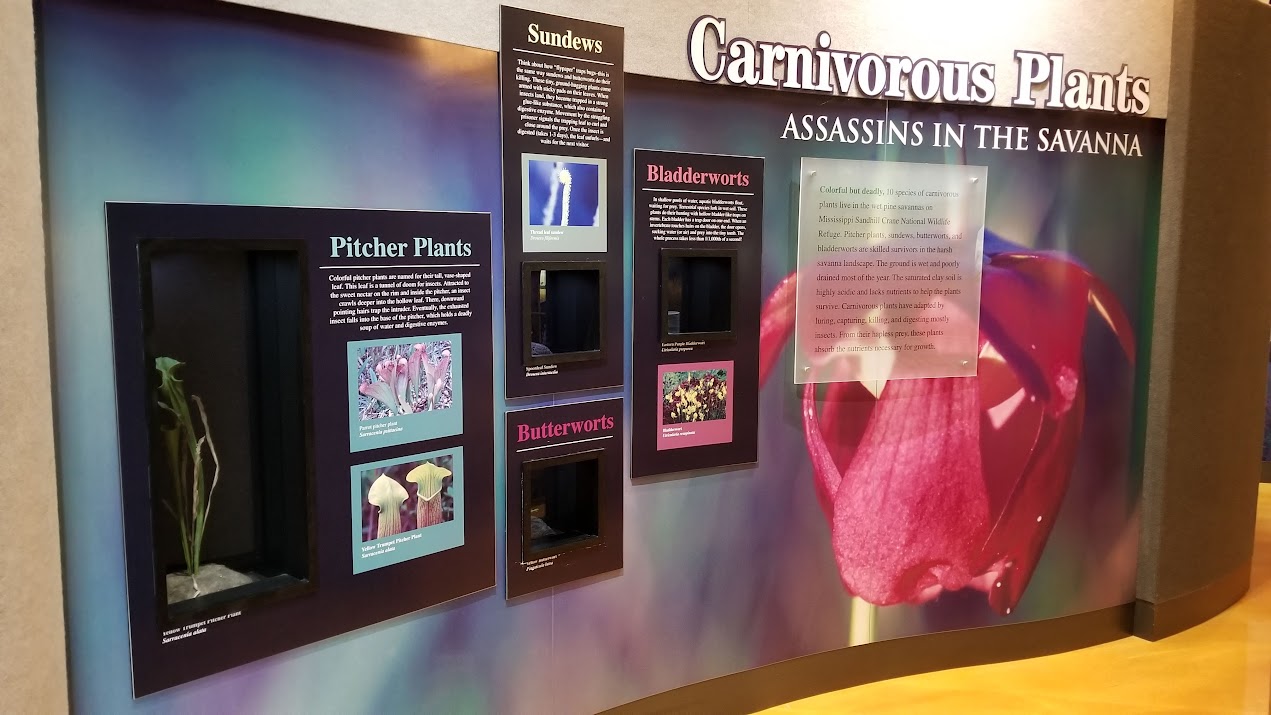 Between the interactive exhibits at the Visitor Center that highlight the elusive Mississippi sandhill crane as well as the neighboring plants and animals that call this wet pine savanna habitat home and a long conversation with the refuge volunteer, we learned that they:

Free Crane tours are offered in the fall and winter months and there are also several hiking trails within the refuge. Unfortunately tours were not offered when we were there. Because it had rained the day before, hiking the trails didn’t appeal.

As part of the recovery program, beginning in 1985, the second viable egg from a two-egg nest, was frequently removed from the nests and taken to partnering organizations to be hatched and reared in captivity. To avoid “imprinting” with humans, any time a person had to come in contact with the bird, they would wear a crane suit. 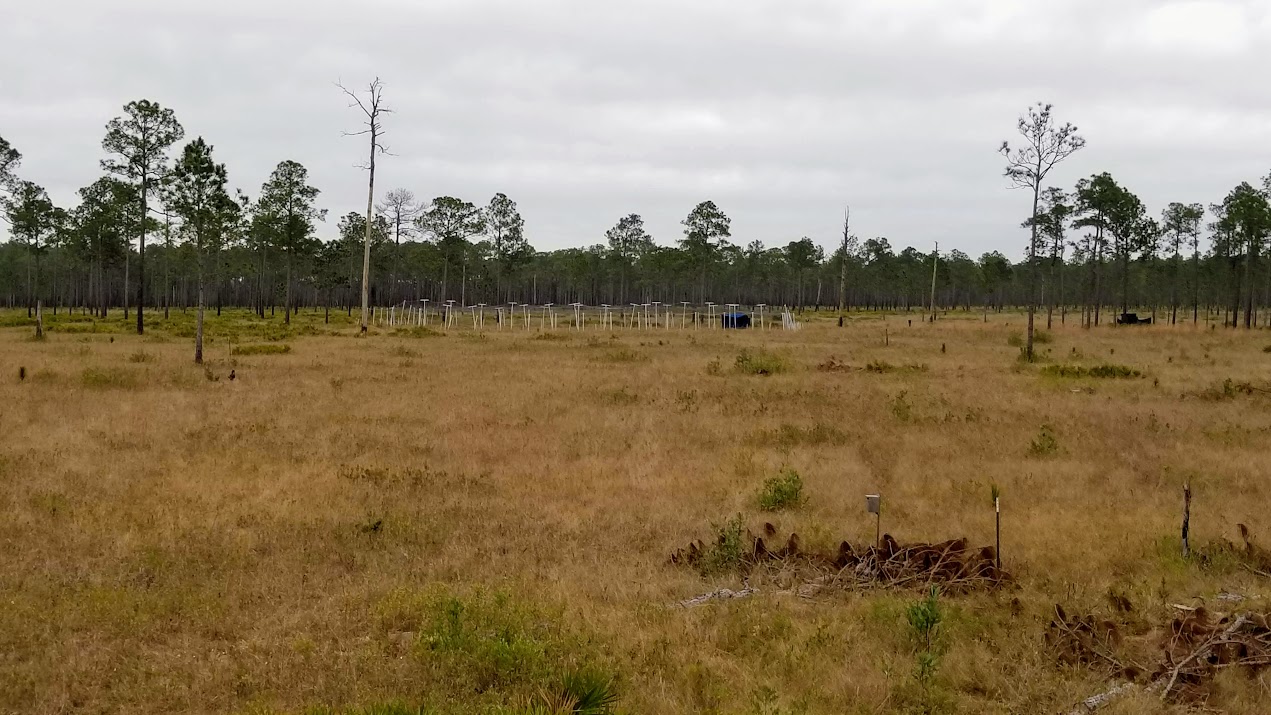 After the cranes are fully grown, they are captured, banded and brought to the refuge where they are released into large pens so they can acclimate to their new home and surroundings. Wild cranes often wander over to the pen to introduce themselves to their new neighbors!

Inside the Visitor Center, at the windows facing the savanna, there were a number of binoculars and telescopes set up so visitors could get a good look at the cranes in the pen. Outside in the field between the Center and the pen they also had a very tall (at least 10 feet of the ground) blind with a ladder to allow visitors access to it. 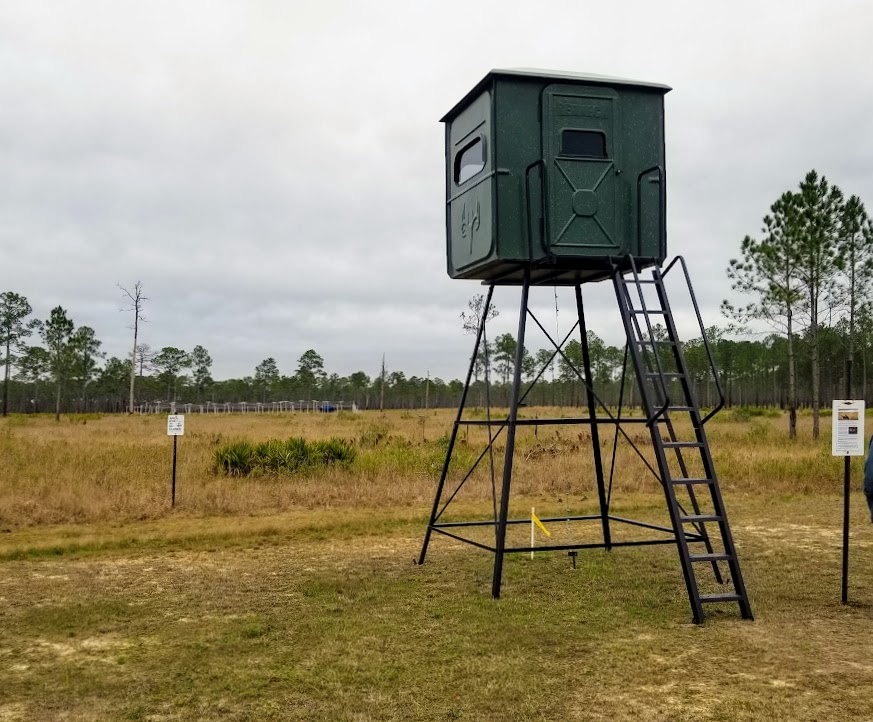 A telescope and a pair of binoculars gave us the opportunity to see at least three young birds inside the pen and another three adult birds outside. Very cool! 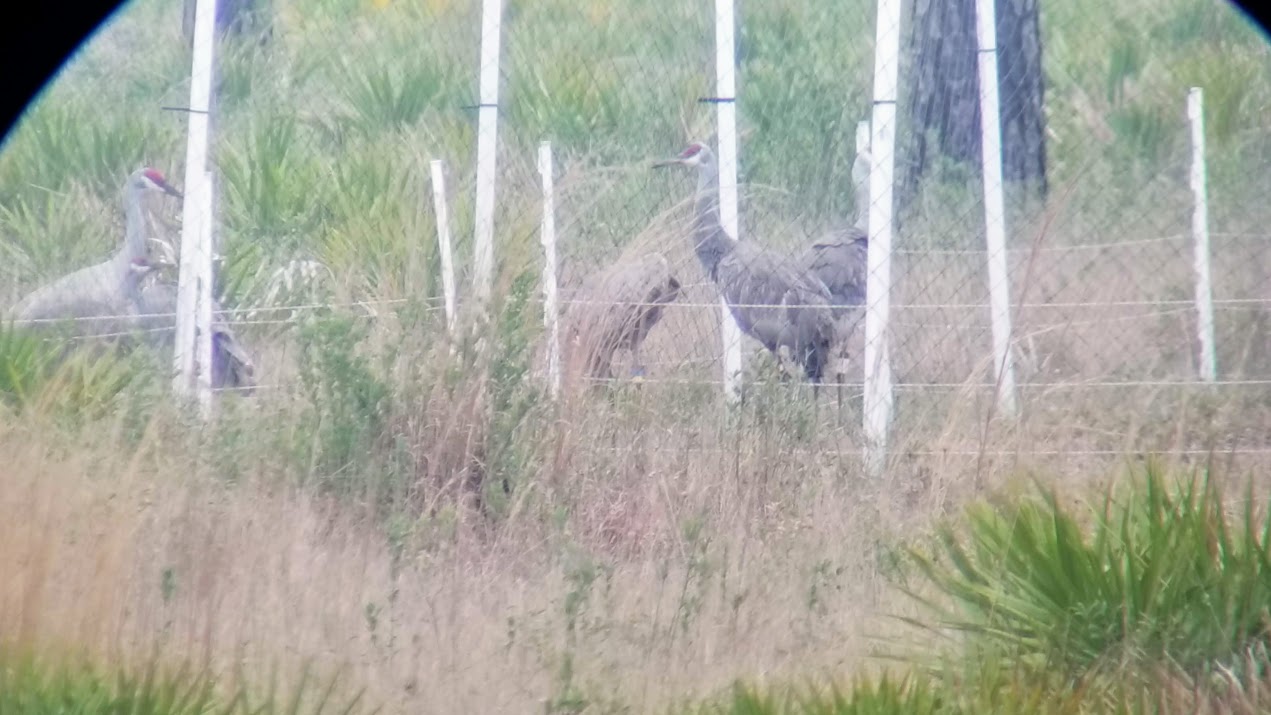 The captive birds are kept in the pen for a month, then they are released to the wild. This program has been so successful that 90% of the Mississippi sandhill crane population are captive reared. Today the population is currently at approximately 129 birds.

Now that we had been educated on the Mississippi sandhill cranes, it was time to leave to return to the coach. We certainly had an enjoyable stay in Ocean Springs! Where did we go next?