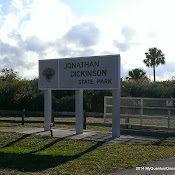 We were off to a rather late start, not sure why except that we weren’t in any particular hurry and we seem to be having problems getting moving in the morning these days, so it was about 10:30 a.m. by the time we pulled out of Stage Coach. Not much I can say about the trip – it was pretty uneventful (did I mention boring???) which is always a good thing. At exit 96 we turned onto County Route 708E toward Hobe Sound, then taking a right onto US-1, finally arriving at the campground around 3:00 p.m.

After checking in at the registration office, we headed for our site. The park has two campgrounds – the River Campground and the Pine Grove Campground which is where the site (#71) we had chosen on Reserve America was located. Once again, yours truly 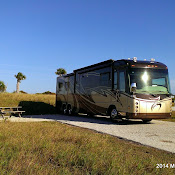 leading the way, despite the rather simplistic map took a wrong turn, heading towards the River Campground which was about 4 miles down the road. 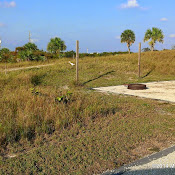 Luckily I realized it before we had gone too far and just before a parking lot so Rob was able to turn the coach around fairly easily. Hmmm, if I keep messing up with the map, maybe I’ll get fired! 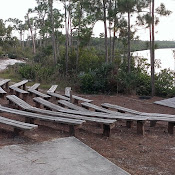 Pine Grove campground is clearly new and is very modern and up to date with large spacious sites, very nice bath houses and mostly full hookup with 50 A – excellent for big rigs.

River campground is older, more heavily vegetated with most of the sites targeted at small rigs or tents. Some sites have 50A, the remainder 30A and none have sewer. One site in this section is listed as suitable for a 40′ rig, a few can handle rigs in the 30′ range and the rest are for small rigs/tents.

This park is a great place for outdoor 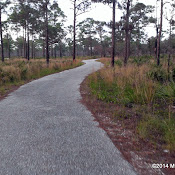 enthusiasts as the Loxahatchee River, Florida’s first federally designated “Wild and Scenic River” winds it way through the campground offering a variety of opportunities for fishing, canoeing, and kayaking. In addition there are biking/hiking trails, horseback riding and nature programs. The bike trails here range from easy paved paths to rugged “off-road” trails for enthusiasts. 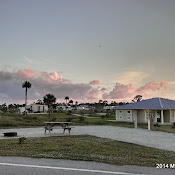 Kayaks, canoes and small motorboats can be rented at the River Store. Not interested in renting, then take a guided wilderness river boat tour also offered at the River Store. Visit the 27-foot-tall observation tower, which sits on Hobe Mountain, the highest natural hill south of Lake Okeechobee, standing at a ‘commanding’ 86 feet tall. The observation tower gives visitors 360-degree views of the park.

If you run out of things to do at the campground, Hobe Sound sits right next door to Jupiter where famous celebrities such as Burt Reynolds, Celine Dion and Tiger Woods own homes. Tour the Jupiter Inlet Light House, pedal or walk along Beach Road and other trails past the many gorgeous homes or spend some time at the beach and Blowing Rock Preserve. 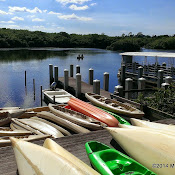 Overall, the campground is very well maintained and has wide paved roads. The sites in the Pine Grove campground area are packed gravel, well spaced and super easy to maneuver into. If you are looking for a heavily wooded or shady campground, this is not the place to come unless you can fit into the River campground and don’t mind not having a sewer hookup.

The entire park, particularly the Pine Grove Campground, suffered extensive damage in 2004 from 4 hurricanes: Charley, Francis, Ivan and Jeanne and  again in 2005 from Wilma. Many of the non-native Australian pines that used to populate the area are gone – in fact there aren’t any in Pine Grove at all – at least none that we could see. The 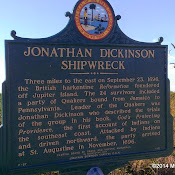 Pine Grove Campground was totally rebuilt in 2005 and new palm trees and shrubs have been planted but they have not matured as yet. It wasn’t a problem for us – on our site the living space on the passenger side faces north so in the afternoon it stays nice and shady. We’ve also had a few days so far that were overcast and showery, plus some serious wind – the beaches are just across A1A to the east. What a great place and for only $13 per night (senior FL resident rate)! If we had a complaint it would only be noise from traffic on A1A which is very close, but for the most part that didn’t bother 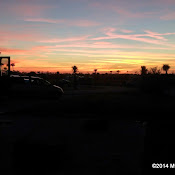 There is quite a bit of history associated with this park. According to the history of the State Park found on National Park Service website, the park is “named for Jonathan Dickinson, a Quaker merchant whose vessel shipwrecked nearby in 1696. During 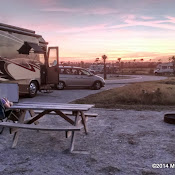 World War II, the land the park now occupies was home to Camp Murphy, a top-secret radar training school with over 6,600 men. The land became a state park in 1950. Far upriver is the Trapper Nelson Interpretive Site, the restored homestead of a man who came to this area in the 1930s and lived off the land, trapping and selling furs. He became famous as the ‘Wildman of the Loxahatchee,’ opening his ‘Trapper’s Jungle Gardens and Wildlife Zoo’ to the public. The only way to get to his homestead is by boat. He mysteriously died of a gunshot wound at the age of 59. His homestead  and zoo is now known as the Trapper Nelson Zoo Historic District.

Lots to explore during our two week stay here. By 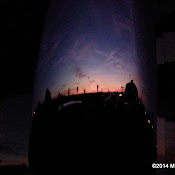 the time we settled into our site, it was after 4:00 p.m. so we didn’t do much for the rest of the day. We love our site because we are up on a “hill” and have a lovely view of the western sky as the sun sets each night.

More on the rest of our stay to follow.