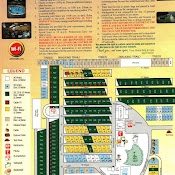 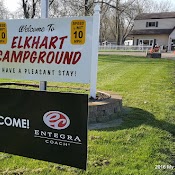 Located in the heart of the RV industry and Amish country, this campground offers 278 sites, 83 of which have 50 amp electrical service. Some of the sites have cable. In addition to the RV sites, they also have cabins which are available for rent. Location is very convenient to I-90 as well as several major state and county roads. 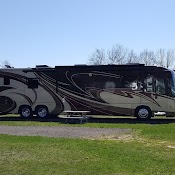 We were here for an Entegra Motorhome Springfest rally so we were pretty busy during our stay with a lot of activities and were surrounded by fellow Entegra owners. Overall, even though it appears to be an older campground, we felt it was a decent 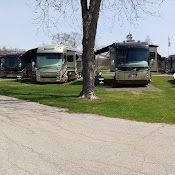 place to stay. Pull thru sites were long enough for the rig and our Honda Odyssey tow vehicle. Our particular site (#718) was gravel bordered on each side by grass. The owners seemed attentive and proactive about upgrading and maintaining the property. They were in the process of converting some remaining all grass sites to gravel pads (actually crushed asphalt). We called the office a short time after our arrival about an electrical problem and the owner was there within 10 minutes to replace the tired circuit breaker.

Size – 4/5
Pull thru sites were long enough for both the rig and the van. Sites were fairly close together and all appeared to be level. 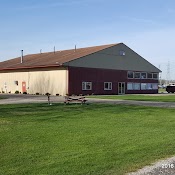 Convenience – 4/5
Located just a few minutes off I-90 and within a 5 minute drive to numerous restaurants, grocery stores and other retail. Not only is it very close to these conveniences, it is also close enough to several RV manufacturers such as Jayco, Entegra, Thor, Forest River, Nexus and Newmar. Other tourist attractions such as the RV Museum, the Shipshewanna flea market, and the Mennehof Museum are within a 15-45 minute drive. Elkhart has a Riverwalk and Island Park among several other attractions.

Peace & Quiet – 2/5
Close to a fairly busy secondary road so some traffic traffic noise is possible. Our site was a good distance from the entrance and we were never bothered by noise. 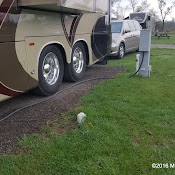 What We Didn’t Like:
– Sites were fairly close together.

Would We Return:
Yes. 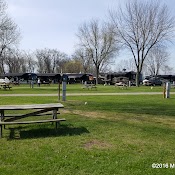 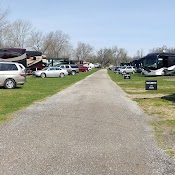 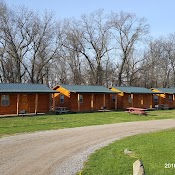 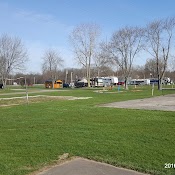 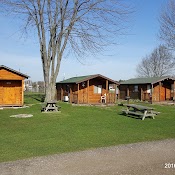 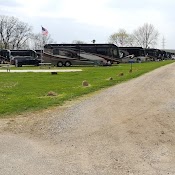