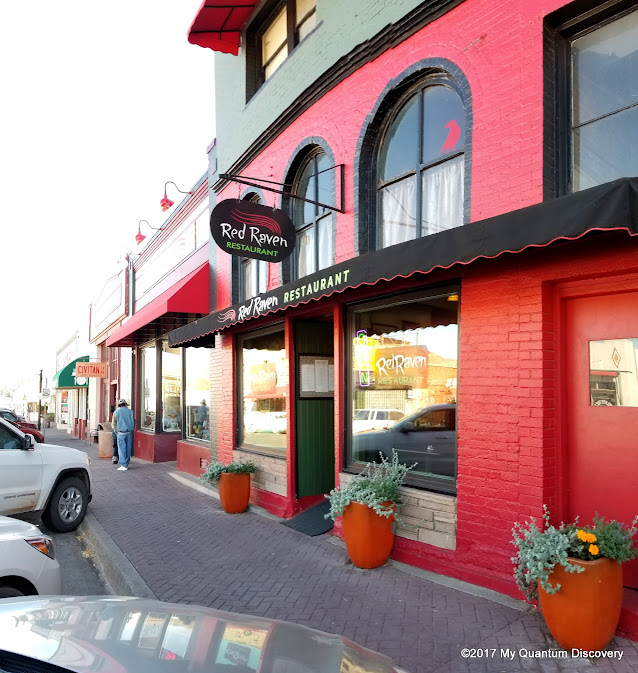 (hard to beat that half price Passport America rate) to regroup and figure out what our future plans would be.

Having been here before (last March for a week and again  before our stay at Grand Canyon Trailer Village), there’s not much to say about this one day stay. We walked down the main 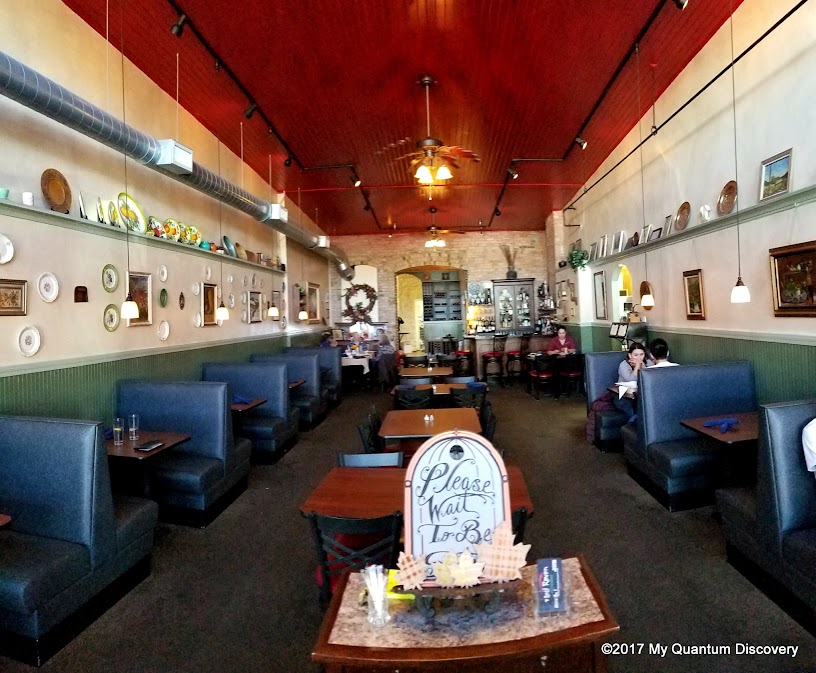 drag, revisiting a few of the Route 66 shops and stopped for lunch at the Red Raven Restaurant. Cute place! A pork tenderloin sandwich ($11) for me. This was a sandwich of charbroiled medallions of pork tenderloin, pineapple cranberry salsa, lettuce, tomato, red onion and herb mayonnaise on a grilled Telera roll with a choice of side (I had onion rings). Rob had the fish & chips ($11) which was Mahi in a light Tempura batter, served with potato wedges, cole slaw and tartar sauce. Both meals were good.

The next day it would be a two hour drive to our next destination, Trade Winds RV Resort in Golden Valley, AZ (review coming) where we planned to stay for one night (but ultimately stayed for three nights). 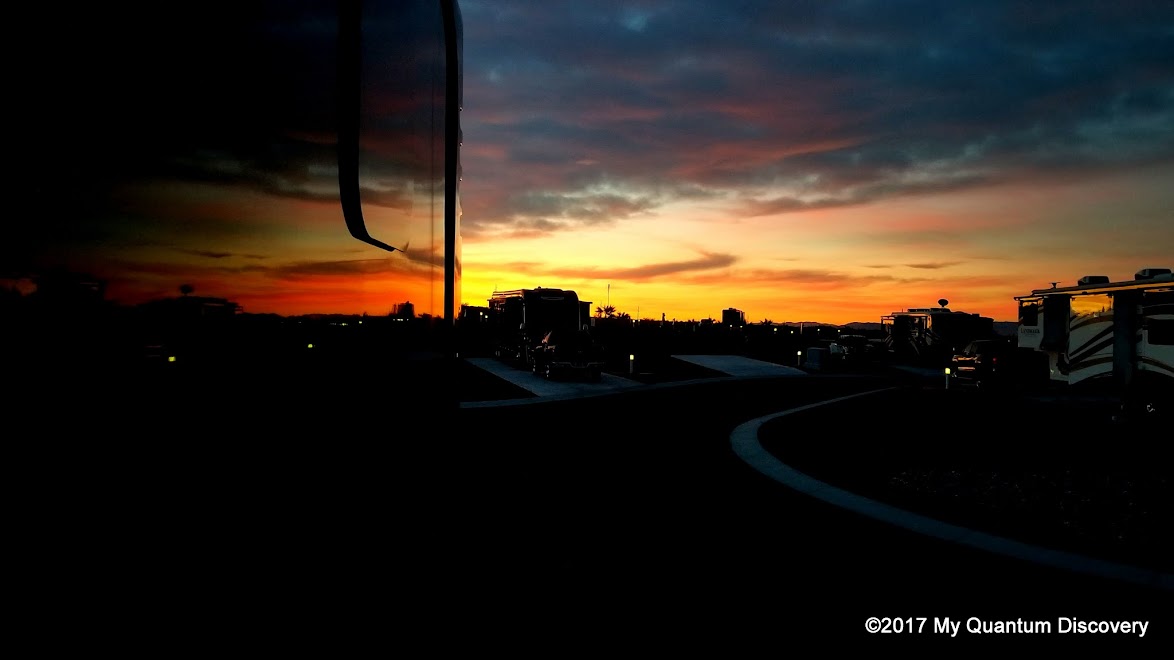 Golden Valley is situated between Kingman, AZ and Bullhead City, AZ on AZ-68 and we spent some time exploring both areas. Bullhead City is on the AZ side of the Colorado River and just a half hour or so away. Just across the river from Bullhead City (and state border) is Laughin, NV. While visiting Bullhead/Laughlin our phones had trouble keeping track of the correct time. Nevada is in the Pacific time zone and Arizona is in the Mountain time zone. However AZ does not observe daylight savings time, so during the summer the time is the same in both cites, but during our visit there was an hour difference.

Laughlin is a mini Las Vegas style city. No great stories of immediate wealth to be told here – we’re not gamblers so we didn’t even set foot in any of them, but if you do like the casino lifestyle you can certainly find it here and it’s probably a lot less congested than Vegas. 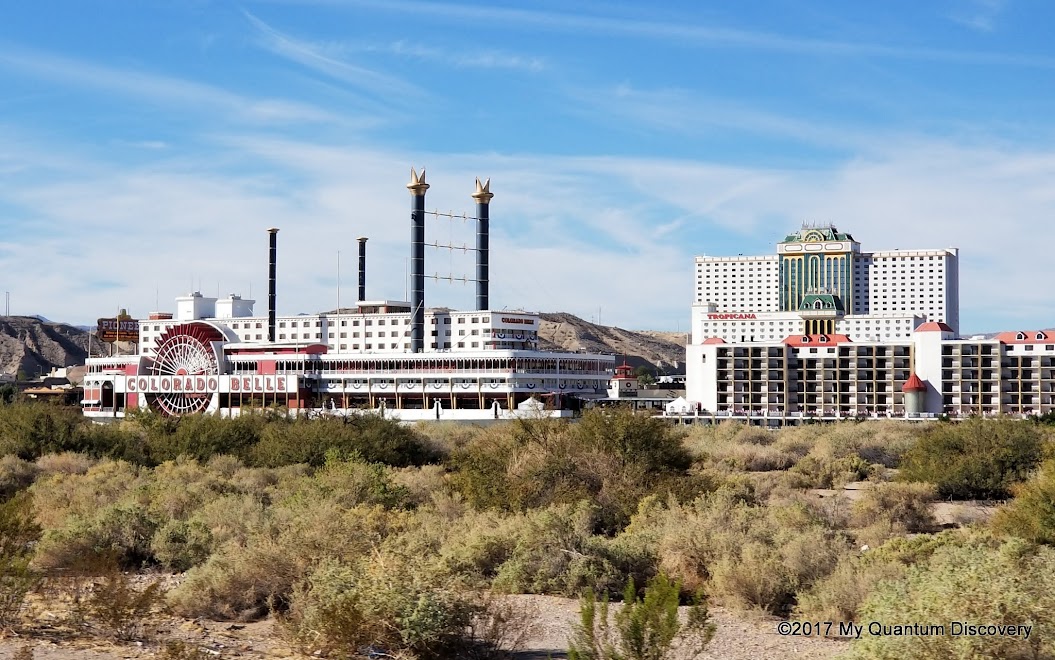 Bullhead City, AZ, is an up and coming residential community with lots of development going on. Apparently the cost of living here is attractive to residents of southern California and other nearby large cities. We were happy to discover a a Black Bear Diner here which has made its way up the list to one of our favorite restaurants (and we are not fans of most chains). Great atmosphere, excellent food, super service 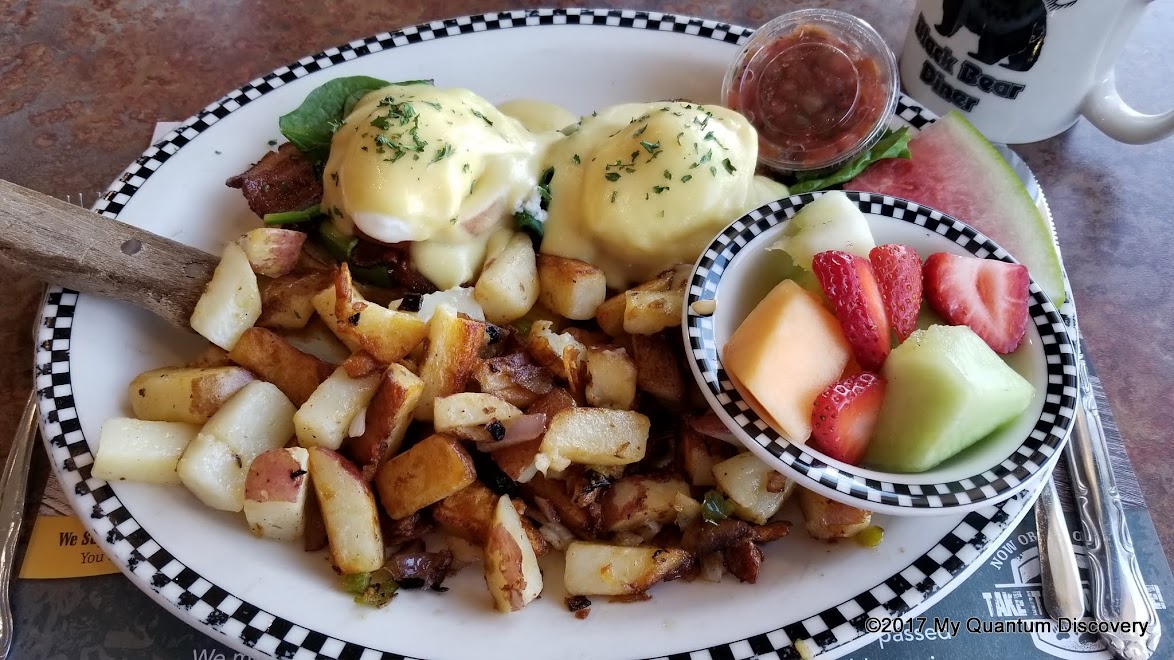 and best of all, they serve breakfast all day (which makes hubby happy)! On this particular visit, I ordered the California Bacon Benedict ($11.49), a split English muffin, thick-cut smoked bacon, avocado, spinach, grilled tomato slices & 2 poached eggs covered in Hollandaise sauce while Rob had eggs with sausage patties. Total deliciousness!
After breakfast, we spent some time checking out RV resorts in the area (Vista Del Sol in Bullhead City had possibilities for a future stay) and looking at models of newly constructed RV port homes. Nice but not ready for that lifestyle change yet so our check book safely stayed in my pocket book! 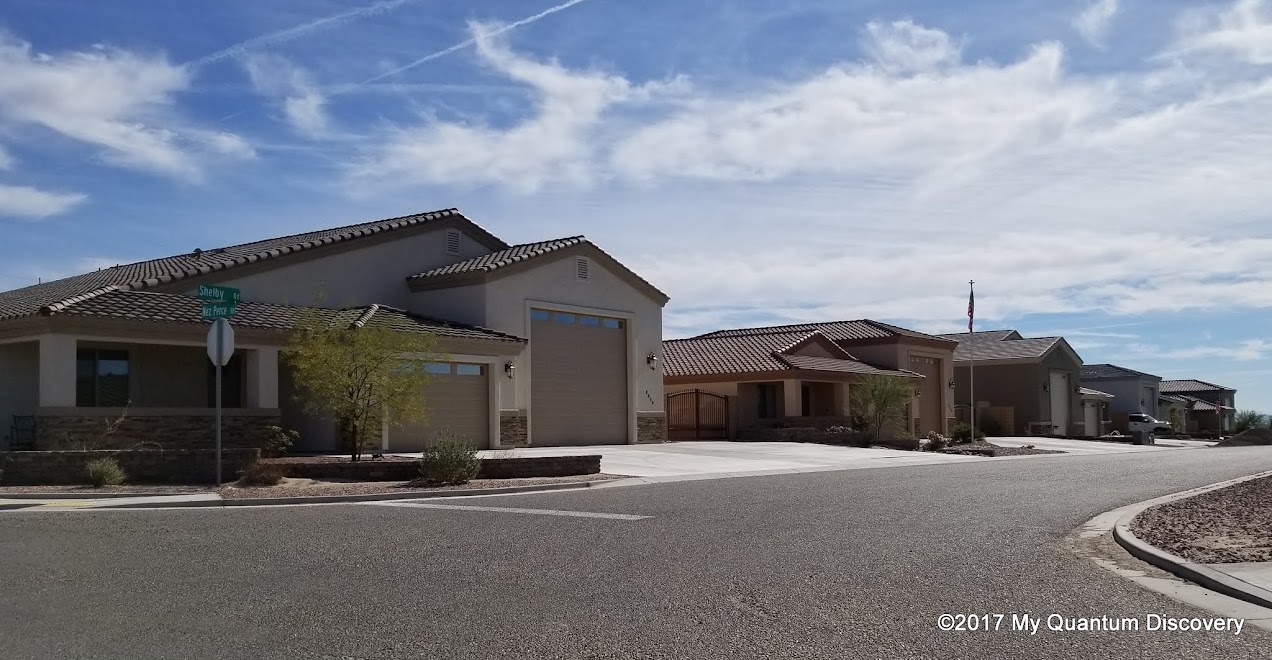 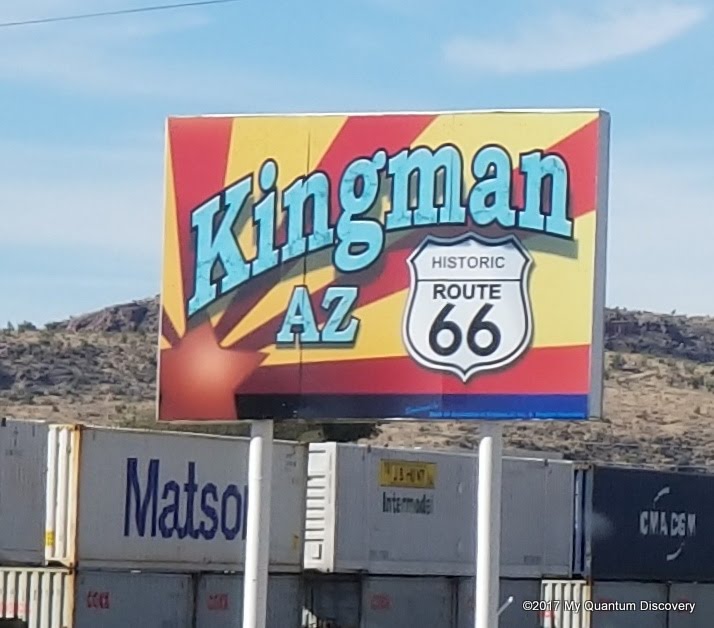 The highlight of our stay though was an excursion to  the quirky town of Oatman, AZ, often described as a “living ghost town”. Of course, silly us, it was a Saturday and we should have known that going to a popular tourist destination on a weekend was not a smart thing to do. But what the heck, we did it anyway!

The route we planned (AZ-68E to US-93S to Oatman Rd aka Historic Route 66) would take us through Kingman, AZ located on the “Mother Road” where we stopped for a hearty breakfast at Calico’s Restaurant. As usual driving on Route 66 is very cool with the old gas stations, motels and road signs from a bygone era.

As we headed west from Kingman, we were surprised when a driver coming towards us started flashing his headlights. Our assumption was that he was warning us about a cop waiting for speeders, but nope, that wasn’t it. Imagine our surprise when we realized that he was warning us that there was a burro walking down the middle of the road up ahead! The wild burro actually changed lanes to be in our path, obviously looking for a handout! But outside of Oatman that practice is  not condoned, so we paid our regrets and continued on. 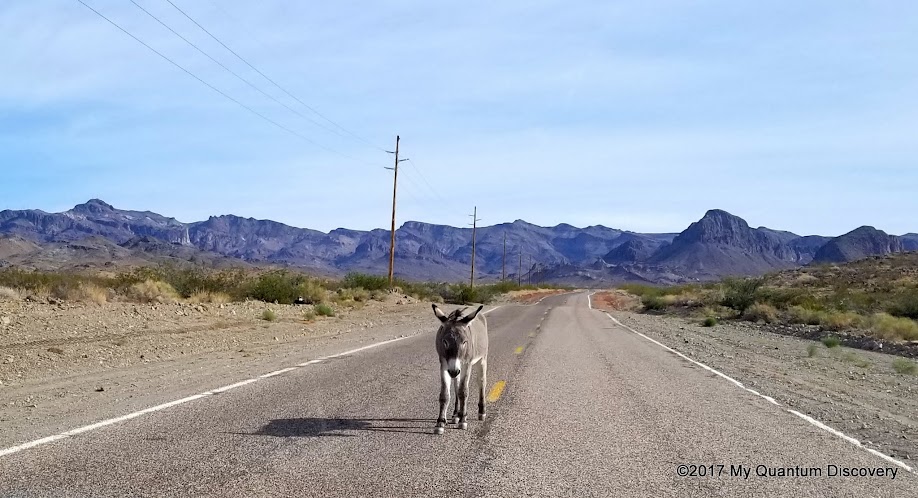 A must see along the way was what once was the historic Cool Springs camp and service station, located about 20 miles from Kingman, which has a fascinating history. Built in the mid-1920’s, weary motorists travelling along Route 66 (once called the Old Trails Highway) would stop here to check their oil and water, gas up, maybe grab a bite to eat or just rest a bit. But like so many other places, when Route 66 declined, so did Cool Springs Station.

Cool Springs also boasts Hollywood credentials, its ruins were blown up for the 1991 Dolph Lundgren/Jean-Claude Van Damme film Universal Soldier. In 2001 it was bought by a couple who, along with their partner, totally rebuilt it to look exactly how it did back in the 1920’s. It later became one of several Route 66 locations that inspired Radiator Springs in the Disney Cars movies. Don’t plan on filling up your tank here though – today it is a museum as well as a gift shop offering Route 66 souvenirs and one of a kind Cool Springs memorabilia. I must say Cool Springs Station was very cool! 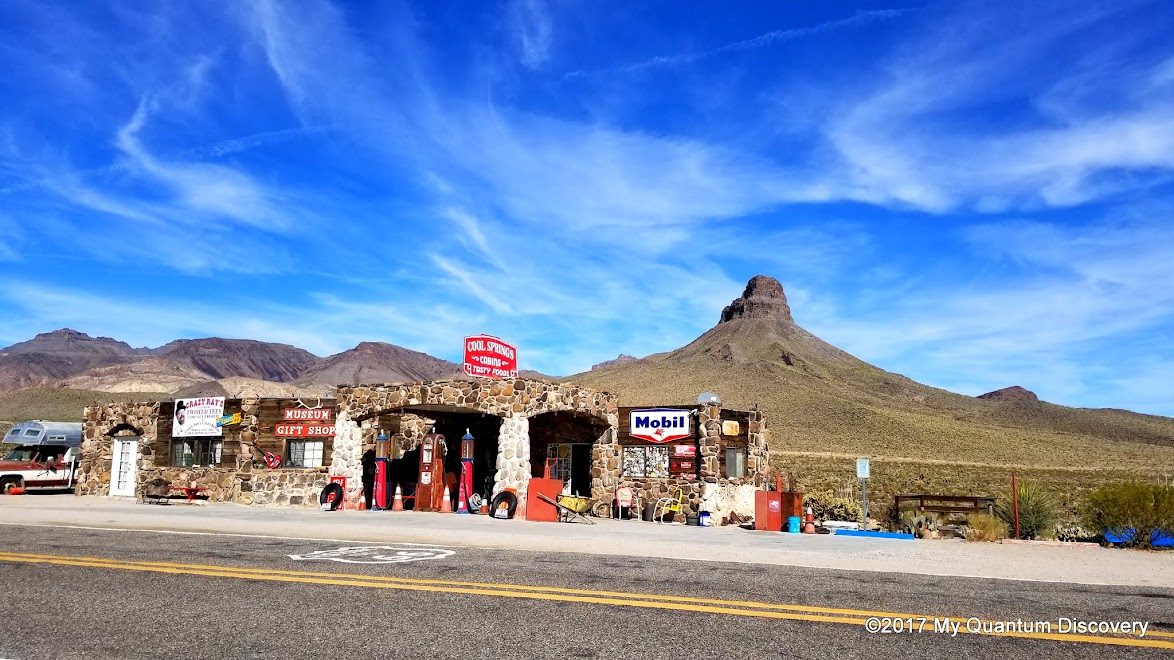 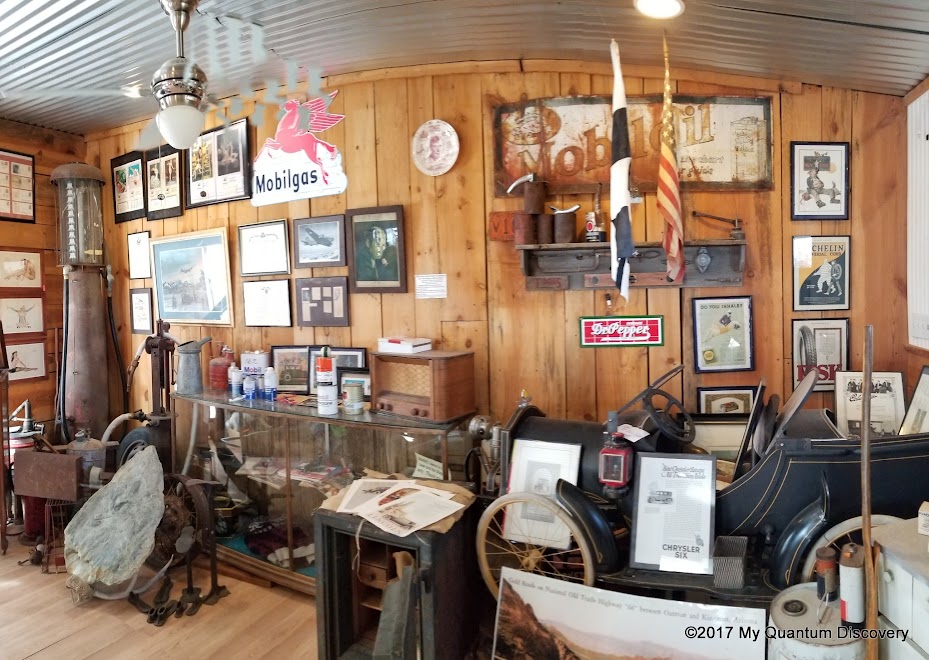 Cool Springs apparently wasn’t the only oasis in this harsh desert landscape back in the 1920’s. Lowell “Ed” Edgerton, a gold prospector, decided that serving the Route 66 motorists would be more profitable, cleaner and a lot less work than digging in the dirt for gold. So in 1920, he opened Ed’s Camp, offering food at the Kactus Kafe, a trading post, a trailer park, gas, repairs, restrooms and cooling water for their radiators. No tent or trailer? Then the tired motorist had two options – sleep in their car parked on his property or sleep on a cot in his screened porch. Whichever they chose, the cost was the same, $1.00 (probably a lot of money back in those days). Don’t want to camp or sleep? Then they were charged for each bucket of water. If a rock hunter wanted to search for precious stones on his land, it’s no surprise that he would charge for that as well! 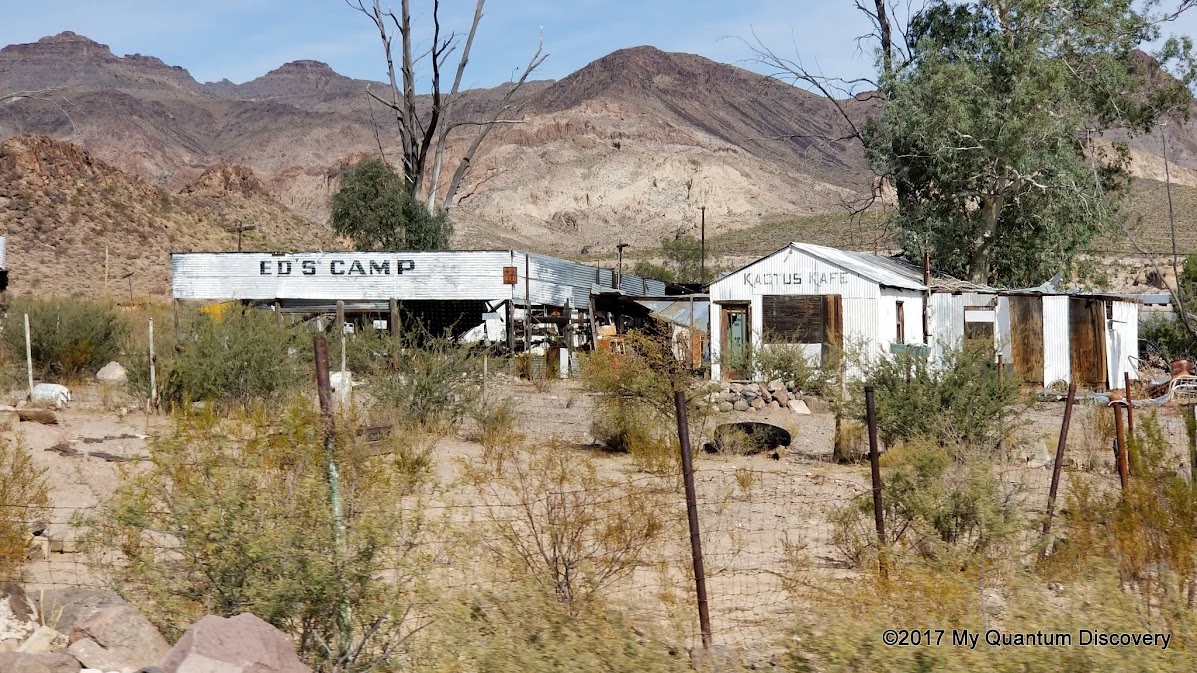 In 1952, a rerouting of the road took most of the traffic and almost all of his business elsewhere. Despite this, Ed’s Camp remained open for business until his death in 1978. Maybe some day, similar to Cool Springs Station, someone will purchase the property and restore Ed’s Camp. In the meantime, it will slowly merge back into the landscape.

After Ed’s Camp, Route 66 (aka Oatman Road) turned into a very intimidating, very windy two lane road with hairpin turns, sharp drop offs and steep grades as it made it’s way over the harsh yet breathtaking desert terrain of the Black Mountains. Gulp! Definitely not a big rig friendly road! With no guard rails, all I did was hope and pray that anyone travelling in the opposite direction wouldn’t accidentally meander into our lane or that a burro didn’t decide to cross the road as we came around a curve!  A rusty skeleton of an old car at the bottom of a steep hill that apparently missed the curve was a powerful reminder of what could happen! 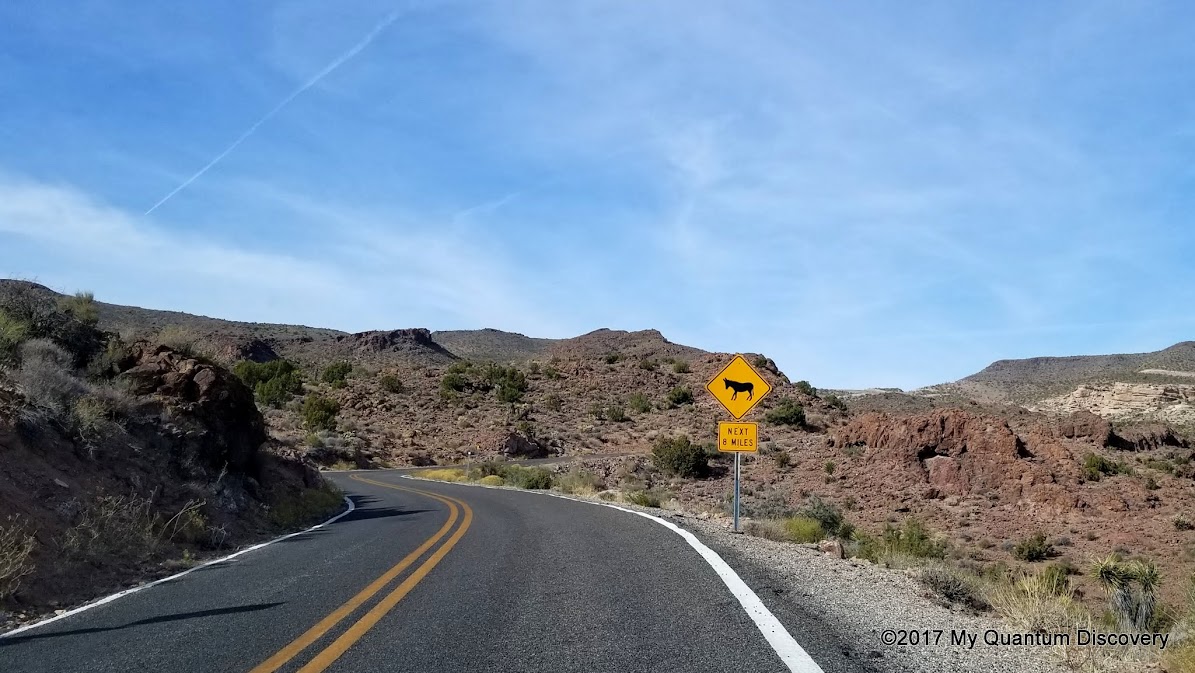 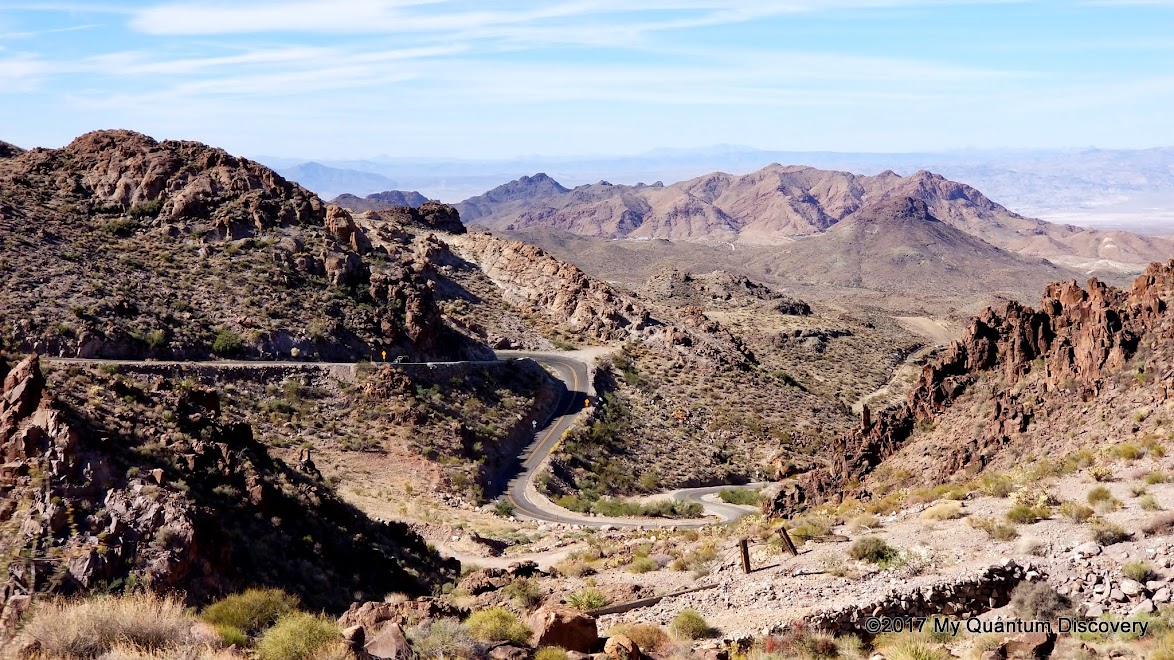 From there, the road climbs Sitgreaves Pass which has an elevation of 3550 feet above sea level, making it the highest point on Route 66 and offering views of three states – Arizona, California and Nevada. We thought that this was just an overlook but as we walked around we noticed crosses and grave markers. We later learned that the grave markers are actually memorials to deceased people whose cremains are scattered at the site. 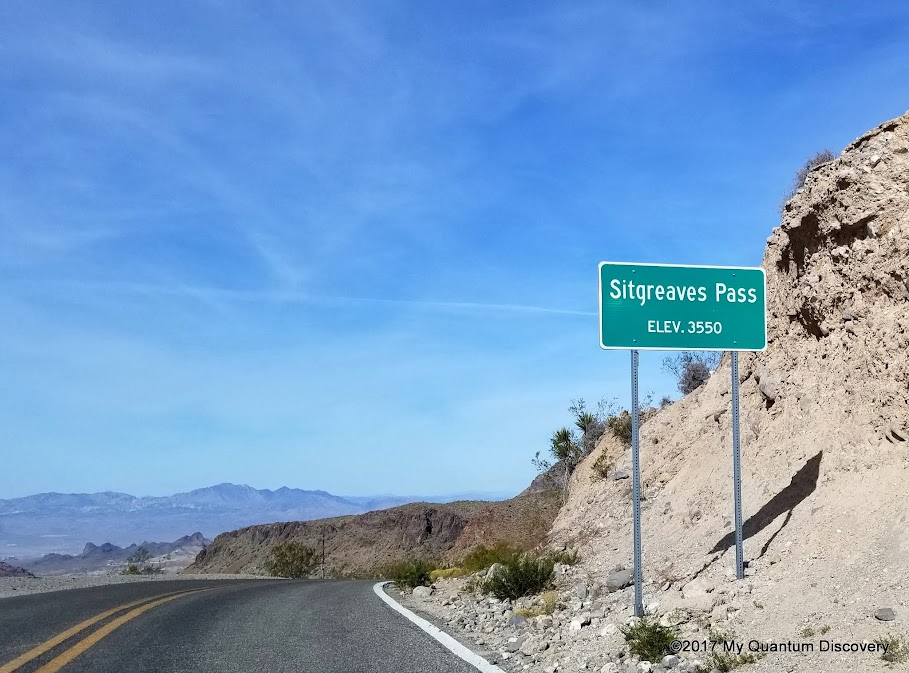 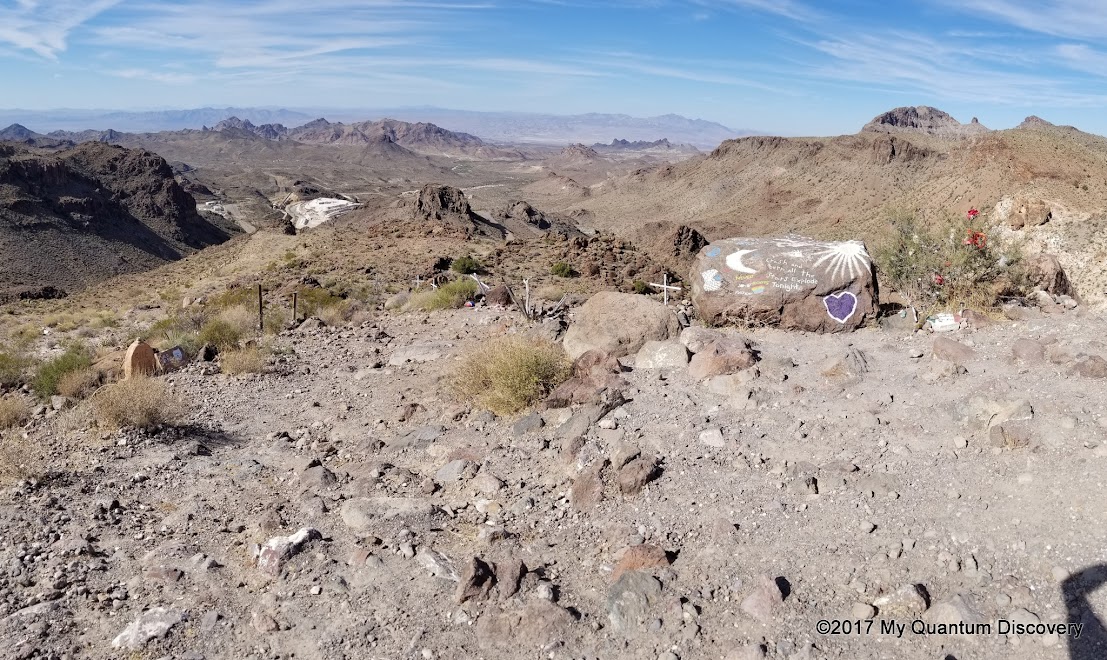 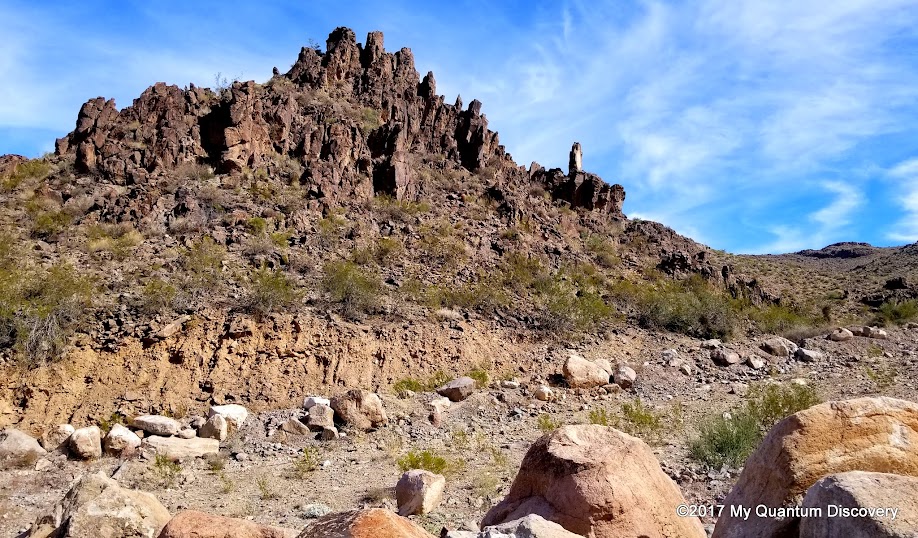 Back on the road again, we continued to Oatman which was only another four miles or so. What did I say about it not being a smart move going here on a weekend? Yep between the people and the burros roaming in the street it sure was a little crazy! Because of the very limited parking, it took us a while to find a place to park. There’s a lot more to say about this historic town but we’ll save that for our next post! 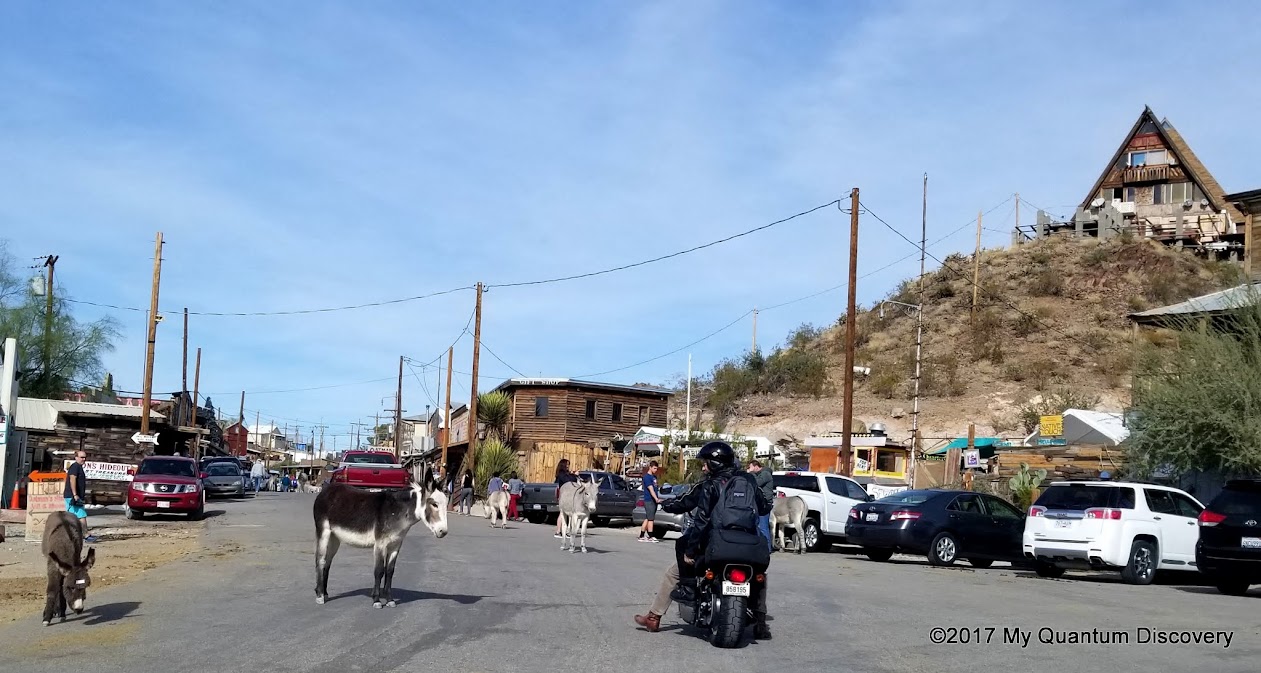