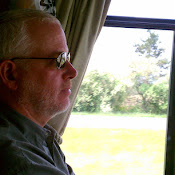 Heading back to MA isn’t half as exciting as heading south, especially knowing that we have a lot of work ahead of us getting the boat ready for launch and the house ready to be put on the market.  Also Rob has some VoltDoctor clients waiting for his expertise. The best part is that it will be good to see family and friends. Even though we’ve had lots and lots of fun, we’ve missed everyone!

We seem to be having difficulty getting ourselves ready to depart in the morning and on Thursday, May 3rd, it was no exception.  Knowing we might not have any hookups for the next few days, one thing that slowed us down was a last minute load of laundry and waiting for the wash cycle to finish before we disconnected the sewer.  Once that was done, Rob wanted to fill the water tanks – the water pressure at West Branch State Park left much to be desired so it took forever.

The Buffalo, NY area was about our preferred 3-4 hour drive away and we had looked for campgrounds there but couldn’t find any that were open, looked decent and didn’t cost a small fortune (sites were $40 and up in the Niagara Falls area), so we decided that we would just dry camp in a parking lot somewhere. Given that there is usually not much to see or do in a parking lot, there was no point getting there too early, so we tentatively targeted Rochester NY as our destination for the day. 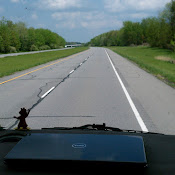 So it was close to 11:30 a.m. by the time we pulled out of our campsite at West Branch. Yesterday when we saw that awful bridge we knew we weren’t going to risk going over it.  Too bad, because within 5 minutes we would have been able to jump on SR5 (the shortest route to SR11 north) , but instead we had to head south (the wrong direction) and follow the same awful road we came in on.

Rather than head back up to SR5 though, we decided to just stay on I-76 heading east towards Youngstown.  In Youngstown, we picked up SR11 and began making our way north towards I-90.  As mentioned in a previous post, traveling on I-76 to get to Ravenna from St. Marys wasn’t very enjoyable but this stretch of I-76 was in much better shape. And also like the last leg, it was pretty monotonous – trees, trees and more trees! Even though I had only been awake for a few hours, I soon became bobblehead Linda and started to doze!  What is it about the sun shining through the front windows, the monotony of the scenery and the motion of the vehicle that makes you just have to nod off?  Good thing I wasn’t driving! 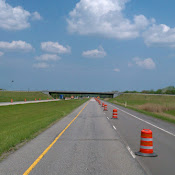 We were pleasantly surprised with SR11 – it was a four lane divided highway with a smooth surface.  Yippee!  Our excitement was short lived though – the surface remained smooth but the last 15 miles of this 45 mile stretch was reduced to one lane due to construction. Lovely orange/white barrels bordered what appeared to be a newly resurfaced lane.  Interestingly, there was the same setup on the south bound side as well.  We went by miles and miles of barrels with no sign of anyone 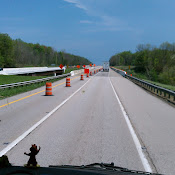 working on the road – what’s with that?

I was tired of counting the number of bugs spattered in pretty patterns all over the windshield, so to amuse myself at mile marker 89 I shifted my attention to counting the barrels to see how many there were in a mile.

At MM90, I had counted 74 barrels – yes, that’s right, in one mile, there were 74 barrels – that’s one about every 70′. We must have driven over 10 miles in this construction zone so that’s at least 740 barrels on the northbound side and probably just as many on the southbound side. Oh yeah, we did finally see a few workers at different intervals along the way. Hmmm, I wonder how much those barrels cost? I guess this is our tax dollars at work! Maybe we should start a barrel business – maybe offer them in various colors and patterns?

About 5 miles from the exit that would connect us to I-90 east, the construction on SR-11 ended.  But we no sooner started driving on I-90 when there were more constructions signs.  No barrels this time – just jersey barriers.  Rob asked if I was going to count how many barriers there were in a mile.  Nope, counting barrels was enough counting for me! This construction went on throughout Ohio and until we hit the PA border where it finally ended! 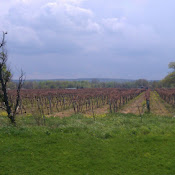 As we drove along, the scenery changed slightly, instead of trees, there were a lot of grapevines along the highway.  Ah, how good a glass of local wine would have tasted!  And then more excitement as we approached Erie, PA, we had another severe t-storm warning so I was once again watching the radar on my phone to make sure we didn’t run smack dab into it.  Luckily we missed it or it missed us!

After crossing the border into NY, we finally stopped at a rest area where we bought a burger at McDonald’s.  UGH, McD’s is our least favorite fast food joint but it was after 3 p.m. and we were hungry so it had to do.  I had called Camping World in Rochester and they allowed overnight parking but did not provide any hookups (not a big deal) and the WalMart there didn’t allow overnight parking.

So while Rob originally figured we’d get at least as far as Rochester, by now he was getting tired of driving and it was getting late so we decided to shorten our day. We once again 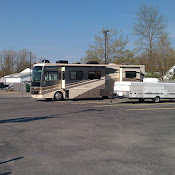 considered a campground but we still couldn’t find anything reasonable in the area. 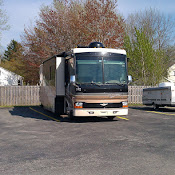 actually had water and electric hookups free of charge. A dump station is provided as well. Woohoo! So we ended up at this very nice, relatively new Camping World with a Subway, a Pizza Hut, and Arby’s next door plus a Diner across the street – what more could anybody want!

While we were there, Rob returned an item that we didn’t need and we bought another outdoor reversible mat that was on sale.  Overall a worthwhile stop – and the price was right!

Although we could have stopped anywhere and run our generator as needed, it was nice having free water and electric. It was 84 degrees and fairly humid, plus being on blacktop in the parking lot made it feel even warmer so it was good being able to have the AC going, at least until the sun went down and things cooled off.

This is the second Camping World we have encountered that provided hookups for overnight parking – the other one we know of is in Roberstdale, AL just north of Foley/Gulf Shores.