On Monday and Tuesday of last week (April 8th and 9th) while spreading 6 yards of pine bark mulch in the garden areas in the bright sun and painting the well house, yours truly was already whining that it was too hot (guess my 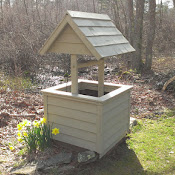 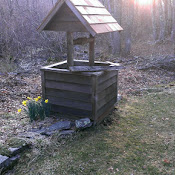 But of course as our luck would have it the local weather gurus had forecast that the day we were to drive to Albany to bring the Entegra home, Friday, April 12th, would be cold, raw, rainy with the possibility of sleet and freezing rain in the Berkshires!  Oh, please, not again!!!

Figuring that I might want to change our plans, Rob took matters into his own hands on Thursday and sent an email to Laura, our sales person stating; “someone is sitting next to me chewing off my ear about rain and cold and 25 knot winds (and yes even snow up in the Berkshires according to the Boston forecast) and “why do we have such crappy weather every time we go to Albany?” blah, blah , blah. And “it won’t be any fun doing our demo in such horrible weather” blah, blah blah and “I might get my hair wet”, blah blah blah.”  Our chuckling sales person called within a few minutes assuring us that our demo would take place inside.  Whew, the trip was on!

The heavy snows had done a real number on the trees this winter. So on Tuesday and Wednesday (April 9th and 10th) in prep for driving the new coach down the first 0.2 miles of our lane to get to our driveway, we decided that some of the branches overhanging the road and along the sides needed pruning, otherwise our new coach would get some new scratches.

Kind of funny that we have lived here for 16 years but had never met some of our neighbors.  Well, while we were doing the trimming, we met, Regina who was walking her dog and then, Mike, her son, who lives across the street from us.  That may sound odd but the houses are spaced so far apart and are set so far back from the road, it isn’t conducive to neighborly chats.

During our conversation, it was arranged that Mike who has an outdoor wood fired boiler would come over on Thursday afternoon to remove some felled tree logs as well as some of the fallen limbs that are strewn along the edge of our yard. This is a win win situation – he’ll get lots of wood to burn and we’ll get our yard cleaned up!

Thursday, April 11th, ended up being a very busy day.  Rob’s Mom had her surgery on Thursday, April 4th and was still in the hospital so we drove to the hospital in Providence for a quick visit in the early afternoon.  Her recovery has been slow due to her breathing issues but she moved to a rehab center April 15th where she’ll stay for another week or so.

Unfortunately as a result of all the pruning that we did, Rob ended up with poison ivy (or poison oak) on his right forearm.  Whatever it was, it was pretty nasty! On our way home, we went to the Minute Clinic at our local CVS.  He’s had it before but never bad enough to require a doctor’s visit – usually I’m the one covered with it. He was given a prescription for prednisone but it still took about a week to get it past the bubbly/oozy stage.

Our appointment at Albany RV was at 10 a.m. Friday morning. Since we didn’t know how long the demo would take and we didn’t want to drive the new coach in the dark down our spooky dirt lane, we decided that we would plan on “camping” at the dealership on Friday night.  That would also give us an opportunity to check out many of the systems to make sure everything was functioning properly.  So on Thursday night, we sorted through the multitude of boxes from our previous beast, taking out those supplies (sheets, pillows, towels, etc.) that would be necessary for an overnight stay.

Finally our day was done – it was an early night since we had to be up at 5 a.m.  We had been so busy all day that we didn’t have any time to get excited, knowing that on Friday, the Aspire would belong to us.  But how that would change……