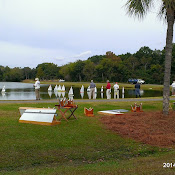 We’ve been at James Island County Park now since Monday (Nov 3) and never did our errands on Tuesday, so that was the first order of business on Wednesday (Nov 5th). After a quick breakfast at the coach, we headed out to Walmart and Publix. Once that drudgery was over, it was time to head back to the campground to have some fun. Guess some other people had the same idea – there was a regatta of small model sailboats on the lake being controlled remotely by a group of enthusiasts on shore. That was pretty cool! 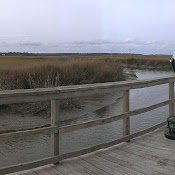 After putting our groceries away, we hopped on our bikes, heading for one of the bike trails. There are three trails that loop around the park. The orange trail winds it’s way through the woods and around the lake and is 1.3 miles long, the 1.6 miles long blue trail passes by Edisto Hall (rental facility which seats up to 200 people) and the Splash Center as well as wooded areas and the 1.4 mile green trail circles around the Spray and Play area, several picnic shelters and the crabbing and fishing dock. All the paths are paved, pretty easy riding and wide enough for two way bike/walking traffic. It was neat seeing the hundreds of the holiday displays (but mostly not lighted at this time) as we rode along. 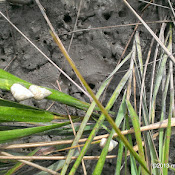 When we arrived at the crabbing and fishing dock, we walked out on the pier, stopping to watch the tiny fiddler crabs scurrying across the mud. Fascinating watching them.

There was a family out on the dock, fishing and crabbing, using chicken for bait. They didn’t catch anything while we were there but hopefully eventually they did. Now I can see why everyone raves about this Park! 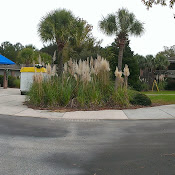 On our way back to the campground, we stopped to take some pictures of the gift shop and started talking to one of the staff 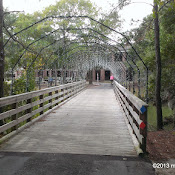 members, asking him about the Festival of Lights. He told us that there are 3 employees who are dedicated full time year round to the planning, decorating and maintenance for the Festival of Lights. On top of that, other park staffers and an army of volunteers help out during the holiday season. He went on to comment that he would be really glad when it was all done and over.

With over 700 displays and 2 million lights, setting up the displays usually starts in August – how daunting that must be! 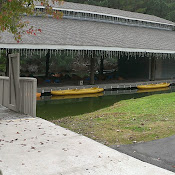 When I mentioned that we wouldn’t be there for the opening (Nov 14th), he indicated that they would be testing everything either this night or on Thursday night. How awesome that will be – to be able to see the lights without all the crowds! 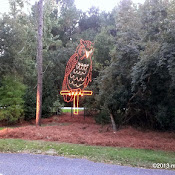 After our bike ride, we returned to our coach. There were a few displays that were now lit so we took a walk to see those. In fact, there were displays along the parkway right behind our site that were lit. There were several staff members examining each 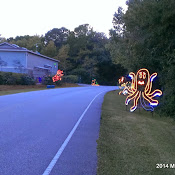 display, writing down which bulbs were out or which sequencers were not working. Wow what a job that must be! As it turned out the full dress rehearsal would be the next night.

As we walked back to the coach, we stopped by to say hi to Nancy and Gary who invited us to stay for a glass of wine. Gary plays guitar and banjo and carries at least 5 instruments aboard their rig (a 32′ 5th wheel). Both love Blue Grass music so they attend a lot of Blue Grass Festivals when they are on the road. In the photo below the guitar leaning against the sofa was hand made by Gary. 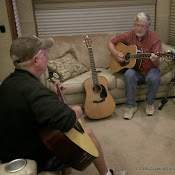 The other two are Martin’s.

Rob used to play guitar but hasn’t for many years (decades?) – his guitar is currently in storage back in RI. I was surprised when he started strumming along with Gary inside the 5th wheel. Afterwards Rob was commenting that he wished he had his guitar so he could start practicing again. Gary helped him to review all the basic chord patterns and he was surprised he was able to recall most of them. Great to have an experienced teacher! His fingers were pretty sore afterwards though, it would take a while to build up those finger tip calluses again. Fun evening!

It was after 9:00 p.m. by the time we returned to our coach – we hadn’t had supper yet so we had a quick sandwich, then settled in for what was left of the evening. Next we’ll be heading into Charleston!