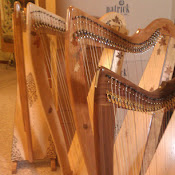 On Wednesday, April 25th, we went back to downtown Rising Sun and decided to try breakfast at the Main Street Diner.

The diner is a very small place with about 8 tables.  When we walked in, we were greeted by a man, who we later found out was the owner, Mike.

When he asked what we 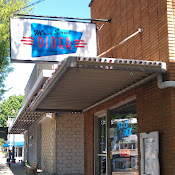 wanted to drink, we replied with our usual response “decaf”.  He then told us he only had cold pressed all natural coffee, no decaf – we decided to give that a try. 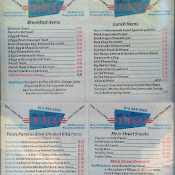 and he only charges $1.00 even with refills!

It was a fairly limited menu so we both ordered bacon & cheese omelets. We asked for wheat toast but they only served potato bread.  Definitely not a fancy place – the omelets were served on paper plates, the coffee in paper cups and we were given plastic “silverware” but the food was very good and the service was excellent.  Between Mike and Sarah (the waitress), we were given lots of attention. 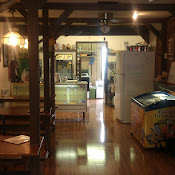 After breakfast we spent about an hour chatting with Mike, learning that he had retired several years ago (not sure what he did before),  had bought the diner which he considered his “hobby” and was an RV’er.

He doesn’t care about making money – he just wants to break even. In the window in the front is a neon sign for Tina’s Bar-B-Que so we asked him about that.  Apparently he buys pulled pork,  beef brisket and ribs from Tina in Carrollton, KY (about an hour away) who is well known in these parts for her bar-b-que.

The word is that Tina’s bar-b-que is as good as any you can get in Memphis! He adds his own sauce and serves it for lunch or dinner with a choice of sides – homemade cole slaw (which he mixes per order), baked beans or potato salad and Texas toast. You can either eat there or take out as a meal in bulk. Yummy, it sure sounded good.  During town events, he sets up tables outside on the sidewalk and serves bar-b-que as well as hot dogs, hamburgers, etc. He’s in the process of expanding by adding an outdoor courtyard behind the diner.  In the warm weather he has a pontoon boat which he stocks with bar-b-que and sells to other boaters. Nice guy, it was interesting talking to him.  I’m hoping before we leave, we’ll get to try some! 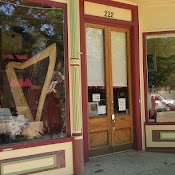 On Tuesday, when we walked around town, we had passed by the Wm. Rees Harp Company 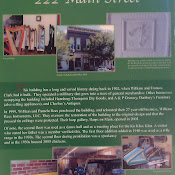 but it was closed until Wednesday.  I had read a little bit  about this place and knew that you could watch them making the hand made harps. Since we were practically next door we went in.

We entered the store and were greeted by a woman, Darlene who is not only the store manager but a harpist as well.  We explained that we knew nothing about harps but were interested in seeing how  they were made.  She explained that they have both Concert Lever Harps as well as Harpsicle Harps. 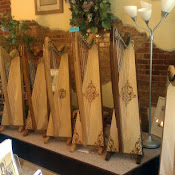 The concert harps have 34 strings, are 50″ tall, have 4.75 octaves and weigh 18 to 21 pounds. These can be made from cherry, maple or walnut woods and can have two types of  ornamentation: fretwork overlay (done by wood burning or using contrasting woods) or hand painted with the colors you specify. 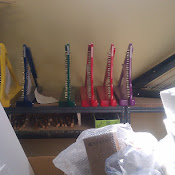 Harpsicles are smaller with 33 strings, are 43″ tall, have 4.5 octaves and weigh 11 pounds and come in assorted colors. Because of their small size, they are often used by beginners, used in classrooms and by therapists but many professionals use them as a travel harp due to their portability. 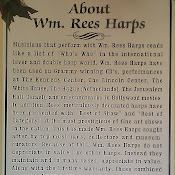 A little background about the company – the owner, William Rees, has  been making harps since 1972.  William is an accomplished, award-winning mufti-instrumentalist who has been playing professionally and teaching since 1970.

Originally located in California, he eventually decided to move his business and his family to the mid West (Rising Sun) where his harps were very popular. Their harps have been played at the Kennedy Center, the Lincoln Center, the White House, in movie soundtracks, and in Grammy award winning albums. 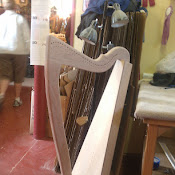 and several sons, amazingly they produce about 8 – 10 harps per day and ship all over the world, with a large number going to China.  When we asked how long it took to make a harp, she couldn’t answer because they make all the pieces separately and then eventually put them together to make the final product. 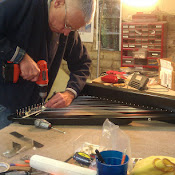 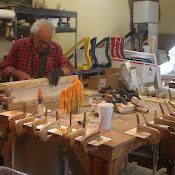 in a harpsicle and then stringing the instrument (photo on the left). In another area, another employee was gluing and clamping the boxes together.

For safety reasons, we weren’t allowed to go into their back room which was the woodworking shop but we could 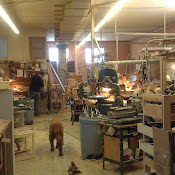 stand and watch what they were doing.

Who would have thought that this type of business existed on Main Street in the little town of Rising Sun!  What a fascinating and wonderful example of a handmade, quality product but best of all, it is made in the USA! 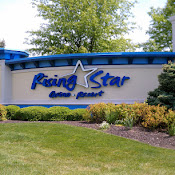 Our day wasn’t over yet! Since our original plan was to leave on Thursday morning, we were in our 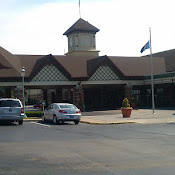 usual “let’s cram all that we can into one day” mode so we wanted to check  out another flourishing business, the local casino. The Rising Star Casino & Resort is located on the riverbanks, just a bit east of downtown. 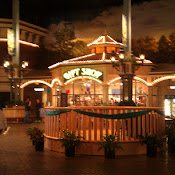 The casino has over 1300 slot machines plus a wide variety of table games, 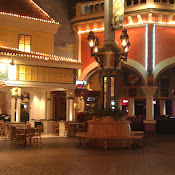 a 1140 seat theater where many  of the top names appear (on May 5th, Chubby Checker will be performing), a pub and a pavilion, both of which feature nightly entertainment and 4 dining options.   The resort has 190  rooms and suites, an indoor pool, a hot tub and a spa. And if you still don’t have enough to do, there is a 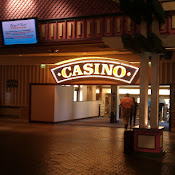 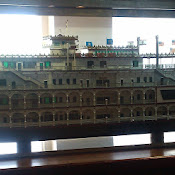 It wasn’t real crowded but it was still busy.

Since this was a weekday, the clientele was made up of mostly retirees, some with walkers, some in wheel chairs.  Quite a few smokers. Not being gamblers and not being big spenders, we found a few empty penny slots and started playing.

Woo hoo….I won 2¢…Rob won 5¢… and so it went!  I finally hit it big though – I won 50¢.  But as we won, we fed our winnings back into the slots so in no time we were down to zero! Maybe if we moved to a luckier slot machine, the results would be different – yeah, right!  We moved, we lost, we left! Oh well, it just wasn’t our lucky day and we were out a big whopping $3! It was still fun though!

Back at the ranch, we sat outside for a bit.  It had been very windy and a little chilly here (temps at night in the high 30’s) but with the bright sun it was comfortable.  While we were chillin’ watching the barge and boat traffic, a couple from two or three sites down were walking their dog and stopped to chat with us.  We invited them to join us for a beer which they did after they finished walking their dog.

Nice couple, Bill and Colleen, originally from Indiana who have been full timers in their 5th wheel for the past 6 – 7 years.  But their full timing days are over as they have built a house in Tennessee so they’ll just be using their 5th wheel for short trips.   They left around 6:00 p.m.

Severe storms were forecast for that night for Cincinnati and the surrounding area. The usual lovely, very colorful green, orange, yellow and purple blob was appearing on the radar on our phones.  On TV, there were warnings for torrential downpours, lightning, golf ball size hail and possible tornadoes (oh no, not again) for most of the night. That combined with the hard freeze alerts in Decatur, IN (our next stop) made us reconsider our departure for the next day – especially if we could stay at our existing site.

Actually we ended up on the fringe of the storm so we had rain and could see lightning off in the distance but no hail or tornadoes so it wasn’t that bad. But it appeared that we would have more bad weather beginning on Friday into the weekend.

The next morning we headed up to the office to see if we could stay through Sunday. There was no sense in our racing to our next stop since the Fleetwood factory tours are only given on M-F.  We were lucky – the people who had reserved our site for the weekend had cancelled so it was available and we didn’t need to move. 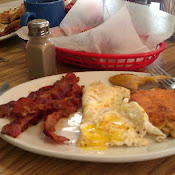 I’m appending here what we did over the next few days – not much to write about so certainly not worth separate posts.  On Thursday, we did some errands in Aurora, stopping at Gail’s Kitchen for 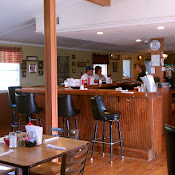 breakfast and making our usual trip to WalMart but didn’t do much else.

Bill and Colleen, our friendly neighbors, told us that they were planning on building a fire that night and if we wanted to,  come on over. It ended up being too cold and windy for a fire that night so that plan was cancelled.

Friday was a lovely day, warmer than it had been since we first got here. It was the first day that it wasn’t excessively windy so it was quite pleasant outside.  We didn’t do much that day except to work on our blogs and then sit outside in the afternoon.

Another coach arrived next to us – they have the most adorable puppy so I went out to talk to them.  The puppy which is a Shih Tzu is 9 weeks old and named of all things, Chooey (short for Chewbaka – does that sound familiar?).  They are from Cincinnati and came here to go to their grandson’s Little League Opening Day parade in a nearby town.  We talked to them for a bit until AAA arrived to rescue them – they had locked themselves out of their car.

Since it was a pretty nice day with no wind, we decided to buy some firewood at the office. They don’t allow the use of imported wood due to infestation issues so Rob bought 10 logs for $9.00 which they would deliver. Just as our wood arrived, Bill beckoned us over to share their campfire.  We met their son and daugter-in-law, Bill Jr. and Colleen and their 15 month old daughter, Olivia. Lots of laughs! Around 9:15 p.m., we returned back to our hacienda. Later that night, we had a severe thunderstorm – the noise of it woke us up in the middle of the night.

On Saturday, despite the threat of more severe t-storms, we went back to Jack’s Place for breakfast, then went to Kroger in Aurora to stock up on groceries since we weren’t sure what would be available at our next destination. While we were in Kroger there was a heavy downpour but luckily it had mostly stopped by the time we came out. Most of the day was dreary and that night another green, orange, yellow and purple blob is headed our way so there was another severe storm warning in our area.  UGH!   Once again, it didn’t turn out that severe.

Since this was our last day here, we went back to the Main Street Diner to get some take out for supper that night.  Beef brisket, home cooked baked beans, home made potato salad and cole slaw.  Everything was really good although we both would have preferred a little less sauce on the brisket.

Now (Sunday morning) we’re getting ready to depart.  Except for the severe storms, it has been a very relaxing and enjoyable few days! We definitely like the campground and the area and wouldn’t hesitate to return!