On the road, discovering new places, taking tours or exploring on our own, we are always interested in learning the history of the cities and towns we visit during our travels. Whether in an RV or on a fly/drive trip, discovering new places and taking in new cultures is always lots of fun and can be very educational for anyone.

But if you are like us, you’ve probably ignored whatever history there is in your own back yard. Yes, we’ve been to the Aquarium in Boston, the Museum of Science, the Museum of Fine Arts and even took a Boston Duck Tour when our dear friends from England came to visit. But have we ever really explored all the wonderful history in Boston? Have we ever walked the Freedom Trail or been to the Old North Church? No. Have we ever taken a tour of Providence, RI or Salem, MA? No. Have we ever visited all the Newport mansions? Have we ever…..well, you get my gist! Can’t say that we deliberately avoided these outings. No good excuse, just caught up in our jobs or the day to day chores of everyday life and since they are so close by, “maybe next week” is an easy out.

But this summer, on a much less grandiose scale than exploring Boston, we did find the time and we did make the effort to discover the history surrounding us in the small town of East Greenwich, RI. Being a native RI’er and growing up in the area, Rob’s summers were spent in East Greenwich, sailing on Narragansett Bay. Moi, being from Massachusetts, wasn’t familiar with the area or the town or even the state until Rob and I started dating back in 1985. Since then however I’ve spent considerable time in this charming town. Our corporate jobs, traveling to other places and just plain being busy prohibited us from delving into the rich history here. 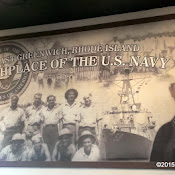 So what finally motivated us to finally explore our own backyard? We have often wondered about the historical plaques in many of the buildings here, some dating as far back as the 1600’s. But perhaps it was seeing the large mural at Dave’s Market, a local grocery store, indicating that East Greenwich was the “Birthplace of the U.S. Navy” that really piqued our interest. Who knew? Or perhaps it was due to our fondness of geocaching – we had after all learned a lot about the history of other towns so why not here. Whatever the reason, one day we decided to follow the East Greenwich historic walking tour using our favorite geocache app, c:geo, on our smartphones.

For those of you not familiar with geocaching, not all geocaches are comprised of an actual physical ‘treasure’. Instead you search for a particular historical or geological attribute using GPS coordinates. Usually along with the coordinates, a detailed description of the history, the event, or the geology is provided. With some of these historical or EarthCache’s, to prove that you located the site you are required to answer a very specific question correctly, only then can you progress to the next location. That is exactly how this geocache was set up.

The introduction of this particular geocache states that “East Greenwich is Rhode Island’s 8th oldest town. Originally an important summer settlement for the Narragansett Indians, East Greenwich was officially incorporated in 1677. The town played a significant role in Rhode Island’s early history due to its excellent harbor and access to the primary trail through the state (Post Road). This cache will lead you to a handful of sites of historic interest within the “Hill and Harbor,” Main Street, and King Street districts of East Greenwich.” 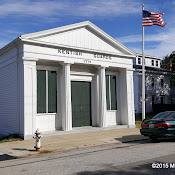 The first stop of the tour was at the armory. Oh, sure, we knew where that was so we totally ignored the GPS coordinates and marched up to Main Street to the armory located at the corner of Division Street and Main Street. On our phones, we had to enter the first name 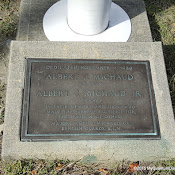 listed on a small tablet located next to the flagpole. Well, we tried every possible name,  and nothing worked, finally giving up after about an hour. Huh? Well, long story short, it was operator error! The building we went to was the wrong armory! We were at the Varnum Memorial Armory. Little did we know that there was a Kentish Guard Armory located a few blocks up the hill from Main Street on Pierce Street! The first stop and we already learned something new!

The Kentish Guards were formed here in September of 1774 to protect the town of East Greenwich from Tory attack. The 35 members of this militia would serve as officers in Washington’s army under the leadership of Major General Nathaniel Greene.

The Kentish armory, which is an example of Greek Revival architecture and the only armory of its kind was built in 1843 for $1000.

Today the Kentish Guards continue to serve and are the sixth oldest military organization in the US in continuous existence. 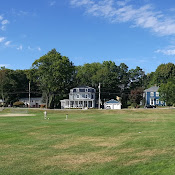 So named because it was once the athletic field for the old East Greenwich Academy (originally known as Kent Academy) which was a private Methodist boarding school from 1802 until 1943. This is also where the Kentish Guard drilled 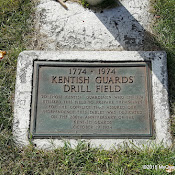 and practiced before they went off to fight in the Revolutionary War in 1775. Even today the Kentish Guard Fife and Drum Corp practice on this field. Every Wednesday evening we can hear them even while sitting on the boat.  Next summer we’ll be sure to walk up to the field to watch them. 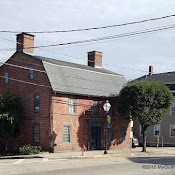 This building located on Main Street was originally built in 1767 by John Reynolds. It is significant because it was the first building to be built of brick in East Greenwich and the first known appearance of Georgian style architecture in town. Whitemarsh who bought the house in 1773 was a member of the Kentish Guards, serving under George Washington in James Varnum’s brigade during the infamous winter at Valley Forge.

The building was in danger of being razed in 1967 but fortunately the East Greenwich Preservation Society was formed and prevented the destruction of the house. 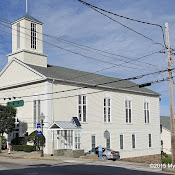 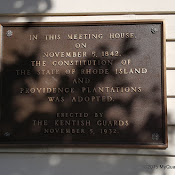 place here – the Dorr Rebellion of 1842 which centered around the voting rights for white men. At that time, only white men with $134 worth of property could vote. Thomas Dorr led an armed rebellion championing the change in RI’s voting system. As a result of this rebellion, a new constitution for RI was drafted in Newport on November 2nd. 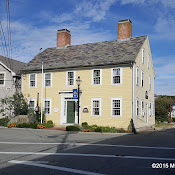 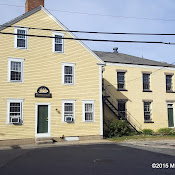 boat is docked). The building served as the county’s primary jail  until 1957. Guess it was a pretty solid jail as there is only one record of someone escaping the prison. In front of the jail is Founder’s Rock which was dedicated to the founders and early settlers of East Greenwich in 1977, three hundred years after the town was first officially incorporated. 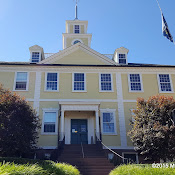 East Greenwich Town Hall
Built in 1750, the Declaration of Independence was read aloud to the townspeople from this location. What is even more interesting is that this building is actually 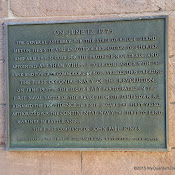 the birthplace of the United States Navy. In June of 1775, the General Assembly of RI met here and enacted a resolution to charter and arm two sloops (Katy and Washington) to protect the trade interests of RI. Three days later the Katy captured a British tender ship marking the first official US Naval action. The ship, later renamed the Providence, became the first vessel authorized for the Continental Navy, the first to land marines in battle and the first command of John Paul Jones. 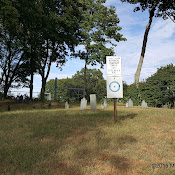 Among the 39 burials here at the Elder John Gorton Meeting Burial Ground are those of Archibald and Jacob Campbell. Archibald was born in Scotland and became one of the first 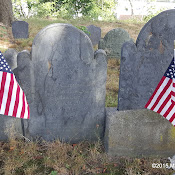 lawyers in town. His son Jacob attended Brown University and entered the office of General James Varnum to study law. He became engaged to Eliza Russell from Providence but he was stricken with consumption and died before they could be married at the age of 28. Eliza erected the costly, ornately decorated stone over Jacob’s grave. Eliza stayed in seclusion and grieved herself to death. She wanted to be buried next to Jacob but instead her father had her buried in a family plot in Providence.

In 1774 James Mitchell Varnum became the first commander of the Kentish Guards. He eventually became a Brigadier General of Washington’s Continental Army. This building was erected by the 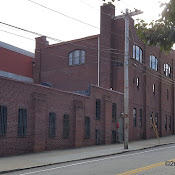 Varnum Continentals in 1913 to honor General Varnum. Today it houses a museum and is used for special events.

The Varnum Armory Museum includes representative examples of weaponry, uniforms and artifacts dating from colonial America and through the 20th century. Among the more unusual items: a functioning 1883 Gatling gun, a Civil War era James Conversion six-pound rifled cannon, and a collection of more than 600 American and foreign patriotic and propaganda posters from World Wars I and II. 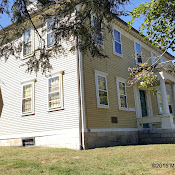 Built in 1773 Major Varnum who served as a general in the Continental Army during the American Revolutionary War built this house in 1773 as a residence for himself and his young bride, Martha. Later he became a U.S. Congressman and a Federal Judge. Built well up on the hill and featuring the best architectural standards of the day, the house has a hipped roof, modillioned cornices and a columned porch. George A. Brayton, who served as Chief Justice of the Rhode Island Supreme Court was a resident of the house at a later date. The house was purchased in 1939 by the Varnum Continentals and has since served as a museum. Who knew that there was a museum in East Greenwich!

Above are just a few of the most interesting stops on this 10 stop tour. See the geocache website for more details. You can even try to take the tour yourself, can you answer all the questions? 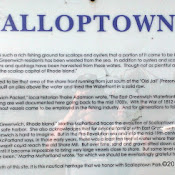 Scalloptown Park
Although not part of the geocache walking tour, we had explored this park last year and again earlier in the summer. Interesting history is documented on one of the signs in the park. Back in 1877 East Greenwich was acknowledged to be “the scallop capital of Rhode Island.” Today however you might be hard pressed to find very many scallops in the waters here. Rob remembers finding them while Quahog clamming back in the 1960’s and 70’s and since then there have been some successful efforts in restoring scallops (and the necessary eel grass) to these waters.

There are a lot of other historic buildings in East Greenwich that weren’t covered on this particular geocache tour. We have since learned that there are guided historic tours offered by the Chamber of Commerce – maybe next summer we’ll  participate in one of those. What a great way to get a little exercise while learning more about our surroundings!