We awoke this morning (Friday) to the sound of torrential rain and claps of thunder!  Oh joy, it’s another fine day in the neighborhood.  How does that song by the Carpenters go – “Rainy Days and Fridays always get me down…? (yeah, I know the lyrics really say Monday, just give me a little poetic license here, please).  Well, we were determined it wasn’t going to get us down!  The Cafe Linda (yes I do make breakfast occasionally) was open this morning with a single menu choice of a bacon and cheese omelet, toasted english muffin and coffee. And it was free! 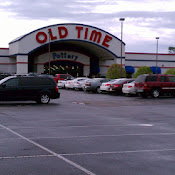 We putzed around for awhile waiting for the rain to stop. We had decided it was a good day to go to the Old Time Pottery place located a few miles down the road on Route 59 heading towards the beaches but we weren’t in any hurry.  Just as a note when we were at the Railroad Museum, the woman there had told us that the railroad’s turntable was located where Old Time Pottery is today.

Old Time Pottery isn’t really about pottery, for anyone familiar with Williamsburg Pottery in 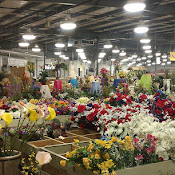 Williamsburg, VA, imagine all of it combined into one big store.  Glassware, lawn furniture, vases, silk flowers, dinnerware, rugs, blankets, sheets, bath items and anything else you can think of is in this store. You name it they probably have it.

After wandering around there for a while, yours truly who hates shopping started with the “can we go home now?”. Thank goodness we were finally out of there! 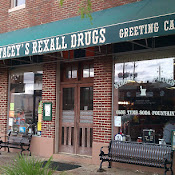 Next stop was back in downtown Foley where we wanted to go to Stacey’s Rexall and Old Tyme Soda Fountain which have been there since 1929.  Talk about a step back in time! Wooden display 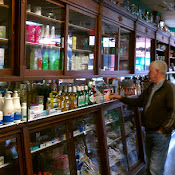 Of course, we couldn’t leave without a milk shake prepared by a soda jerk.  Although we had a local soda fountain down the 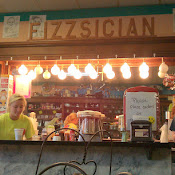 street from where I grew up, I never knew where the term soda jerk came from – it certainly had nothing to do with their level of intelligence, did it?  In Wikipedia, I found the following “the name

soda jerk came from the jerking action the server would use on the soda fountain handle when adding the soda water.”  Hmmm, that mystery is solved! 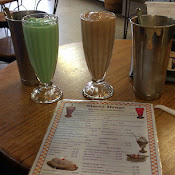 can read the menu, they serve floats, ice cream sodas, milk shakes, phosphates and egg creams, lime rickeys, sundaes and hot dogs! It was a tough sacrifice but we knew we had to sample something so we could entertain our blog audience (oh, poor us). I ordered a Key L 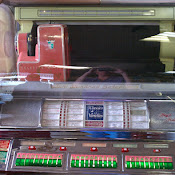 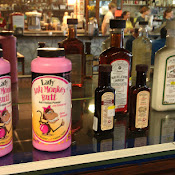 the name you want to give it, it was delicious!  We sat for a bit slurping away while watching the people and the train and listening to music coming from the old fashioned juke box playing 45 rpm records. When we were don 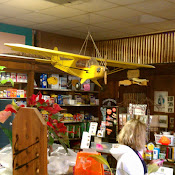 e, we   browsed some of the display cabinets which contained a lot of the usual stuff you would find in a drug store but there were some strange products that we weren’t familiar with (thank goodness) such as Lady Anti-Monkey Butt Anti-Friction Powder.

By the way, on the back of the menu, it says that it is a full service 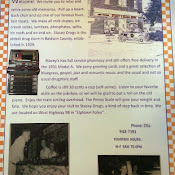 pharmacy  offering free delivery service in a 1931 Model A!  And they still serve coffee at 10 cents a cup (self service)! Imagine that! 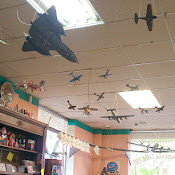 ere hanging everywhere from the ceiling so those were fun to look at as well.  It was quite an interesting place to  say the least and if you happen to be in the area and have a craving for an old fashioned milk shake, stop in!  It’s definitely worth a visit! 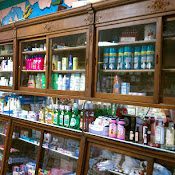 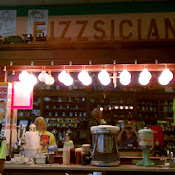 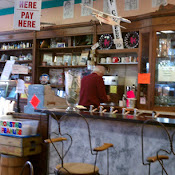 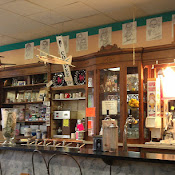 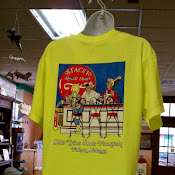