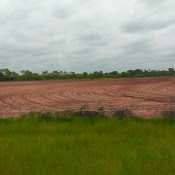 Our next destination was Cotton Hill COE (Corps of Engineers) Federal Park in Fort Gaines, GA, about 160 miles northeast of Santa Rosa Beach.

Around 11:15 am, we pulled out of our site and after stopping near the check in station to hitch the toad, we were on our way. Taking a left out of the campground, we then took the next right and turned east onto FL-30E/US-98E. After about 10 miles 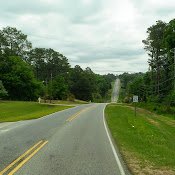 We had intended to buy fuel on the day we arrived at Topsail but an appropriate station never came along. They were always on the wrong side of the road or didn’t have enough room for us to maneuver – (remember, we can’t back up with the car in tow).

So with the low fuel warning light now active on our 100 gallon tank were both getting a little nervous. Plus it was Easter Sunday and we weren’t sure what would be open. The day before Rob had used the satellite view on Google Maps and had found a gas station with separate diesel pumps and a turnaround at I-10 exit 96 near DeFuniak Springs so we hopped off the highway there to fuel up. Luckily the station was open and although it was no longer an Exxon, the diesel pump island and turnaround were exactly as expected. We only took about 70 gallons so now we know the gauge provides conservative readings – good to know! Now with a full tank and all of us feeling much better (including the beast), we were on our way again. The rest of the route is as shown via the blue line in the map above. 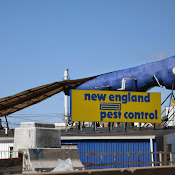 What you see while driving along the interstates is often pretty boring, but what you see along some of the state highways and back roads can sometimes be much more entertaining.

As an example, in Providence, RI, there is the Big Blue Bug (aka Nibbles Woodaway), a 58 feet long, 9 feet tall, and 4000 pound fiberglass and mesh blue termite structure on the south side of I-95 serving as an advertisement for Big Blue Bug Solutions (Pest Control). This termite which is 928 times larger than a real termite has been featured in the movie Dumb and Dumber and has made appearances on Oprah, the Today show, The Daily Show, Family Guy and Roadside America to name a few. 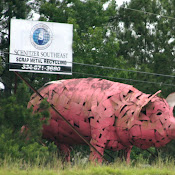 On this leg of our journey we drove through Dothan, AL, which seemed to be a somewhat “interesting” place, at least based on what we saw along the road side.

First there was Schnitzer the Pig, 26 feet long, 13 feet high, made of steel sheets welded to solid round rods and perched on a trailer by the side of the road. At first I wasn’t sure what his purpose was but since then I found out he is the mascot for Schnitzer Southeast Scrap Metal Recyclers. Not quite as impressive as the Big Blue Bug but maybe a just a wee bit cuter (after all pigs are better looking than bugs, don’t you think?) and I do like his bright pink coloring! Schnitzer even has his own Facebook page! 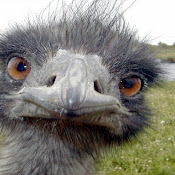 And then shortly after that we passed a Syrup company with a sign pitching the availability of Emu oil. Who knew about the oil of the Emu! Guess we must be behind the times because neither one of us had ever heard of Emu oil before and didn’t have a clue about it’s uses. After reading about it, those cute Emus aren’t at risk because of me – I don’t think I’ll rush out to buy any!

We passed at least two establishments in this area touting Deer Processing, and then there were all of the freshly plowed fields which caused us to wonder what crops were being grown. The mystery was solved when we went by a huge sign at the entrance to the National Peanut Festival grounds. Apparently Dothan, AL is known as the “Peanut Capital 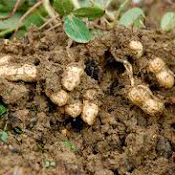 of the World” and is a prime location for growing peanuts. I always thought that like other types of nuts, peanuts grew on trees or shrubs but that ain’t so! Peanuts are actually legumes and are a member of the bean family so the plant flowers above ground and the legume pod (peanut) grows underground.

Each fall, the National Peanut Festival is held to honor local peanut farmers and to celebrate the harvest season. Did you know that one fourth of all the peanuts grown in the United States are grown within a 100 mile radius of Dothan? We sure didn’t! Of course we didn’t even know that Dothan, AL even existed! Maybe their love of peanuts explains why we saw so many signs in the area for not only hot boiled peanuts but fried peanuts (never heard of those before) as well! 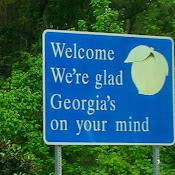 As we crossed from Alabama to Georgia, we noticed that our arrival time reported by the GPS was later than we thought it should be. Huh, what was with that? Then suddenly the light dawned, we were no longer in the Central time zone (where we have been since February), we were now back in the Eastern time zone so it was an hour later. Drats, I was just getting used to everything being an hour earlier!

As mentioned above, our destination was Cotton Hill Campground which is an Army Corps of Engineers (COE) campground located on the Walter F. George Lake (aka Lake Eufaula if you are 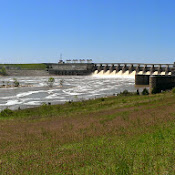 from Alabama). The lake is 45,000 acres with 640 miles of shoreline located on the Chattahoochee River at the Alabama/Georgia state line. The lake was formed when the Walter F. George Lock and Dam and powerhouse were completed in 1964. Enough electricity is generated to serve up to 56,000 homes. The lock itself is the second highest east of the Mississippi with a lift of 88 feet. 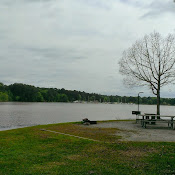 Thanks to the Army Corps of Engineers there are 13 COE day use parks and four adjoining campgrounds along the lake. The state border between Alabama and Georgia as well as the time zone line cut through the middle of the lake.

Located in Ft. Gaines, GA, Cotton Hill Campground has 3 loops (Pine Island, Marina View and Old Mill Road) with 91 full hookup sites with water, 20/30/50 amp electric and sewer, cement pads, a picnic table, a fire ring, a pedestal grill, a tall hook (perhaps to hang a lantern or a bug zapper) and a fish cleaning table. General amenities include a dump station, bath/laundry facilities, a boat ramp, fish cleaning station and two playgrounds. The lake is known as the “Bass Capital of the World”. Cost is $26/night or $13/night for those of us with a federal Senior Pass.

If you plan on staying here, realize that there isn’t much around – if you need groceries (Winn Dixie, Wal-Mart) or other supplies, the nearest stores are in Eufaula, about 30 minutes away. 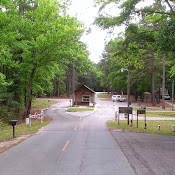 Anyway, we finally arrived at Cotton Hill (near Ft. Gaines, GA and Eufaula, AL), stopping at the office to check in. Rob made sure to ask if there were any ants on the sites! 😉 and the camp host said no. When we made our reservation, the site we chose was #18, a back in site right on the water, located on the Old Mill Road loop.

After we unhitched we drove to our campsite, I was leading the way in the van while Rob was following me in the coach. We noticed that the majority of the sites had pretty significant downward slopes to get to the cement pad but when I asked Rob 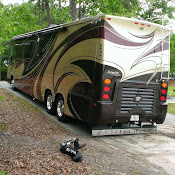 about it, he said that it shouldn’t be a problem. Okay, sounded good to me! As usual, I stood behind the coach so I could direct him as he started to back in. As he got to the bottom of the slope, I became quite concerned about the mud flap scraping on the cement since there was only about 1/2 inch of clearance. Being so focused on that, I wasn’t paying attention to the tow bar!

Yikes, the tow bar had begun to scrape on the cement! 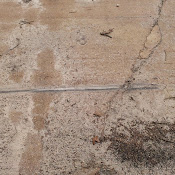 I frantically waved to Rob telling him to stop but it was too late! Luckily Rob was able to pull forward a bit, then came out to inspect the tow bar and hitch to see if there was any damage. Except for a minor tear in the tow bar cover and some scrapes on the tow bar itself, it seemed to be okay. Whew! Out came the tool box so he could remove the 6″ drop hitch and the entire bar so we could make it all the way in to the site. He also 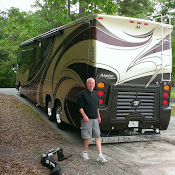 hoisted up the mud flap with a short piece of line we keep for that purpose so that wouldn’t get scratched. Finally he backed in the rest of the way.

Motorhomes beware! About 90% of the sites here have a sloping driveway sharply transitioning to a level pad. The slopes vary from slight to steep. Even on a slight slope like our site you need to be very mindful if you have a low ground clearance coach (most diesel pushers) or a drop hitch for towing. 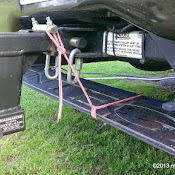 Even higher clearance gas motorhomes need to be wary as well due to their typically extra long tail (distance from the rear axle to the back end of the coach). If you are concerned about this issue, sites 10, 11, 33 & 38 in Old Mill Road Loop are mostly level.

Another factor Diesel Pushers need to be aware of here at Cotton Hill are the unusually tall concrete curb stones at the back end of each site. With our tag axle tires near or touching the curb stone, if we were to dump the suspension air bags like we normally do before leveling, it was too close to call if our transmission housing would hit – that would be real bad! In this case we manually deployed the leveling jacks and did not dump any air. When departing we had to be careful to let the air bags fill before retracting the jacks. Pulling forward 4 or 5 feet would have safely isolated the tranny and engine oil pan from harm by the curb, but in our case that would have put the front wheels back up on the slope!

After we recovered from the tow bar excitement, we had a chance to take in our beautiful site right on the lake! Plenty of space between us and our next door neighbors especially since the sites are staggered so you are not looking directly at your neighbor’s unit. 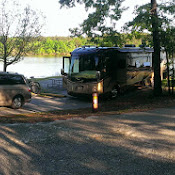 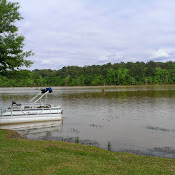 tied up right at the end of your site. It was also a great fishing spot – on one of the days we were there our next door neighbor caught 3 pretty good size fish!

As soon as we landed we were officially greeted by Mama & Papa Goose with four little ones. So cute! Many other birds here too! 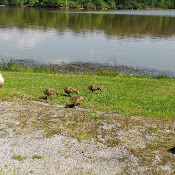 Before we left Santa Rosa Beach, we drove to Destin and picked up a mini-ham from Honey 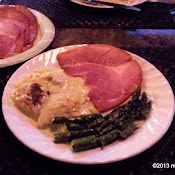 Baked Ham. As soon as we got settled, I got busy in the galley making Potatoes Gratin and Roasted Asparagus. Although it was another “first” – our first Easter away from family – our dinner (which was delicious if I do say so myself) made it a little more special than any other day.

After our very enjoyable dinner, we settled in to watch a recorded episode of “Game of Thrones” before hitting the sack.

The next day though we did some exploring of the area! Stay tuned to find out what we did! 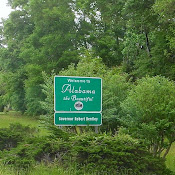 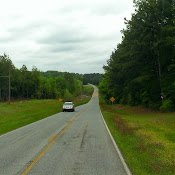 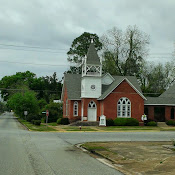 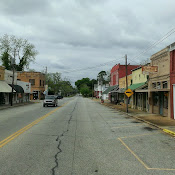 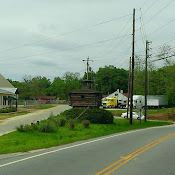 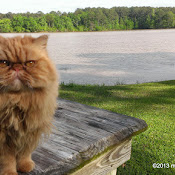 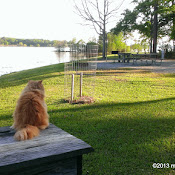 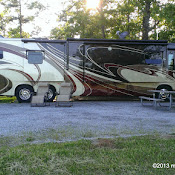 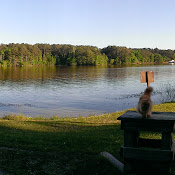 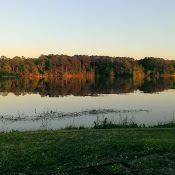 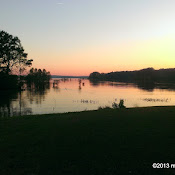