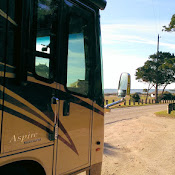 Around 9:00 a.m. on Tuesday morning, we departed from site #209 at Myrtle Beach State Park, hitched up the toad and headed to our next destination, Blythe Regional Campground in Brunswick, GA.  We had tried to make reservations at James Island County Park near Charleston, 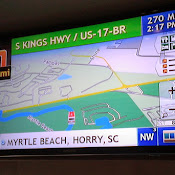 about a 2 1/2 drive but there were no sites available (we hear this is a really nice park with full hookups). As you can see in the photo of our GPS screen on the right, it was a 270 mile drive so our arrival time without stops would be after 2:00 p.m. A moderately long driving day.

We were quite surprised that morning at Gizmo’s behavior.  At night he usually jumps up under the front shade and sleeps on the dash and that’s where he was this morning too.  You can see him through the door window in the picture above left. When Rob started disconnecting all the hookups and started the engine we expected his standard reaction of terror and panic and for him to go flying under the sofa.  Well I guess the little bugger is slowly become a real full timer – he stayed up on the dash watching all the leaves blow off the coach as we drove the mile or so out of the campground!  However, when we got out into traffic it seemed like he didn’t like seeing other vehicles and quickly scampered under the sofa, but he gave us another surprise later in the trip – I’ll get to that later. 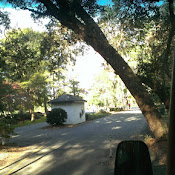 At the exit of Myrtle Beach State Park, we were concerned about the tree in the photo left – marks on the trunk indicated it had been hit by more than one unwary traveler with a tall rig. The campground added a marker in the road as a reminder of the low clearance here, just keep well to the left and all will be fine. The photo makes it look worse than it really is.

Leaving the state park, we turned left onto Route 17 South which is a 4 lane divided highway.  Traffic wasn’t bad although initially it was a little congested around the traffic lights and various shopping areas. Further on Route 17 took us through the Francis Marion National Forest so driving was easy.  One observation to be aware of – there are no rest areas, pull out areas or even a paved shoulder along this stretch, so if you are in a motor home and need to stop for a potty break or for any other reason, you are flat outta luck! There are of course a few gas stations and other businesses, but its hard to tell if they have room for a long rig until you go past them. 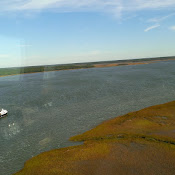 To avoid driving through downtown Charleston, we took I-526 (Mark Clark Expressway) which loops around the city and then joins back up with Route 17 southwest of the city. Eventually 17 met up with I-95.

Those of you who have diesel motor homes or larger gas rigs know that often getting fuel is not as easy as it is with a car.  Sometimes it can be downright challenging trying to find a station that has pumps that are easy to access with ample room to make a wide turn if necessary. For diesel coaches at least we have the option of using the trucker services.

Those of you reading this who don’t have a motor home may not know that when you are towing a vehicle (aka toad) that has all four wheels on the ground (like we do), 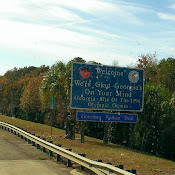 you can’t back up. Well, maybe a little, but if you are not careful damage will be done because the toad front wheels will not track properly when backing. Therefore, before pulling in somewhere you have to make sure there is plenty of room for you to turn and exit the station without backing up. If you mess up, besides the embarrassment and angry stares, that means unhitching/rehitching the toad!

Just before we crossed the SC/GA state line, we stopped to fuel up at a BP in Hardeeville. This is a busy stop with lots of truck traffic so you would think it would have easy access – AVOID STOPPING AT THIS BP IN YOUR MOTOR HOME!  The fuel lanes are extremely narrow and to make matters worse there are large yellow cement posts (all pretty well scraped up) on both sides of the fuel island.  We made it into the lane but then we weren’t even sure if we could open the door without the steps or door hitting something.

Just after we pulled in, a Winnebago Journey pulled in to the next fuel lane. They commented that they had never seen a station with such narrow lanes either. Geesh what were they thinking when they designed and engineered this place??? Unfortunately for the Winnebago he pulled out before we did and tried to make a left turn out of the right angled fuel lanes. Bad move. There were several trucks parked along the outer edge of the lot so he didn’t have enough room to make the swing.  Oh dear, he ended up having to stop and unhitch his toad while blocking the main trucker exit. Better him than us! Felt bad for him – so embarrassing! At this point though we were blocked in by the Winnebago too, but Rob got out to check for other options and found an open path between the parked trucks into a back lot that is apparently intended as a turn around area.

The issue was that the Winnebago should have pulled straight out then made the easy right into the turn-around lot behind the station – problem was you couldn’t see this was the way to go due to all the parked trucks. We’ll definitely avoid stopping here again!

Speaking of fuel, the cost for diesel in SC and GA is currently averaging around $3.65 with a low of $3.41 (at Walmart) versus the $3.89 – $3.99 we were paying back in MA & RI. We also saw gas as low as $2.88 at a Sam’s Club. And the even better news is that since we left PA and their rolling hills for the lowland flats, our fuel consumption on the bus has averaged around 9.7 mpg vs the 7.0 mpg we got on the Discovery. How awesome is that!

After that fun experience in Hardeeville, we were once again back on I-95 again.  We made one more stop at a rest area to have a quick bite to eat.  The rest of the drive was uneventful. 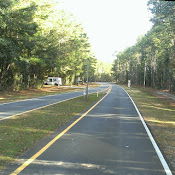 Near Brunswick, our two GPS ladies had a dispute about what exit we should take.  The Rand McNally GPS said to take exit 29, Google Maps said exit 26.  Not fully trusting either GPS, I checked the Blythe Island Regional Park website where they recommended Exit 29.  As it turns out Google had suggested the shorter route via Exit 26 for an approach from the north. The Rand McNally picked the slightly easier approach even though it involved backtracking a few miles.

Finally we arrived at the campground around 3:30 p.m.  At

the registration office, we were assigned site #72. When we came back out to the beast, Gizmo had come out of hiding and was perched on the dashboard. That alone was a surprise but get this, he stayed on the dash as we drove through the campground taking in all the interesting sights.  Wow! Pretty funny! 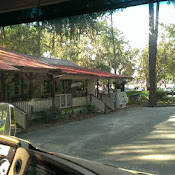 Our site is a very long pull through (90-100′) so it was an easy setup. Too tired to do much of anything so it was a quiet night and early 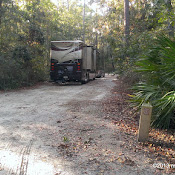 bedtime. The weather forecast for Wednesday didn’t sound great so we might just wait to explore the area.

Blythe campground might sound familiar – we stayed here back in January of 2012 for a few days where we explored Jekyll Island and St. Simons Island.  We obviously enjoyed our rather short visit so it was an easy decision to return and spend a week here.  More about our stay at Blythe Island Regional Park Campground later. 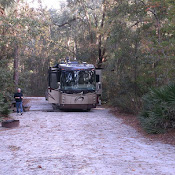 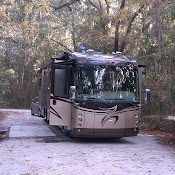 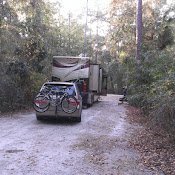 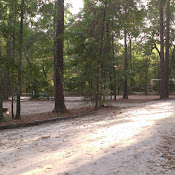