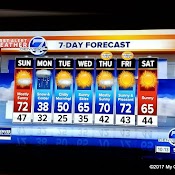 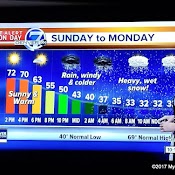 On Sunday, October 8th, we set off for another short drive of about 65 miles to Cherry Creek State Park (see our review) in Aurora, CO (near Denver) which would be our base for a five day stay. Hard to believe that the warm 70 degree weather would be replaced the next day with temps in the 30’s and snow. And we thought New England had crazy, unpredictable weather! But we knew when we arrived in Colorado so late in the season that we ran the risk of cold and snow. As long as we didn’t have to drive in it that was okay. 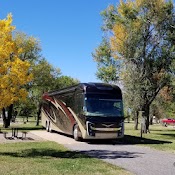 Speaking of weather, one thing that surprised us somewhat about the Colorado weather was the total lack of humidity. From our travels last winter, we knew that obviously the desert landscapes of the 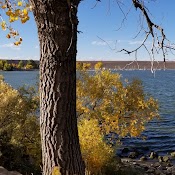 southwest were arid but we weren’t expecting it to be quite as dry in Colorado. On several days the humidity was only 6%. For us folks from the Northeast used to higher levels of humidity, this was a tough adjustment. Everyone we talked to, on TV, on signs and in pamphlets, the mantra was: be sure to drink lots of water. Since you don’t perspire with the low humidity, people can quickly get sick from dehydration without realizing it. And the high altitude only compounds the need to keep hydrated. A bottle of water was always close at hand for us. So in a way, we looked forward to potential snow as it would increase the humidity levels.

Anyway, as soon as we settled in to our site, to take advantage of the 70 degree weather, we set out to explore beautiful Cherry Creek State Park. Wow, the large pleasant campground is part of an enormous outdoor paradise. Anchored 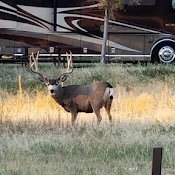 around an 880 surface acre reservoir, this park offers 125 spacious full hookup campsites, miles of hiking/biking trails, numerous picnic areas near the water, boating opportunities, a shooting range and even a special area to fly model airplanes (not that we have one). Hard to believe that such a massive and full featured natural paradise could exist so close to a big city environment! Wildlife was abundant 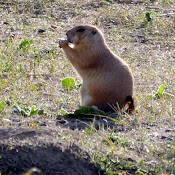 here as well. We watched elk grazing near our site in the campground, saw mule deer peeking out from the brush along the roads and watched prairie dogs performing their antics in an area where the 1993 World Youth Day was commemorated. Very cool! 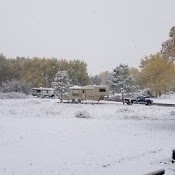 Monday turned out to be a quiet, stay inside kind of day because just as the local meteorologists predicted, it snowed Sunday night. A few inches of snow greeted us in the morning.  After moving constantly and doing so much sightseeing for the past few weeks, we actually welcomed having a 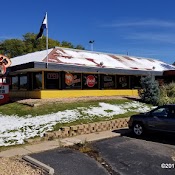 stay at home day. Plus even though we have been running away from New England to avoid the white stuff since 2010, it was kind of pretty. But thankfully, it didn’t last long and never even stuck to the roadways – by late Tuesday morning, the temperature climbed to the 50’s. Bye, bye snow! 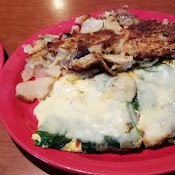 On Tuesday, a hearty breakfast at Sam’s No. 3 in Aurora provided the necessary nourishment for a busy day of sightseeing, a huge (leftovers the next day) delicious Veggie Omelet ($9.99) for me and 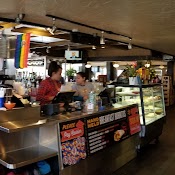 Touring the Denver Mint (free) was at the top of our list of places to visit but we quickly learned that tickets are distributed on a first-come, first-served basis (no reservations or advance tickets). Even though there are six 45 minute tours given daily (8 a.m., 9:30 a.m.,11 a.m.,12:30 p.m.,2 p.m., and 3:30 p.m.), by the time we found a parking spot and walked to the Mint, there was a sign stating that all tours for the day were full. According to this website, “visitors often arrive as early as 5 a.m. to secure tickets.”  Huh? Get up that early? No, I don’t think so. Fight rush hour traffic in the city? No way. Guess for this visit, we’ll scratch this tour of our list. 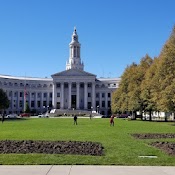 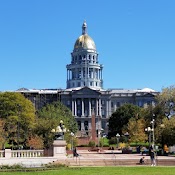 south of Boston and Rob grew up near Providence, RI, both capital cities and neither one of us has ever toured those capitol buildings!

It was a pleasant walk from the Mint to Civic Center Park. Known as the center of the civic life in the city, numerous institutions of arts, government, and culture can be found here. It is also home to many fountains, statues, and formal gardens (must be quite lovely in the summer), and includes a 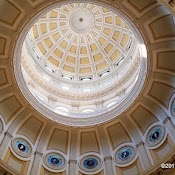 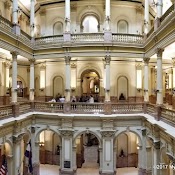 Sitting on the eastern end of the Civic Center Park was the Neoclassical style Colorado Capital Building with its gold dome rising 272 feet above the ground gleaming in the sun, home of the Colorado General Assembly and the offices of the Governor of Colorado and Lieutenant Governor of Colorado. Interesting to learn that the distinctive dome is plated 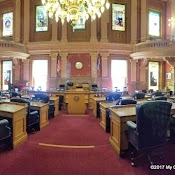 with Colorado gold, which has been replaced several times. Believe it or not, to coat the entire dome only requires 50-60 ounces of gold (current value is over $1000/ounce)!

Designed on an axis in the form of a Greek cross measuring 383 feet long by 315 wide, the building resembles the basic design of the nation’s Capitol in Washington, D.C. Built in the 1890’s, the 5 foot 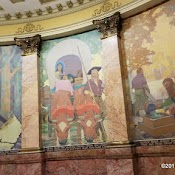 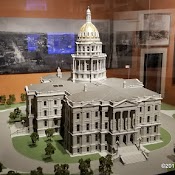 construction), we were told that there were free guided tours of the building offered from 10 am to 3 pm Monday through Friday. Since a tour had just left and we would have to wait close to hour to take the next one, a self guided tour was our choice. Unfortunately, not taking a guided tour meant that 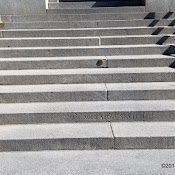 we would not be able to enjoy the scenic view from the observation deck of the dome.

The interior was striking with its polished brass, beautiful wood and stone work and the many stained glass windows depicting people or events related to the history of Colorado. Portraits of every president of the United States lined the halls. Although the Senate and House of Representatives were not in session and we didn’t get to see any state legislators in action, we did at least get to see their chambers. 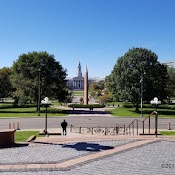 On the west side of the building, there is a step engraved with the message “One Mile Above Sea Level.” Interesting to note that determining the exact measurement of the 5,280 feet in elevation has been difficult over the years. Three of the granite steps leading to the main entrance have been identified as the mile high point. The original marking is on the fifteenth step, but a resurvey by Colorado State University students in 1969 led to a new marker being embedded in the 18th step. Then in 2003 with the advent of more accurate GPS surveying technology, the mile high point was more accurately determined and a 3rd benchmark was installed on the 13th step. Perhaps sometime in the future, it will move again! 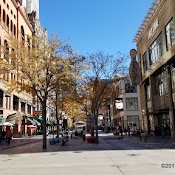 Another attraction in downtown Denver that we wanted to visit was the 16th Street Mall, a 1.25 mile long pedestrian promenade designed by famed architect I.M. Pei. Made of red, white and gray granite in a repeating pattern, according to what we read on their website “the promenade when seen from above resembles the skin of a diamondback rattlesnake.” Finding a nearby parking space, it was a short walk to get to the pedestrian friendly mecca, home to over 300 locally owned/chain stores and over 50 restaurants. We hopped on the free shuttle bus to get an overview of the area then walked for a while. To be honest, after visiting Boulder’s Pearl Street Mall, we were a little disappointed, probably because it was more of a city environment, not as clean or upscale as Boulder and with the free buses, you had to constantly be on the watch when walking.

Tired from all of our city exploring, it was time to head back to our coach to enjoy the remainder of the afternoon and evening at our pleasant and expansive campsite. But our sightseeing in the Denver area wasn’t done yet, we had another excursion planned for the following day….stay tuned!