Well for Rob & I it surely wouldn’t hurt, but in this case I’m talking about our beast! After getting the coach weighed at Spartan Chassis last June, Rob moved a lot of 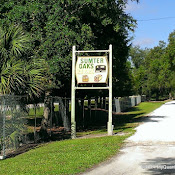 heavier stuff (tools and bottled goods for example) to the rear of the coach, hoping to better balance the weight of the contents. Since then, Rob had been wanting to get the coach weighed again.

At many of the highway travel centers, there are truck scales but that is not the ideal way to weigh an RV. On those types of scales, the wheels are not weighed individually so there is no way 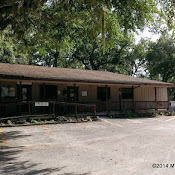 of knowing if one side or corner of our RV is heavier than the others. The better solution is to attend a rally where weighing on a portable scale is offered, or to visit one of the three Escapee facilities in the country that offer SmartWeigh. SmartWeigh caters specifically to RV’ers and they will measure the weight of each wheel on your trailer or coach (3 axles so 6 weigh points in our case), plus each wheel on the tow or towed vehicle and will also measure your actual RV height.

Knowing that the Escapees Sumter Oaks Campground in Bushnell, FL had a SmartWeigh station, that became our destination after Lazydays. When I called to find out about availability at the campground (yes, they had plenty of room, it was May after all, so no need for a reservation), I asked about the SmartWeigh appointment and was told to call Al Peterson, the Weighmaster, directly. I was able to set up a time for Thursday morning at 9:00 a.m. Because we needed to provide a lot of information about our coach, Al emailed us a questionnaire so we would be able to fill out the paperwork  ahead of time.

Sumter Oaks is approximately 50 miles from Seffner, FL so it should have been a 45 minute easy drive up I-75. Nope, that wasn’t going to happen – Google Maps showed an accident just north of Seffner and a driving time of 2-1/2 hours! Time to put Plan B into action – back roads it would have to be. So off we went on US-301, heading north.

US-301 is a two lane highway with no shoulder so it wasn’t as easy as driving on the highway but it wasn’t too bad. It worked out well because we knew the registration office would be closed for lunch between 12:30 p.m. and 1:30 p.m. We arrived at 1:25 p.m., greeted by a very friendly, Wanda in the office who gave us the typical Escapees hug. When we asked about satellite, she said the best sites were the pull thrus but those sites were only 30 amps. All 50 amp sites were in the heavily wooded section of the campground.

For more details check out our review of Sumter Oaks. 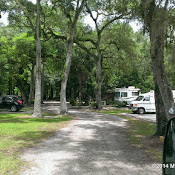 To get to our site we  had to drive down a fairly narrow, twisting, tree lined gravel loop road. Some of the interior roads here are a bit tight for longer rigs and might be intimidating for drivers with less experience. After some skillful tree dodging by Rob we made it to our pull thru site, #74. 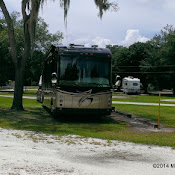 Just as we were about to settle into our site, I asked Rob about our tanks, thinking that usually when you are weighed, you need to have full tanks. That was the status of our coach when we were weighed at Spartan Chassis, so for comparison purposes it needed to be the same this time. Oh, darn, was hubby’s reply, I totally forgot – our fuel tank is less than half.

Guess we weren’t ready to settle in yet. He unhitched the car, leaving it there on the site and off we went in search of diesel. It was actually a good thing that we did. After circling the 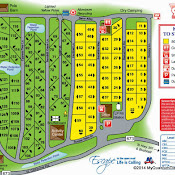 campground and arriving back to the entrance/exit, we realized that it was a 180 degree turn from Sumter Oaks Drive  out to St. Catherine Road (673). Rob had to start the turn, then back up to make the swing. No way would we be able to do that with the tow vehicle attached.

Fortunately there were several gas stations within a 15 minute drive so our mission was quickly accomplished! With our full tank, back we went to the campground where we once again wound our way along the narrow loop roads back to our site. With that chore done we were finally able to settle into the site.

Even though it was pretty steamy outside, we couldn’t run all 3 AC units at the same time since we only had 30 amp power. With two AC units going, every time the fridge kicked in, the pedestal breaker would pop. Rob turned off the humidity control on the fridge and that seemed to be just enough to keep two of our AC’s running plus the fridge. We have had 30A sites several times in cold weather and it has never been a problem, even with our fireplace (electric heater) running. As our first time on 30A in hot weather, the lesson learned is that is not quite adequate for our coach. Rob was wishing we had a hybrid inverter – that device would pull some of the needed extra electricity from our batteries when the grid power became insufficient. 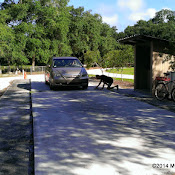 The next morning we were up early for our appointment. Our plan was to hit the road again headed for our next destination once we were weighed. As the tow vehicle would be weighed separately from the coach, and we flat tow (car has all four wheels on the ground), it did not matter if it was hitched up or not. Al Peterson greeted us at the weigh station and gave Rob instructions on positioning the coach. We both stayed in our normal positions inside the coach during the procedure. 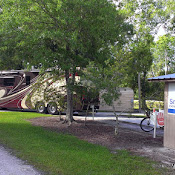 So does the beast need to go on a diet? Not really, but maybe needs some adjustments. As we were somewhat overweight on the front axle last year, Rob relocated a bunch of heavier items towards the rear and that shaved a few hundred pounds off the front axle. This time we were only over the front GAWR (14,600) by about 400 pounds which is fairly insignificant, but still we don’t like to be over the limit. Rob is going to see if we can play around with the tag axle adjustments to shift some more of the load off the front.

When the coach was new and we had not yet loaded it up with our stuff, the factory weighed it at 36,200 bringing the combined total of all our clothes, gear, food, cats, and everything else aboard to about  3,300 pounds – not bad, we had always thought our stuff amounted to more like 5000 pounds. The cargo capacity of the coach is listed as 10,000 pounds but realistically it would be difficult to load that weight aboard without exceeding the front axle weight rating. For 2015 new Entegra Aspire’s like ours have beefed up the front GAWR from 14,600 to 16,000.

Here’s an excellent blog site that I found that explains it all. Turns out that the owners of the blog site (roadslesstraveled.us), Mark and Emily Fagan, actually wrote an article about SmartWeigh for the Escapees magazine and were given permission from Escapees to share the article with others. 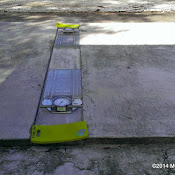 our coach using a long yellow pole with a cross-bar at the top so he could measure the highest point – in our case that happens to be the rear bathroom skylight. Always important information to have when approaching a potentially low bridge. We knew what the height was according to the Entegra specs but it was verified by Al – 12′ 8″. Add another 3″ to be on the safe side.

After we were done, instead of driving along Sumter Oaks Drive to the exit like we did when we went to get diesel, we took a left on Sandhill Crane Lane, a right on Gator Alley, then another right on Sunshine Alley. Now turning onto 673 was an easy 90 degree turn. 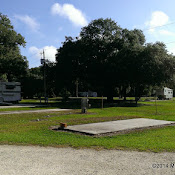 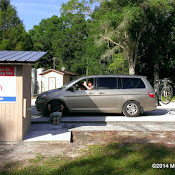 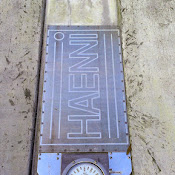 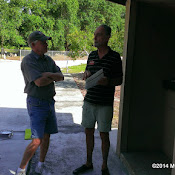 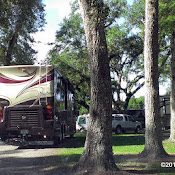