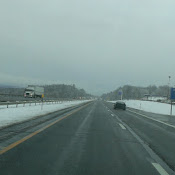 On Thursday morning, March 7th, we checked out of the Essenhaus around 8:30 a.m. to begin our journey home.  Although we were eager to get home, we had such an enjoyable stay we were sad to have to leave, but maybe someday we’ll get a chance to stay there again hopefully under better and warmer weather conditions.

Our plan was to make it about halfway home on Thursday and finish the trip on Friday. After checking all of the weather forecasts between Middlebury and home for Thursday and Friday, we weren’t sure if we would need to spend an additional night somewhere along the way.

It appeared that the system that had brought Tuesday’s snow storm was far ahead of us and was about to collide with another storm system coming up the east coast. A foot of snow was expected in Washington D.C. and then it was likely to veer slightly northward to hit New England.  Oh joy!

Except for the lake effect snow which we had coming off of Lake Erie from Cleveland eastward through to Buffalo, where there was sunshine and blue sky, our drive on Thursday was pretty uneventful. My brother sent me a text telling me that our hometown of Norton was in the “sweet spot” and already had 15 inches of snow. Geez!

Now we had an additional worry – since the road we live on is not an accepted town public way and just a dirt road, plowing it is not at the top of the town’s priority list. Would we be able to get down the lane in our front wheel drive van without getting stuck?  Even if we could, how would we get in our driveway?  Rob sent an email to our next door neighbor asking him if the road had been plowed.  If not, could he send us a text later in the day to give us a status? Pete responded that he had a new plow and that he would be glad to plow our driveway and the road if necessary.  Wow how very nice of him!

Around 2 p.m. on Thursday we stopped at a Wendy’s for some lunch and to figure out where we might stay that night.  We knew we weren’t going back to the Comfort Inn that we stayed at on the way out to IN.  After perusing all the potential candidates, we finally decided to go a bit further than the halfway mark and stay at Cresthill Suites in Syracuse.

As we drove off the exit, things started looking very familiar. As we got closer to the hotel, we realized that we had stayed here several times – once by ourselves and another time with Rob’s parents on our way back from a family event in Chicago.  Then as soon as we walked in the door at 6:00 p.m. we recognized the older gentleman, Leo, at the desk. Usually we don’t remember the desk clerks but Leo is one of a kind.   He has quite a sense of humor and is one of those people who make you feel so welcome that you want to return over and over again.

The other great thing about Cresthill is that on Monday through Friday from 5 p.m. – 7 p.m., they have a free dinner buffet complete with free beer and wine.  Thursday night happened to be Italian night so there was pasta with Alfredo sauce, pasta with marinara sauce, garlic bread, salad as well as pulled pork with caramelized onions with gravy and mashed potatoes.  The food was quite good and made things easier for us in that we didn’t have to find a place to eat or get take out.  We were happy!  If you are ever in the area and need a place to stay, we highly recommend Cresthill Suites in East Syracuse.

When we woke the next morning, there was at least 2″ of snow on the ground so we took our time having the hot breakfast buffet (scrambled eggs, sausage, egg casserole, french toast, fruit, juice and coffee) in the hopes that the roads would be clear by the time we left.  We left around 10:30 a.m. 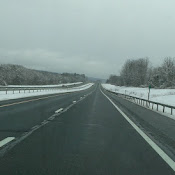 The radar showed a big glob of blue (snow) beginning at Albany with darker shades of blue (heavy snow) all the way to the coast of MA. Once again we debated on whether we should plan to stay 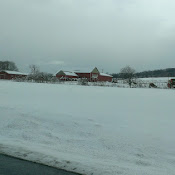 in Albany or try to make it home and once again we decided we would drive as far as we could and stop if the roads got icy.

Amazingly the roads were clear and dry – much better than we expected. Even driving through the hills of the Berkshires on the MA Pike (I-90) in western MA was not a problem.

Even when we exited the MA Pike to Interstate 495 the conditions were still clear. However a 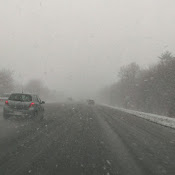 few miles further south in Milford, MA (about 20 miles northwest of Norton), OMG, it was like someone had flicked a switch!  It was snowing really hard with very low visibility due to the winds and heavy snow. The roads had obviously been plowed and treated and while not too slippery were covered with slush and it was very slow 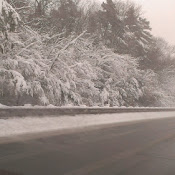 going, taking us twice as long to get home.  Fortunately we made it to our street without incident.

Our road was not plowed 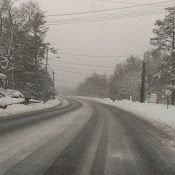 but a few cars had been up and down and left us some ruts to follow. Our van is very low to the ground though and Rob had to really gun it to keep from getting stuck. Amazingly we made it all the way to our 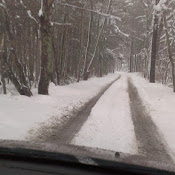 driveway but as Rob tried to turn in, the van had other ideas and we landed in a snowbank.

Oh, great! It was now about 4:00 p.m. and it was still snowing! Luckily Rob had brought a pair of boots so with those on, he plodded down our 300 foot driveway in knee deep snow towards the house to get a shovel and some grip pads to put under the tires for traction.  It took about 1/2 hour for us to get “unstuck”.  Thank goodness!

After driving all day, the last thing that Rob wanted to do was to 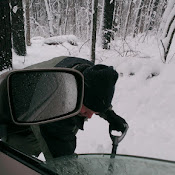 hop in the truck and plow but that’s what he had to do. I think after all was said and done, we officially had about 20 inches of snow which was only a couple of 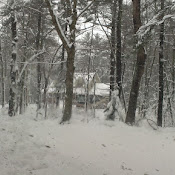 inches less than what we had from the blizzard a few weeks earlier.

On Saturday after running a few errands in the morning, he was out there doing more cleanup on the driveway, the front steps and shoveling off the roof of the motor home.  Luckily it was in the low 40’s and on Sunday it is 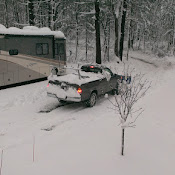 supposed to be in the mid 40’s so there is a lot of melting and hopefully this mess won’t be around too much longer.

far away.  Let’s hope the snow stays away as well! To be honest, I’m really getting tired of writing about it! And you’re probably tired of reading about it!