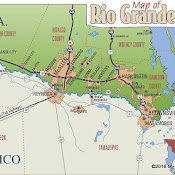 The Rio Grande Valley is located in the southernmost tip of South Texas and lies along the northern bank of the Rio Grande River. Although it is known as a “valley” it really isn’t, instead it is a delta or floodplain containing many oxbow lakes or resacas formed from pinched-off meanders from the earlier courses of the Rio Grande.

From an economic perspective, this area is reliant on both tourism and agriculture. Texas is the third largest producer of citrus fruit in United States, the majority of which is grown in the Rio Grande Valley with grapefruit making up over 70% of the Valley citrus crop. In fact, Mission has been advertised as the “Home of the Ruby Red Grapefruit” since 1921. Other citrus crops in the valley include orange, watermelon, tangerine, tangelo and Meyer lemon production. Sugar cane is also grown in the Valley.

Being so close to the Mexican border, we weren’t quite sure what to expect and whether we should be worried about safety. A few other RV’ers we met elsewhere were quite adamant that this was an “extremely bad” area and we should be extremely careful. We also heard the same from family and friends back in the north east. Well, none of these naysayers had ever been to the area and boy are they wrong!

Within a few hours of our arrival at Bentsen Palm Village RV Resort in Mission, our qualms were put to rest. The truth is, folks, this area is just anytown USA and conversely to what you might think, actually has lower crime rates than many other popular USA towns and cities. In fact it is probably even more safe here due to the strong presence of the Border Patrol, State Troopers and local Police who seemed to be everywhere. After talking to several locals we learned that most border runners aren’t even Mexican, but South American, and even if they make it across the border they are just looking to get out of town as fast as possible with minimal human contact. It was not uncommon to see Border Patrol officers parked along the side of the road, patrolling the neighborhoods or even having breakfast at a local restaurant. And at any hour of the day or night, helicopters frequently flew overhead, maybe searching for any border runners or just letting wannabees know that they were being watched. 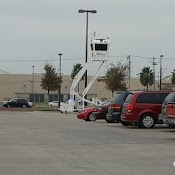 Plus here, like many other places, two story mobile police observation towers are often seen perched in retail parking lots. Known by their brand name, SkyWatch, these high-tech, hydraulic-powered, climate controlled towers (which cost $80K or more) are regularly seen here. Darkened windows prohibited us from knowing if someone was actually manning the tower but according to this article, they often are manned by trained volunteers. It’s number one purpose is to act as a deterrent, perhaps if a would be criminal sees one of these in a parking lot, they will move on. We actually felt safer here in Mission and McAllen than we have in other large cities!

Bentsen Palm Village RV Resort (review coming) is a lovely, well maintained resort offering wide, big rig friendly sites and rates that are one quarter to one third what you would pay in south Florida for a similar resort during snowbird season. The sites are fairly large and a few (but not most) were separated by dense vegetation providing very good privacy. The resort has standard back-in sites along the periphery, but the center of the park is an unusual arrangement of four sets of concentric “rings” of pull thru sites (see sattelite view below). Each ring has a common area feature at its center. We preferred the increased privacy of the periphery sites, ours backed up to a cow pasture. At about the same latitude as Fort Myers, FL, the climate here is also similar to south Florida.

Bentsen Palm is more than just an RV resort – it is a part of a 2600 acre master planned resort community surrounded by 3,000 acres of protected wildlife habitat.According to their 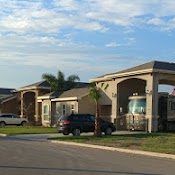 literature, Bentsen Palm Development states that this is “where natural beauty is cultivated to restore the soul, the habitat, and the wildlife it protects”. It not only includes the 245 site, gated RV Resort but also encompasses several other individual communities. The gated communities of Tanglewood and del Oro offer homes for growing families, 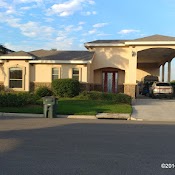 while both the RV Resort and Retama Village (also a gated RV resort) are over 55 communities. Retama Village is an ownership resort with offerings of a basic pad and 12 x 24 fully plumbed coach house all the way up to a large 4 bedroom home with a covered RV “port”. Many owners at Retama Village rent their sites and we heard that privately arranged good deals are to be had for long term winter stays.

One big selling point for staying here is that it is far enough away from the hustle and bustle of the cities of Mission and McAllen to have a natural environment, but still close enough to all the necessary conveniences. And because it is adjacent to the Bentsen Rio Grande Valley State Park, the World Birding Center Headquarters, and the Mission Butterfly Center, 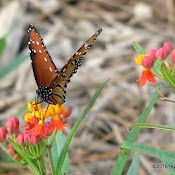 this resort is one of the nation’s top resorts for 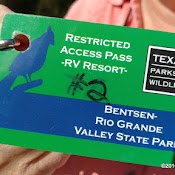 birders, butterfly enthusiasts or anyone who just loves being outdoors and in tune with nature.

Included in the large list of amenities offered at Bensen Palm is free admission to the State Park (normally a $5 per person fee) and the Butterfly Center (normally a $10 per person fee). Just stop by the office to pick up a daily pass. During our stay here, we frequently used the State Park pass. Passes are also available for the Butterfly Center but at our arrival were not yet available, $10 is the regular per person entrance fee. More about our visit to these great places coming up in a future post. 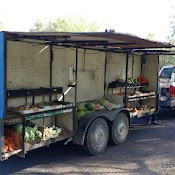 And then there’s the weekly visit by a mobile produce truck. Every Tuesday afternoon around 3:00 pm, a honking horn signals that the produce truck has arrived at the Club House. You name it, they have it! Fresh tomatoes, cucumbers, peppers, potatoes, carrots, scallions, ruby red grapefruit, bananas, vanilla extract, lemons, limes, watermelon, pineapple (a machine is used to peel/core it for 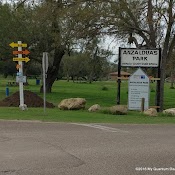 you) and so much more is available for sale at fairly reasonable prices. How convenient is that?

One relatively unusual amenity here is a fully equipped woodworking shop. Rob would have made good use of that if we had been here for a longer stay. In addition to all of their other amenities, Bentsen Palm Resort offers 3 hour pontoon boat tours on Tuesday, Wednesday and 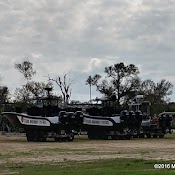 Thursday afternoons on the Rio Grande River. Unfortunately during Christmas week, the couple who give the tours were away visiting family for the holidays. We tried scheduling a tour during the following week but the weather didn’t cooperate. Oh well! After so many years of watching western movies with cowboys fording the Rio Grande, we both were anxious to see the river so one day we took an excursion, stopping at the Anzaldouas Park where there were a lot of opportunities to see the river. Guess we both expected this wide, roaring river! Well, it certainly wasn’t like that at all. Anyone wanting to cross the border (which was in the middle of the river) would have a fairly short swim! No wonder there is such a large presence of Border Patrol here. 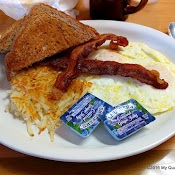 During our stay, we headed over to Diaz Diner in Mission for breakfast a few times, but other than that we didn’t eat out much while we were here. One day it was pretty late, almost lunchtime, so while Rob had breakfast (standard fare of eggs, hash browns and bacon for $4.99), I had the Diaz Mexican Plate ($8.49) which consisted of one taco, 2 cheese enchiladas and one bean chalupa served with rice and refried beans. Good food and excellent service, all at reasonable prices. Breakfast or lunch are served here all day. 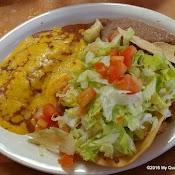 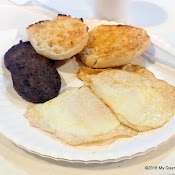 Speaking of breakfast, it is served at the RV Resort daily Monday through Friday in the club house. Only $3 for eggs, sausage, toast or english muffin and coffee. Only issue for lazy morning people like us is that it is served from 7:30 to 8:30 a.m. But luckily we managed to move fast enough once before we left. Can’t beat the price!

So many things to do – we loved it here! Stay tuned to read about all that we did!