When we arrived at Twin Oaks RV Park in Elko, GA, we didn’t have any specific sightseeing plans during our two night stay. But since we had a full day to explore, on a whim, we decided to visit the Andersonville National Historic Site located approximately 26 miles from the resort. 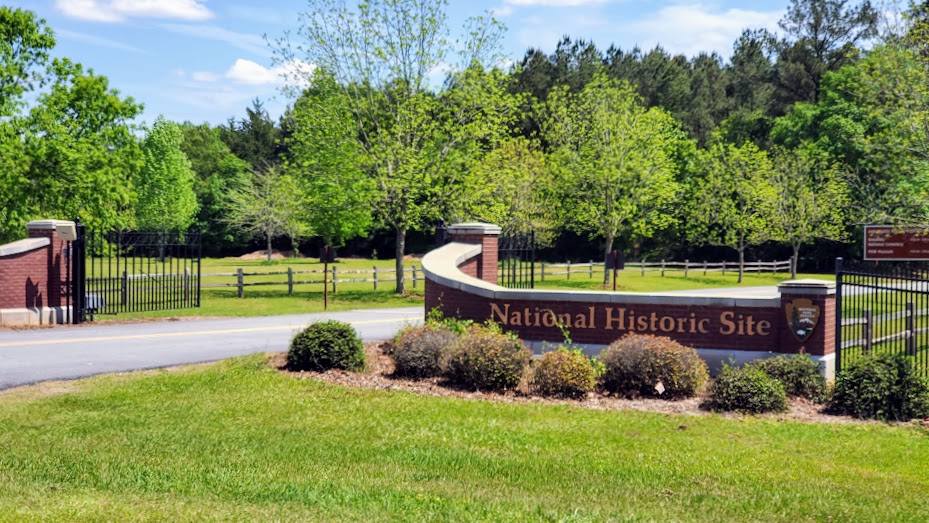 Established in 1970, this historic park has three main features: the National Prisoner Of War Museum which serves as the Visitor Center, the Prison Site (once known as Camp Sumter after the county that it was located in) and the Andersonville National Cemetery. Open daily from 8:00 am until 5:00 p.m. EST except for New Years Day, Thanksgiving Day, and Christmas Day, admission is free. Maps of the park, cemetery and the museum can be found on the National Park Service website.

We were fortunate that we arrived there mid-April – the park had just reopened with reduced capacity on April 1st.  Similar to other national parks, Covid restrictions were in place throughout the park. Restrooms were open but the theater in the Visitor Center was closed so unfortunately we didn’t have the opportunity to view the two films which would have provided us with an introduction to the story of the Andersonville Prison and the experience of American prisoners of war. And, of course, at the time of our visit, everyone was required to wear face masks in the visitor center/museum and practice social distancing when outdoors.

Opened in 1998, the National Prisoner Of War Museum & Visitor Center is solely dedicated to interpreting every aspect of the American prisoner of war experience for all wars. 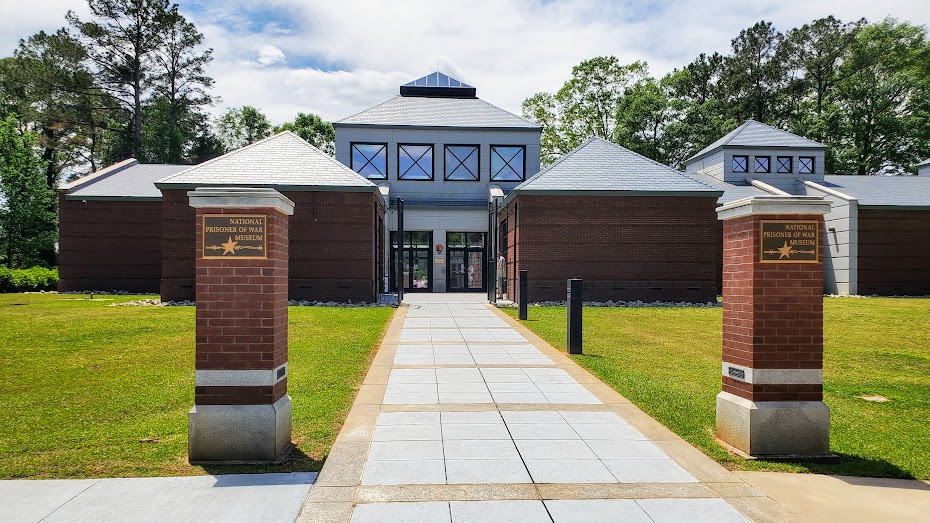 According to this website, the Prison Site’s reason for existence was “to provide an understanding of the overall prisoner of war story of the Civil War, to interpret the role of prisoner of war camps in history, to commemorate the sacrifice of Americans who lost their lives in such camps, and to preserve the monuments located within the site.”  Nearly 800,000 American men and women have been held as prisoners of war throughout our nation’s history (about 40,000 are still alive today). 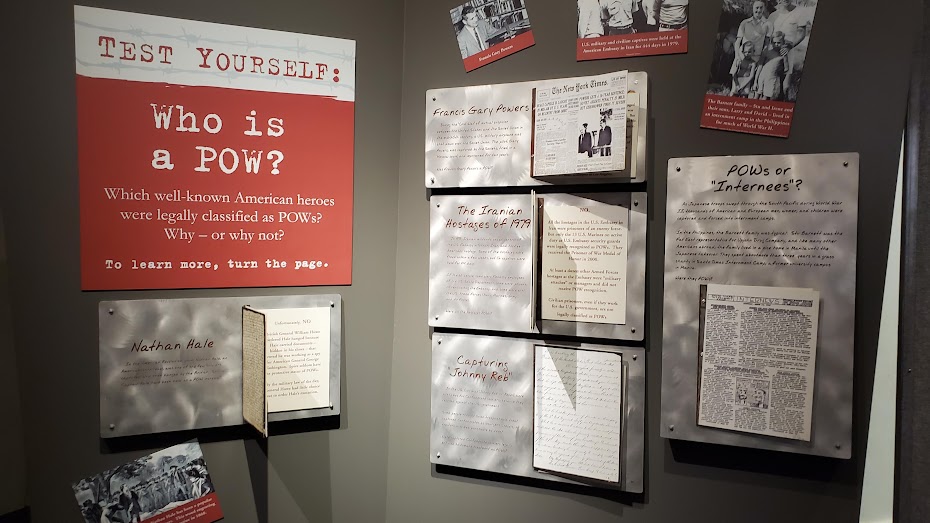 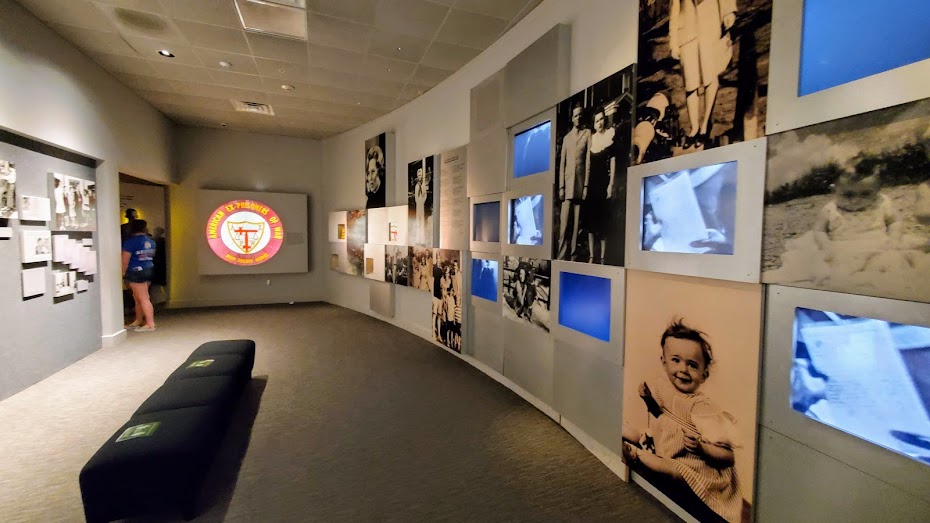 From the American Revolution up through the recent wars in the Middle East, the exhibits include information panels, photographs, letters, diaries, personal items donated by POWs, and actual artifacts from prison camps. 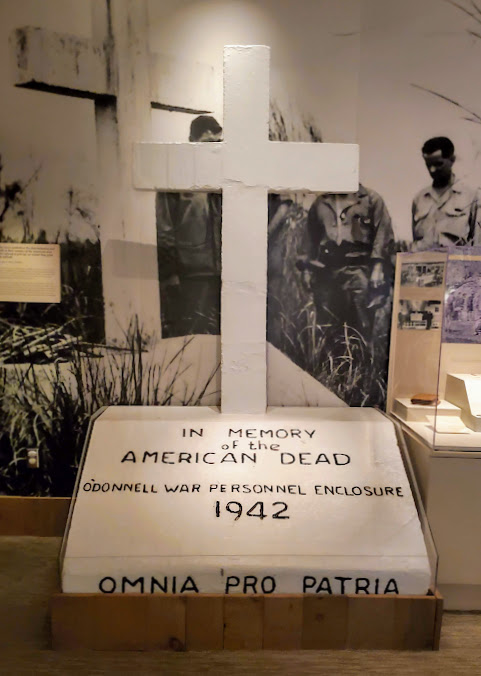 There were also audio and video presentations consisting of archival footage and interviews with veterans who served in World War II up through the Iraq War. 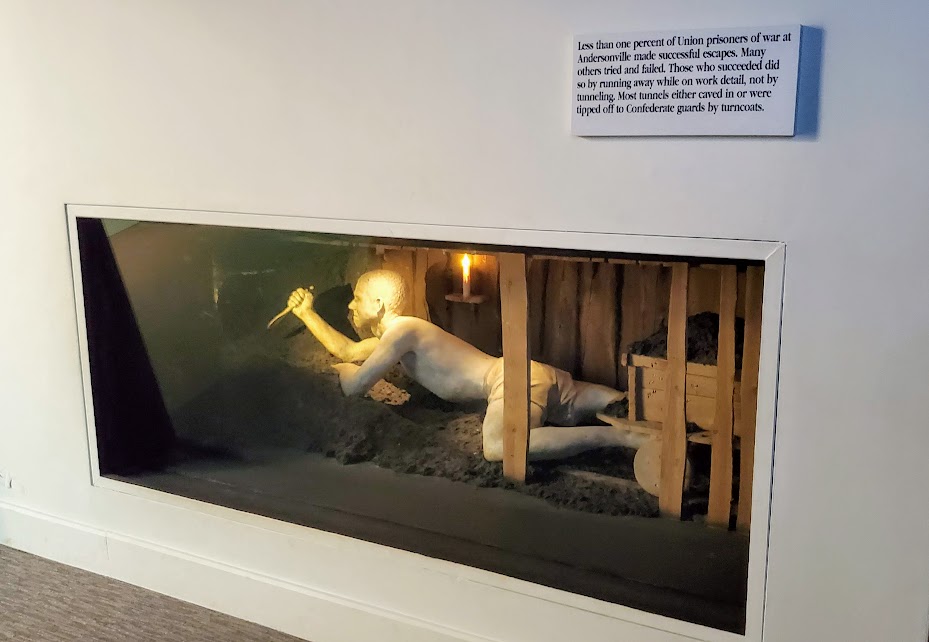 Being a Saturday, the museum was fairly crowded so we didn’t spend as much time as we would have liked perusing all of the exhibits. Instead we made our way out the rear door of the museum to the commemorative courtyard which was created to provide a place for quiet contemplation. A massive brick and bronze sculpture titled “The Price of Freedom Fully Paid” represents the suffering of those held as prisoners of war. 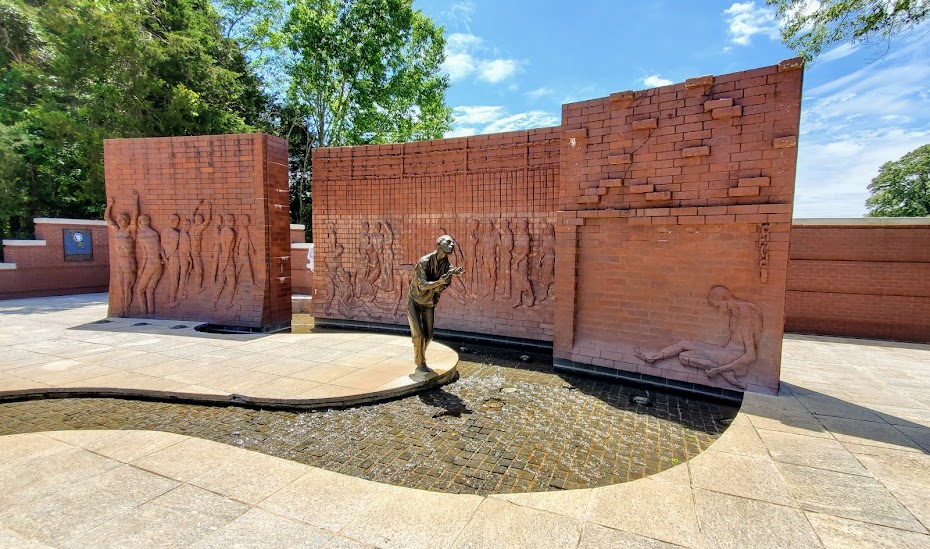 Bronze tablets placed by various organizations can be found in the memorial courtyard and along the commemorative walkway north of the museum. 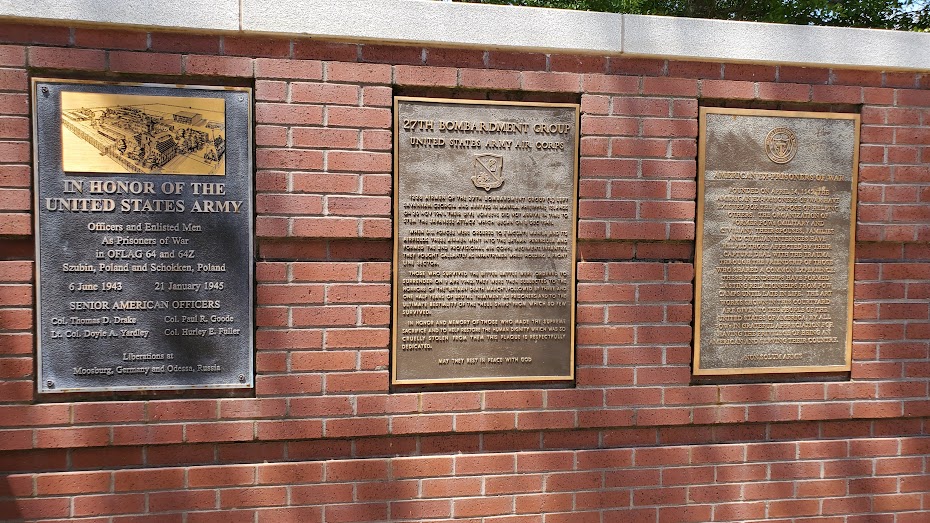 Approximately 200 feet south from where we were standing was the site of Camp Sumter and the partially reconstructed prison stockade. But more about that later.

We were able to take advantage of a very interesting, one hour self guided driving tour around the prison site and the cemetery which we accessed on-line using our phones. For those visitors who might not have access to the on-line tour, it is also available by CD or audio cassette at the museum information desk from 9:00 a.m. to 3:15 p.m. daily.

For a period of 14 months from February, 1864 to the end of the Civil War in April 1865, Andersonville served as a site of a notorious Confederate prison site (housing Union prisoners). The Confederate government chose this location for the prison site due to its isolation, available water, surrounding farms and forests and access to the railroad depot in the town of Andersonville.

Here are some highlights of the driving tour…

Starting out on the one way paved tour road, we passed several monuments which were erected between 1901-1934 by state commissions and private groups in memory of fallen comrades. 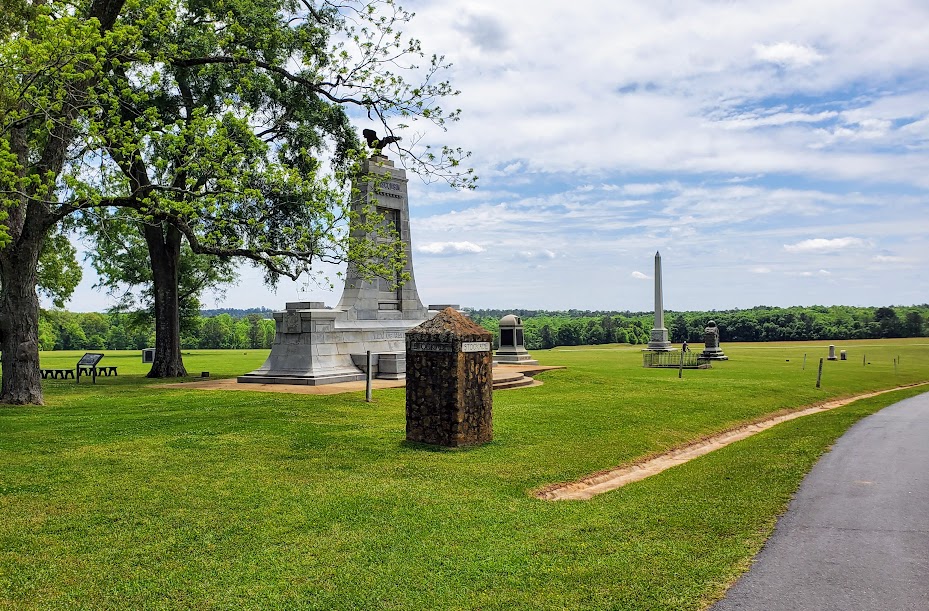 The North Gate is where over 45,000 soldiers and civilians entered the stockade as prisoners of war. 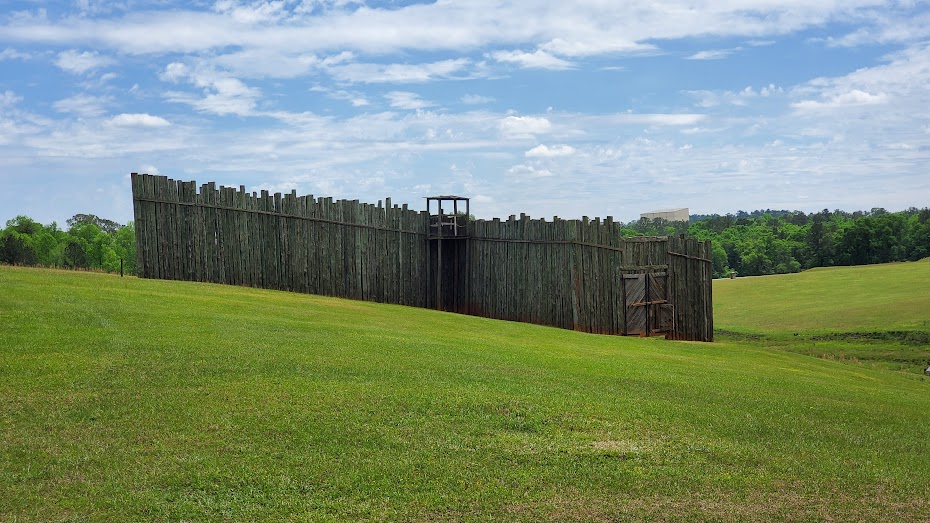 A storm in August of 1864 revealed a spring that had accidentally been buried during stockade construction. The spring was considered “providential”, thus the name Providence Springs, by the prisoners who were dying of thirst or sickened from drinking contaminated water. The monument was erected in 1901 by survivors who brought their families back to experience the life saving water. 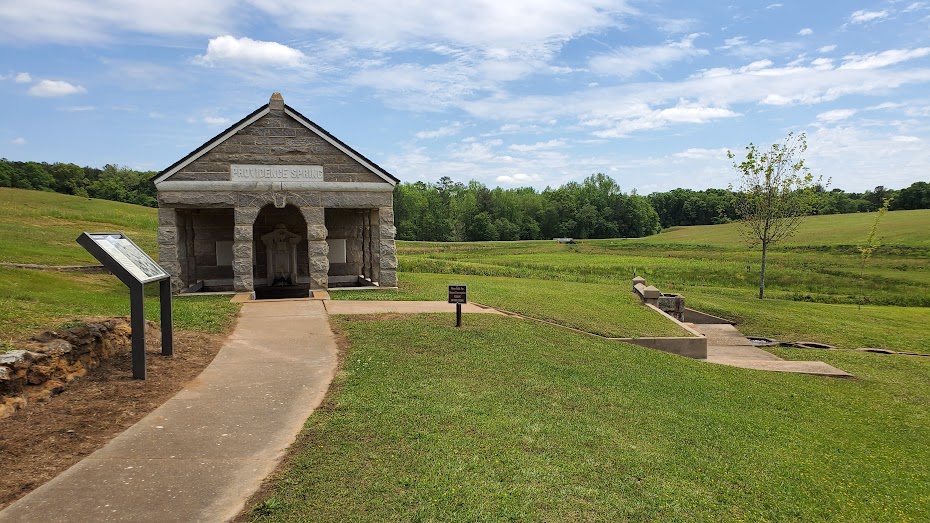 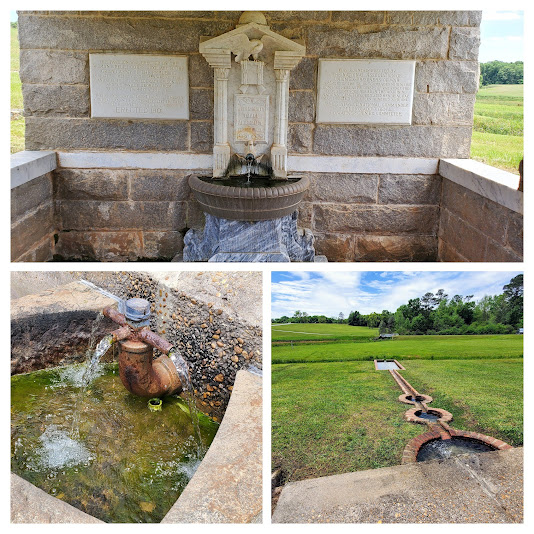 Initially in February of 1864 it was built to hold 10,000 Union prisoners on 16 1/2 acres enclosed by a 15 foot high stockade. The prison was supposed to include wooden barracks but the inflated price of lumber delayed construction so the Yankee soldiers imprisoned there lived under open skies, protected only by makeshift shanties called Shebangs which were constructed from scraps of wood and blankets. 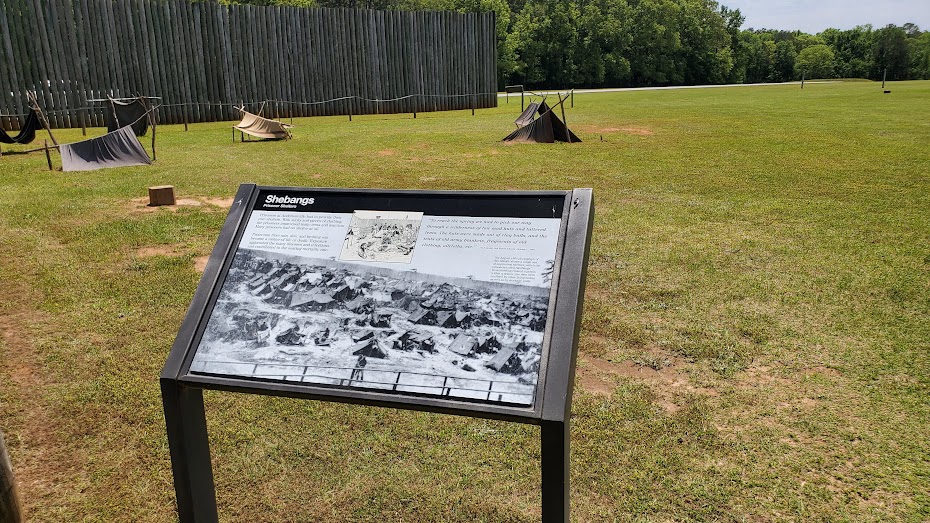 By April of 1864, the population swelled to more than 32,000 men and the prison was expanded to 26.5 acres. Even with that expansion, each prisoner was only allowed a space of about 5 feet by 6 feet. Many of them were wounded and starving, in deplorable conditions with rampant disease, contaminated water, and only minimal shelter from the blazing sun and the chilling winter rain. Over the 14 months, 45,000 Union soldiers were imprisoned there; over 13,000 died as a result of the horrific conditions. 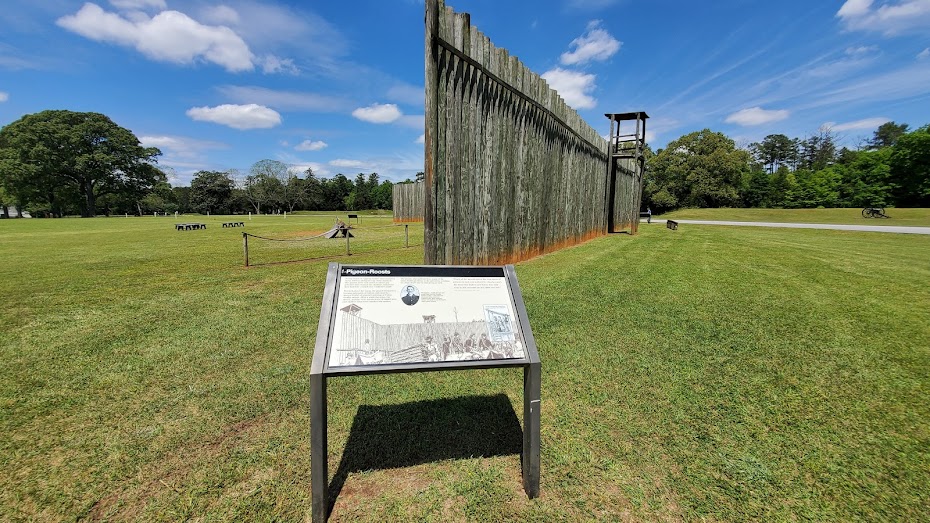 When Robert E. Lee surrendered to Ulysses S. Grant on April 9, 1865, the war ended. A month later, Swiss born, Henry Wirz, the commander of Andersonville was arrested, convicted and sentenced to be executed by hanging for the murder of soldiers incarcerated at the prison during the war. The 41-year-old Wirz was one of the few people convicted and executed for crimes committed during the Civil War. His execution has always been controversial. Was he a mass murderer through his neglect of his prisoners or was he a scapegoat?

From the prison, we continued the driving tour to the cemetery….more about that in our next post.