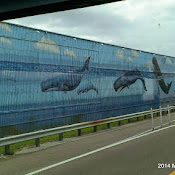 Weren’t we just there you ask? Yep, we were. So why did we return again? Well, we like it there. And as you’ve probably figured out we don’t like being tied to a schedule. But with Topsail being a very popular park, most of the sites are booked a year in advance. However, way back in April of 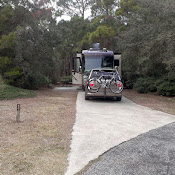 2014 when I saw that one of the sites that we liked there was available, my long term planning gene kicked in and we decided to take a chance and book that site from February 22nd to March 8th 2015.

When we stayed here back on February 6th, 2015 it was because an unexpected vacancy became available and the timing was right as we headed west. The plan at that time was to cancel the February 22nd reservation, go to Rainbow Plantation in AL, then to Gulf State Park, followed by a visit with our friends, Jim & Joan in New Orleans. Well, for assorted reasons we once again changed our minds – cancelling instead our Gulf State Park reservation (for a full refund) and nixing the trip west to New Orleans. Instead we would keep our original Topsail reservation. So on February 22nd, we left Rainbow Plantation, retracing our steps back to Santa Rosa Beach. 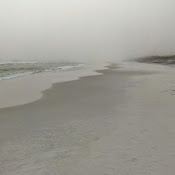 So why do we keep coming here? Besides all the reasons given in our previous post, it has now become my favorite place to walk. Who knew just a few short months ago, I would have cared or even 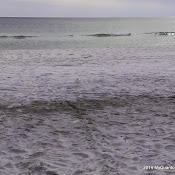 had a favorite place to walk but here we are 874,700 steps or 393 miles later, and walking has become my favorite past time (almost obsession) and an integral part of my daily life.

Every day here (weather permitting) the beautiful wide flat beach was my destination. I’ll admit that sometimes it has been hard to stay motivated. Days when I was tired and didn’t feel like hoofing it, days when the weather wasn’t so great, and days when we were busy and trying to squeeze in a few hours of walking seemed totally unachievable. Forget the 10,000 steps, just do 1,000 I would tell myself. Once I made the 1,000, I chided myself saying what the heck, I can do more than that, stop being such a wimp! It was so easy here even on my laziest days to find the motivation, knowing the beach was my destination, almost like it was

beckoning me. My “ho hum I don’t feel like it” feelings would always be quickly erased.

As I took each step closer and became enveloped in the fresh ocean air, I would become more and more exhilarated – suddenly I was truly motivated, even wanting to walk further than usual.  Any other landscape tends to get boring but not here – each day and even hourly

the seascape would change depending on the time of the day, the color of the water, the ever shifting sands and the force of the winds controlling the turbulence of the waves. How could anyone not feel motivated to walk in this type of scenario?

And always there was some form of entertainment. An occasional dolphin or two swimming by, playing in the surf, the pelicans dive bombing into the waves, and the obnoxious seagulls parading on the beach scrounging for food. The constantly busy and oh so cute little Sanderlings chasing the waves in and out, probing for tiny prey in the wet sand left by the receding waves. I could watch these little birds for hours! Hmmm, with those short little legs I wonder how many steps they walk in a day? 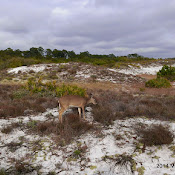 Several times as I passed, deer would be grazing on the vegetation next to the boardwalk. Not sure why I had to take pictures of them – guess they are much prettier (and less annoying) here on the 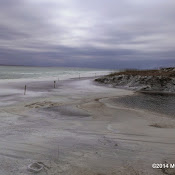 dunes than they were in our front yard destroying our plants and shrubs back at the house.

The beach was always fairly deserted due to the chilly temps, only a few people walking and an occasional fisherman. Really too cold for all but the hardiest swimmers. But that was okay, I loved having the majority of the beach to myself, thoroughly enjoying the solitude when I was walking alone (if Rob decided not to join me). Not sure if I would like it as much here in the warmer months when there must be wall to wall people and kids romping in the water and sand. 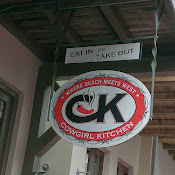 When we arrived, new friends from our previous stay, Betsy and Nancy were still here but Deas and Jen had left for GA to visit family – sorry we didn’t get a chance to see them again. On Tuesday after our arrival Betsy invited us as well as another 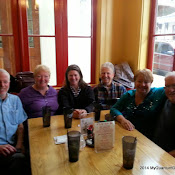 couple, Jim and Debbie, to go to lunch at the Cowgirl Kitchen & Market, located about 30 minutes away in Rosemary Beach.

Cute little place with a Tex/Mex menu! Rob had the Grouper Sandwich ($12), a seasoned filet of grouper with 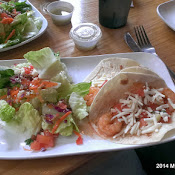 a cilantro lime sauce, topped with mango pico on a grilled kaiser bun

served with salad or soup (he had the chicken tortilla soup) and I had the Drunken Shrimp Tacos – two flour tortillas with grilled gulf shrimp in a chipotle salsa with shredded cheese served with a house salad ($12). Both were good although I think we were so busy yakking and having fun, I barely tasted the food! 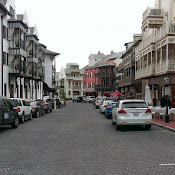 Since we had never been in this neck of the woods before, after we said goodbye to everyone, we walked down to the beach (hmmm, like maybe it’s different than other beaches we have seen before), 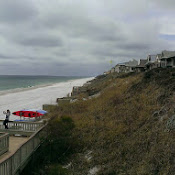 then around town. Cute place, lots of shops and boutiques, all with a European architectural motif.

On another day, we went to The Perfect Pig Cafe & Market which had excellent reviews for breakfast. “Praise the Lard” is their motto! We (and Google Maps) didn’t realize that there was a new location at the intersection of 30A and 393 at Gulf Place about 5 miles away. Instead we drove all the way to Seagrove which was about a 20 minute drive but that was okay since it was a nice day. It was a pleasant drive.

Charming, eclectic place with an 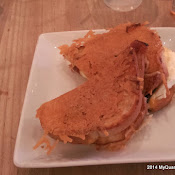 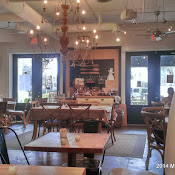 interesting menu. I especially liked the chandeliers – the huge one hanging in the center and the wine glass chandeliers off to the side. And of course all the pig decor. Although it’s not shown on the website, we had the Parmesan Crusted Grilled Cheese Egg and Sugar Bacon Sandwich ($8.95). Yummy (especially the bacon)! I noticed on one of the shelves that they had bags of Bacon Coffee – guess you can get your morning coffee and bacon fix without taking out a frying pan! Between 5-6 p.m. their dinner entrees are 1/2 price. Unfortunately, we didn’t get a chance to go back. 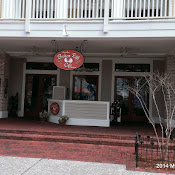 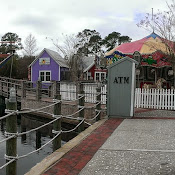 array of delightful shops, as well as restaurants of all flavors, bars, and nightclubs. Note that you must stop at the gate and get a pass from security to enter this complex.

For breakfast/brunch, I had the Simple Salmon which was sweet southwestern seasoned salmon filet with onions, peppers, garlic cloves, mushrooms & asparagus over sauteed spring mix, 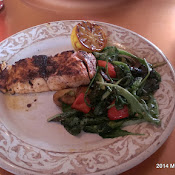 topped with chipotle jicama slaw & served with brûléed lemon. I had had this last year at the Grayton Beach location where the 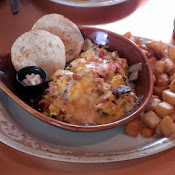 presentation of the dish was much more appealing. Apparently the kitchen had forgotten the chipotle jicama slaw which should have been sprinkled on top of the dish. After I had started eating, our waiter brought over a separate dish of it. Despite the flawed presentation, it was still good. Rob had the Lakeshore Scramble which was scrambled eggs, baked bacon, onions, mushrooms and ham with Cheddar Jack cheese. He would have had the corned beef hash again but this location didn’t have it on the menu which seemed strange. 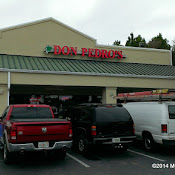 Since there aren’t many breakfast restaurants in the area that we like and/or have reasonable prices, Rob was converted to a “let’s go out to lunch” person (made me happy) so we tried a few of the local joints. For something different one day we went to Don Pedro’s Mexican Restaurant. Just a little place in a strip mall. Rob had the Chiles Releno ($8.25), a poblano pepper stuffed with cheese served with rice and bean and I had the Chiles Releno Combo ($9.25) which included one beef chile releno and one chicken taco served with rice and beans. Food was okay – wouldn’t rush back there again. 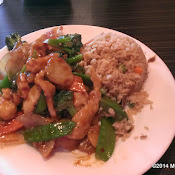 On another day we went to Jin Jin 1, a Chinese restaurant located nearby (note there is a second location, Jin Jin 98). I had the 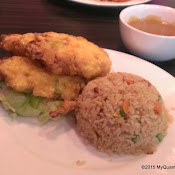 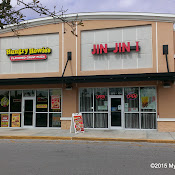 with Betsy and Nancy.

And then of course there was one last Stinky visit! Stinky’s Fish Camp, that is, also with Betsy and Nancy where Rob and I both shared an order of Lemon & Garlic Butter oysters, followed by their appetizer portion of Crawfish Pie. Delish as usual!

The day before we left was busy. Neighbors who owned a 5th 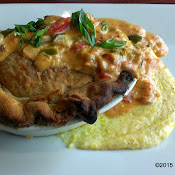 wheel were contemplating trading over to a Class A coach. Since they had never seen an Entegra, we invited them over so they could see our floor plan. They loved it! We wish them luck in their search. If they buy an Entegra, maybe we should get a commission! Then Betsy and Nancy came over because they had questions about their Entegra Anthem which is on order and due for delivery in April. So it was a busy Entegra kind of day!

Despite all of our playing, dining out and socializing, a few projects and items on Rob’s to do list were 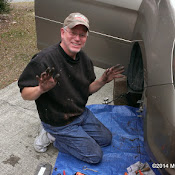 accomplished. One day he spent a few hours replacing the front brakes and rotors on the van. He had fixed the problem with the emergency brake and put new pads and rotors on the rears back at Rainbow Springs, but didn’t have time then to work on the front brakes. He also changed all the batteries on our 12 TST Truck 507 tire pressure sensors (8 for the coach, 4 for the van). Then he modified the wiring and installed a switch over the driver side sofa so now the overhead task lighting and the ambient sconces can be turned on or off separately. Never made sense that both came on together. Woo hoo three things knocked off his list! 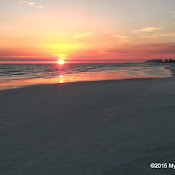 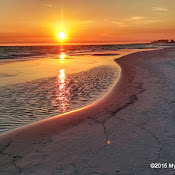 The night before our departure, we were treated to one last gorgeous sunset on the beach! What a spectacular finish to an enjoyable stay!

Our next stop isn’t too far away. Stay tuned to find out where we went next.