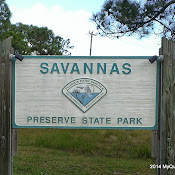 To get the lay of the land, our first stop was the Education Center which features interactive exhibits, live animal exhibits, displays of local history, a gift shop, self-guided tour booklets, and information on many of Florida’s State Parks. A treasure trove of information about the Preserve and surrounding area. 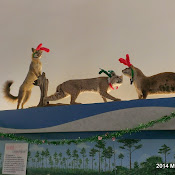 Neat displays! Especially liked the animals (non-living kinds) all decked out for Christmas! Since it wasn’t busy, we were able to talk at length with the ranger who was telling us that as a volunteer, 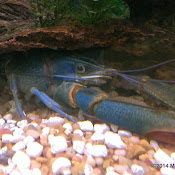 he gets to stay in one of the nine campsites (not open to the public) nearby free of charge. He’s been a volunteer for a number of years at many of the State Parks so he spent some time giving us tips on how to get our foot in the door. The benefit here is no “rent & utilities” for as many months as you volunteer for working only about 20 hours per week per couple. That’s a pretty light schedule that can really help out the budget and provide a nice means of giving back!

Of particular interest in the display area was the Common Yabby, a freshwater Australian crustacean which was a very lovely shade of blue. Obviously not native to Florida – we were told that this was a donation from 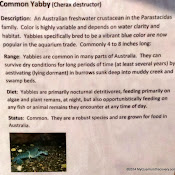 someone who owned it and could no longer keep it. Kids must love seeing it. Can these be cooked and eaten I wondered? Who wants to eat something that is blue? Yes, they can be cooked just like a lobster and they even turn red when cooked. Who knew!

Besides the Yabby, there were a variety of snakes (ew!), fish and a couple of Florida Box Turtles on display. 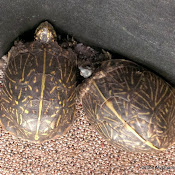 The park has approximately 8.5 miles of multi-use  trails – the white trail (5 miles), blue trail (2.1 miles), red trail (1.1 miles) and the yellow trail (1.0 miles). After looking at all of the displays, we asked the ranger about which trail would be the best, concerned after seeing a sign that said that some of the trails were wet and muddy. He explained that a 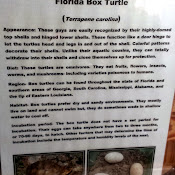 savanna’s source of water is from rain and that it is not fed from a spring or river and the last two years have been very wet so there was about 4 to 5 inches of natural water in the savanna, making the trails muddy in some areas. For a dry walk, he suggested that we drive through the nearby gate, heading to the canoe ramp where we could park – the start of the white trail was nearby which we would take for a short distance until we could pick up the yellow trail. That trail would take us over two wooden bridges where he said we would have very pretty vistas of the savannas.  And we would most likely see lots of wildlife!

Before we left the Center, we paid what we thought was a fee which turned out to be a little confusing. There was a sign on a box that said that the fee was $2 per person which should be put in the provided envelope to get a vehicle tag. So we paid $4. Didn’t seem very confusing yet but when we arrived at the gate, there was a sign that stated the fee was $3 per vehicle. On their website, the fee is $3 per vehicle. No big deal but not sure why there was a difference. 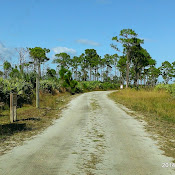 So off we went, through the gate and driving down a dirt road until we reached the canoe ramp where we parked the car. 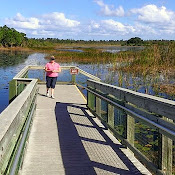 Pretty! No non-human wildlife here though! Just a couple of ladies sitting and yakking!

We walked a short distance back to the trail head for the white trail. It was a pretty easy flat walk along a shadeless trail but difficult to walk on as it was rutted by vehicle tracks and wild hog wallows. 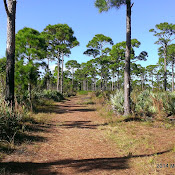 Before long, we passed by a sign describing the bat houses near 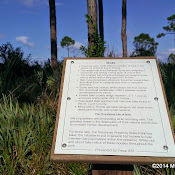 the side of the trail.

When the trail divided with the white trail heading off to the left, we took a right along the yellow trail. I kept whining at Rob because this place was supposed to be teeming with wildlife – we didn’t 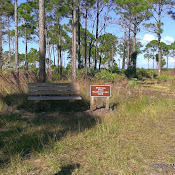 see any, not even a bird. He told me to be careful of what I wished for – we didn’t really need a wild, feral hog to come charging out at us! No sooner had he said that when I heard a hiss, causing me to jump. There on the side of the trail was a good size turtle. We didn’t realize it at the time but I think this was a gopher tortoise which is a threatened species. 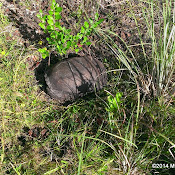 Whew, that’s good that it wasn’t anything nasty! My whining stopped!

Eventually we came to the first bridge. There was a couple sitting on a bench who asked us if we knew the names of the white 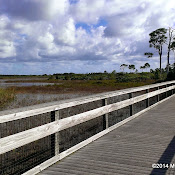 flowers that were in bloom in the water a good distance from the bridge. Unfortunately we didn’t. Hard to see in the photo – Rob didn’t have our good camera with us so he couldn’t zoom in to 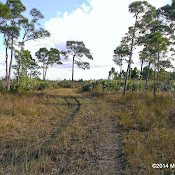 get a better photo. The man explained that several people have told him that these flowers were very rare but he couldn’t remember the name. We suggested that the ranger in the Education Center should know. Don’t know if he had any luck with that.

We continued on. In a few places the trail was a little muddy so we had to hop over those spots. Still no wildlife (oops, I did say I had stopped whining about 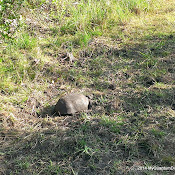 that, didn’t I?). When we finally got to the second bridge, we decided to turn around and head back. Mr. /Mrs. Tortoise was in the same place on our return. This time he/she was a little friendlier and didn’t bother to hiss at us.

Finally we made it back to the car. It was a nice day for a two mile, relatively uneventful walk. Perhaps next time we could try one of the other trails.

When we returned back to the campground, the place had cleared out. Bye, bye, everyone! Ah, it was so peaceful that afternoon and night. We spent the rest of the day getting ready for our our departure on Monday and just plain ol’ lazing around. Next stop, another familiar place – Riverbend Motorcoach Resort in LaBelle, FL where we will be for the month of December.