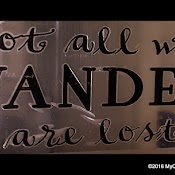 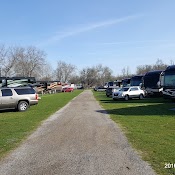 Oh, my what a fun and exhausting four days! Besides treating their customers like royalty Entegra sure knows how to entertain! This time the occasion being the Springfest Homecoming rally. From Monday, April 18th to Thursday, April 21st, it was a whirlwind of activities. Festivities started on Monday with about 84 Entegra coaches registering at the Elkhart Campground (we checked in on Sunday to avoid the rush). How cool seeing each row of the campground filled with assorted models and colors of Entegra coaches! Cost for everything was just $150, just slightly more than the campground rate for the three nights. 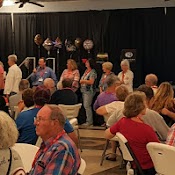 And of course, it was great meeting up with old friends and making new ones. That night there was a Welcome Reception at the campground hall with dessert being served along with an open bar. After a few opening remarks from Entegra executives, we had to earn our way by playing a wild game of Trivia. Somehow or other our table ended up winning first place and each couple at the table won a gift card. Rob and I won $50. Hmmm, maybe I can put that 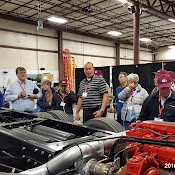 Following a catered buffet breakfast at the campground each morning, the next two days were filled with Tech Talk workshops, 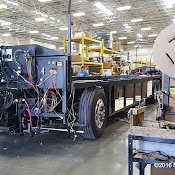 vendor presentations, an in depth factory tour, driving lessons (for those that signed up) and an optional visit to the Mennehof Museum (which we didn’t go to since we had just been there in October) and/or an optional Shipshewana shopping excursion (been there, done that too). Regular tour buses provided transportation from the campground to all events. Entegra also had several techs on site to work with the owners on any service issues (we had a moderately fogged window replaced at no charge – remember our bus had its third birthday on April 12, 2016). 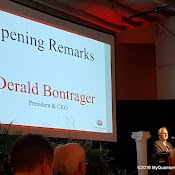 It was in the evenings though that the real fun began! Tuesday night was a wonderful dinner at the Elkhart RV/MH Museum & Hall of Fame. As we entered the event hall, a photographer took pictures of each couple which were later given to us as souvenirs. To begin the festivities, opening remarks 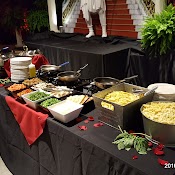 were made by Jayco owners, Derald Bontrager, President and CEO and Wilbur Bontrager, Chairman of the Board.

A nice touch was that someone from the Entegra family, whether a technician, Director, VP, or CEO sat at each table to mingle, dialog and listen to their customers. We were fortunate that Jason Bontrager (Derald’s son and grandson of the original founders of Jayco), Director of Delivery Services and his wife were sitting at our table. Super nice, fun people and very interested in hearing what we had to say! Everyone kept Jason so busy he barely had time to eat his food! 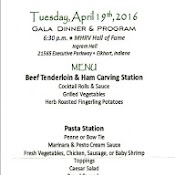 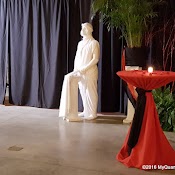 Speaking of food, oh my what a spread! Multiple food stations were set up at one end of the hall to accommodate the huge menu as shown in the photo of the menu on the left. Not only was the food plentiful and super delicious but they also offered an open bar! Did I mention that there was a lot of food there?

During dinner, music was provided by a string quartet while everyone was intrigued by two very realistic mostly motionless human “statues” dressed in Roman attire. How do they manage to stay so still for so long? Some 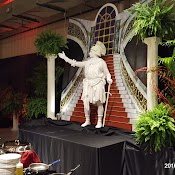 people didn’t realize they weren’t real statues and were quite surprised when one of them would move into a different pose. Too cool!

After dinner, Tadd Jenkins, President of Jayco Motorhome Group talked about the history of Jayco/Entegra and the success of Entegra. Since Jayco took over the assets of Travel Supreme in 2008 and rebadged the product with the Entegra brand, 2600 Entegra coaches have been produced and are now on the road (compared to about 800 in 2013) with the Cornerstone capturing a whopping 30% market share in the 600 HP segment and ranked #1 seller. (Since then in May, Jayco, the parent company 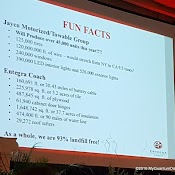 of Entegra, announced that they recently reached a milestone – 1,000,000 Jayco units of all types have been built since the founding of the company in 1968.)

Following Tadd, Pat Carroll, VP of Product Development officially announced the 2017 Entegra models with his very entertaining presentation What’s New For 2017. He wrapped up his talk with Fun Facts providing some interesting stats. This article in RV Business sums up Springfest activities.

By the end of the presentation, everyone was eagerly anticipating seeing a 2017 Entegra roll in through the huge door on the side of the banquet room enveloped in a smoke screen. Well, the huge door did open, there was a smoke screen and in came…gasp…gasp…wait for it….a bright yellow 1960’s vintage Volkswagen van decorated with huge colorful flowers. Two hippies (we learned later they were Entegra employees dressed as flower children) jumped out, pretending they were lost and performing a little comedy skit. Too funny! But where are the new Entegras? Rest assured we were quickly told that the new 2017 models were right outside 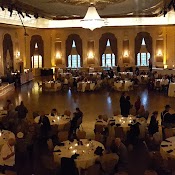 the door. Ever see over 150 people try to cram into 3 motorhomes all at once? Think it put the Guinness World Record for the number people that can fit into a phone booth test to shame! 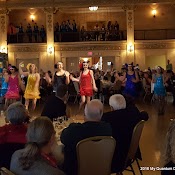 On Wednesday night, the fun continued – it was a blast from the past with a Roaring Twenties themed dinner at the Palais Royale in South Bend. Months prior to this event, we were told that prizes would be given for the best costume. No, don’t look for me in my flapper dress or Rob 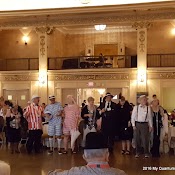 in his pin striped gangster suit in any of the photos. Think we left our 20’s outfits back in storage in RI. But not to worry for those of us who didn’t dress up, hats and boa feathers were provided at the door!

Quite the place! Another open bar and a lot more food. More tenderloin roast, chicken, baked tilapia, potatoes and veggies. Not quite as much as the night before but still a lot. After dinner, entertainment was provided by several groups of young people performing the Charleston and other dances (one group had been contestants on So You Think You Can Dance) followed by lessons for everyone. There was even a band playing dance music 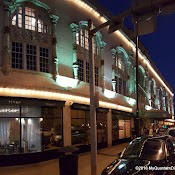 all night. Once dinner and the costume contest was over, the gaming tables opened (we were given chips when we arrived). A fun evening but everyone was pretty exhausted from the night 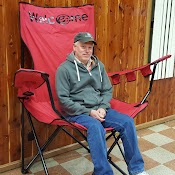 before so it was an early evening for a lot of people (including us).

Friday morning after the buffet breakfast at the campground, there was a suggestion session lead by Tadd Jenkins, president of the Entegra division. Lots of constructive ideas and feedback provided by the Entegra owners. Having been owners since 2013, we know firsthand that Entegra really listens to what their customers are saying and has also made several significant process and organizational changes to improve the product.

Rather than leaving the Elkhart Campground that afternoon, we opted to stay for an additional night just to catch our breath. On Friday morning, we went back to the service facility at “Camp Entegra” in Middlebury because it was the weekend and plenty of free sites would be available. While there we talked with Owen (our service advisor from the previous week) and spent some time with an Entegra salesman looking more in depth at the 2017 models. Hmmm, there sure are a lot of great new features on the new Entegra’s, especially the Aspires which now have a chassis and feature set equivalent to a 2016 Anthem. Nothing wrong with window shopping, right? We stayed at Camp Entegra one more night before heading to our next destination! Stay tuned for where we went next!