Note that photo captions are not displayed in the email version of our posts, for a more complete viewing experience, click the post title to view it directly on our blogsite. 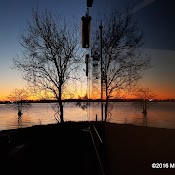 The renters on our site at Riverbend in Labelle, FL were scheduled to depart on March 11th, so as we checked out of Gulf State Park in Alabama, the plan was to make our way back to Riverbend to check things out and stay “free” for a few weeks (free because the rental income from peak season covers most of the annual expenses incurred to own this lot). We were definitely looking forward to another visit to our Southern home and to see how our new plants were doing!.

We left Gulf State Park on March 1st, so we had 10 leisurely days to make the 635 mile journey. Our first stop would be at Eastbank (see our review and dashcam video), an Army Corps of Engineers campground in Bainbridge, GA, located northwest of Tallahassee and just over the FL/GA border. Eastbank is also just over 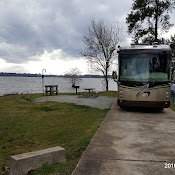 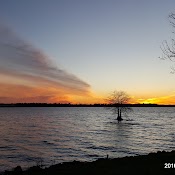 the time zone boundary and back in eastern time – at least technically it’s in eastern time! As we discovered during our stays in 2011 and again in 2012, this is the land of the confusing times!

Despite my never knowing what time it was (and annoying Rob by constantly asking him), it was nice to return to this beautiful, peaceful lakeside setting! And we were mostly happy with the site we had 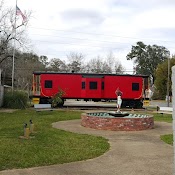 reserved – it was site C-31, the exact same site we stayed on in 2012 in our Fleetwood Discovery! This is a great direct waterfront site, its only downside is its unshielded proximity to site 32 and can feel a bit lacking in privacy, particularly with tenters camping there.

One good thing about the nearby town of Chattahoochee is that there isn’t much to see or do. Yep that’s right, we were looking forward to just relaxing after a somewhat busy two weeks in Gulf Shores. Watching the gorgeous sunsets, taking walks, searching for a few geocaches in town, singing (not) around the campfire and relaxing – that’s what pretty much occupied our time during our four night stay here. 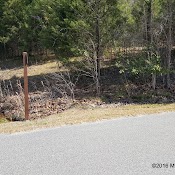 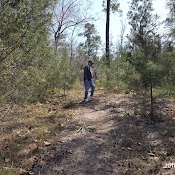 Although we were momentarily overcome with a spurt of ambition on one day so we decided to hike the rather hilly trail (unmarked) from the campground to the access road leading to the Jim Woodruff Lock and Dam, a hydroelectric facility which forms Lake Seminole. The outflow from the dam is the Apalachicola River which flows into Apalachicola Bay in the Gulf of Mexico (you know where all those awesome Oysters used to be). The inflow that creates Lake Seminole includes the Chattahoochee and Flint Rivers. All are navigable as there is a lock alongside the dam. 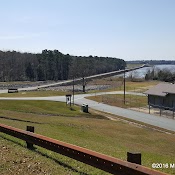 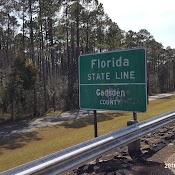 and the road had no sidewalks, so we aborted that idea, opting to drive there instead.

Interestingly, the dam is located entirely within the state of Florida. However, the extreme southern part of Lake Seminole right at the dam is located in Georgia and in the part of the Florida panhandle that wraps around the southwest corner of Georgia. When we drove from the campground (which is in GA) to the dam we crossed over into Florida for less than a mile. 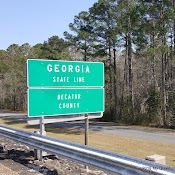 We were surprised by the level of water in the spillway, much higher than it has been during our previous stays. Many of the sheltered fishing tables were underwater as was a portion of the ramp which is a favorite spot for the fishermen!

After hanging out there for a bit, we drove across the river to the other side of the dam 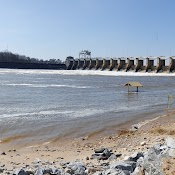 where we wanted to walk one of the nature trails but it was closed – everything was flooded there as well. Apparently back in December, the area received over a foot and a half of rain causing the river to reach its third-highest crest of 73.66 feet. The U.S. Army Corps of Engineers at Lake Seminole had to keep all gates on the dam open, releasing more than a million gallons of water a second downstream. Guess the area still hasn’t recovered as yet. 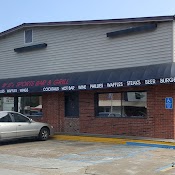 One morning we went to the only game in town for breakfast, WBs Sports Bar & Grill which supposedly served breakfast all day. When we walked in a little after 10:30 a.m., we were surprised to see people carrying plates of food from a buffet table. Not breakfast food – on Fridays they have a seafood buffet beginning at 10:30 a.m. Even though we still could have ordered breakfast from 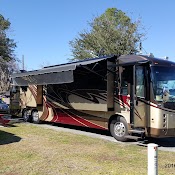 the menu, we just didn’t like the vibe of the place so we left, returning to the coach to cook our own breakfast.

On March 5th, we left East Bank, headed for Lake City Campground (see our review) in Lake City, FL. It would be a 2 hour straight run on I-10. This was just a quick overnight stop so nothing noteworthy to mention about our stay here. Kind of a rude awakening leaving such a lovely next to nature campground for a much more suburban setting. 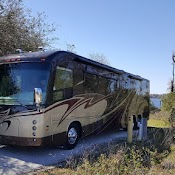 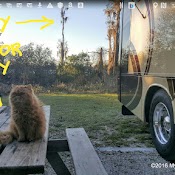 The next day, we set off for Lake Louisa State Park (review coming soon) in Clermont, FL, another state park that we have been to in the past. It was a 2-1/2 hour uneventful drive on I-75, the Florida Turnpike and US 27. Upon arrival we checked in at the office, then made our way to site #30 where we settled in quickly.

What a great site! Located near the boardwalk to the fishing pier on Dixie Lake with a large 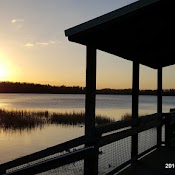 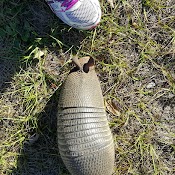 living area, only one set of neighbors on the driver’s side of the coach and lots of vegetation to provide privacy.

How surprised we were when an armadillo quickly came around to greet us! Such odd creatures they are. Definitely not afraid of us – he got so close to my sneaker I thought he might take a bite out of it. Glad we had seen him during the day, we might have been a bit nervous sitting by the campfire wondering what kind of creature was rustling around in the dark.

Here are a few facts about armadillos that I didn’t know:

That wasn’t our only experience with nature. Behind our site near the water’s edge was a huge osprey nest where Mom and Dad were busy flying back and forth, taking turns 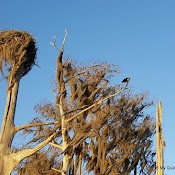 tending to the unhatched eggs.

Except for a breakfast out at Papa’s Diner where we had an average reasonably priced ($4.79) breakfast and a trip to BJ’s to stock up on a few groceries, we spent most of our time in the 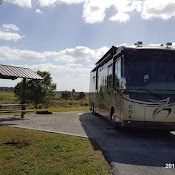 campground, enjoying nature and doing our usual walking and biking.

On the morning of March 10th, we began the last three hour leg back to Riverbend. Well OK not exactly. Our renters still had our site for 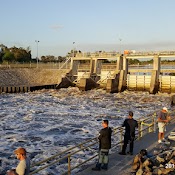 another day, so our destination for this last night was Ortona South COE (see our review) in Moore Haven. When we made our reservation at Ortona South, availability was limited so we were unable to snag a riverfront site. However, our site #9 was plenty long for us and very pleasant with a wide expanse of prairie (complete with cows) behind 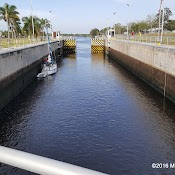 Although the gates to the locks were closed by the time (4:00 p.m.) we arrived there on the 10th, the next morning when we headed out for a walk a little after 8 a.m., they were open so we were able to walk along the spillway and even across the lock gates themselves! We watched a sailboat go through the locks.

By now, via our network of spies at Riverbend, we had discovered that our renters had in fact left our site the previous week 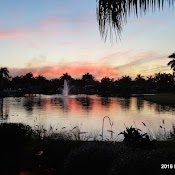 to pick up their new Prevost but never came back. So we knew we could head out early on the 20 minute journey back to Riverbend. Our plans were to stay there until about April 1st. What a lovely sunset we had on our first night back!

Stay tuned for more about our stay at Riverbend!