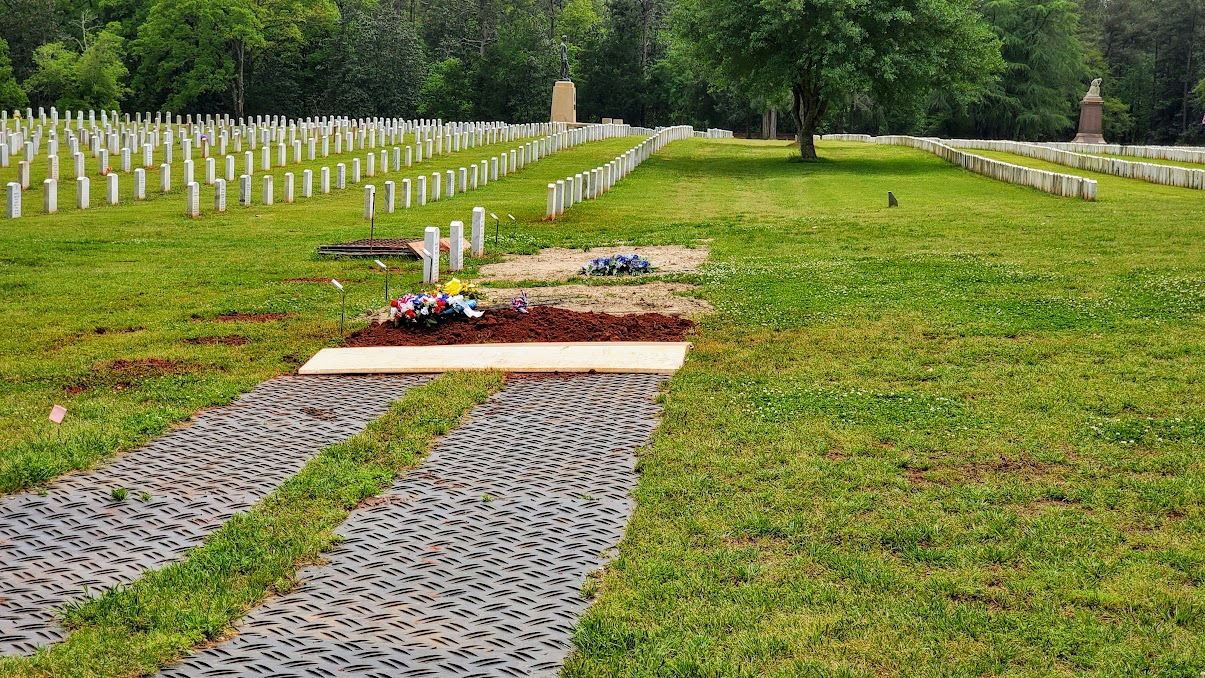 Veterans, their spouses and minor dependents who have been on active duty for 180 days and have not been dishonorably discharged can request to be buried here. Visitors are reminded to be respectful of any funeral services that may be taking place at the time of their visit. 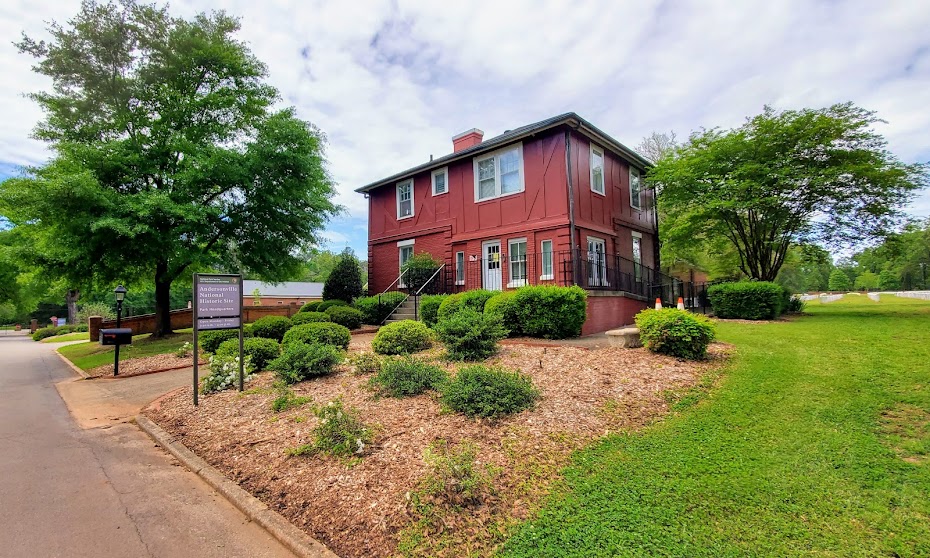 At the entrance is the Georgia Monument erected in 1976 which shows the universal plight of prisoners of war, regardless of the era of the war in which they fought. Rows and rows of marble headstones, over 13,000 of them, each marked with the name of the person who died in the prison and the state he was from filled the landscape in front of us. The prisoners headstones are only inches apart. As the death rate escalated to over 100 per day, pine box coffins were abandoned and the bodies were buried shoulder to shoulder in the trenches.  Each gravesite was marked with a wooden board inscribed with a number, later replaced by marble headstones. 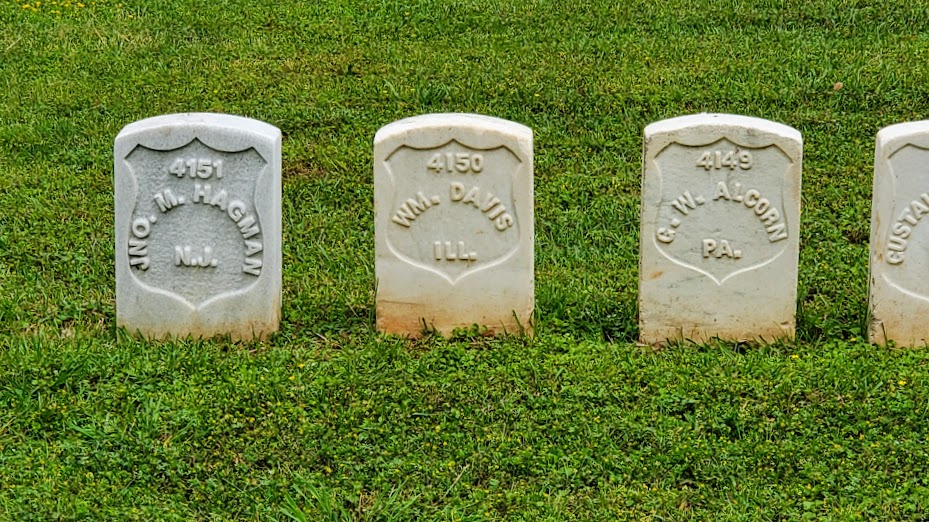 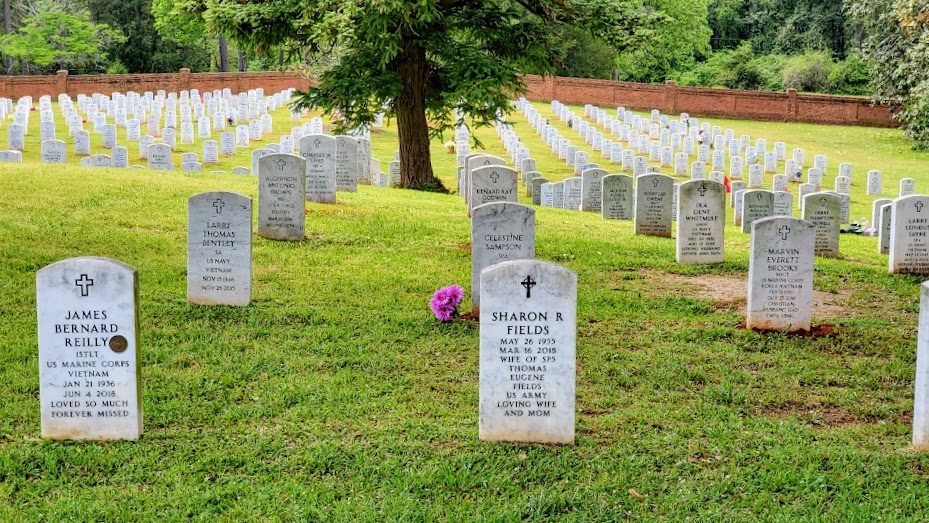 Thanks to the efforts of nineteen year old Dorence Atwater, only 460 out of the 12,920 prisoners buried at Andersonville remain unknown. It was interesting to learn that Dorence had been paroled and worked in the hospital where he kept the death register for most of the time he was at Andersonville. In addition to the two copies he was required to keep, he kept his own secret copy of the list which with the help of Clara Barton, was provided to the War Department. That list provided the opportunity for each gravesite to be identified. 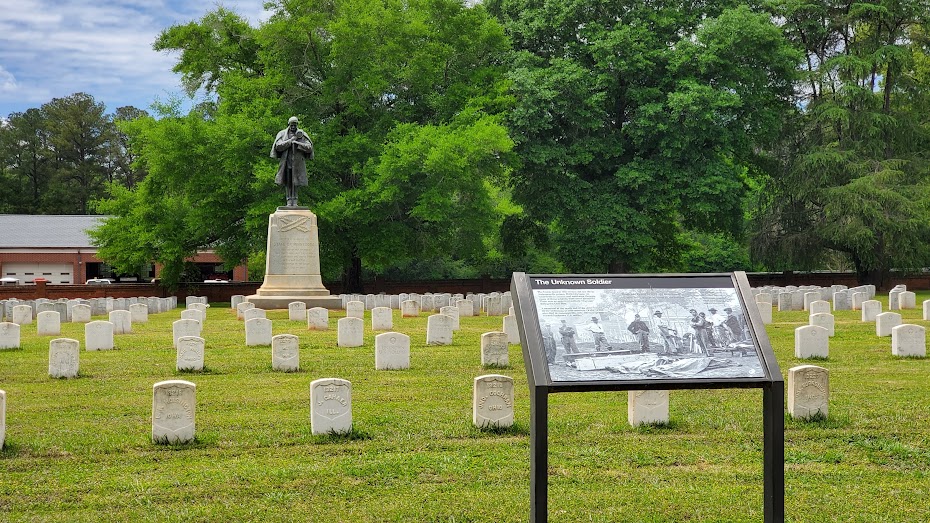 Interspersed among the rows of headstones are monuments, nine of which commemorate Union soldiers who were imprisoned or perished at the Andersonville prison. The other three monuments are dedicated to the broader themes of the park, commemorating POWs in all or other wars as well as unknown soldiers. The New Jersey Monument which was dedicated in 1898 is the oldest one – the inscription of “Death Before Dishonor” is common to five monuments. It points to the fact that the prisoners could have been released if they had agreed to fight for the Confederate cause.

New York had more soldiers held at Andersonville than any other state. The newest monument, Stalag XVII-B, erected in 1989, honors all the prisoners held in German prison camps in the European theater of operations. 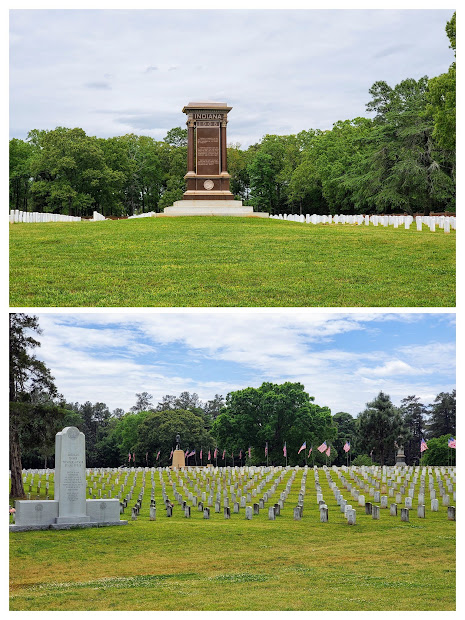 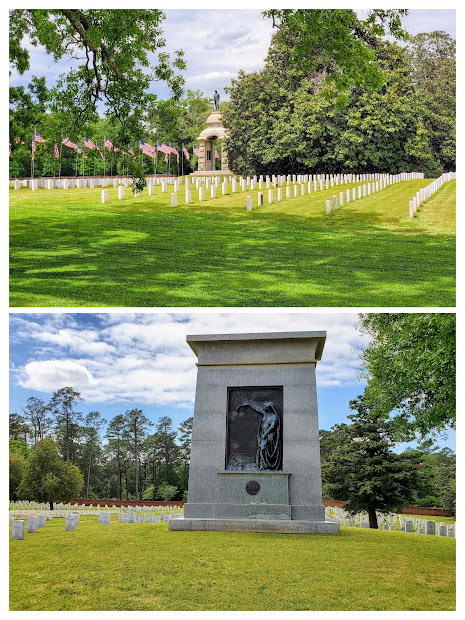 The cemetery rostrum is used for special ceremonies. The area in front of it is the memorial section which commemorates soldiers whose bodies were not recovered from the battlefield, were donated to science, buried at sea or who were cremated and their ashes scattered. 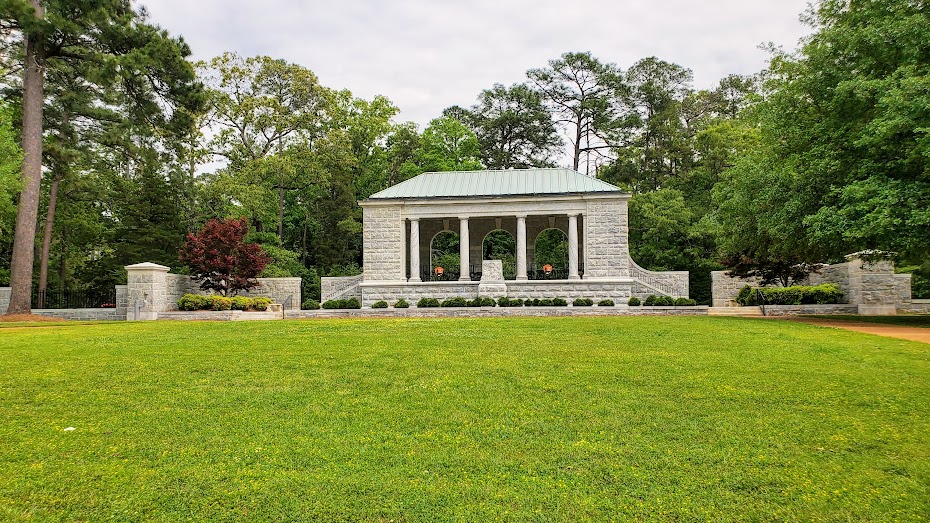 These six prisoners were members of a gang known as the Raiders who roamed the prison yard, bullying, robbing, and even murdering other prisoners. Eventually, with the blessing of Commandant Wirz, the prisoners formed a police squad called the Regulators, arrested the Raiders, and tried and hanged the six ringleaders. The other prisoners did not want them buried next to those who honorably served.

Other notable graves included a unique one for a soldier from Maine, Lewis Tuttle. This particular headstone has a stone dove atop his marker. It’s a mystery as to how, when or why the dove was put there.

Several graves have the designation “USCT” on them. These are the graves of African-American soldiers, many of them formerly enslaved who fought in the Union Army. Anyone can search the “Find A Grave” website to see if a particular person is buried at Andersonville (or any cemetery).

So glad that we made the time to visit the site, not only was it an educational experience but it also was a very emotional and sad one. It was difficult learning the story of prisoners of war throughout American History in the museum and hearing about the deplorable conditions that the Union soldiers faced in the Confederate prison and then seeing the rows upon rows of gravestones representing all those who died there. It is easy to forget that behind each of the 20,000 headstones was a person, a person with a family, a person with a unique story of loss, mourning, and sacrifice. Some of these stories are captured in a video series titled “A Story in Stone” created by the park staff.  The entire day was a sobering reminder of the sacrifices made throughout history so that we Americans can enjoy the freedoms that we so often take for granted today.

Before heading back to the coach, we drove through the little town of Andersonville. 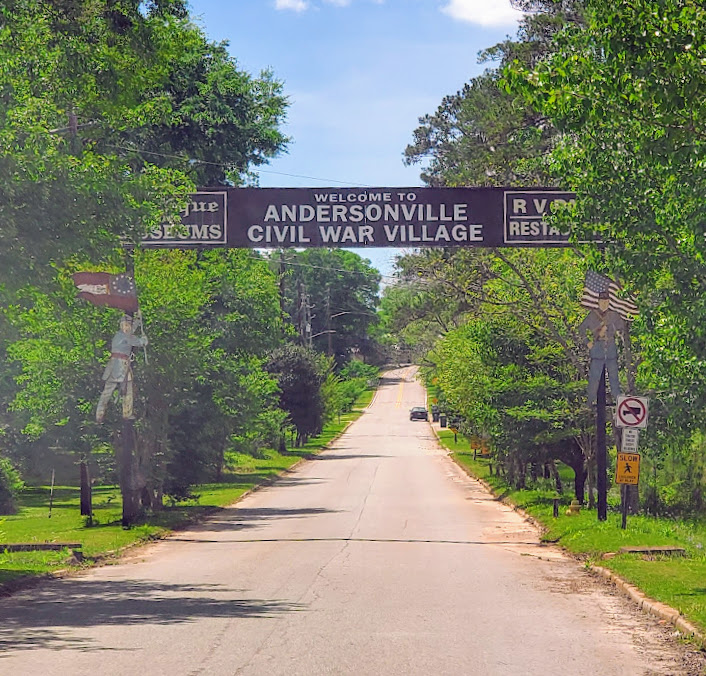 Originally named for Mr. John Anderson who was a Director in the South Western Railroad at the time it was extended from Oglethorpe to Americus in 1853, the name was changed in 1855 to Andersonville. Until the establishment of the prison, the town was totally dependent on agriculture. Little was changed over the years until 1968 when the large scale mining of kaolin, bauxitic kaolin, and bauxite was begun by Mulcoa, Mullite Company of America, which turned 2,000 acres of scrub oak wilderness into a massive mining and refining operation. Today, the company ships more than 2000 tons of refined ore from Andersonville each week.

In 1973, Lewis Easterlin, the long-time mayor and a group of concerned citizens decided to promote tourism in the town by turning the clock back and making Andersonville look much as it did during the American Civil War. As you can see from the pictures below, they were successful at that!

In the center of town is a monument to Captain Henry Wirz who, as mentioned previously, was executed after the war ended. 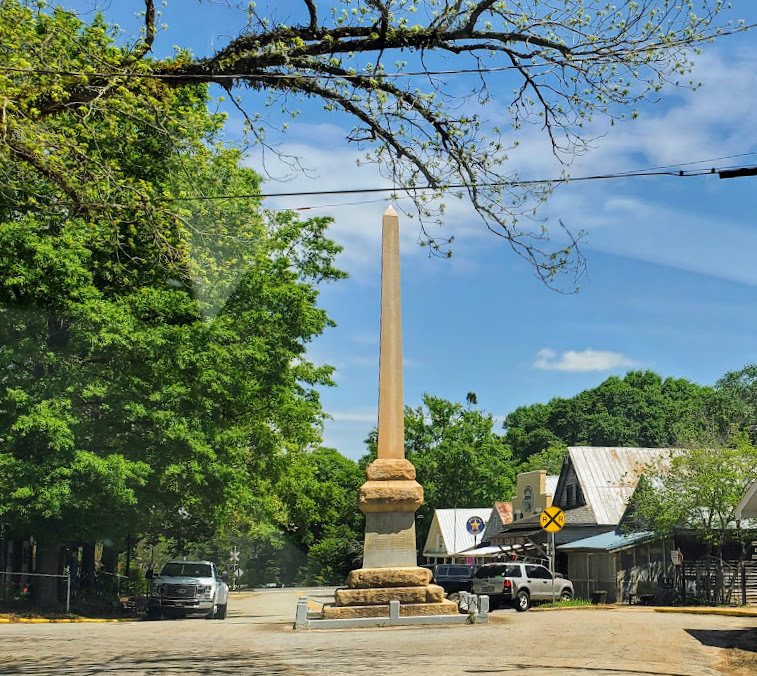 Although we didn’t stop to explore the town, there appeared to be several places worth exploring. Places worthwhile visiting are the Visitor Center, located in the train depot There is the Drummer Boy Museum, Easterlin’s Country Store, the Village Hall and several antique stores. 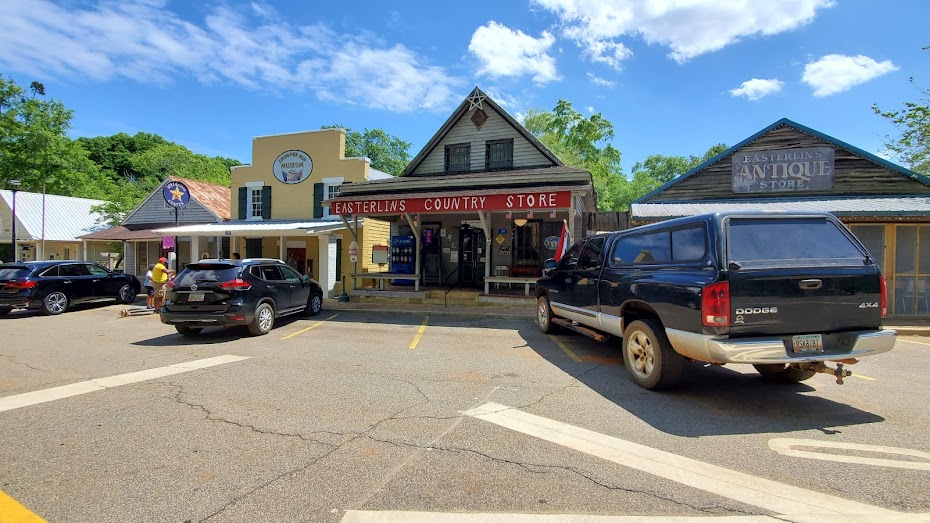 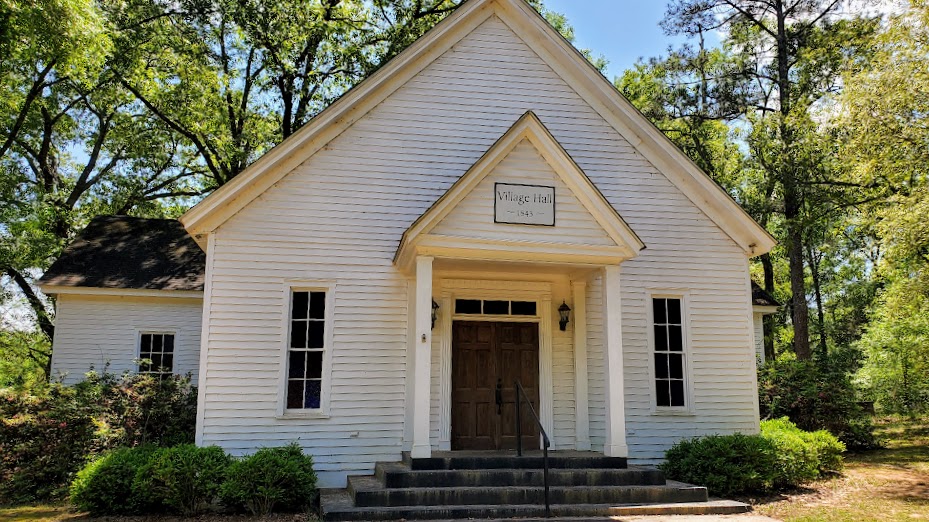 The next day we would leave headed for our next destination. Where would that be?