This post documents doubling the capacity of the house battery bank on an Entegra Aspire by simply adding two more batteries to an existing compartment. It should also apply to 2017 and newer Insignia models. It’s a technically easy project but is a bit physically challenging due to the weight of the batteries and the tight working conditions.

For 2017 Entegra made some substantial improvements to their entire line of coaches but in particular to the Aspire which now comes standard with more upscale items such as Independent Front Suspension (IFS), a diesel fired Aquahot, a 17000 pound front axle and bigger tires to name a few (and partly why we “upgraded” from a ’13 Aspire to a ’17 Aspire). 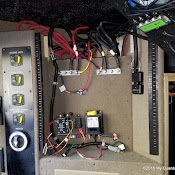 Also, across the board all coaches in the lineup got a much improved DC electrical setup with shut off switches and switchable breakers for all DC powered subsystems – previously it was not possible to completely shut off the inverter and some other subsystems without disconnecting cables. Photo left shows the midship located DC switch configuration. To the right of the switches behind a removable panel is easy access to other DC components and plenty of space for add-on equipment like solar panel controllers (Solar Panel pre-wire is standard on the Aspire and up). The small black box to the right of this compartment is the Magnum Battery Monitor (ME-BMK) interface that I added (more info on this below).

The house batteries on all Entegra models have gone from GC2 Golf Cart form factor, to extra tall L16 sized AGM’s (previously the Aspire got wet cells) and have been relocated rearward and centered in the chassis (side to side) in an enclosed compartment. 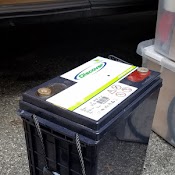 The new location is great news for weight distribution and even better news for those potentially thinking of going the Lithium route someday. The new battery compartment is comfortably nestled between the heated cargo area and the heated wet bay. That’s important because Lithium’s can be damaged if you try to charge them at below freezing temperatures. 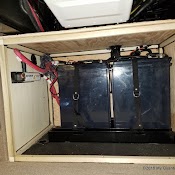 So OK great, it’s awesome that the 2017 Aspire/Insignia have the same house battery compartment location and size as the Anthem/Cornerstone, BUT the Aspire & Insignia only gets two L16 AGM batteries (390 amp-hours) while the Cornerstone & Anthem get four L16 AGM’s (780 amp-hours). The photo left shows the half empty battery compartment with the cover removed on our 2017 Aspire as it was delivered from the factory.

As previously mentioned, the battery compartment on all the 2017 Entegra’s is amidships, just forward of the wet bay. More or less under the Magnum inverter(s) and behind a carpeted panel fastened with 8 screws. This compartment is sealed and independently passively vented with a vent at the top and another in the floor.

Cost for this project will be about $1000-1200 for two L16 batteries, plus freight (varies), cabling ($25-$50) and labor (figure 4 hours minimum). If you pick up the batteries at the distributor you should be able to avoid the freight charge. If you are considering this upgrade you should do it as soon as possible after taking delivery of your new coach, it is not ideal to mix old and new batteries. 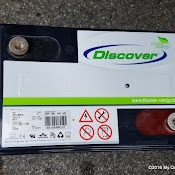 I ordered two Harris Discover EVL16A-A “Traction” batteries via National Indoor RV Center (NIRVC) in Atlanta. This is the same brand/model that the factory installs – it is critical all batteries in a common bank have identical specifications.

NIRVC was not able to buy them from the same distributor Entegra uses (due to volume commitments I think) so we got them from this distributor. They were identical to the Entegra installed batteries, except they shipped with M10 (3/8″) terminals instead of the M8 terminals (5/16″) that were requested and as were on 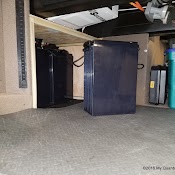 my factory batteries. You may want to verify terminal size of the factory supplied batteries before ordering – it is noted on the label. This was a minor inconvenience as I had to drill out some of the 5/16″ lugs I had purchased.

Each battery weighs about 125 pounds but come with rope handles and I was able to lift them into the cargo bay. It will be much easier if you have help (ask my back how it feels). But from there it is fairly easy to “walk” them over to the compartment. It helps that AGM’s are sealed, clean and spill-proof.

Photo right shows the above steps completed. This part of the project took less than an hour.

Now you are ready to make the electrical connections. This was not technically difficult but it was awkward and uncomfortable working in the 5 or 6 inch space above the batteries while stretched out in the cargo bay. While I was at it I also installed a shunt for the Magnum Battery Monitor Kit (ME-BMK). If you too are going to install the shunt, note that it will be much easier to physically mount it before moving the batteries into place. 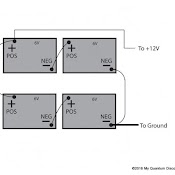 I installed it on the roof of the compartment to make cabling a bit easier. One side of the shunt connects to the NEG terminal of the battery bank, the coach side of the shunt gets all the cables that were originally on the NEG battery post (except for the Magnum temp sensor). My time on this part of the project was about 3 hours (not including making the cables) but was probably doubled because of the extra steps needed to install the shunt and other ME-BMK parts.

The image left shows how to wire the batteries. You will need 2 new cables to parallel the POS to POS and NEG to NEG, and two more cables for the POS to NEG series connection between the two 6 volt batteries. 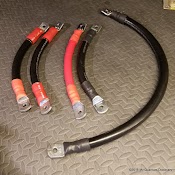 IMO this cable should be equal or greater than the load cables which are 3/0.

I used 4/0 marine cable for all the cables mainly because I had some left over from other projects. In the photo right all 4 short cables use about 7″ of wire and total about 9″ from lug hole to lug hole. Up to one foot long cables should probably work out OK. The lugs to cable connections were then sealed with adhesive lined heat shrink. The long cable shown was for the ME-BMK shunt so is not needed if you won’t be installing one. You can have the cables professionally fabricated somewhere such as GenuineDealz – if you buy the parts from them (which are priced competitively) they only charge $1 per cable for the assembly! I have my own big-ass crimper and made my own cables, but take my word for it it’s a lot of work and well worth the $1.

Note: make sure you connect the factory POS and NEG Coach and Inverter cables to opposing corners of the new battery bank (as shown in the wiring diagram) to ensure even loading of all cells. If you put both POS and NEG coach and inverter cables on the same pair of batteries the other pair will not get charged or provide power in a uniform manner.

Below are a couple of photos of the completed project, sorry it was very difficult to get a good shot due to the small working space. 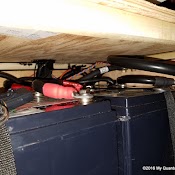 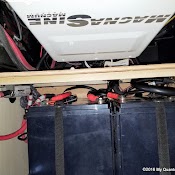