Well, this was an interesting experience to say the least! After exploring White Sands National Monument on our way back to Las Cruces we headed over to the White Sands Missile Range (WSMR) and the Museum, located about 35 miles away, traveling east along US 70E.

Upon arrival, signs instructed us to check in at the Visitor Center with our driver licenses, vehicle registration and insurance card in hand. Busy place. When we presented everything at the window, we were told they had to do a background check which would take a few minutes. Wasn’t expecting that, but the museum is located inside the base gates, we thought it was a separate facility. Unfortunately about eight contractors were in the queue ahead of us waiting to be approved and it took about 1/2 hour before our visitor badges were ready.

White Sands Missile Range was established in 1945, is operated by the Army and 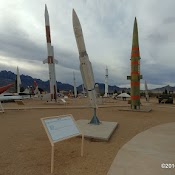 surrounds White Sands National Monument on all sides. It is one of six national ranges that support missile development and test related programs and is the largest overland military test range in 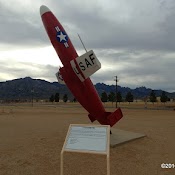 the US, occupying some 3200 square miles of southern New Mexico. Since 1945 the missile range has conducted more than 42,000 missile and rocket firings. Each year researchers at WSMR fire approximately 900 missiles for testing. It is the site of the first atomic bomb explosion code named Project Trinity – read about it on the National Park Service website. 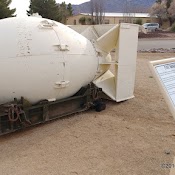 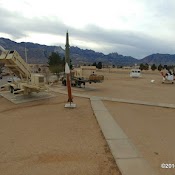 Admission to Missile Park (aka “the Rocket Garden”) and the Museum which is open everyday except Sunday is free. Missile Park covers one acre and is an outdoor display of more than 50 rockets and missiles once tested on the missile range including everything from the WAC Corporal and Loon (U.S. version of the V-1) to a Pershing II, Patriot, target drones and 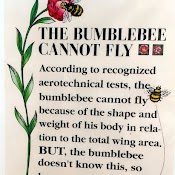 supersonic anti-aircraft interceptors, tactical battlefield bombs and nuclear city-blasters. Perfect place for fans of ballistic weaponry to visit. To view a list and photos of the missiles and rockets in the 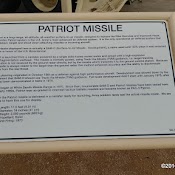 missile park use this link — Missiles in Missile Park.

If you do visit be forewarned only still photos can be taken and only if you shoot in the direction of the western mountains. No videos are allowed.

Inside the museum, there are all sorts of interesting and fascinating displays tracing the origin of America’s missile and space activity and detailing how the atomic age began. The accomplishments of scientists like Dr. Wernher von Braun and Dr. Clyde Tombaugh at White Sands are also detailed. Displays also include the prehistoric cultures and the rip-roaring Old 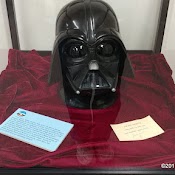 A Darth Vader helmet? At a Missile Range Museum? What was that was all about? Back in the 1970’s, Ben Burtt of Lucas Films donated the helmet to WSMR for the assistance he received collecting sounds of various missiles being test fired for the studio’s sound library, some used in the first Star Wars films. 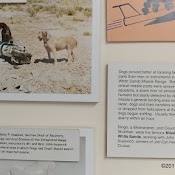 It was interesting to learn that dogs were used to find fallen missile parts or instruments in the 1960’s. So how did they do that? Before firing, critical missile parts were sprayed with squalene, a shark liver oil, odorless to humans but easily detected by dogs. After the missile’s general landing location was determined, dogs with handlers were 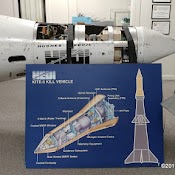 driven out or dropped by helicopters at the site. By sniffing, the dogs were able to find their quarry within an hour.

The museum wasn’t just about the military equipment used during the various wars. One room was a dedicated display of artwork depicting many scenes from WWII including the Battan Death March. One of the survivors of the March and a prisoner of war for three and one half years, Benjamin Charles Steele from Montana produced these drawings and sketches about his experiences. The originals were destroyed but he was able to later recreate them. Very moving seeing these powerful records of Japanese cruelty toward their American and Philippine 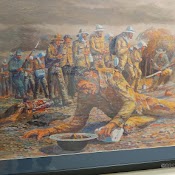 prisoners. Rob’s uncle, now deceased, was a Bataan Death March survivor and eventually spent 3 and a half years in an Osaka, Japan prison camp.

In March, the annual Bataan Memorial Death March is held on the Missile Range. As stated on their website, it is “26 miles of high desert, 26 miles of pure perseverance” and a way to honor the heroic service members who defended the Philippine Islands during World War II, sacrificing their freedom, 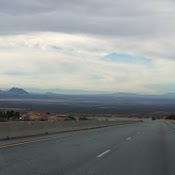 health, and, in many cases, their very lives for our freedoms. April 9, 2017 marks the 75th anniversary of the Bataan Death March.

After spending several hours here, it was time once again enjoy the beautiful scenery as we headed back to our coach. Even if you are not a military weaponry buff, visiting the Rocket Garden and the Museum was worth a visit. And the best part is that it is all free!