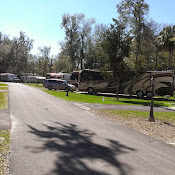 After we arrived at Williston, the weather took a nosedive.  Friday was cool and overcast so we headed into Gainesville to go to Sam’s Club to pick up a few items.  Since we’ve been full timing, it seems that we are constantly stopping at grocery stores, Sam’s or BJ’s Wholesale Clubs. 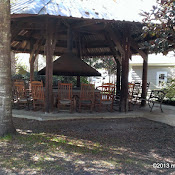 Not sure if that is a result of my being disorganized (I do keep lists but often forget to add an item to it) or my very slow adjustment to having less storage space. Although we have quite a bit of storage on board, it’s obviously a lot less than what we had in the house. The days of buying bulk items are gone – did I ever really need a 6 pack of kidney beans???  At any given hour of the day, one of us is asking “do you know where I put….” and “do we have any of…” questions. Probably over time this will get better but right now these questions often result in a somewhat frustrating search inside and out. 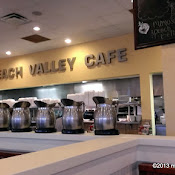 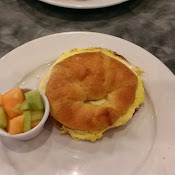 breakfast.  I had the Cafe Croissant – two eggs scrambled with shaved ham and creamy brie cheese on a warm griddled croissant which was delish.  Rob had a bacon and cheese omelet also very good.

On another rather dreary day, we took a ride to Ocala which is about 25 minutes south of Williston.  Such pretty countryside around here.  No oranges or strawberries but lots of sprawling horse farms. Ocala is in Marion County which is one of the major equestrian thoroughbred centers of the world. It has more than 1,200 horse farms, including about 900 thoroughbred farms, totaling some 77,000 acres. According to Wikipedia, Ocala is well known as a “horse capital of the world.” This title is based on the annual revenue  of $2.2 billion produced by the horse industry and the 44,000 jobs are created by the breeding, training and related support of the local equine industry. 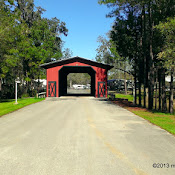 We got a late start the day we went to Ocala so we skipped breakfast and stopped at a Cracker Barrel for lunch.  It’s been years since we’ve been to a CB, not for any particular reason we can remember. 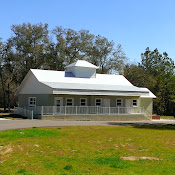 Wednesday’s special was a chicken pot pie for $5.99 which we both ordered.  Really good and a great price, but a lot of it so we both ended up taking half of it home.  After quick stops at Sam’s, Publix and Home Depot, we made it back to the coach before the rain came. 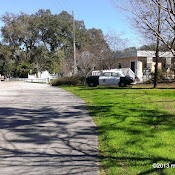 When we haven’t been out shopping, we’ve been spending our time bicycling and walking around the resort and hanging out.  Rob gave the RV and van a bath and has managed to complete a few small projects and do some minor repairs.

On Monday, the 10th, we made an excursion to Cedar Key but I’ll cover everything we did there in a separate post.